Have you ever wished you could read someone’s mind? Or telepathically communicate with them? You’ll feel like you can do both within the confines of The Mind, a brilliant little card game from Wolfgang Warsch and Pandasaurus Games.

The concept of this co-operative card game for 2-4 players may seem simplistic or trivial, but it’s one simple caveat that turns this from a good game into a great game:  players are not allowed to directly communicate with one another in any way.

This unique, special little game plays in 20 minutes or less and acts as both a main course for board game nights and as a palette cleanser, perhaps after some heavier games have hit the table. It takes less than 5 minutes to teach and, in my experience, you rarely only play one game once it gets going.

The Mind doesn’t really come with a whole lot of components, and that’s not a negative, just a fact. Inside you’ll find 100 cards from 1-100, 12 level cards, 5 life cards and 3 throwing star cards. That’s the entire game. Its portability and tiny size make it a great choice for trips where space is an issue or even for train or plane rides where you’re looking for something fun to pass the time. It’s the perfect game to throw in your pocket before heading over to a gathering.

In terms of artwork, there’s nothing wrong with any of it, but it’s also nothing special. The 100 number cards don’t offer much flair, with giant numbers for all players to read and smaller ones in the corners that are perfect for sorting your hand. This isn’t exactly the type of game where you’re coming in expecting extravagant artwork or beautiful visuals, though, so I didn’t really mind the generic, simplistic approach. 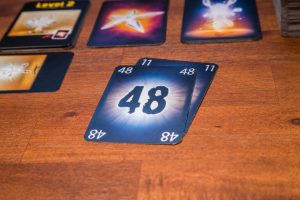 Theme lovers might find themselves disappointed. There isn’t really much here, as you can imagine with this type of game. An odd rabbit character features on all the life cards and the box art, though I never really was able to discern a purpose for this character. Whether it’s an inside joke on the part of the designer or meaningful in some way that I’m not picking up on, I’m not sure, but there really isn’t a theme here at all when it comes to the artwork. This never bothered my gaming groups and I feel like even if it had, it would have gone ignored or unnoticed given the nature of the game.

A minor note: this is definitely a game you’ll want to consider sleeving. Constant shuffling will lead to scuffs or marks on cards, especially identifiable or noticeable ones, which can ruin some of the experience if someone can tell what someone else has in their hand.

In several ways, The Mind is a sort of spiritual successor to The Game, a 2015 Spiel Des Jahres nominee. But where The Game solely revolved around the idea of playing ascending numbers in strategic fashion as its foundation, The Mind uses that concept as a piece of a wholly different foundation: reading each other’s minds. After a few sessions of The Mind, you realize that playing the cards is just the mechanic chosen to highlight the real beauty of this game.

The design and mechanics of The Mind are essentially there to facilitate interesting player connection and interaction. The majority of your time will be spent reading other players’ body language, discerning information by how long they wait to play cards, and calculating when it makes most sense to take a risk or to play it safe. The genius of this design is that every group of people you play with will feel a little different. Everyone will have a slightly different playstyle; some players will be more risky or forthcoming with playing cards, others will be more timid, reserved or scared of making a mistake. It’s your job to figure out the group you’re playing with and understand when it’s best to play your cards and when it’s best to wait. 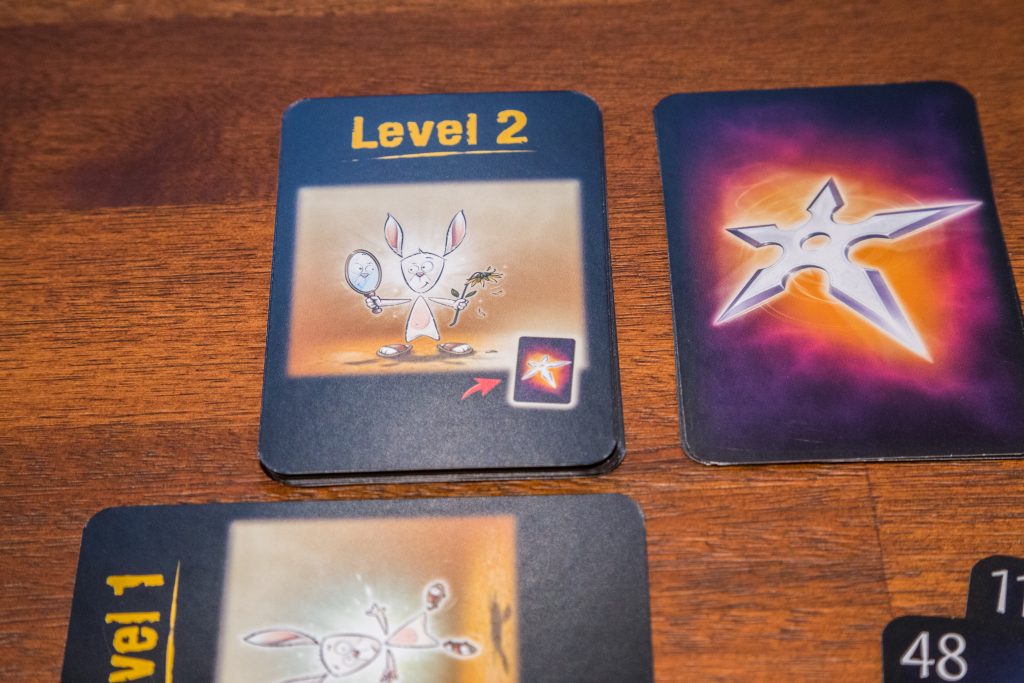 I’m sure it sounds like The Mind relies a lot on luck, and it does, but only on a surface level. When you start the first level, everyone has a single card in their hand. Unless someone has a very low card, there’s going to be a period of time where everyone looks around the table, wondering who’s going to take the chance and play their card and see what happens. And while a lot of The Mind will feel like this in the initial couple levels of your experience, it’s really in the later levels and second, third, fourth or tenth playthroughs where it starts to shine. Once you learn the nuances and tendencies of your group, you start to play smarter, and it feels all the more rewarding because of it. The Mind is essentially a platform to make you feel like you’re becoming mentally connected and linked with your friends and surprisingly, it actually works! So while there is definitely a luck element to The Mind that may turn off some people, as you play more, it feels less luck-based and more skill-based as you learn how to play with your unique, specific group.

The design and mechanics of The Mind are essentially there to facilitate interesting player connection and interaction.

The Mind is some of the most fun I’ve had with a light card game in a long time. It took me between 10 and 15 sessions across multiple different groups before we were finally able to beat the final level. When we did, it was one of the most satisfying and rewarding feelings I’ve had with a tabletop game. The more you play, the more you feel mentally connected to your friends and you’ll slowly see your results improving with each session. And because The Mind doesn’t feature actual turns, everyone can play a card whenever they want, there is no real downtime, which means that no one is getting bored or feeling disengaged, unless they happen to empty their hand first. But even then, watching the rest of your group try to finish out the level is a blast and you’re still able to vote on using a throwing star. 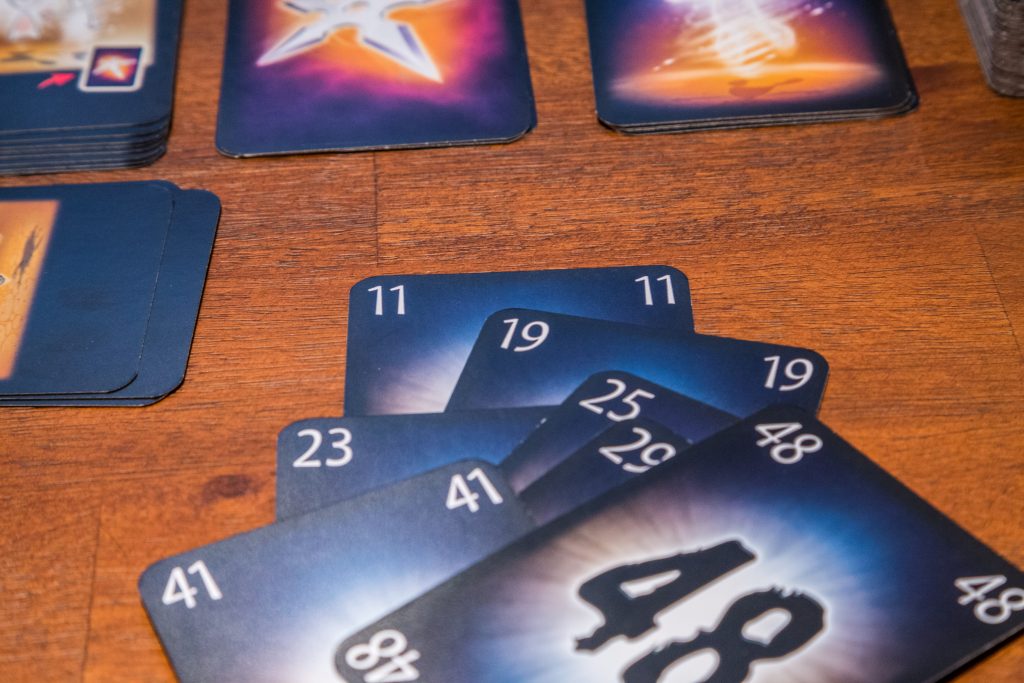 Also, there are so many important decisions being made by the group, all being made in silence: when to take a calculated risk with a few lives to spare, when to use a precious throwing star because you might be receiving one in an upcoming level, when to call for a moment of refocus so that everyone can catch their breath, when to eventually cave and play your number 98 card because you choose to believe the last card your friend across the table from you is holding is 99 or 100 and not 97. Never has a game made me feel so devastated when I make a wrong decision or so accomplished when I make a right one. And no matter the result, I constantly want to try again.

If there’s one major thing that can hamper your enjoyment of The Mind or keep you from having a good experience, it’s not having the commitment from your players to obey the rules. Games that ask for players to not make facial or verbal cues with other players can be contentious. If a player picks up their cards and groans, it doesn’t necessarily ruin the entire experience, but it’s giving information to all the other players that takes away from some of the skill required to play the game. Now I would know they likely drew cards that are all a distance away from each other or all grouped together in an unfavourable fashion. Likewise, nodding, winking, raising eyebrows or anything like that to each other will defeat the purpose of using only the power of your minds to try and find victory. In the wrong group, I could see this game not having quite the same appeal. But in my case, it was a fantastic experience. 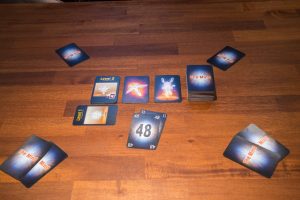 Also, if you’re not a fan of shuffling, find a friend who is, because you’ll be doing a lot of it. All 100 cards need to be shuffled after every level, and the first levels can go by quick. You might spend as much time shuffling as playing in the first couple of levels. Again, sleeving all your cards will make this less of a chore.

The Mind is some of the most fun I’ve had with a light card game in a long time.

This is a very inexpensive game that you won’t grow tired of anytime soon. If you’re constantly playing with the same group, you might find it slowly becomes a less interesting or varied option, but if you’re mixing in some different people often enough, you’ll want to keep bringing this little gem to the table. Plus, different player amounts feel very different and alter the number of levels for even more variety. Not to mention an expert mode for once you become a true telepath. You basically dictate your own replay value with The Mind. The more you play it with new or different amounts of people, the more it’ll feel new and fresh.

After a while, the concept does have the potential to wear thin as it’s pretty one-dimensional in terms of its actual rules. But again, it will completely depend on the group of people you play with. Really, for such a low barrier of entry and such a fun experience, it’s hard to go wrong. 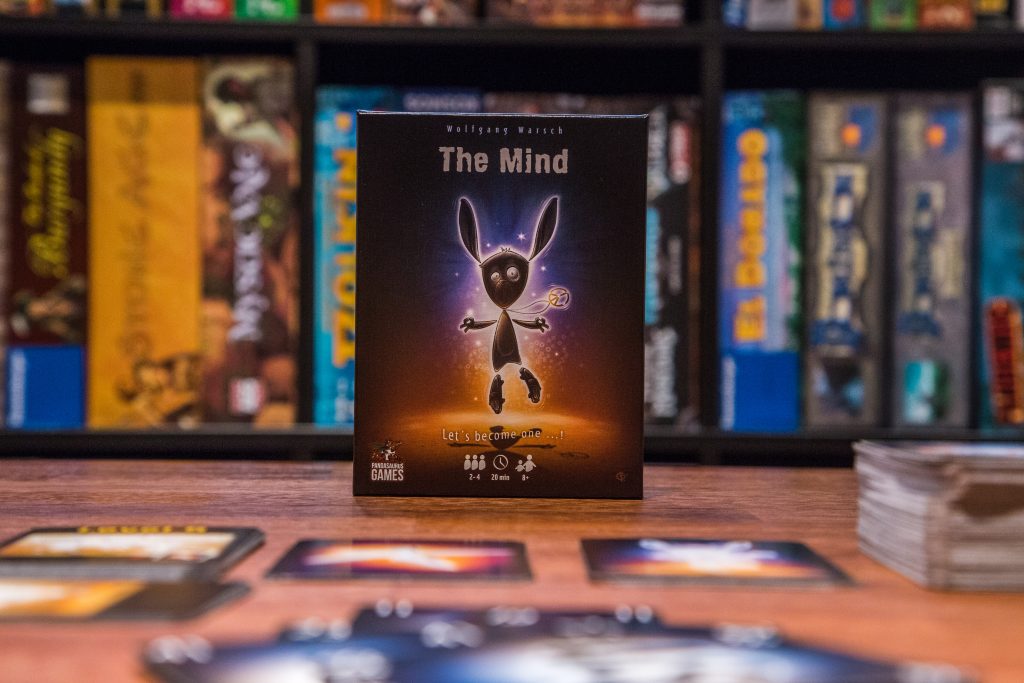 I was instantly ecstatic about having The Mind in my collection. It’s different, completely unique and all kinds of fun. When you finally beat the final level with a 4-player group, you’ll feel such an immense sense of accomplishment and it’s really hard to stress how rewarding of a feeling The Mind gives you. There’s not much to it in terms of components, artwork or theme, and the simplistic rules might turn some people off at first, but the genius of this game is in its ability to turn the way you interact with and learn about your friends into the real game.

Artwork and Components
7.5
Design
9
Fun Factor
9
Value
9.5
9.1
The Mind is a brilliant light card game with a very low barrier to entry that will deliver endless amounts of laughter and fun. It takes a simple concept and uses it as a platform for introducing the real game, which is how well you can learn and adapt to the tendencies of your playing group and in the end, how well you can read their minds. Every gaming group should have this fantastic game in their collection.
Reader Rating: (0 Rates)
0