As roll-and-write and flip-and-write games continue to flood the board game market as a popular trend, naturally it takes more for games to stand out from the crowd and earn that coveted spot on a gamer’s shelf. Cartographers from Thunderworks Games aims to set itself apart by infusing tried and tested flip-and-write mechanics with a fantasy theme and a hook that will have Dungeons & Dragons players especially excited: map building. While it ultimately doesn’t quite achieve the upper echelon of the genre, it does carve itself a nice plot of land on the board game landscape with its unique take and I’m always happy to come back to it. 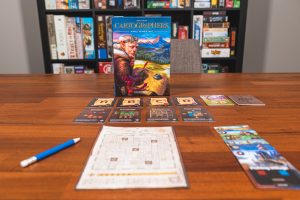 As with most games in this genre, there isn’t a whole lot to talk about in terms of components. The  available maps to select are what you’d expect to find in the box, but they’re nicely designed and a joy to fill out. The cards are the only other real component and while the artwork won’t necessarily be winning any awards, it does feature that Roll Player charm present in all games in the series. The landscapes featured on the Explore cards pop off the table with some nice colours and are especially nice to gawk at the first few times you play. However, after several plays, I never really found myself as entranced by them and really only referred to the terrain and shape section by the time game five or six rolled around.

My favourite part of the game to spend the most time admiring was the map I had drawn myself. This is one of those games that’s actually very interesting to look back on when you’re done a session, or even many sessions in the past, to admire the way you drew a map and how it looks from an aerial perspective. To take this to the next level, I’d recommend using pencil crayons and adhering to the terrain colours as well as symbols. The finished maps are especially gorgeous when drawn this way.

Drawing polyomino shapes in a flip-and-write is by no means a new concept. A game like Second Chance utilizes a very similar mechanic, albeit on a much simpler scale. However, it’s the combination of this mechanic, paired with specific terrain types and  seasonal objectives, that makes this design come together so well.

My favourite part of the game to spend the most time admiring was the map I had drawn myself.

One of the reasons I adore the game Isle of Skye is because of the way it introduces new objectives each time you play, but also aligns them with different rounds each time. In this way, even if you have the same objectives from game to game, the order of the objectives can make the game flow entirely differently. Cartographers utilizes this design philosophy to great success with its Edict cards. While each stack of Edict cards is fairly thin, I found that even when I played with the same objective, its position in Spring compared to, say, Fall made for a very different game flow. This is something I really value in board games and it made Cartographers feel like it held new discoveries to be found each time I played. 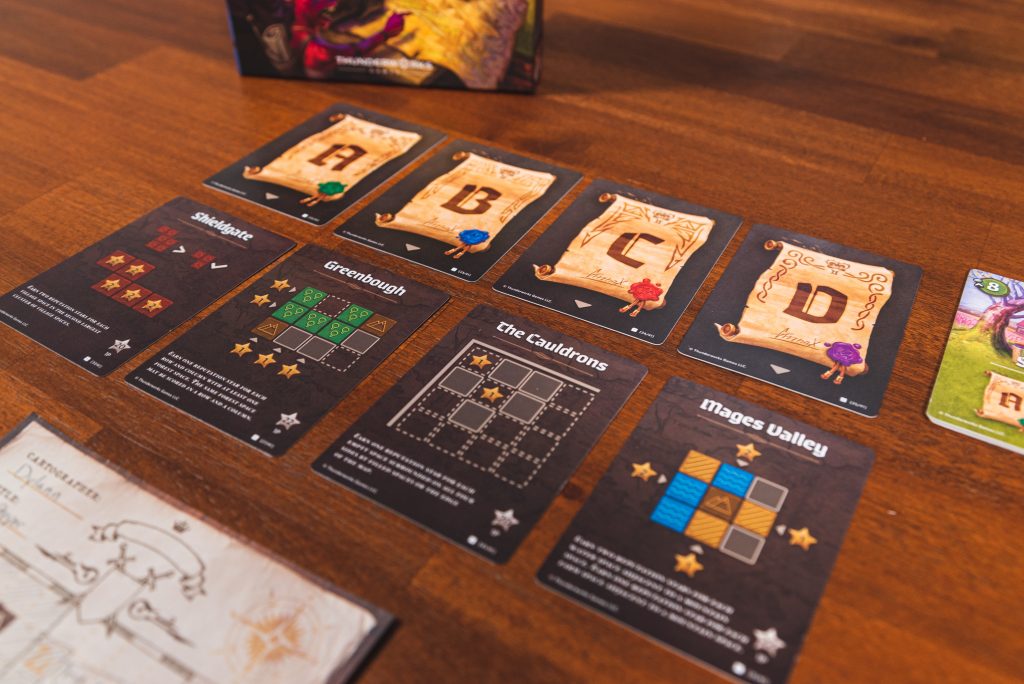 While the relatively small amount of Edict cards wasn’t an issue for me, the limited amount of card options is actually a common theme in Cartographers and one that’s a slight bit more of a detriment in other areas. For example, I found this game could have benefitted from more Explore card options. It only took a couple plays of Cartographers to see them all and I felt the game needed a bit more variety in this area. Looking at Second Chance again, there are many more card options and I felt like had Cartographers had even double the amount of Explore cards, each game would have felt a bit more challenging and less predictable. More cards would go unseen each game and strategies would have to rely on unfolding as the cards were revealed. As it stands now, even though not all cards will come out each season, a few plays of the game will allow you to know generally what to expect, which shapes show up with which terrain, and ultimately, you can anticipate your game plan well in advance of cards flipping over.

My small issues with the card pool never once made the game any less fun; Cartographers is always a blast. There are constant tactical decisions to be made each round as you adjust to seasonal Edict cards, while also prioritizing gaining gold and surrounding mountains. You also have to be prepared for the inevitable arrival of Ambush. Simply put, I always have a smile on my face when playing Cartographers. 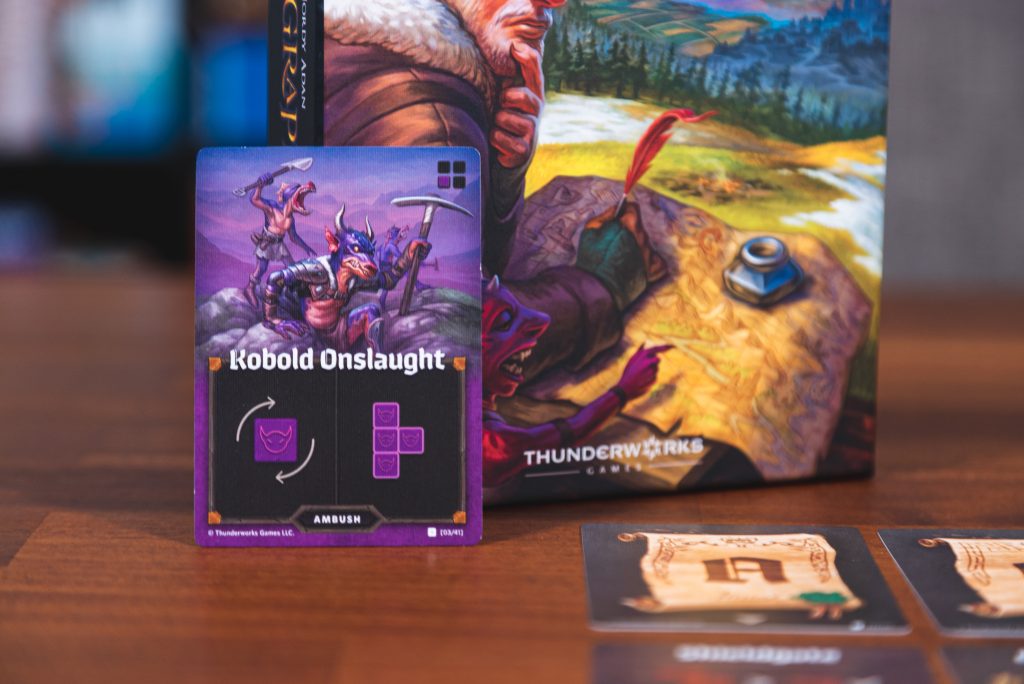 Speaking of Ambush cards, I appreciated this small injection of player interaction. This is very much a game where everyone does their own thing and plays mostly independently. However, allowing players to draw on each other’s maps, forcing them to deal with monsters to avoid too many negative points, is a much-needed addition and a very welcome one. This mechanic never took away from the fun by feeling too mean. In fact, it usually made things more fun for me as I tried to continue to carry out my strategy to completion, while now also dealing with the monsters that my opponent had laid for me.

Finally, going back to the Edict cards, I can’t stress enough how much the variety from game to game lends to the overall enjoyment. Each game I was excited to flip the Edict cards over and discover what I’d be scoring for and then try to formulate some kind of plan to reap the most points possible. The Edict cards aren’t too difficult to achieve, but they aren’t overly easy and end up giving just enough of a challenge to feel rewarding. A few can be more difficult than usual if they end up on the first season of the game, but this just ended up feeling like an extra challenge posed to the player. Can you tackle this more difficult objective early and take a quick lead over your opponent? Or will you ignore it for now and wait for Winter to ultimately cash in big?

Cartographers is always a blast.

Roll-and-writes are known for having pretty high replay value at a fairly low cost and Cartographers is no exception. It doesn’t demand very much of your time, although it’s a bit more than the average for the genre, and it’s pretty inexpensive as well. The Edict cards give you extra incentive to come back many times over, and after having played this game over a dozen times, I can safely say that I have yet to play two games that feel identical. There were always enough changes to make each game feel fresh. 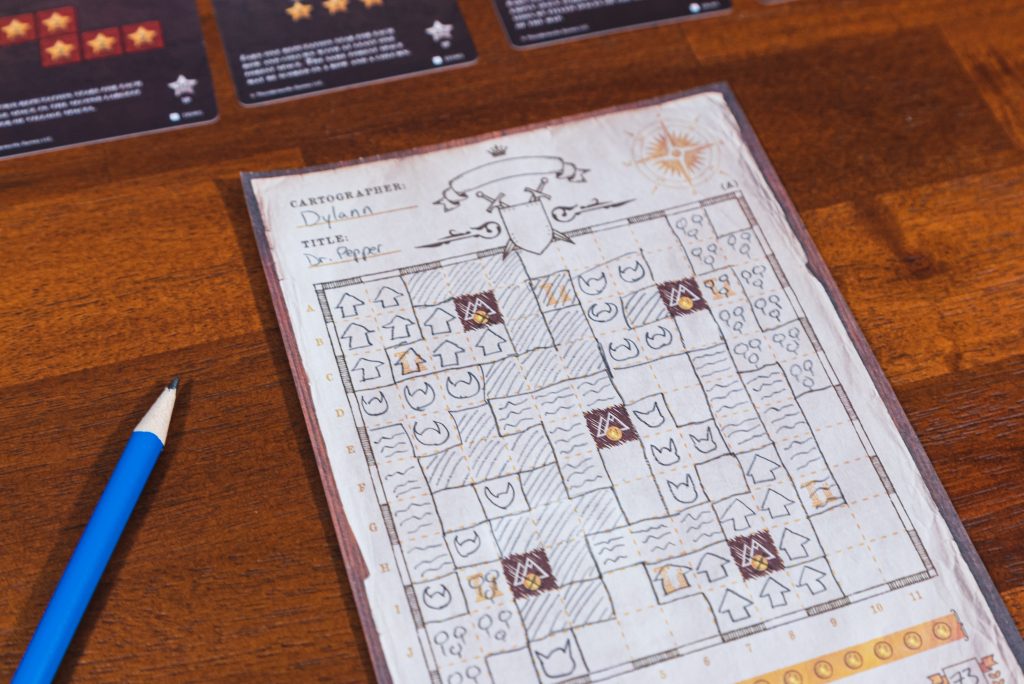 The only thing I would have liked to see was more; more Explore cards and especially more Ambush cards. This is a fairly weak criticism overall, as any game that leaves you wanting more is doing something right. I just felt like in comparison to other small games with similar concepts, I was expecting slightly more options to keep things feeling as fresh as the Edict cards. 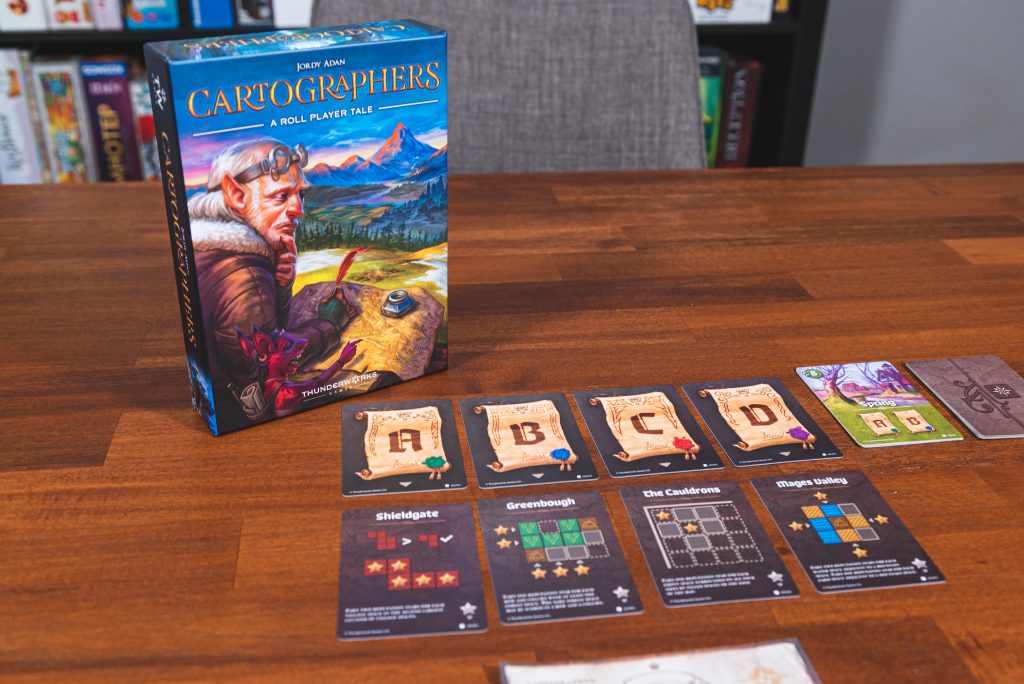 Ultimately, Cartographers is a worthy addition to a crowded genre. It successfully mashes the Roll Player fantasy theme with flip-and-write mechanics and provides enough reasons to come back time and time again. The theme of being a cartographer is fully realized as you slowly craft your own unique map and it’s a ton of fun to look back on your creations and admire your work, not just your score. While the Explore and Ambush card pools are a little light, it says a lot about the game that one of my main issues with it is just that I wanted more of it. Hopefully there will be some more expansions or add-ons released in the future to help pad some of these areas a little further.

If you’re looking for a new, slightly meaner option to scratch your roll-and-write itch, Cartographers is one you definitely won’t want to let sneak under your radar.

Artwork & Components
7.5
Design
8.5
Fun Factor
8.5
Value
8
8.4
Cartographers finds a way to shine through amongst a sea of other games in the genre with its unique theme and perfect implementation of it. The variety of the Edict cards provides a ton of replay value and the maps you craft are a joy to look back on after you’re all finished. This is a worthy flip-and-write game that delivers a surprising amount of tactical decision-making and just the right amount of player interaction to keep things interesting.
Reader Rating: (0 Rates)
0

All You Can Board@AllYouCanBoard·
2 Jul

Are you looking to learn how to play #Cloudspire? This is a massive game and there's a lot to unpack so let us help with our new video tutorial! Watch it below and hopefully it helps you get Cloudspire to the table a little bit quicker!