Thank you to Stonemaier Games for sending us this review copy of Charterstone.

NOTE: BEWARE OF MINOR SPOILERS BELOW. AS THIS IS A LEGACY GAME, WE WILL AVOID DISCUSSING ANYTHING THAT WOULD RUIN THE EXPERIENCE FOR ANYONE WHO PLANS ON PLAYING CHARTERSTONE.

It’s an unfortunate time to be in the middle of a legacy game like Charterstone. Dylann and I played through the first 5 sessions (from a total of 12) before we started social distancing. Even though we could continue playing over Zoom or Skype while one person manages the board and components, it wouldn’t be the same, so we agreed to wait and continue this once we can meet up again. We don’t want this legacy experience to be sullied by having to play from separate homes.

Once we can get back to playing games together, we’ll finish the campaign and Dylann will have a full review of the game. 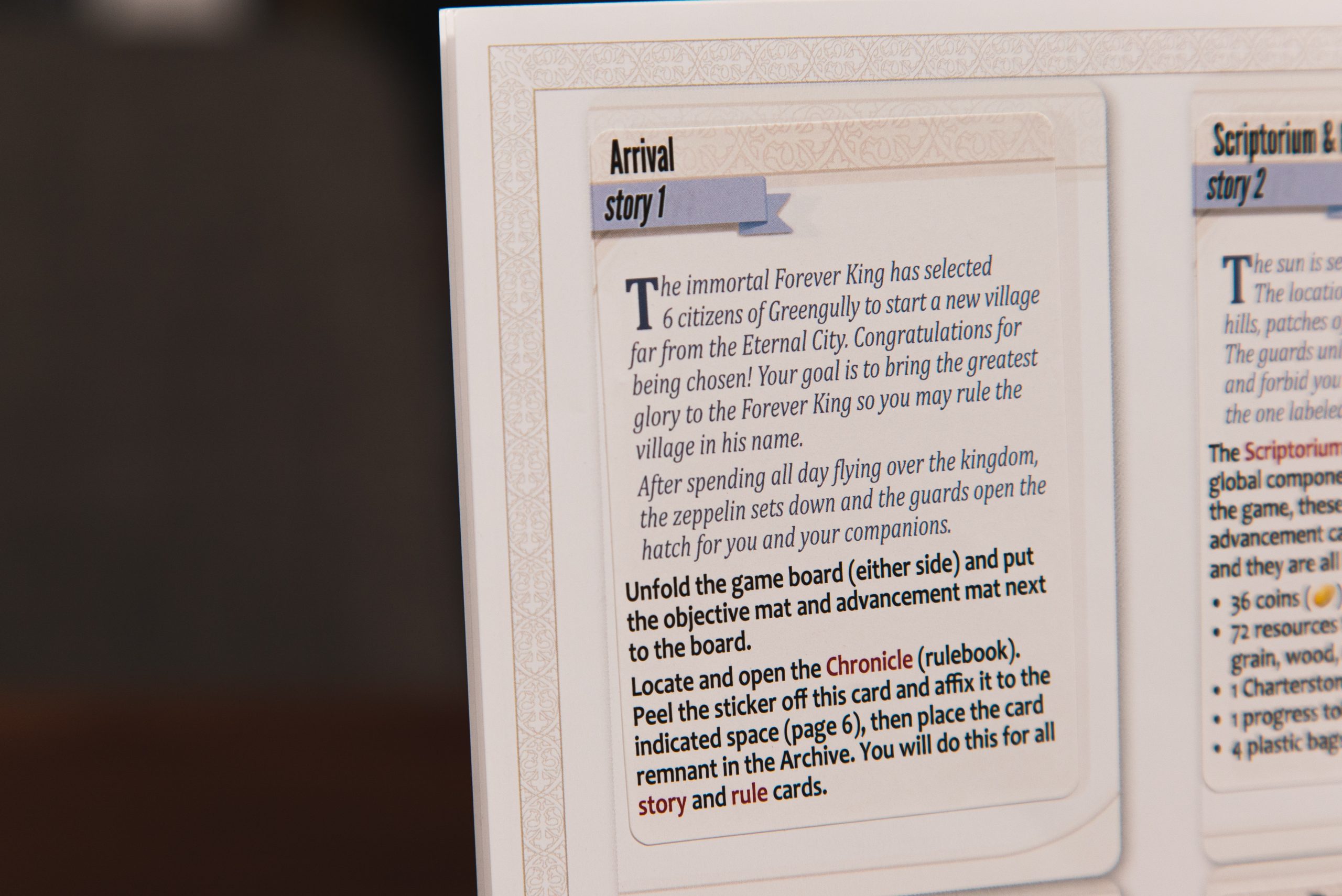 My only prior experience with a campaign style legacy game was Gloomhaven, which I thoroughly enjoyed. The thrill of all the unlockable classes and scenarios really drew me in, and although I wasn’t disappointed, I did eventually reach a stage where I lost the urge to play it. Once my group had unlocked all the classes and seen the majority of the items, even before defeating the final boss, I already knew the peak of my excitement and enjoyment with Gloomhaven had passed and would likely never return. I don’t really consider this a criticism, because I got hundreds of hours of enjoyment out of Gloomhaven, and plenty of fond memories peeling back the layers of that incredible game with some close friends.

After 5 sessions of Charterstone, I have mostly positive feelings, although I worry about whether or not I’ve already reached, or even surpassed, the peak of my excitement with it just shy of the halfway point of the campaign. I hope this isn’t the case, and with so much left to be discovered, I remain optimistic that the game has some exciting surprises waiting. 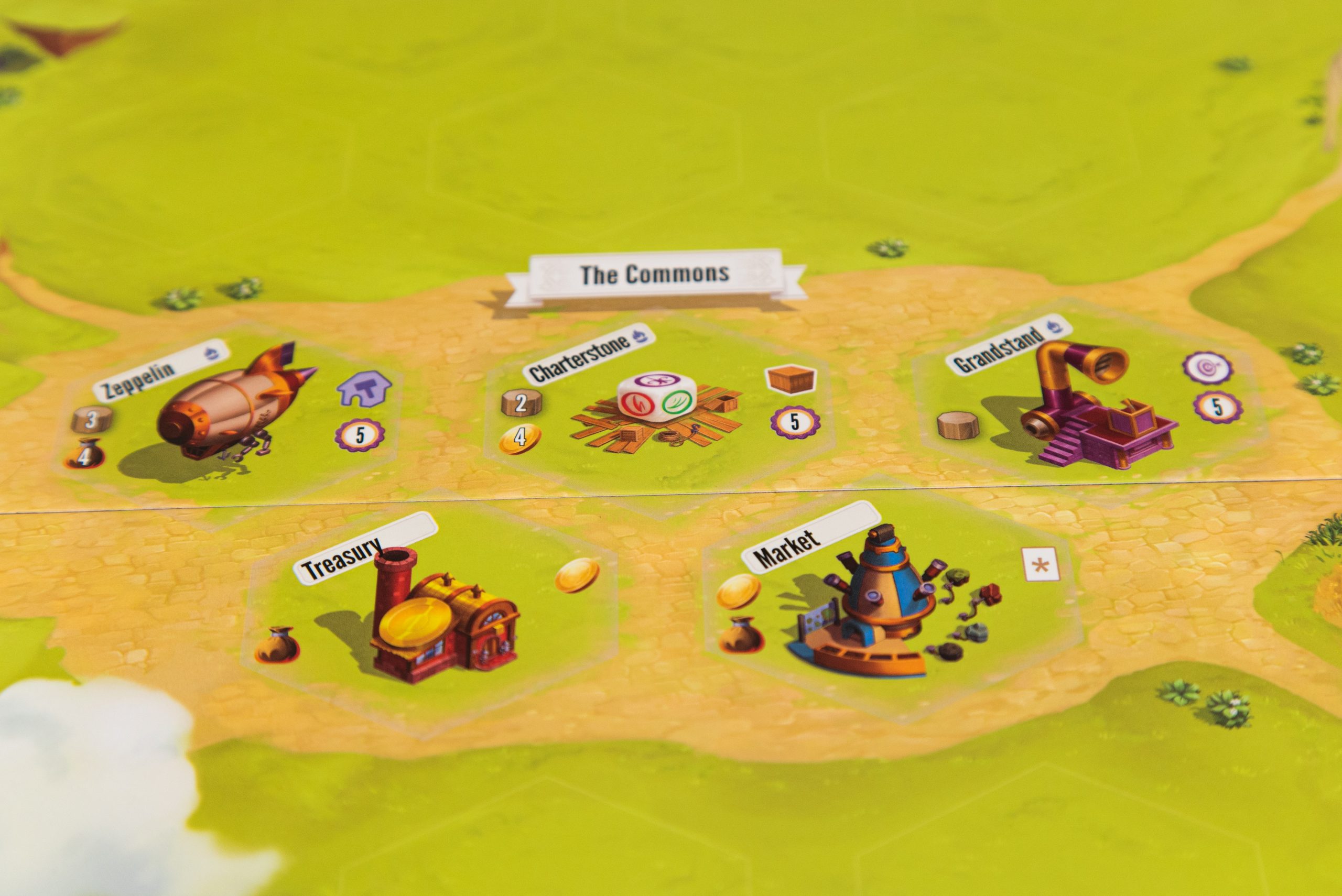 In Charterstone, you and your fellow players compete by constructing a shared village together over a series of 12 sessions. The artwork and overall aesthetic is so clean and welcoming. It’s a beautiful game, and all the white helps evoke that feeling of emptiness, waiting to be filled in. You start with an almost entirely empty village, aside from the spaces pictured above, and each player has their own charter where they can construct buildings. Stickers will be added to the main board to represent these new buildings, which will offer players new actions they can take. Each group who plays Charterstone will have a different board with different action spaces available. Once the 12-session campaign is done, you’ll have a completed board that you can use for a regular worker placement style game. 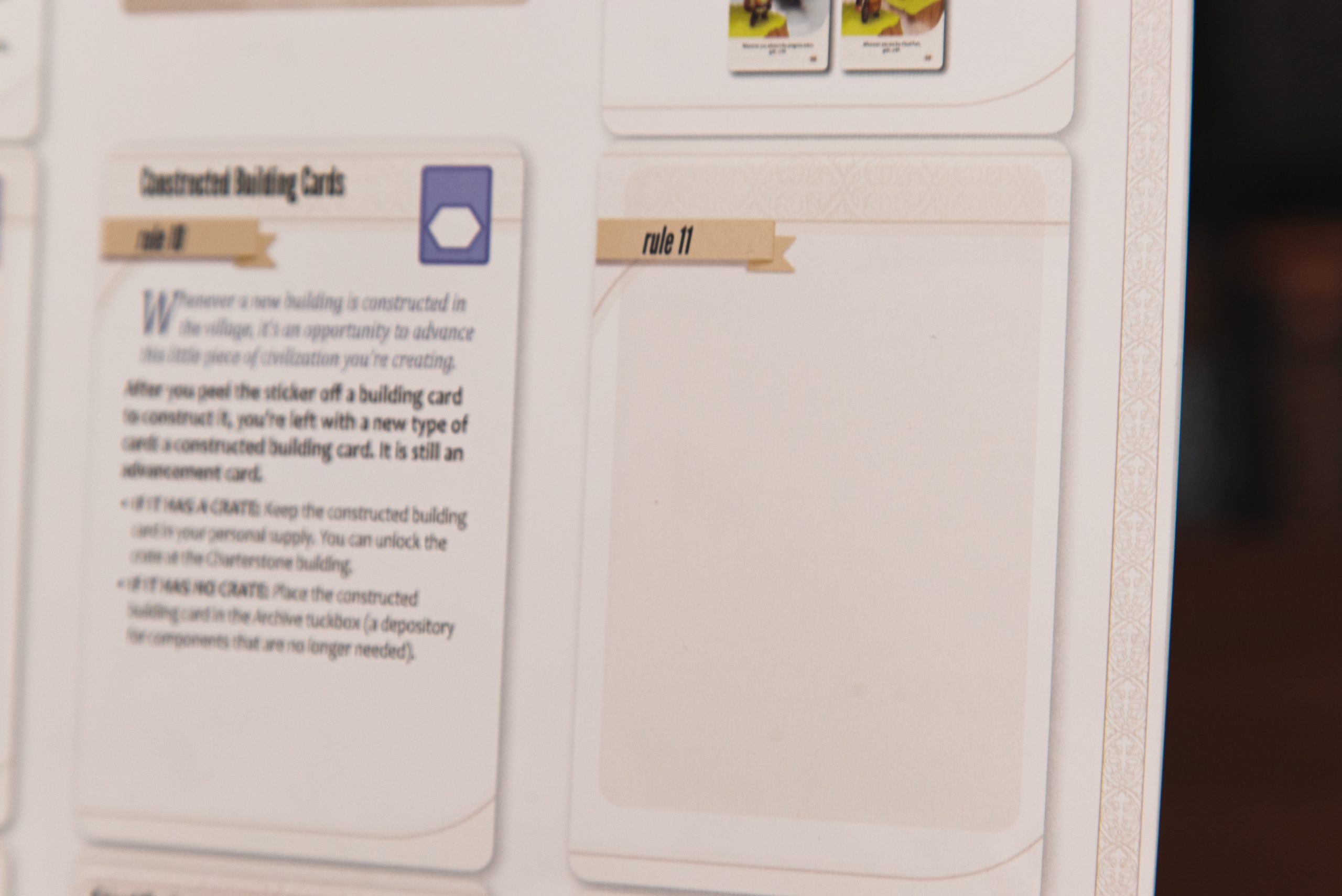 As with Gloomhaven, what I’ve enjoyed most about Charterstone so far is the discovery. You start off knowing so very little and seeing almost none of what this heavy box has to offer. With each passing game, new rules are added to the rulebook, new spaces are added to the main board, and there are even new goals and conditions that apply to each individual session. This all helps Charterstone feel significantly different each time you play.

The first game felt short and somewhat unsatisfying, but it also pulled me right into the Charterstone universe and I immediately wanted to play the next session. We played three in a row but we sort of had to restrict ourselves; I remember we really wanted to play more, and we had the time, but we wanted the Charterstone experience to last, so we decided to hold off. A few days later, we played sessions 4 and 5. More mechanics were introduced and the board continued to fill up with new action spaces. We had a great time once again, but when we parted ways after our last session, I already knew I didn’t feel quite the same about Charterstone anymore. I’m still eager to play, but less eager than when we started. 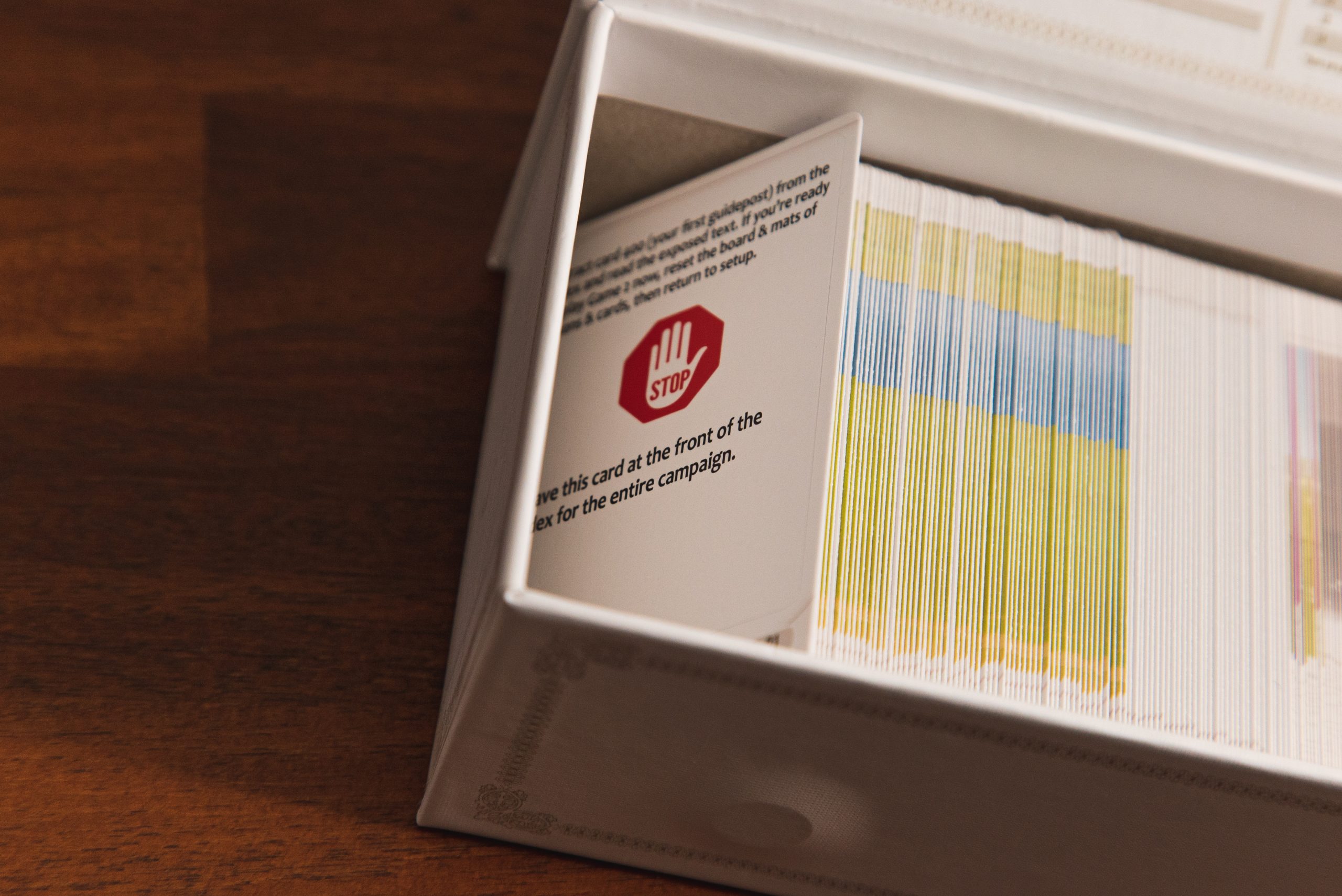 The Index box functions as a way to store all the undiscovered elements of the game, such as new characters, rules, action spaces, and more. The box has numbered cards, and throughout your time with Charterstone, you will be instructed to take a specific numbered card from the box and read from it. You never know what you’re going to get or how it’s going to change the game of Charterstone as you know it, but that’s where the game shines for me. There’s an undeniable allure to the unknown.

Watching the board grow organically, knowing that no other group in the world is having the same experience as my group, is something special. However, I can’t help but wonder if it’s the idea of the legacy game that appeals to me more than the legacy game itself. I’ve been so excited each time we need to crack open that Index box and read a new card, but so far the resulting effects have only sometimes matched my excitement. I’ve often been left with the feeling of, “oh well, the next card will probably have a bigger impact”, and I’m hoping that isn’t the norm with the rest of the cards we have yet to see. 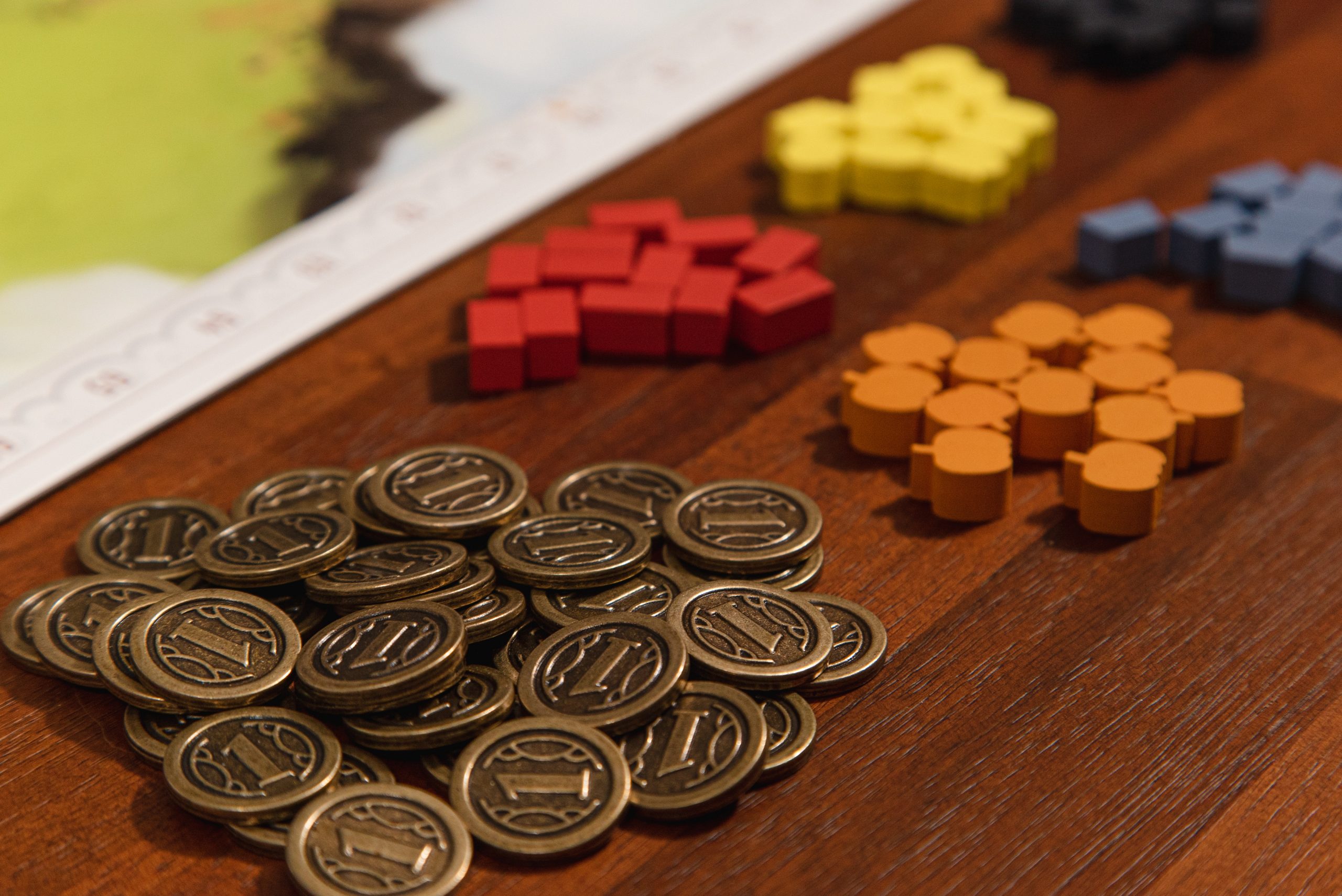 Is my group playing with action spaces that some other groups haven’t even seen? Are we all even playing with the same rules? Due to the variability, is the game balanced? If not, would the lack of balance truly hurt the game in the same way it would a non-legacy worker placement game? Is balance even that important to the overall experience of the campaign in a game like this? Will I want to play this as a regular worker placement game once the campaign is done?

I have way too many unanswered questions relating to Charterstone, and I can’t wait to get back to playing so I can have some of those answered.