Our first overview is for the Necromancer. 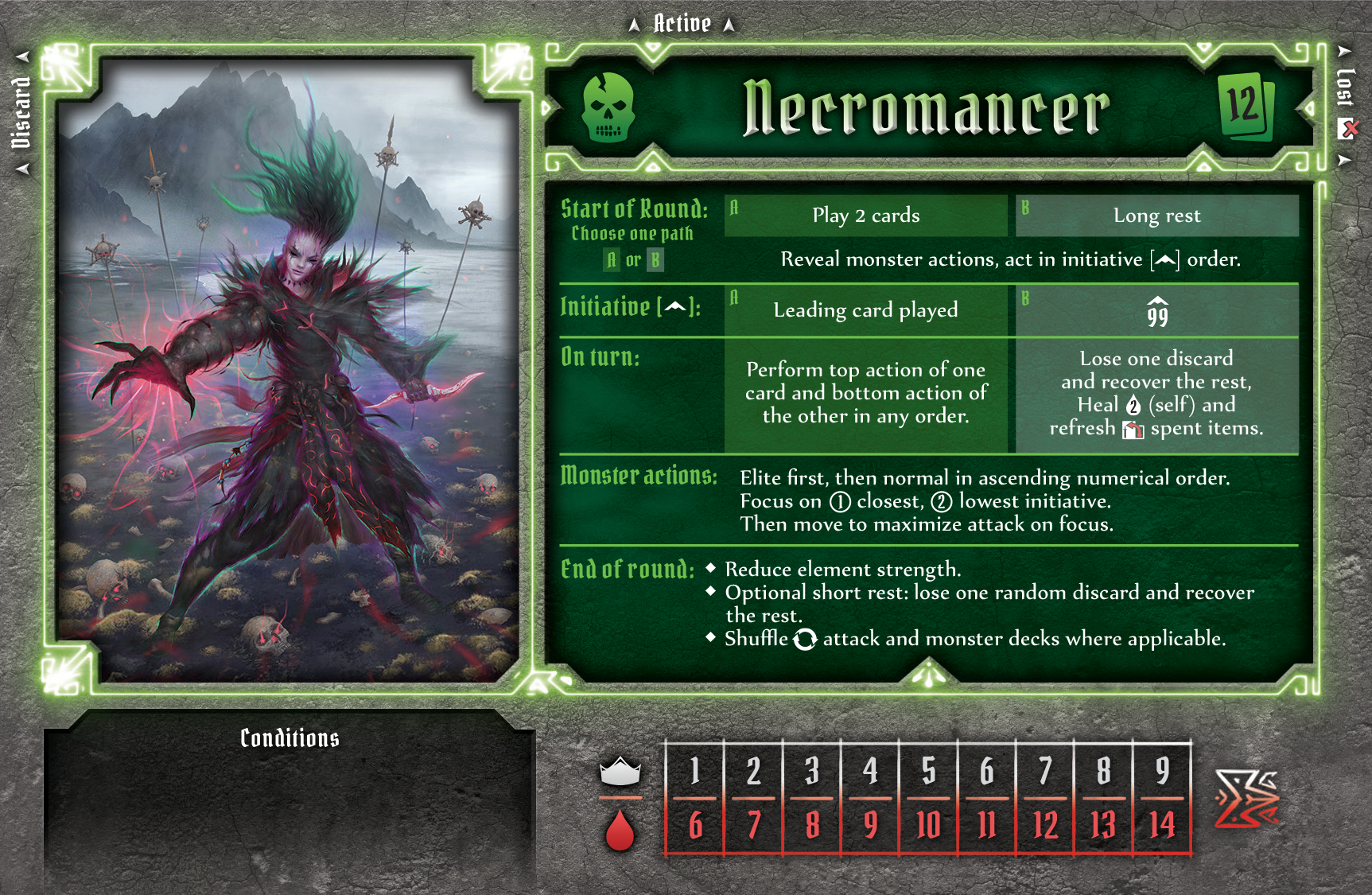 With low health and a 12-card hand, the Necromancer is a melee support class that starts slow and needs to take advantage of its summons, primarily the Skeletons, in order to succeed. The Necromancer can control its summons, moving them around and attacking with them in various ways. This class can also Heal, but it’s trickier than you’d think.

If we’re comparing Frosthaven to Gloomhaven, since the Necromancer is a starting class with the ability to Heal, of course the Tinkerer comes to mind. The Necromancer lacks the ranged attacks (especially AOE) and has less healing, but tries to make up for that with the ability to Curse, Poison, and do some tanking and obstructing with their Skeletons. This is not your traditional support.

Most of the Necromancer’s initiatives are either mid or late, with only a few early initiative cards available. Since this class is fragile and does almost exclusively melee attacks, the Necromancer will need to summon Skeletons early on to tank damage and also provide more opportunities and sources from which to deal damage.

Planning ahead is necessary because so many of your cards require you to either have a Skeleton or specific element in play, or to be positioned in a particular spot to maximize the potency of an attack. So every turn you need to consider what you’ll be doing with that element or that Skeleton on your next turn, or whether you can even risk getting up in melee range for an attack if you won’t have any early initiative cards left in your hand for next turn.

The more Skeletons and elements you have afloat from one turn to the next, the more options you’ll have and the more successful you’ll be.

The two Self Heals are situational; one requires having multiple summons in play to get a substantial Heal, and the other only triggers if an enemy dies that round after the card (Fell Remedy) was played.

The three ally Heals are also situational, as the top of Fell Remedy requires elements for maximum benefit, and the other two (Transfer of Essence and Willing Sacrifice) both make the Necromancer suffer 2 damage. Both cards have incredibly high potential but come with a steep price to pay by suffering damage and, in the case of Willing Sacrifice, losing the card for the rest of the scenario.

Next, let’s check out the summon cards.

At level 1, the Necromancer has four summon cards, three of which are Skeletons. Each time you summon one of these, you suffer 2 damage. At early levels, it’s a big chunk of your health.

Finally, let’s see the rest of the Necromancer’s level 1 cards.

Many of these play off the summons in interesting ways, my favourite being Exploding Corpse. I love cards like this. Thematically, it’s awesome, but it doesn’t feel overpowered. There are many situations where this card wouldn’t be useful, but, when used optimally, this can create a fun, powerful, multi-target attack.

Out of the 15 available level 1 cards, there are five top loss actions and five bottom loss actions. The 12-card hand makes this possible without feeling like you’re burning too many cards too early. 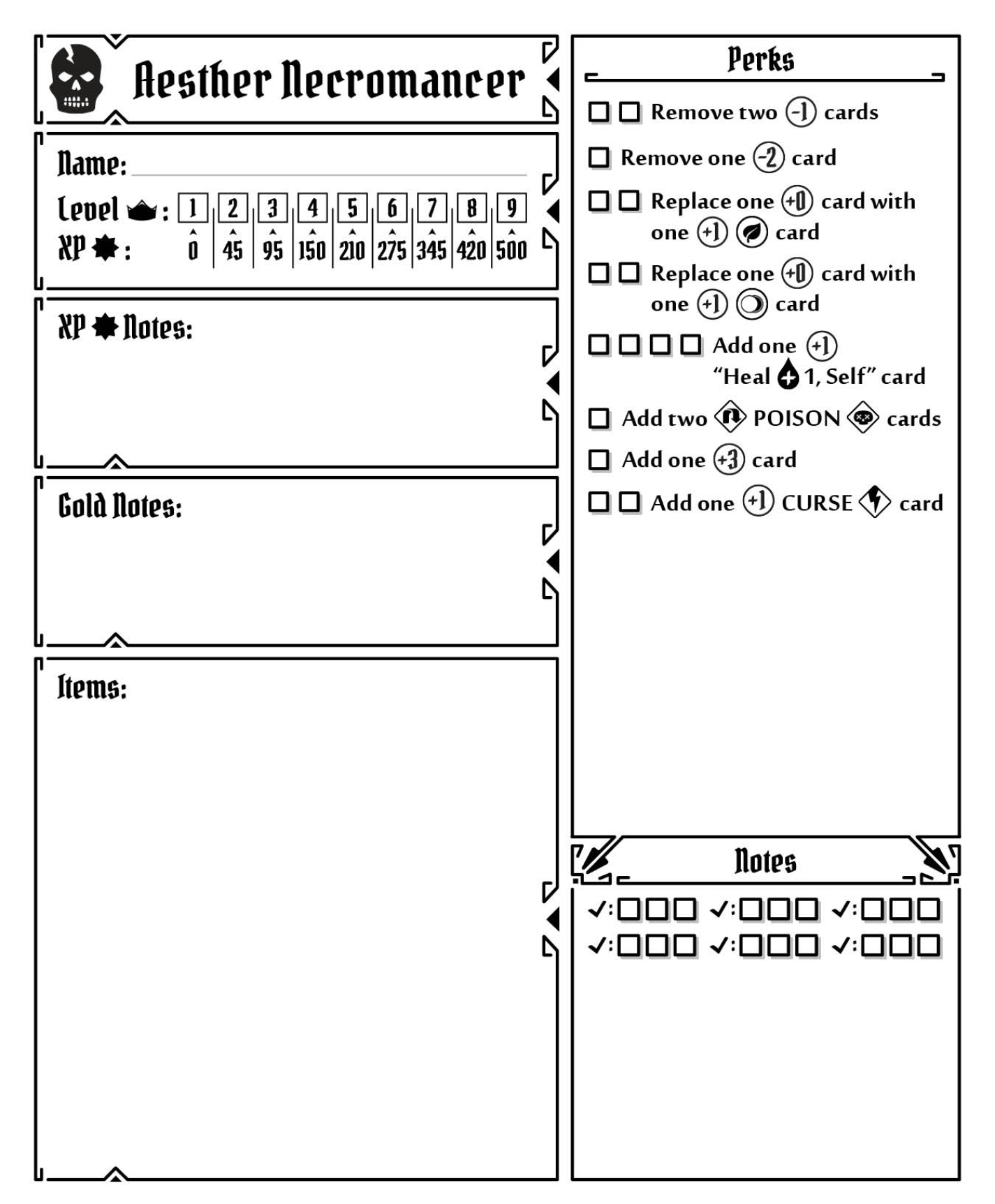 Although the perks for this class are pretty solid, there’s nothing all that interesting or innovative here. There are some much-needed Self Heals, along with a smattering of Poison, Curse, Earth, Dark, and some slight damage buffs.

The more Skeletons you have on board, the more often you’ll draw from your modifier deck. If you plan on playing a lot of summons and getting to attack with them, even just having a couple of those Self Heals in your modifier deck could go a long way in keeping you alive and removing that pesky Poison or Wound at a critical time.

I foresee a few major challenges with this class. 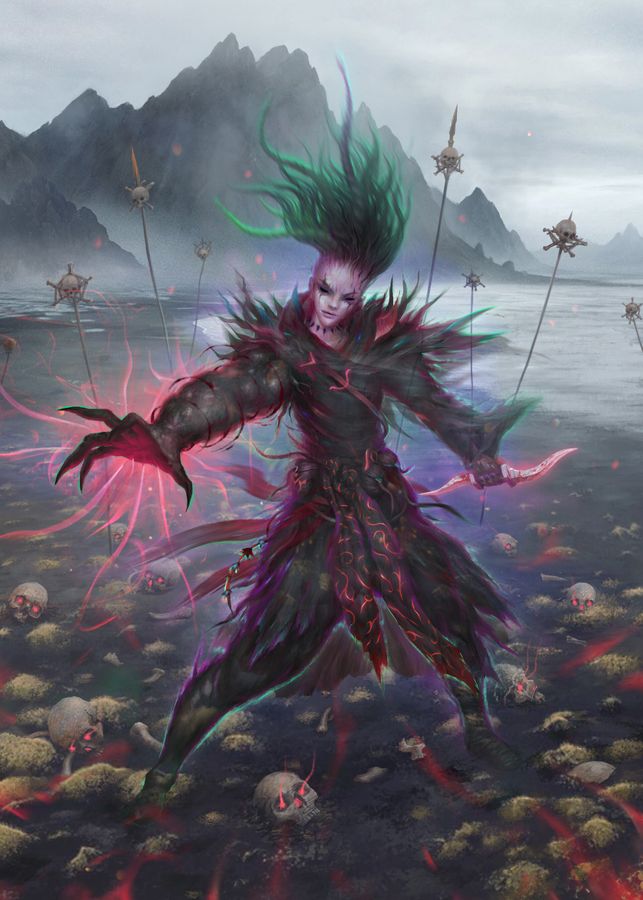 First, I think it will be a punishing class to start off with in groups of just two players, depending which class the other player starts with. Even though the Necromancer can summon Skeletons to do some tanking, the Skeletons only have 3 health each. Considering the Necromancer suffers 2 damage just to summon a Skeleton or Heal an ally, and the Necromancer starts with 6 health at level 1, that’s one third of your health. If you don’t have someone to tank or help with healing, a level 1 Necromancer won’t survive long with two situational Self Heals.

Regardless, due to mostly late initiatives and melee attacks, the Necromancer will often end their turn in a precarious position, leaving them at least partially exposed at the start of the next round. Items will go a long way in helping the Necromancer stay afloat when they struggle to keep Skeletons alive or get in big heals.

I think this class will struggle at low levels and at low player counts, but will likely evolve into a powerhouse as it gains items and increases its health pool.

Having a summon-heavy class as part of the starting six is surprising, but once you see what the other classes have in store, you’ll see the Necromancer will fit right in to kick off your Frosthaven campaign.