Feature
Home›Feature›Is the KeyForge: Call of the Archons Starter Set Worth it?

Is the KeyForge: Call of the Archons Starter Set Worth it?

The starter set for KeyForge: Call of the Archons was designed to be the perfect starting point for new players. To determine whether this package is worth it, we have to consider a few factors.

It costs roughly the same as four unique decks.

Who do you expect to play it with? Do you plan on teaching a lot of people? Will you play this often?

The KeyForge: Call of the Archons starter set will facilitate teaching the game and you’ll have all the tokens you need between two players. If you’ve already played KeyForge and don’t expect to teach many people how to play, you might not get much use out of the starter decks.

For board game café owners, it is absolutely worth owning, as many new players will simply want to pick up the starter decks and try it out. Same goes for libraries, community centres, and any other public settings in which board games can be played.

Ask yourself how much you want to invest in this game, and decide whether you’d rather invest that money in more unique decks or in the starter set. If you plan to eventually buy nicer custom tokens or use other ones you already have, it’s probably not worth it to pay the extra cost just for the starter decks. 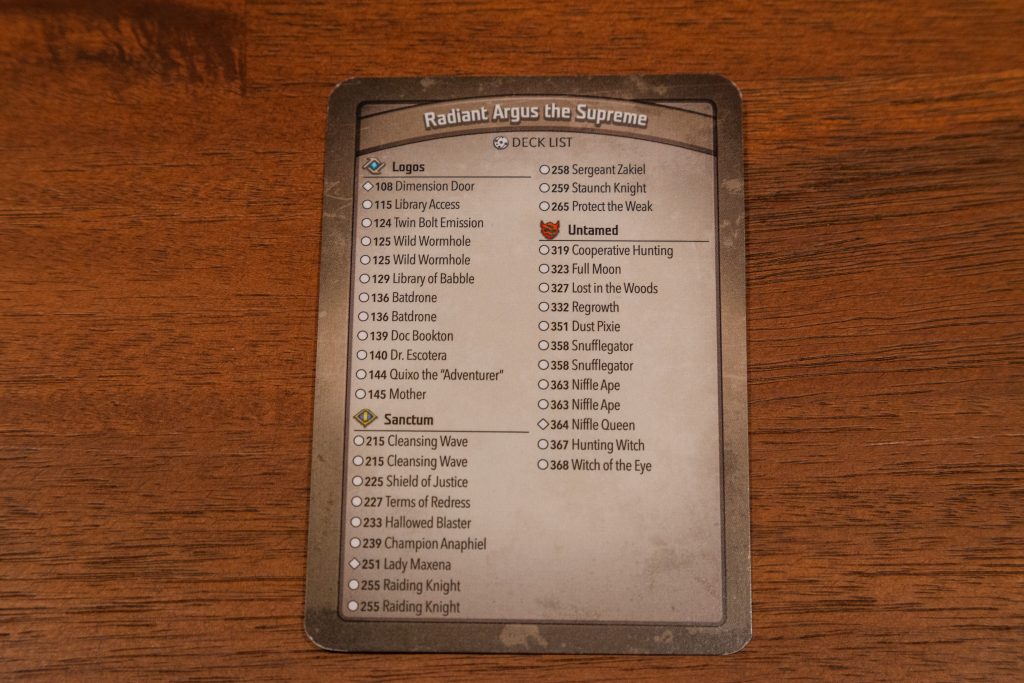 This deck has some strong Logos combos to go with a heavy Sanctum and Untamed creature presence. 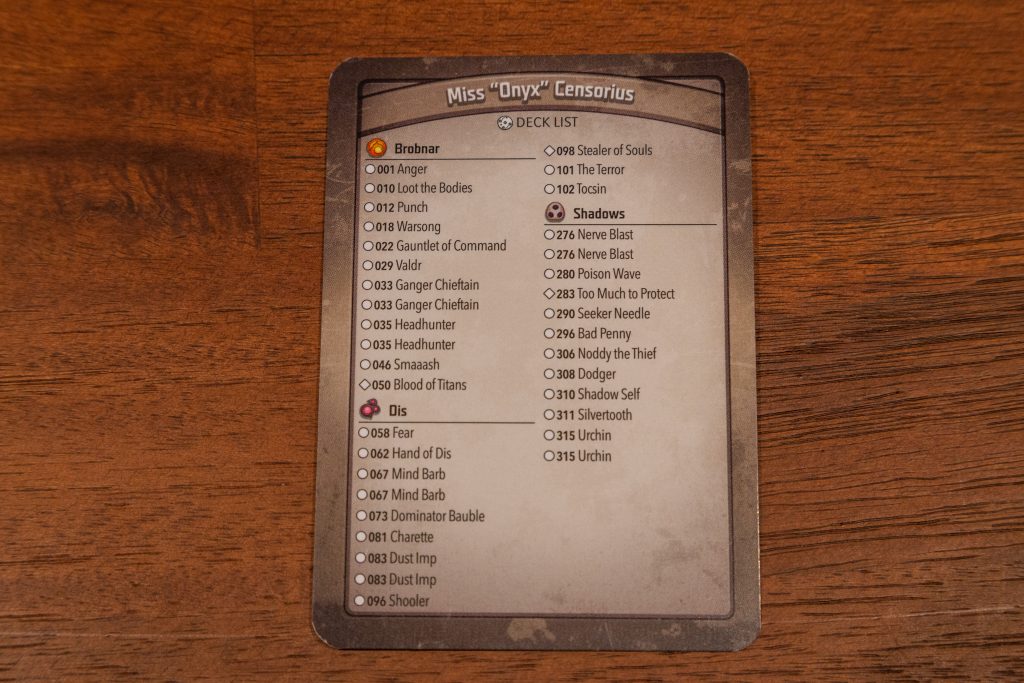 This deck works best when reacting to your opponent by disrupting their tempo or stealing their æmber.

The two starter decks – Miss “Onyx” Censorius and Radiant Argus the Supreme – are not unique and cannot be used in tournament play. They are mostly meant for introductory play and to show off some staples of the Call of the Archons set. The decks feel about equal in terms of power level and they play differently enough to give players a glimpse into what those houses can do. The only house not to be represented from Call of the Archons in either starter deck is Mars, which is a smart choice considering they are probably the most difficult to grasp at first due to their heavy reliance on combos.

Knowing the starter decks aren’t unique takes away some of the fun, but they are solid decks. Some people might use them once or twice the first time they get them and never use them again. I’ve used them a few times for teaching KeyForge and also lent the decks out to friends who wanted to play more before deciding to buy their own decks. For that alone, they have been worth it. 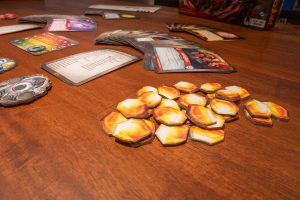 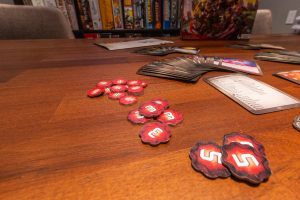 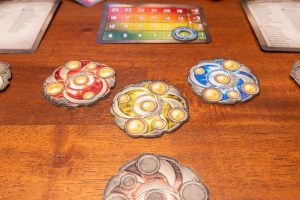 The quality of the components is fine, but nothing special. The official rules state that players have various options on what to use for damage tokens, æmber, and everything

else, as long as it is clear what the pieces represent. The tokens and cards are nice enough, but there are other options out there.

Unfortunately, this package doesn’t come with the full rule set, which is only available online. This seems like an unnecessary omission from Fantasy Flight Games, especially since the starter set is intended as an introduction to KeyForge for newcomers. The quickstart rulebook does not mention such mechanics as Archive, Purge, Hazardous, Omni, Poison, mulligans, and chains. The two unique decks you get might have cards with abilities that aren’t covered in the quickstart rulebook, so be sure to download the most recently updated official rulebook before playing. 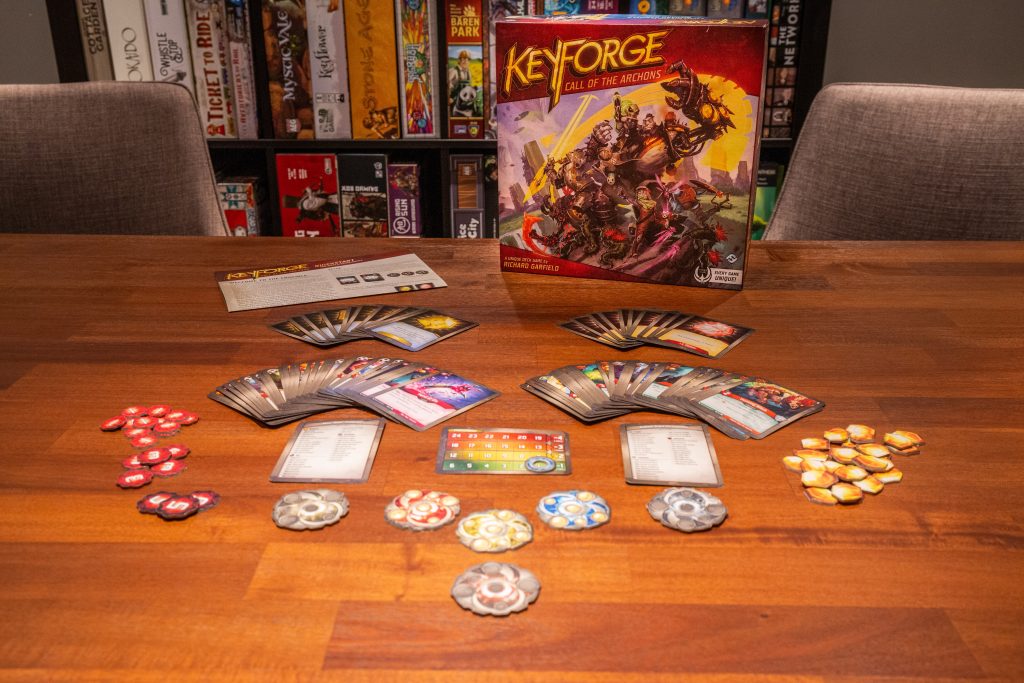 Æmber and damage tokens, power and stun cards, chain trackers, keys, starter decks, quickstart rulebook… but no full official rulebook. You’ll have to get that online.

The official rulebook should have been included, with a reminder that subsequent versions will be available online with important updates, and that players should always be using the most recently updated version. Even if just the Glossary from the official rules had been included, that would go a long way.

SO, IS THE STARTER SET WORTH IT?

We split a starter set for AYCB, and I have mixed feelings. I enjoy having all of the tokens, I’ve taught multiple people how to play using the starter decks, and I’ve also lent them out which has helped get other friends interested in KeyForge. Ultimately, it was probably worth it for me. Still, I have very little desire to play the starter decks myself, and I’ll always wonder what I might have opened if I had bought two more unique decks instead of the starter decks. Besides, there are newer starter sets for Age of Ascension and Worlds Collide with better quality tokens for a better price, without the starter decks. 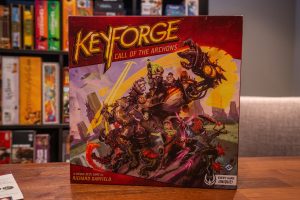 Overall, since the game has been out for over a year, you can probably find the Call of the Archons starter set at a reduced price, in which case I would recommend it. Between the three current sets (Call of the Archons, Age of Ascension, Worlds Collide), Call of the Archons is considered to be the most powerful set, and since no more decks from this set will be re-printed in the foreseeable future, you should buy this if the price is right.

The KeyForge: Age of Ascension and Worlds Collide sets remain better choices as a total package.