Top 5 Kickstarters We’re Most Excited About For October 2020

Another great month for Kickstarter projects means another occasion to reassess your priorities in life. I truly wish I could justify backing all of these projects, as they all bring something special to the table, but just like most great board games, difficult decisions must be made. Here are the top five Kickstarters from October that we’ve got our eyes on. 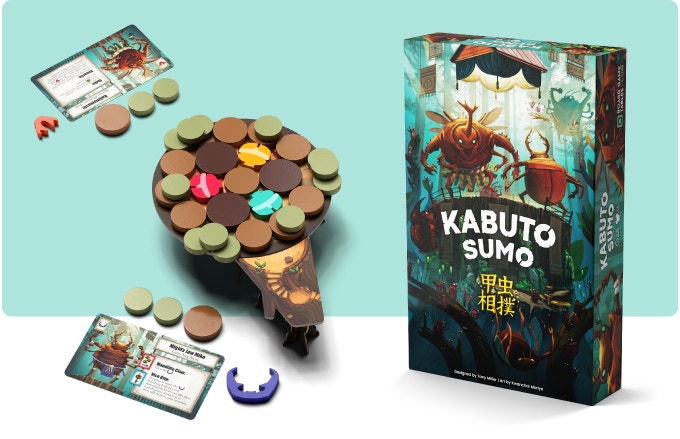 Have you heard of the World Insect Wrestling Championships held in Japan? I certainly hadn’t before, but they’re real, and I only know about them thanks to Kabuto Sumo.

This disc-pushing game for 2-4 players looks to emulate the World Insect Wrestling Championships by placing you in the role of an insect, fighting other insects to become champion. The goal of the game is to be the last insect remaining on the platform.

Each player picks an insect wrestler – the base game features a variety of beetles, but the expansion includes others such as a praying mantis – each one featuring a signature move (in other words, a uniquely shaped piece). Players take turns pushing discs from the edge of the board toward the center of the ring in an attempt to push their opponent(s) off the board, akin to a sumo match in which each wrestler is trying to push their opponent outside the circle.

If a player pushes a non-player disc off the edge, they add that piece to their reserve pile, which they can use as their pushing disc on future turns. There are discs of different sizes so you can tailor your approach based on the situation at hand, and you can even rotate the entry platform to choose which side you push the disc from.

The concept is intriguing, the artwork is phenomenal, and this truly stands out as something refreshing and different in today’s bloated landscape of board games.

The creators of Rap Godz (Board Game Brothas, Omari Akil and Hamu Dennis) are back with another stylish game unlike anything else out there. Hoop Godz is a 2-player head-to-head basketball game where each player picks a team of 3 ballers (from a diverse pool of 12) in an attempt to defeat their opponent by being the first to score 7 points. The board has hexes which show how many points you’ll score for draining a basket from different spots, similar to a real basketball court.

The game plays in 45 minutes or less and features an interesting JUICE system which limits what you can do and how much you can do on your turns. Between your basic actions and your action cards, you’ll move your ballers around the court, pass, shoot, steal, block shots, and more. Real-time dice battles dictate the outcomes of the actions you attempt, as both players frantically roll their dice simultaneously to see whose dice will display the required symbols first, adding an extra level of tension to an otherwise already fantastic idea. 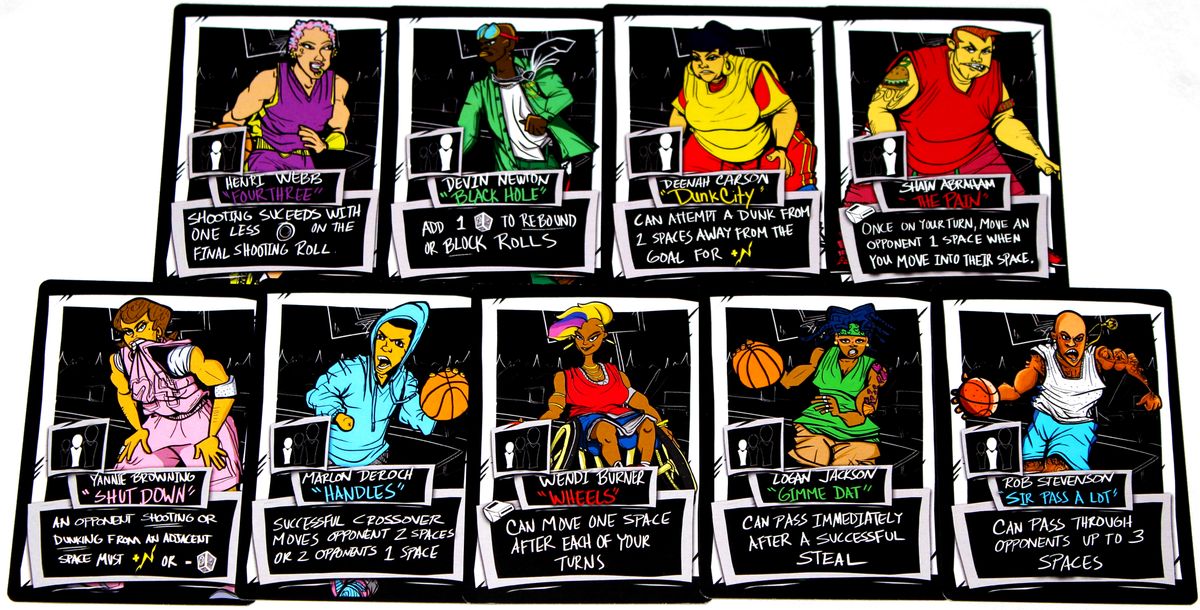 Each baller has a specific size and skill associated with them, leading to all sorts of combinations for you and your opponent to explore. Board Game Brothas produce the kinds of games they themselves would want to play, and you can really see that here. It’s also wonderful to see how much importance these guys place on diversity and representation. Despite what some people might think, this really matters in games, and I hope people notice that here. Just take a look at the list of ballers on the Kickstarter page and tell me you’re not impressed. Plus, they haven’t gone the route of oversexualizing the female ballers and putting them in next-to-nothing outfits like so many other games do.

If you grew up playing NBA Jam like I did, this is the closest thing I’ve ever seen in a board game. Early reception has been extremely positive and I can’t wait to get my hands on this. Plus, if you missed out on Rap Godz previously, now’s your chance to grab it along with Hoop Godz. 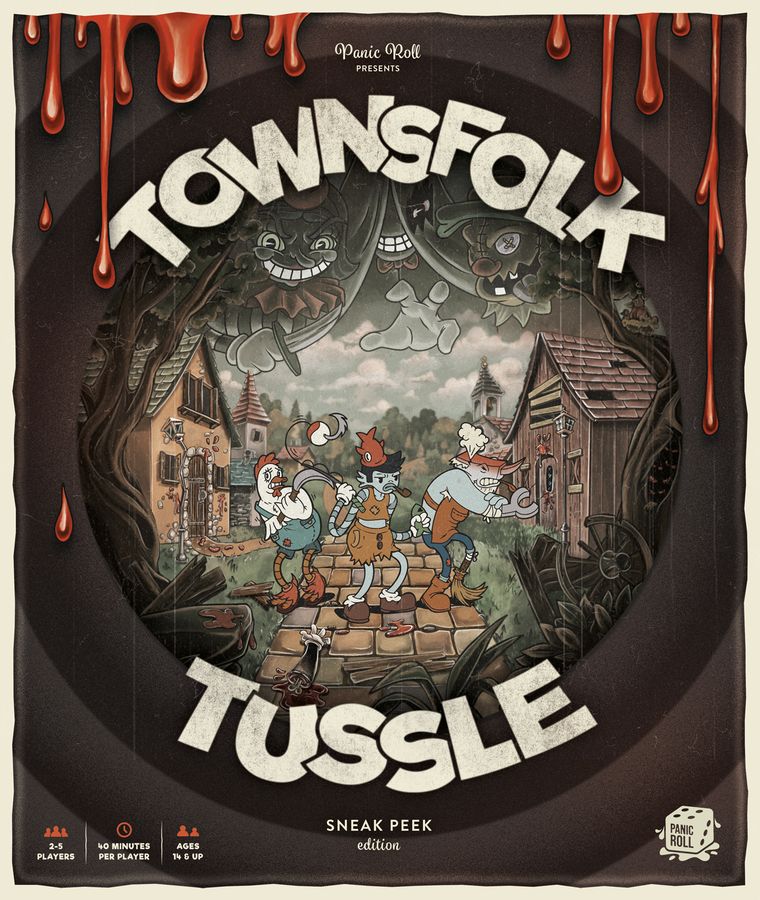 Are you tired of cooperative dungeon-crawlers that feel too much like other games? Are you tired of cooperative games with too much quarterbacking? Your answer doesn’t matter here, because either way, Townsfolk Tussle needs to be on your radar. This cooperative boss-battling game for 2-5 players takes some familiar concepts and implements them in a fresh way, combining that with a stunning cartoonish art style and a somewhat dark but interesting theme.

The Sheriff of Eureka Springs has been murdered, and it’s up to the Townsfolk to defend the town from the incoming Ruffians (bosses). Players must work together to win, but the game has some competitive elements sprinkled in to keep things interesting.

The game comes with 6 Townsfolk and 10 Ruffians. Each session plays in 4 rounds, split between a Town Phase and a Fight Phase. Players will spend the Town Phase acquiring new gear, revealing a Town Event, and essentially preparing for battle. The Fight Phase represents the boss battle itself, and each of these Ruffians promises to bring a completely different and thematic style to the battlefield. If you stand out more than your fellow Townsfolk, you might earn a special item, and going into the final battle, one player will be deemed the new Sheriff based on performances in the first three battles. In the final battle, if the Sheriff dies, the entire team loses!

Each time you play, you can choose different combinations of Townsfolk for your team, you’ll face off against different Ruffians in different orders, and you’ll see a ton of cards you haven’t seen before, or at least in new combinations. So even if you defeat all 4 Ruffians, you have plenty of reasons to return.

The tough part here is that it’s not a cheap game. Considering what comes in the box, the overall production quality, replay value, and everything else, the price absolutely seems reasonable, but not everyone will be able to justify spending this amount on one game. Everything else screams “BACK THIS NOW!” to me, but the cost is making me ponder this one a bit more first. 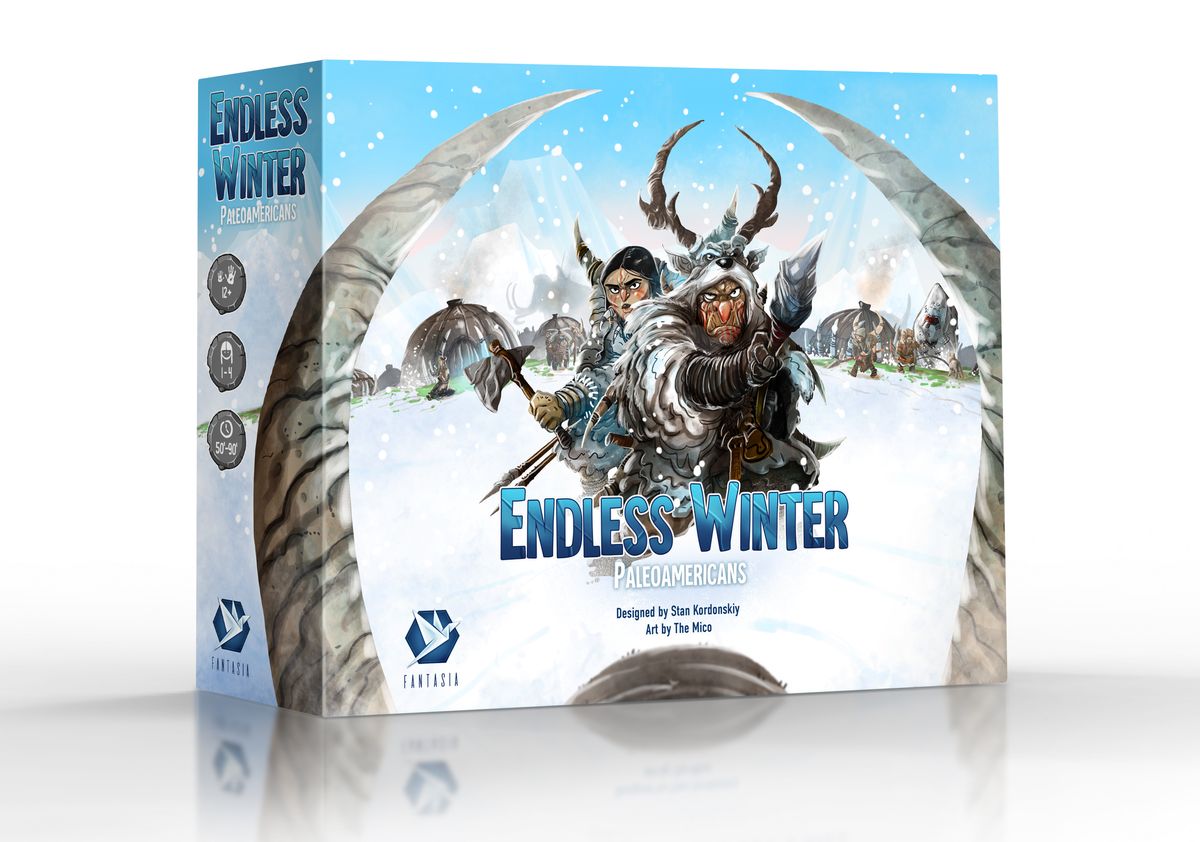 If you’re looking for a game that combines a lot of mechanics into one package with beautiful artwork and production quality, you need to take a look at Endless Winter: Paleoamericans. When I heard this game had elements of worker placement, deck-building, multi-use cards, hand management, area majority and more, I’ll admit I was skeptical. But after looking into the actual mechanics and how everything works, I’m much more convinced.

There’s too much here to explain how everything works, but the basic idea is that you represent a North American tribe in 10,000 BCE. Players develop their tribes across several generations, evolving from nomadic hunter-gatherers to prosperous tribal societies. Tribes will migrate, settle new lands, establish cultural traditions, hunt megafauna, and build megalithic structures. 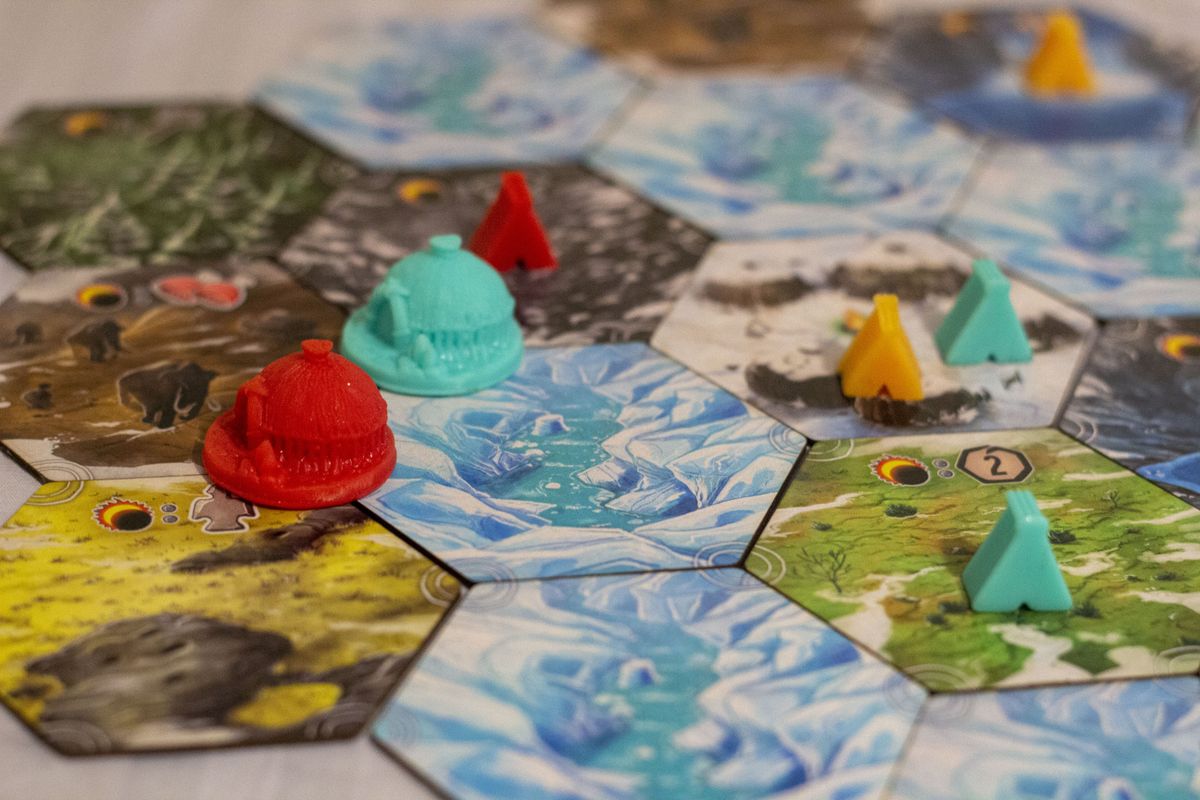 Something I’d like to highlight is the action columns. These work similar to action spaces in most worker placement games, but rather than a singular action, these column spaces allow players to take a sequence of multiple actions, as long as they can meet all the required costs. During the eclipse phase each round, players will earn bonuses and have the opportunity to secretly play cards which, when revealed, can change the turn order going forward.

By all accounts, the theme appears to be integrated extremely well with all of the different mechanics, and everything about this game looks absolutely gorgeous, from the high quality components to the beautiful illustrations on the cards. The base level pledge comes with a free expansion and module, and the campaign is already racking up some really nice stretch goals too.

This will be the first game published by Fantasia Games, but after this impressive campaign, I expect we’ll be seeing a lot more from them in the future.

Last but certainly not least is The Mariana Trench, brought to you by another new publisher, Bright Light Games.  You’re probably tired of me saying all of these games have amazing artwork by now, but I have to mention it again here because The Mariana Trench is no slouch in this department.

This is a light pocket adventure game for 1-2 players about deep-sea submarine exploring in the Mariana Trench, the deepest part of the ocean, situated near the Philippines. With a play time of 10-15 minutes, this will be easy to teach and play with almost anyone and in almost any setting. 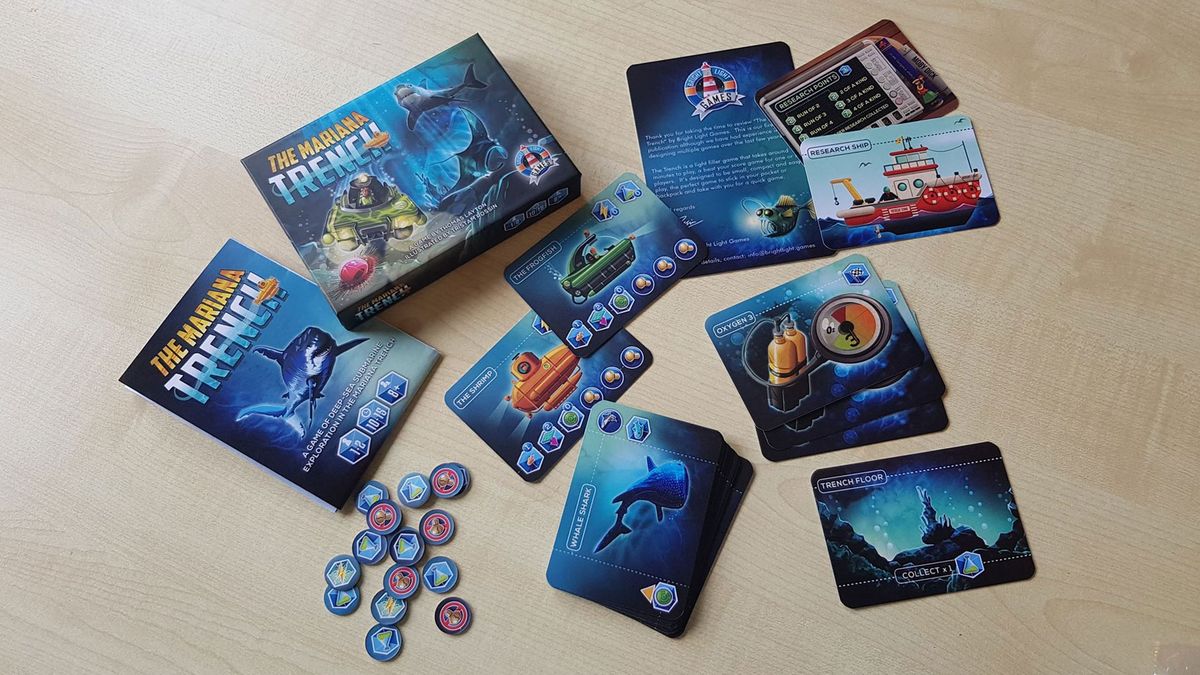 As a deep-sea researcher, your goal is to guide your submarine toward the Trench floor, finding mysterious creatures along the way. The deeper you go, the higher the risk, but also the greater the potential reward. The concept itself isn’t entirely new, but its execution is, especially in a game that you can play solo. The game plays in alternating turns until the submarines run out of oxygen.

With different submarines to choose from and a wide variety of sea creatures to encounter, the replay value here is surprisingly high for such a small, accessible game. I’m always intrigued by games that take a real-world setting and stick you right in there, and I look forward to playing this not only for the game itself, but also as an opportunity to learn more about something I know very little about. I’ll definitely be on the lookout for future projects from Bright Light Games.

All You Can Board@AllYouCanBoard·
4h