Our fifth overview is for the Geminate. 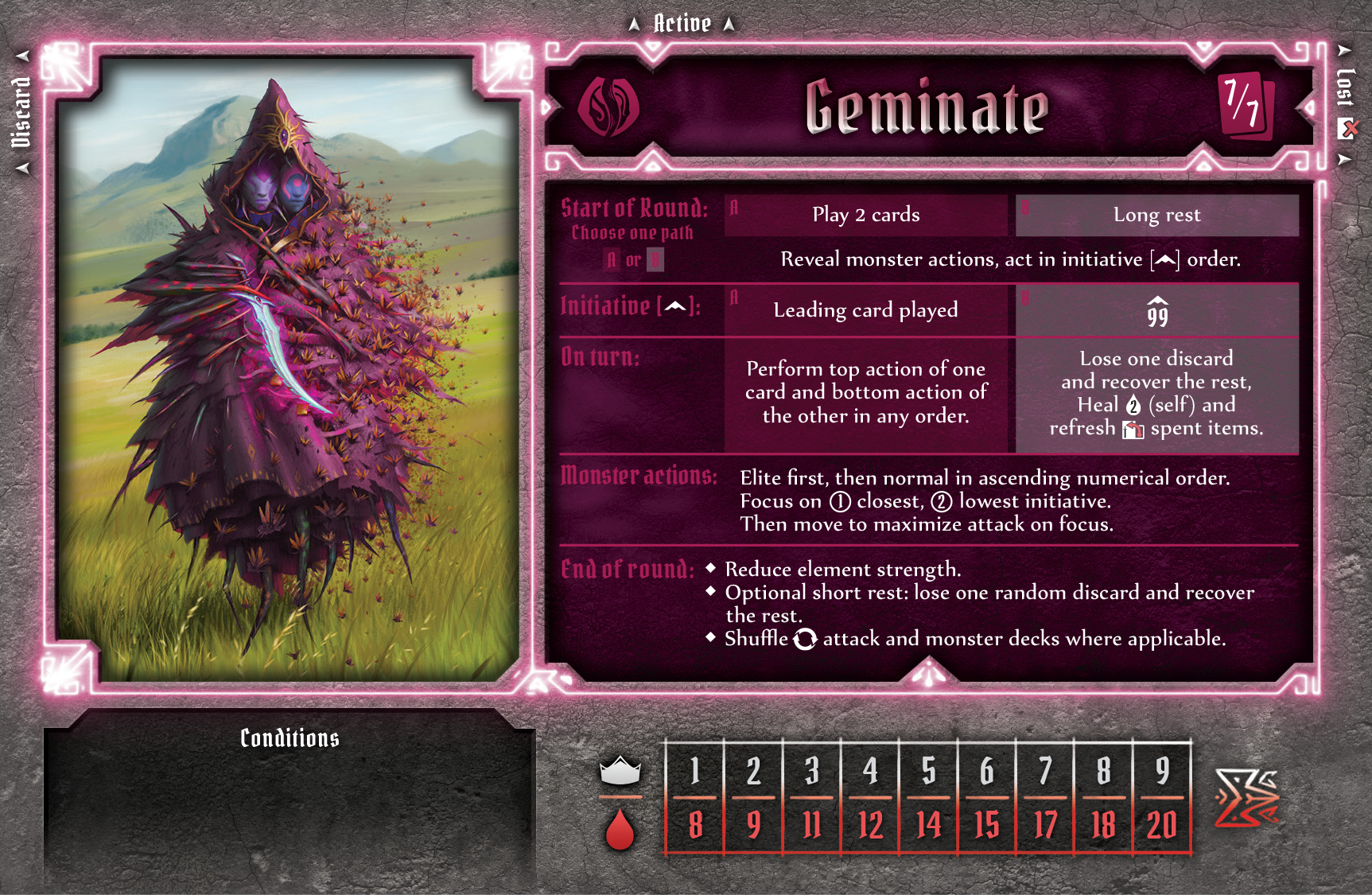 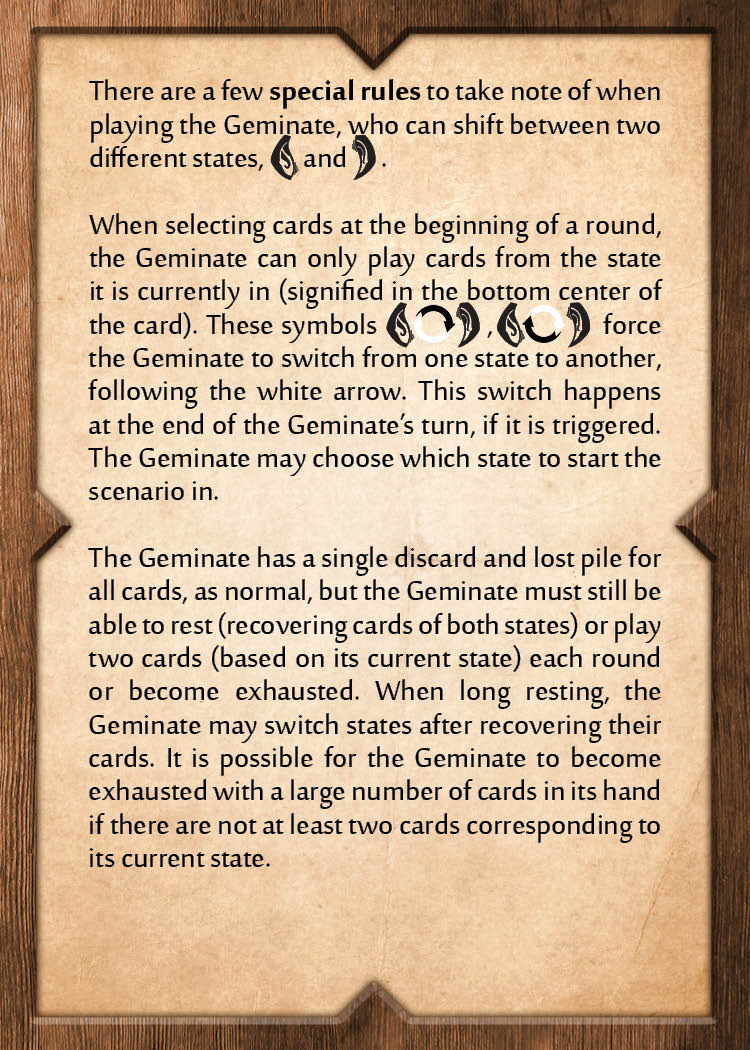 Many people have already touted the Geminate as the most complex Gloomhaven class to date, and can you blame them? This is sort of like two classes in one, with so much to keep track of and consider. The Geminate’s amazing damage capabilities at level 1 come with serious challenges that make you wonder how this made it as one of the six starting classes in Frosthaven.

From a thematic standpoint, I love this class. The hive mind of insects divided into two battling entities is represented well, as both stances feel vastly different. At level 1, there are 18 cards, 9 for each stance. See the special rules card for the Geminate, pictured on the right, for more on the stances.

Jumping back and forth between stances at the right times will be key, and as you’ll see from the cards below, the Geminate can do more than most classes in Gloomhaven in terms of variety. You can tank, deal massive amounts of damage, consume elements, move through enemies and terrain, and a lot more.

Each stance has four symbols indicating a switch in stance at the end of the turn. The left stance is melee and has minimal movement but big multi-target attacks. The right stance is ranged and has more movement but comes with drawbacks and restrictions to work around. We’ll look at three cards at a time for each stance, beginning with the left stance.

Here we see one of the Geminate’s many distinct characteristics, the odd hex patterns on multi-target attacks, each one accompanied by a different status effect. Notice that none of those attacks are loss abilities, so you’ll get a lot of use out of these, but be careful, as Hornet Stinger and Flailing Tendrils also damage allies. The Heal 2 of Hornet Stinger will see a lot of use, especially with a Move 2. All three of these cards also switch the Geminate’s stance.

Next, let’s look at another one of the Geminate’s traits, the ability to move through other figures and/or terrain.

Draining Pincers comes with another multi-target attack, although less odd than the three above. The other two cards here show a growing tendency for the Geminate’s abilities to hurt itself and its allies. Hirudotherapy is situational but can come in handy.

Let’s check out the three final left stance cards for level 1, which show us the Geminate’s ability to tank.

Frost Heave and Hornbeetle Carapace are both early initiative cards with a defensive Round Bonus and a loss attack. Notice the attack boost on Hornbeetle Carapace increases when in the other stance. We’ve also seen all kinds of elements on the cards so far, and with Changeling’s Boon, the Geminate can consume multiple elements to produce one element of its choice. Again, I love the thematic presence of this swarm just devouring everything in its path.

Here we get some more defensive options, and the bottom of Scarab Flight, like the top of Hornbeetle Carapace, encourages you to take advantage of this in the opposing stance. Into my Embrace is really interesting, as it pulls an enemy into melee range and switches your stance to melee, setting you up for a nice attack on your next turn.

Next, let’s look at some of the Geminate’s best movement cards.

Nothing we haven’t seen in Gloomhaven before, but compared to the left stance, this movement is fantastic, especially with being able to move through figures and terrain. Two of these also switch your stance, which allows you to move into position before going melee. The top of Selfless Offering is a nice reusable ranged ally heal that’ll see a lot of use. The top on Mind Spike and Firefly Swarm both hit hard even without the extra damage from the elements.

Flaring Hatred and Harvest the Essence show the Geminate’s restriction to having such long range, as these attacks would actually miss enemies closer than the range stated. Reshape the Guise, though situational, comes with a powerful loss ability allowing you to get back a lost card. 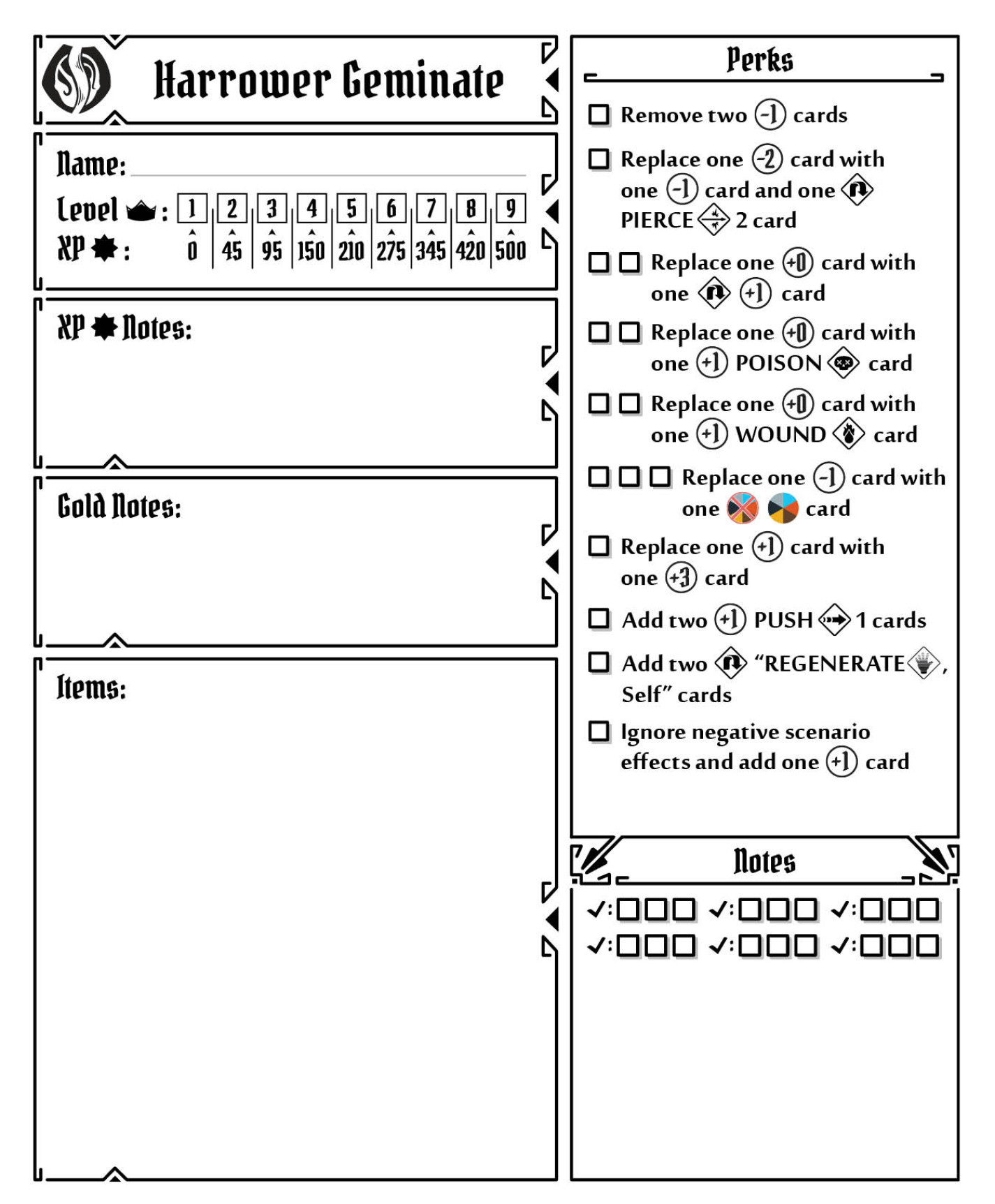 The one that jumps out immediately is removing a -1 to consume any element and generate any element. Considering how many elements the Geminate can make use of, I feel like these should be high priority perks. Plenty of cool stuff here with status effects, and the rolling Regenerates can’t hurt. 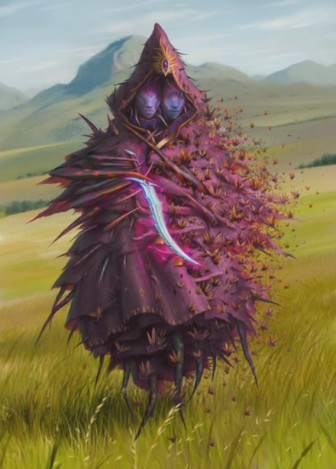 Some challenges I can’t predict at higher levels, but others are clear right from the start.

The first challenge will be deciding which cards to bring from each stance for each scenario. As you level up, you’ll have more cards and the choices will become more difficult. Do you keep taking cards from the same stance as you level up, prioritizing a stronger stance? Or try to take cards from both stances to remain more equal?

Many of the Geminate’s most powerful attacks or ways to spread status effects to enemies involve putting allies at risk depending on their position. You’ll have tough choices to make as you’ll sometimes have to injure your allies or yourself to maximize your chaos on the enemies.

How often do you switch stances? How often do you rest? Do you feel forced to long rest sometimes in order to have control over which card you lose? And be careful, because you can become exhausted if you get stuck in the wrong stance without enough cards, even if you have plenty for the other stance.

Whether you agree with this reckless swarm of bugs being a starting class or not, you can’t argue that this class isn’t interesting or unique. If you can manage the complexity and abundance of options, the Geminate could be one of the most rewarding, memorable classes yet.