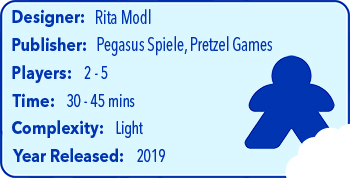 Dexterity games are often dismissed as being activities more than they are games, but Men at Work proves that notion doesn’t always apply.

It packs a surprising amount of game into a seemingly simple concept, complete with tough decisions, funny moments, and satisfying rewards for being bold. I had my doubts, but I knew enough about the theme and gameplay that I went in prepared to cause accidents and watch other people have to clean up my mess. What a fantastic concept.

That concept works so well, thanks in large part to the theme, highlighted by the game’s magnificent table presence. Even if dexterity games aren’t your jam, anyone who sees this being played would be tempted to stop and watch. It’s not just that it looks nice; the components are heavy, durable, and satisfying to maneuver. 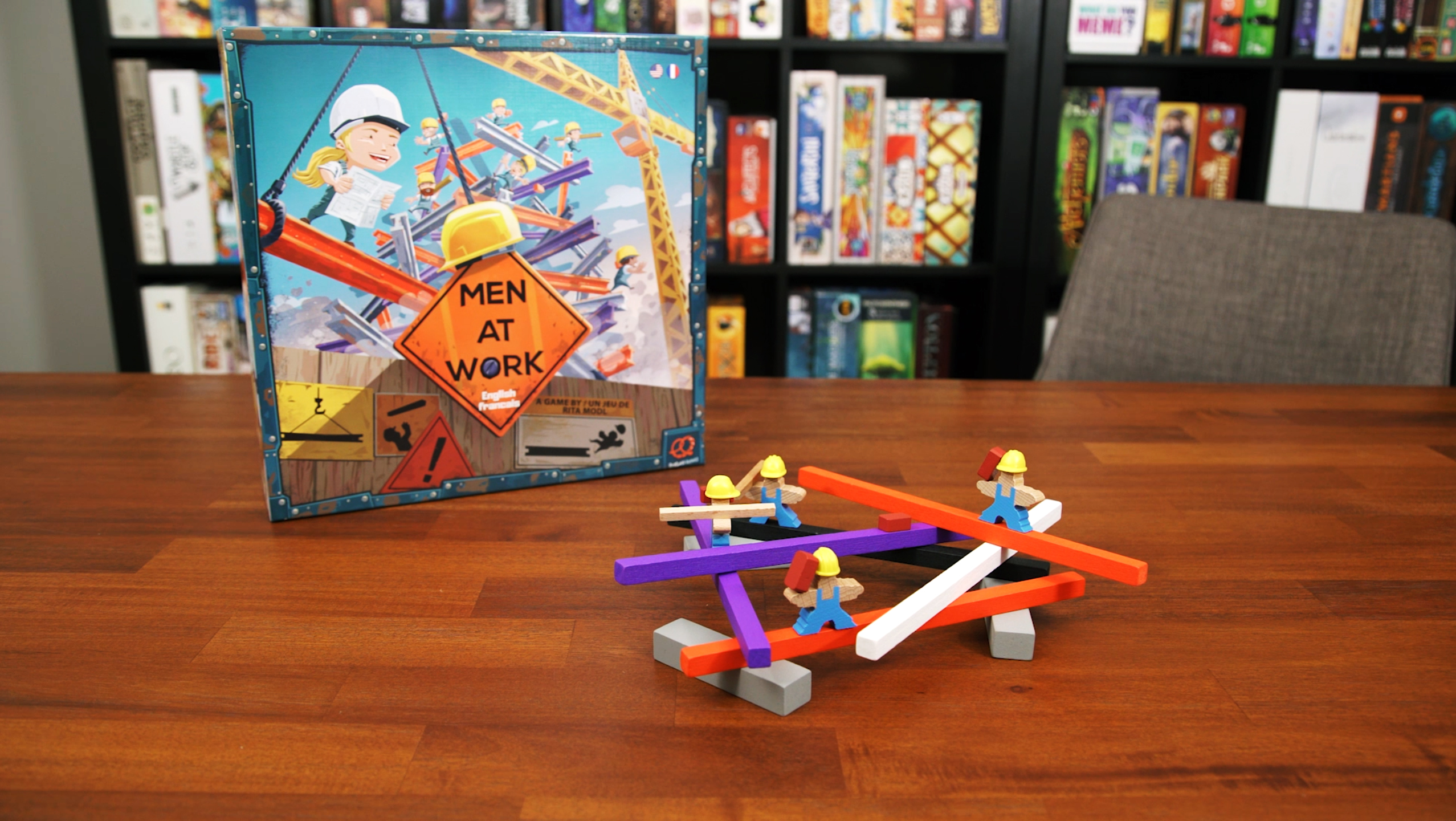 The entire presentation here is quite polished, from the cartoonish artwork to the sturdy and colourful materials, creating enough of an atmosphere to help you buy into the idea of building a construction site. It also has the right amount of charm to not make you feel too crushed when you ruin all the impressive work you and your opponents have built together. I expected to feel worse after watching a girder fall on a couple of injured employees, but there’s something disturbingly amusing about it too, knowing someone has to go in with the rescue hook and pry that corpse out from under the wreckage.

The idea of stacking objects while maintaining their structural integrity isn’t the reason I play board games, but any time I play a game where I have resources or tokens in my supply, I find myself stacking them anyway, so why not put that skill to the test in a way I can laugh at and be laughed at right back?

I’m telling you, the accidents are the best part of Men at Work, rivaled only by the moment leading up to an accident, where everyone around the table anticipates watching the active player fail miserably at their seemingly impossible task. 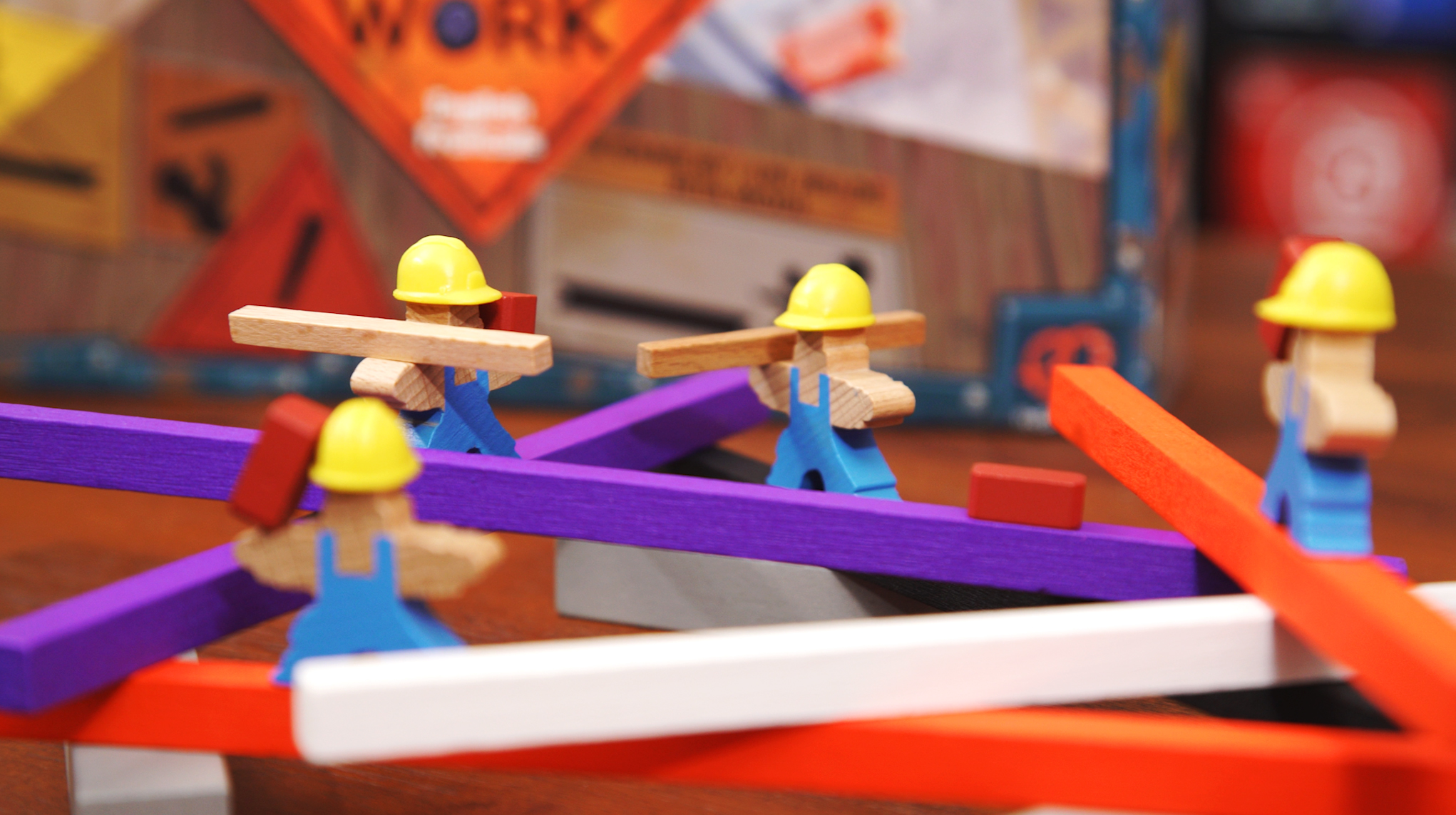 On the other hand, some of the most rewarding moments in Men at Work emerge from the creation of the construction site. This game not only allows you to be bold and creative, it actually encourages you to be. By striving to place the highest piece each turn, not only can you earn an Employee of the Month award from Boss Rita, but you also raise the bar for your opponents, making it more difficult for them to earn those same awards and keep up. The further you push that bar, the more pressure you place on others to try to build even higher. The level of tension and competition is therefore often dictated by the players, which works brilliantly. The pace can be set early in the game, and the stakes can be as high as they’ve ever felt within just a few minutes.

This game not only allows you to be bold and creative, it actually encourages you to be.

The precarious nature of the game is also one of its minor shortcomings, as the gentlest nudge of the table could send everything toppling. You need a flat, steady surface that can withstand a bit of bumping. I found the best way to play is around a coffee table. There’s a bit more of a performance element to being the only person to stand up and move around the table as you find the perfect place to slot in your piece, but it just amplifies the stakes and adds to the stability and integrity of the game.

No matter what’s happening in Men at Work, regardless of who’s winning or whose turn it is, everyone is always engaged and at least smiling, if not laughing. This is a 2019 release, but considering the year 2020 is shaping up to be, for me this came at a perfect time. Plus, since it’s so easy to pick up and play, and games tend to last no more than 20-30 minutes, you can teach Men at Work to anyone and even play it a few times once it’s on the table. It’s an excellent family game that most kids will love. 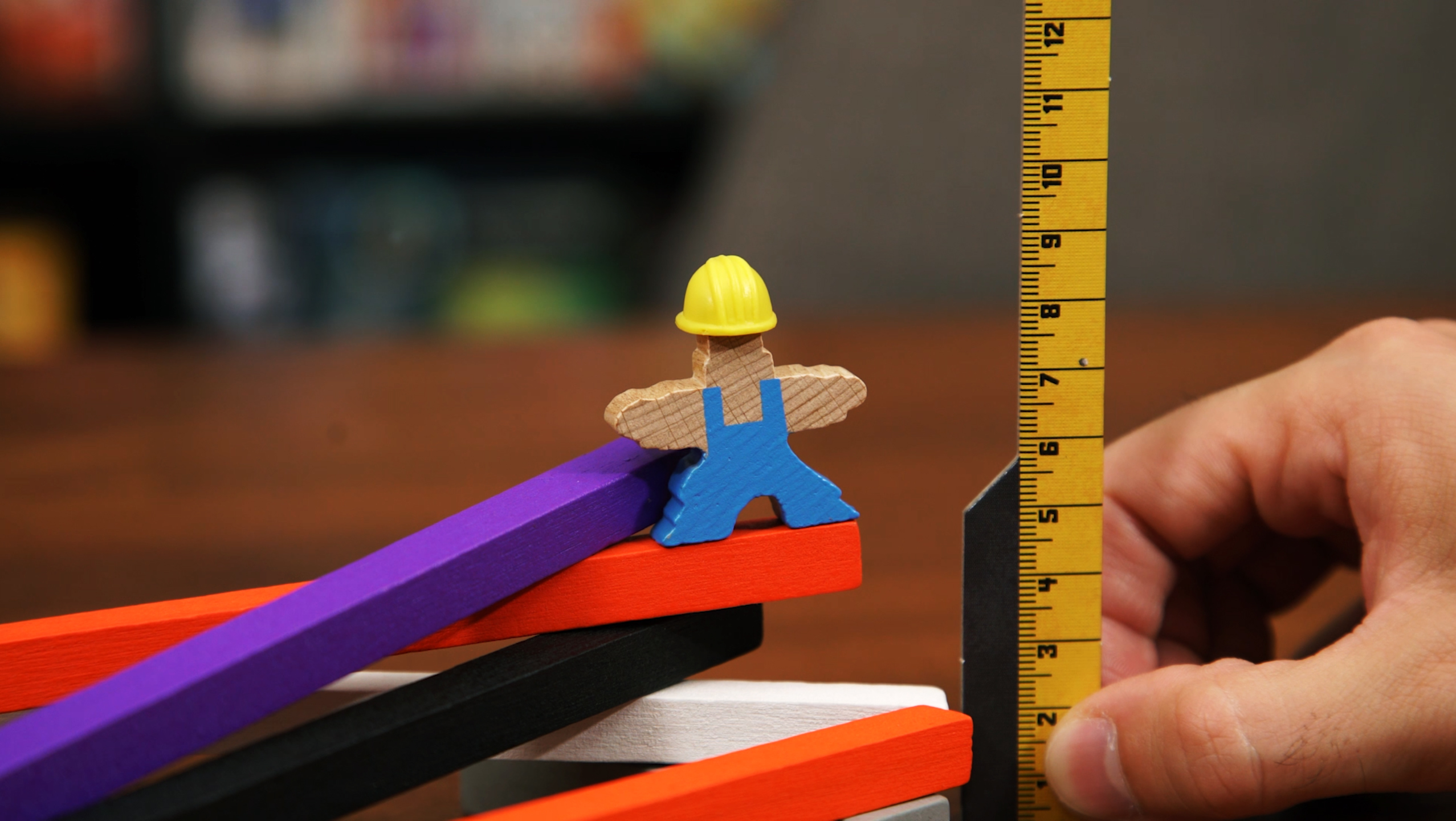 In most games, I’m not a fan of player elimination, as I often feel like there’s a better solution than having someone sit out and watch. Thankfully, it’s not really an issue in Men at Work, for two reasons. First off, since the game is just so entertaining to watch, even after being eliminated you can still get some enjoyment out of watching other players cause accidents or succeed in their ambitious plays. Secondly, and most importantly, the game is so short that even when someone gets eliminated relatively early, they only tend to have to watch for 5-10 minutes before the game ends. 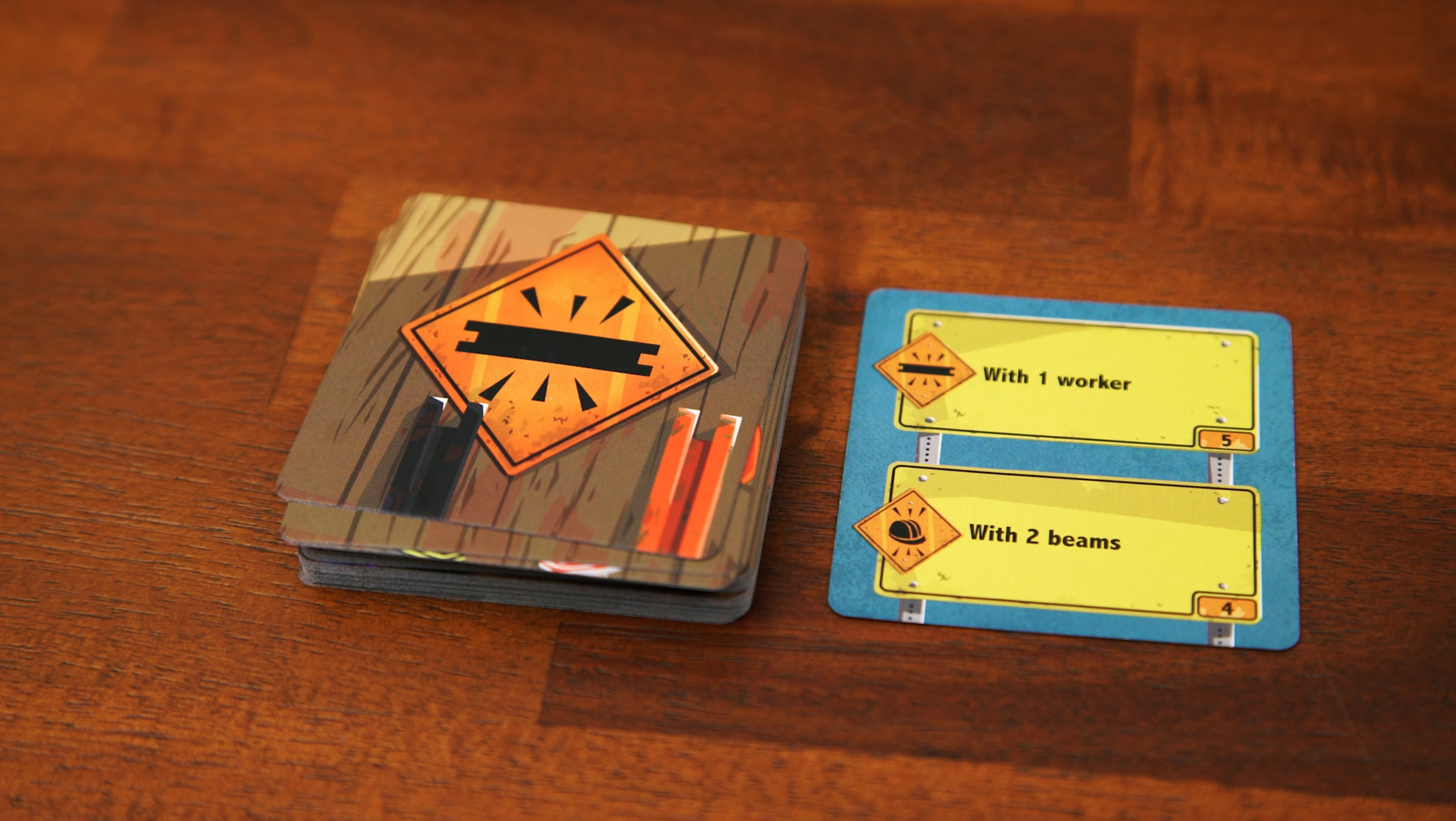 If you hate the feeling of lack of control in board games, Men at Work might not be for you. You have to build off of what other people have built, and you’re often stuck with a task you don’t even want to do. The Foreman variant addresses this by having each player start with two random task cards from the deck, and twice throughout the game you can forego the required task and instead play one of your cards from your hand to complete that task instead. This adds a bit of a long-term strategic element to the game, and helps you mitigate a bit of that bad luck. I love the aspect of the unknown in Men at Work, and even as someone who normally likes to have more control in games and doesn’t enjoy high amounts of luck in games, it totally works here for me.

If you hate the feeling of lack of control in board games, Men at Work might not be for you.

If you like to keep a small, finely curated collection of games, then Men at Work might fit that perfect niche of a dexterity game like it did for me. If you already have a dexterity game you really like and you don’t play it that often, Men at Work might not have enough there to completely change your stance on the genre. If you can get a group of 3-5 players together regularly enough, it’s probably worth it. If you do most of your gaming with 2 players, there might not be enough here for you. Personally, I just have too many other 2-player games I’d recommend before Men at Work.

Based on the quality of components, variability of setup, and turn-by-turn development of the game state, if you like Men at Work and have the 3-5 players for the optimal experience, you’ll never complain about replay value or deterring components. This makes a great gateway game, an icebreaker game, or something light to start or end a game night. 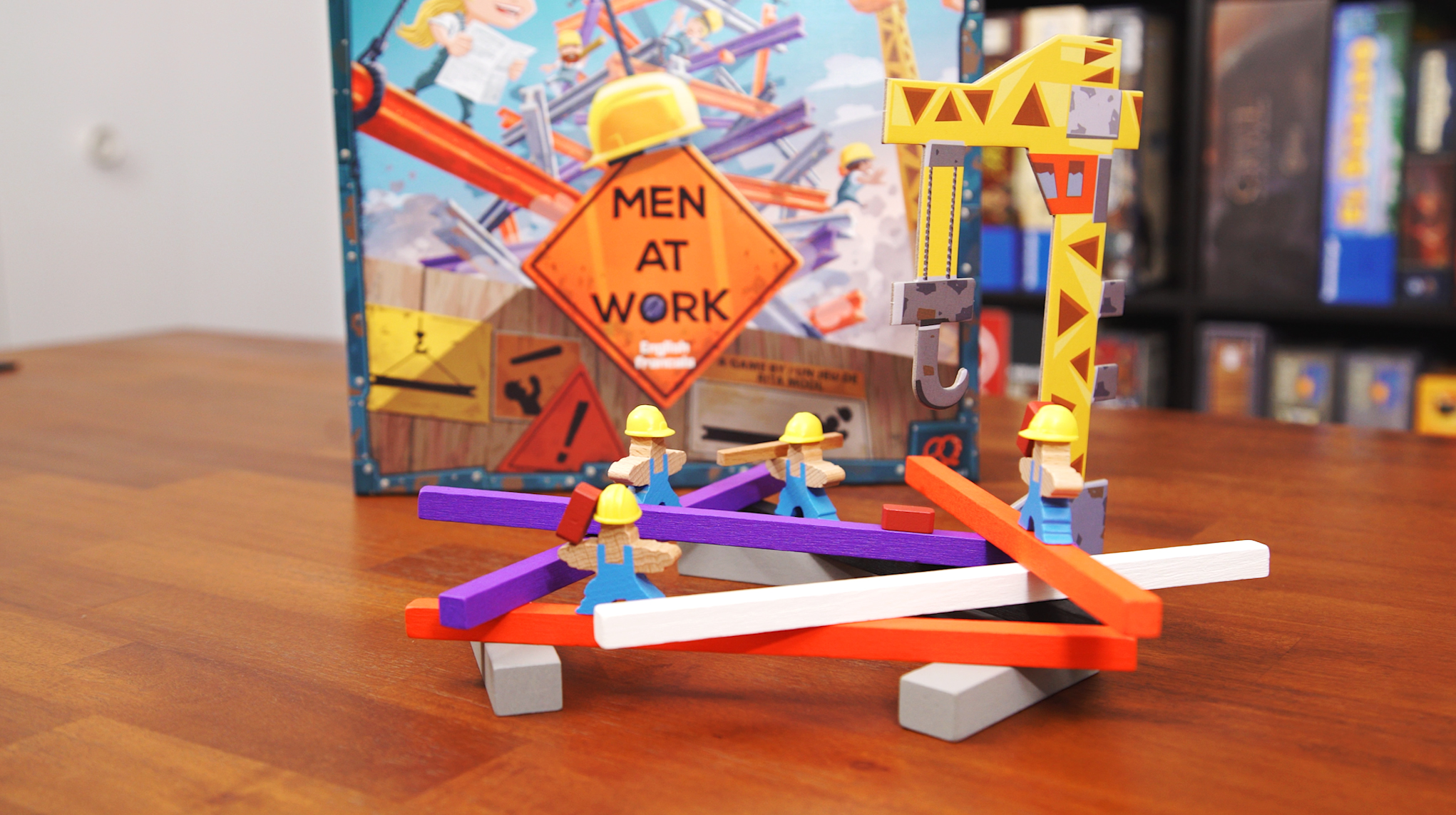 Men at Work combines stacking with a fun theme to create an experience unlike anything else in my collection. Never before has it been so easy to revel in the failure of my opponents or shrug off my own. Passing the buck for clean-up duty feels like the perfect way to get over causing an accident in public.

Since it’s more rules-heavy than you might expect for a stacking game, you’ll probably find yourself checking the rulebook quite often for minor clarifications. The game state is also prone to being ruined easier than most other games, as a bump of the table can be enough to send everyone’s work tumbling down. If you can get past those minor shortcomings, Men at Work has a lot to offer for anyone looking for a game that’ll have everyone around the table laughing and having a good time, regardless of who wins or loses.

Artwork and Components
8.5
Design
7.5
Fun Factor
8.5
Value
7.5
7.8
Men at Work does nearly everything you could ask of a gateway-level dexterity game. With high quality components and an engaging theme, it’s easy to get carried away just watching others play. When it’s your turn, you feel the tension and pressure of trying to complete this potentially unforgiving task, but when it’s someone else’s turn, you don’t feel bad for them for one second, as you sit back hoping for them to fail. Just remember, you might be the one who has to clean up their mess!
Reader Rating: (0 Rates)
0