Josh Wood’s debut game is a clever 2-4 player game that blends familiar mechanics like card drafting and set collection in a refreshing way. It’s easy to learn and the average game takes only 15-20 minutes, making it a great choice for almost any game night.

Rarely do game designers create their own artwork, so Josh Wood deserves a lot of credit for bringing such a fun, whimsical look to Cat Lady. It might not be for everyone, but I think the cartoonish style works wonders for a light game like this. Sure, the cat drawings could use some variety (all cats have the same basic outline with only colour variations, meaning most cats look the same), and the box art might not stand out on the shelf to some people, but ultimately, the artwork fits well and suits the game. 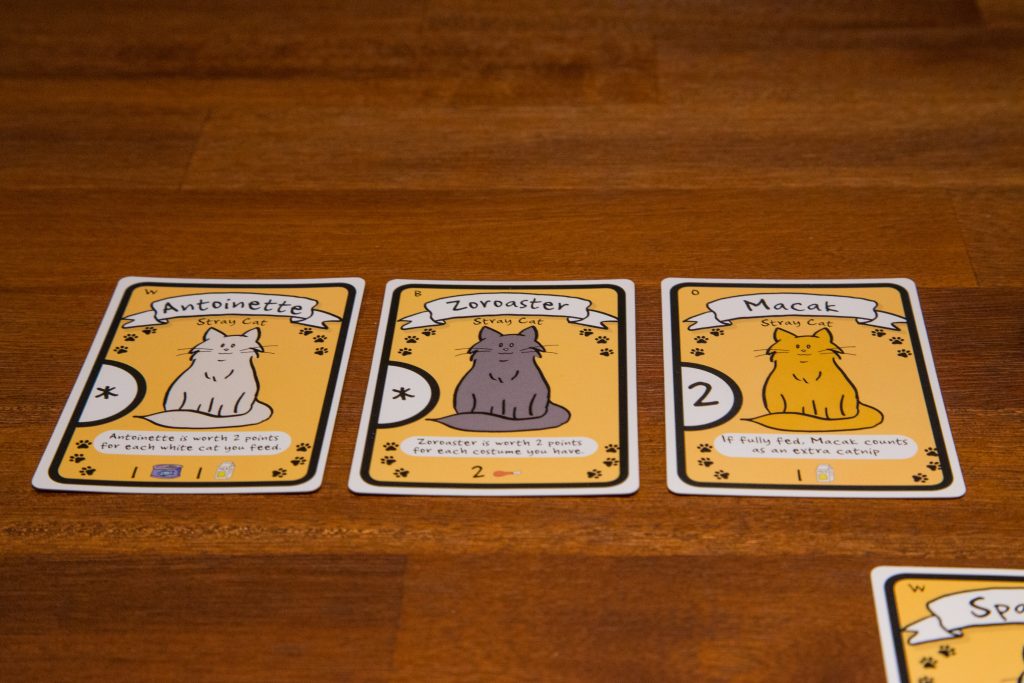 These could all be the same cat covered in different dyes.

The food cubes are simple but fine, the cards are good quality, and the game comes with a nice cat token.  The game packs into a fairly small box. Overall, these are all sensible choices to help keep the cost of the game down.

Cat Lady often draws comparisons to Sushi Go!, and the comparison makes sense. Both games involve card drafting and set collection and play in a similar amount of time, but the 3×3 nine-card grid really sets Cat Lady apart, leading to some agonizing decisions. Do you take a card you don’t want in order to get two that you do? At times, the grid will have nothing you want and your decision will hinge on taking what hurts you the least.

The clever cat token serves as a tool to limit players from grabbing a game-swinging new set of three cards, unless they have one of the few Spray Bottle cards. The higher the player count, the more the grid changes between each of your turns as more cards are being taken. 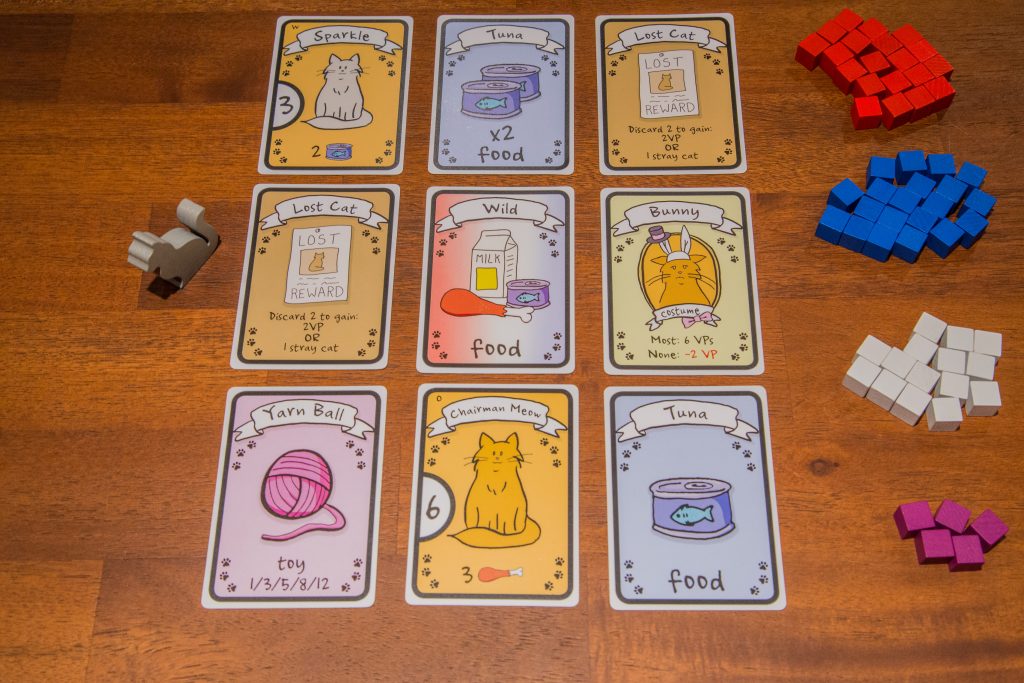 The meat and bones of Cat Lady: the grid. The middle row is currently blocked by the cat token.

Resource management never feels overwhelming, as you just need to have enough food for your cats by the end of the game. It’s quite easy to manage, even for newer players.

As with most card games, luck certainly plays a part here, as you can never really count on getting specific cards. Adapting is essential to succeed, and if you don’t account for the luck factor, you have nobody to blame but yourself. If you grab a bunch cats in your first few turns thinking you have plenty of time to collect food, other players might then place higher priority on grabbing more food, forcing you to let cats starve. Then is it really bad luck just because the odds were in your favour? Better planning would negate this situation. So, while there is an element of luck, strategy undoubtedly takes precedence.

Cat Lady can be taught in just a few minutes, and I have yet to find anyone who doesn’t enjoy this game. I bought it for my wife last year, and we’ve probably played it at least 25 or 30 times. It has quickly become one of our go-to games to start or end a game night, and is perfect for just about any crowd, whether they like cats or not.

Even with four players, there is very little downtime between turns, and plenty of player interaction. When it’s not your turn, you should still keep track of what your opponents do so you can better weigh your options on your turn. For example, if you’re not aware of roughly how many Costumes or Cat Nip cards have been taken, it could be the difference between winning and losing when you make your choice. There is no optimal, guaranteed strategy to win, so you must always act based on the current state of the game.

The cat names, theme and artwork all come together so well and are sure to generate some laughs, especially for cat lovers. From start to finish, the game is fun, and since it plays so quickly, players should rarely feel like they’ve lost until the final points are counted.

There is no optimal, guaranteed strategy to win, so you must always act based on the current state of the game.

This is an excellent travel game, as it doesn’t require a lot of table space and the components can be packed into an even smaller box. It scales well at all player counts, although it’s arguably most fun with three or four players.

The ever-changing grid and different stray cats available each game help keep things fresh. If you overplay this, you could get tired of it, but that can be said of most games.

For what it strives to be, Cat Lady is one of the best light, quick games available that still packs a decent amount of strategy and variability across plays. The price point is absolutely reasonable for how many plays you will likely get out of this. 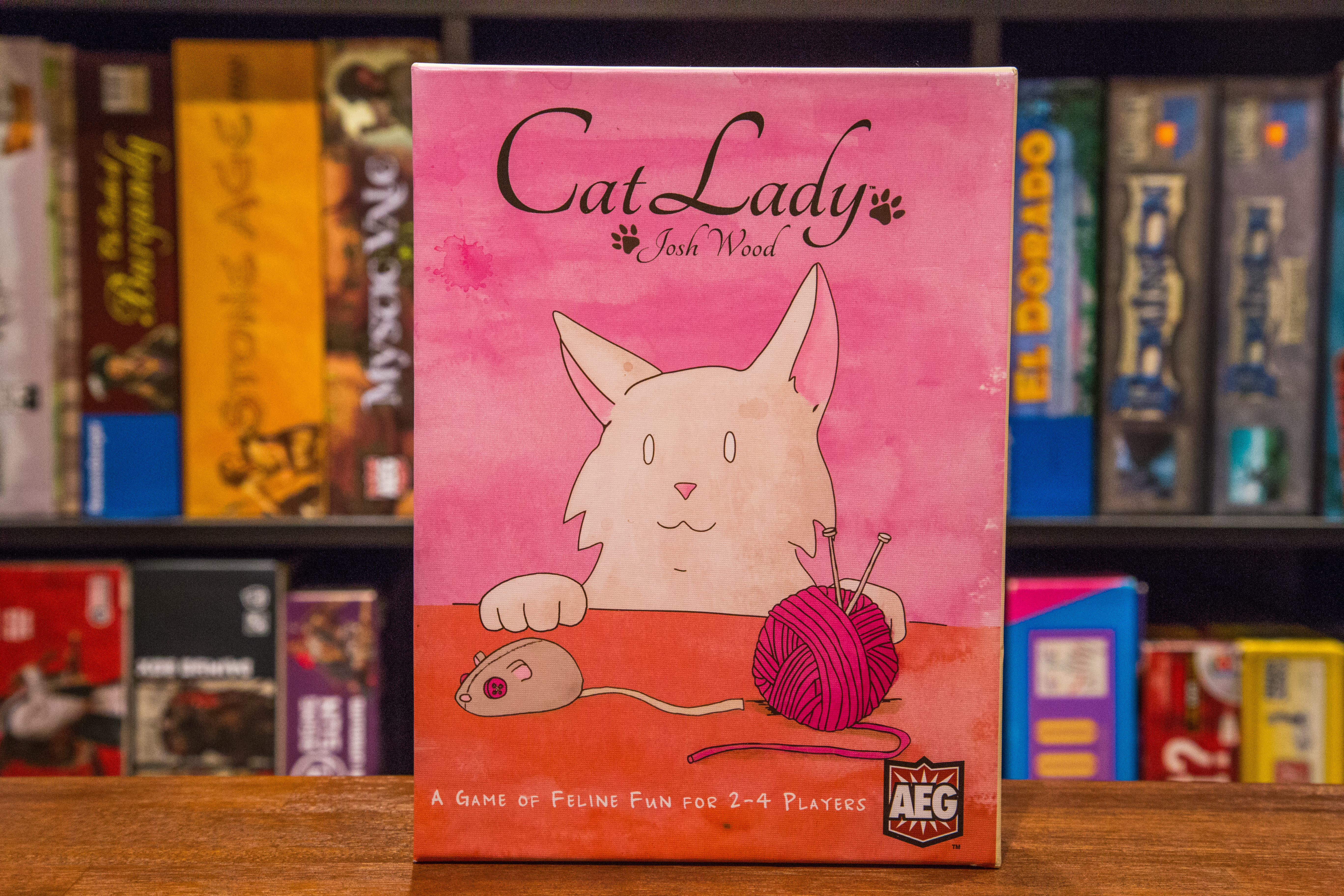 If you’re looking for a quick game you can teach almost anyone to play and get a ton of replay value from at various player counts, you won’t find many choices better than Cat Lady. Josh Wood has created a clever, fun card game that does almost everything right. It would be a real shame if you missed out on this one.

Artwork and Components
7
Design
8
Fun Factor
8
Value
8.5
7.9
Cat Lady's brilliant 3x3 nine-card grid sets it apart from other card drafting games, forcing players each turn to take a row or column of three cards. These decisions are surprisingly tough, and it's usually not long before a new player realizes Cat Lady has much more room for strategy than they initially thought.
Reader Rating: (0 Rates)
0