Our sixth and final overview is for the Blink Blade. 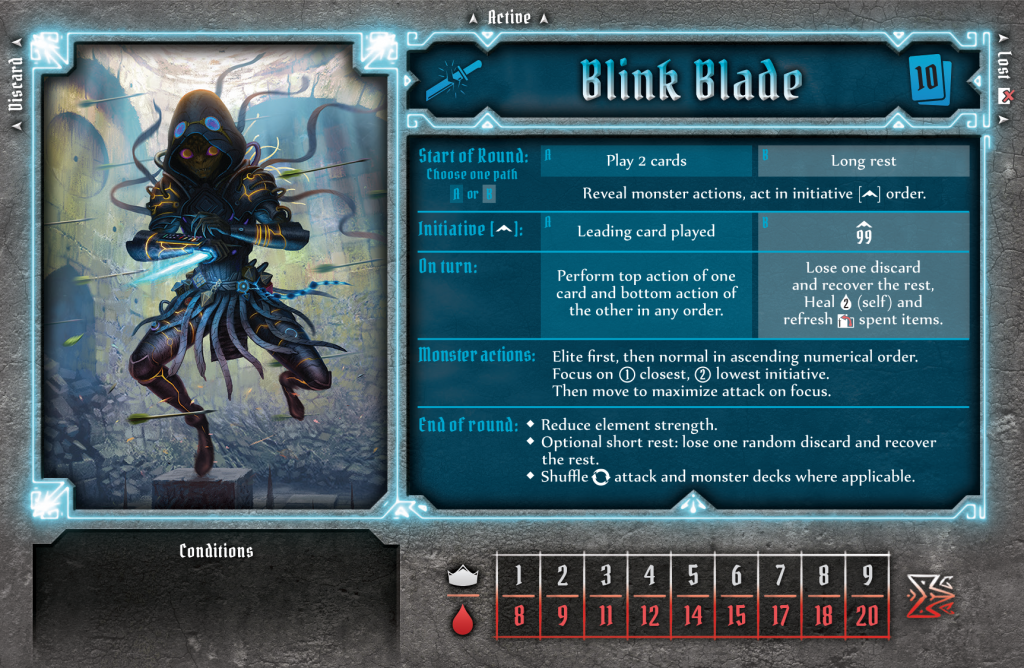 The Blink Blade is a very unique class in Frosthaven and comes with its own set of special rules and a completely new, previously unseen mechanic. Unlike all other classes in Gloomhaven and Frosthaven, when starting a round as the Blink Blade, before selecting your cards, you must declare if you’ll be acting fast or slow. If you decide to act fast, you must remove a counter from your rules card. If there are no counters on it, you cannot move fast. If you move slow, you’ll add a counter to your rules card, up to a maximum of two that can be added this way. Other sources that add counters can extend this maximum to five. 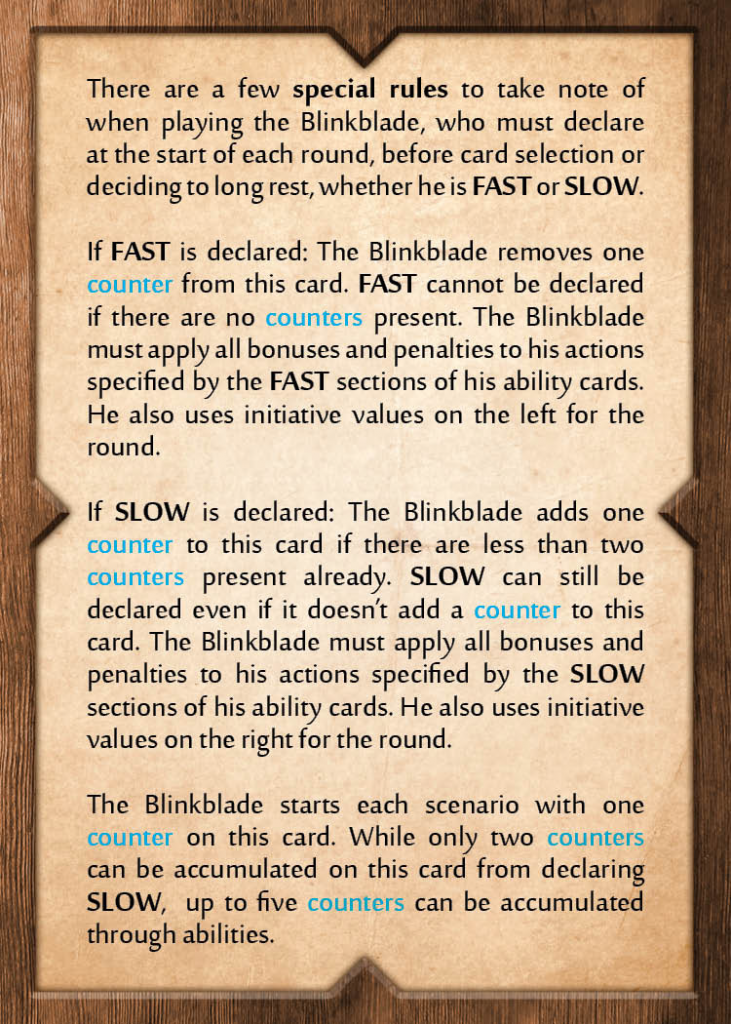 Beyond this new step, all of the Blink Blade cards feature two initiatives: one fast and one slow. All ability cards also have areas that only trigger depending on if you’re acting fast or slow. This means not only are you considering which ability cards to play each round, you’re also deciding how to utilize them and take advantage of them based on the speed at which you’re acting.

All of this may seem complex at first, but in my playtest, the Blink Blade quickly emerged as one of my favourites of the new starting classes, if not my overall favourite. There are always so many things to consider, so many options to ponder and ultimately, the results of playing this class efficiently are very powerful and satisfying.

The Blink Blade also relies on the Wound status effect, with multiple ways to inflict it on enemies and another ability card that specifically targets all wounded enemies.

All things considered, the power potential of this class makes it very attractive, especially for those looking for a challenge with high swings in either direction. 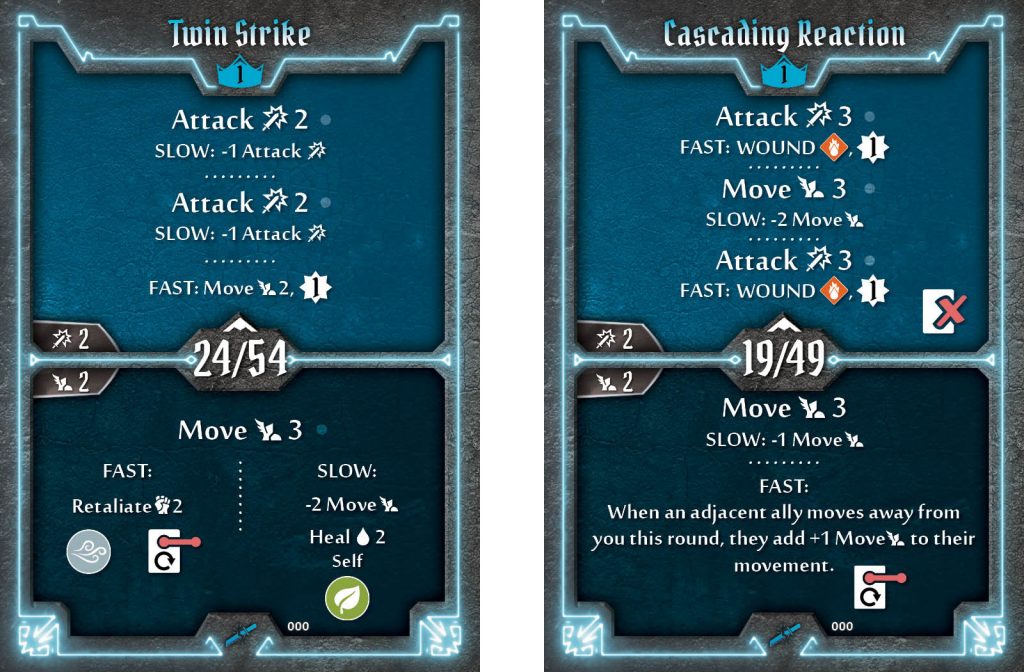 The Blink Blade’s plethora of solid attack cards fluctuate in strength depending on your speed. Twin Strike and Cascading Reaction both offer dual attack actions on the top with the former not being a loss card either. 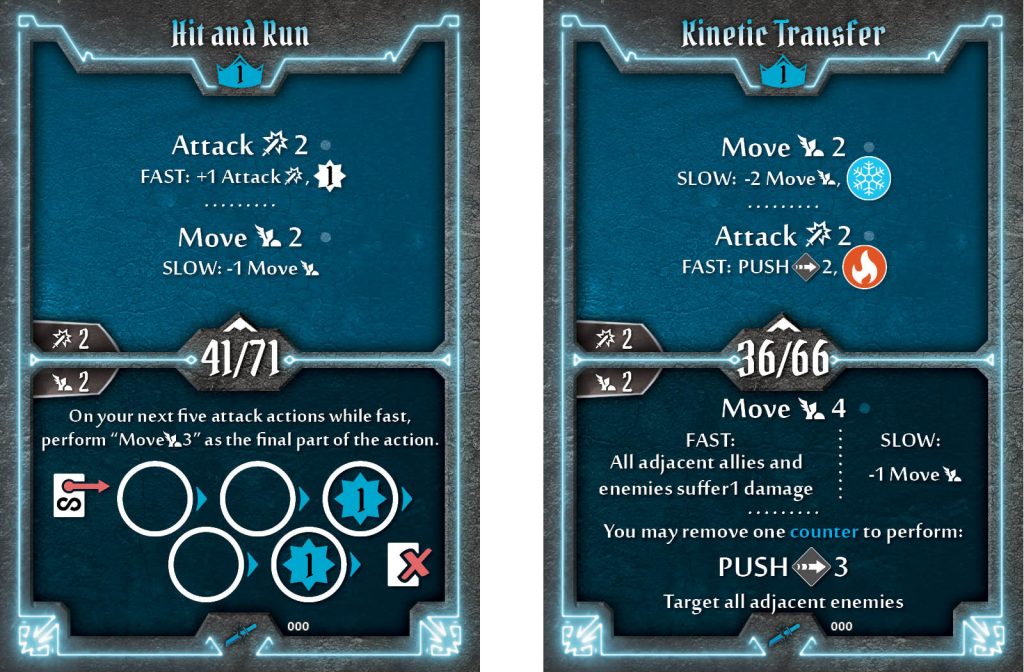 Likewise, Hit and Run and Kinetic Transfer are both notable for offering the opportunity to Move and Attack on the top action alone. Movement as a top action can be extremely powerful and advantageous.

Blurry Jab, Sap Speed and Power Leak are straight attack cards that fluctuate in effectiveness depending on if you’re declaring fast or slow. Whereas Blurry Jab loses power if used while slow, the other two cards are situational and can be used in both cases, depending on what you’re looking to accomplish in a given turn. 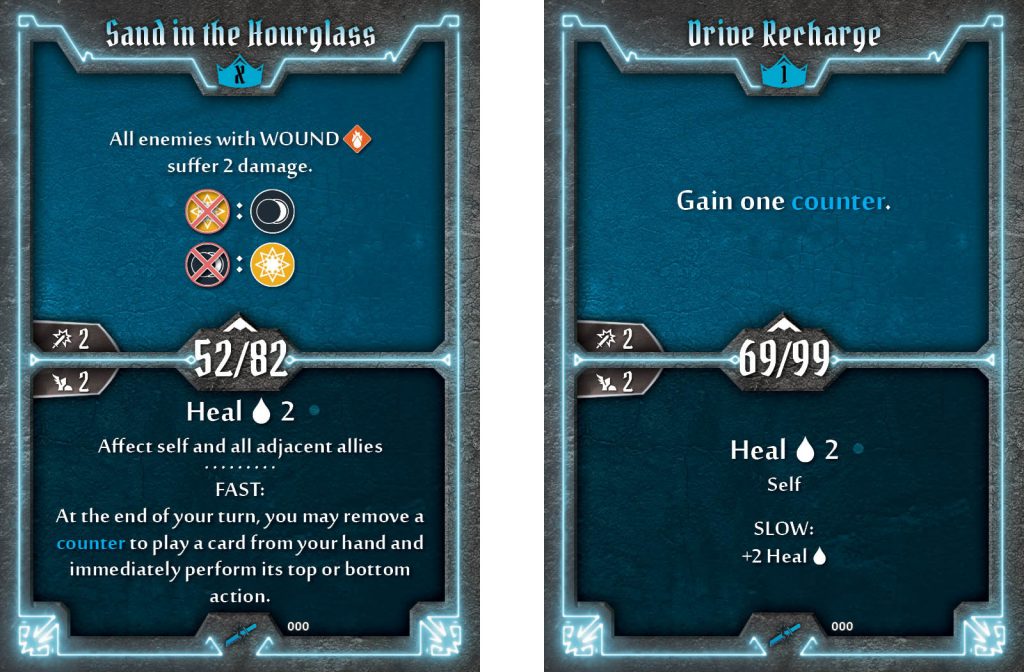 The Blink Blade also features cards that either add counters to the rules card or use up counters for powerful effects, such as Sand in the Hourglass or Drive Recharge. Sand in the Hourglass is an especially interesting and powerful card that gives you the option of spending a counter to immediately play a third card this turn for either its top or bottom ability. And this isn’t a loss!

The remaining cards are slightly more situational, but quite interesting, rounding out this class and giving it plenty of potential to be a strong choice for your first Frosthaven campaign. 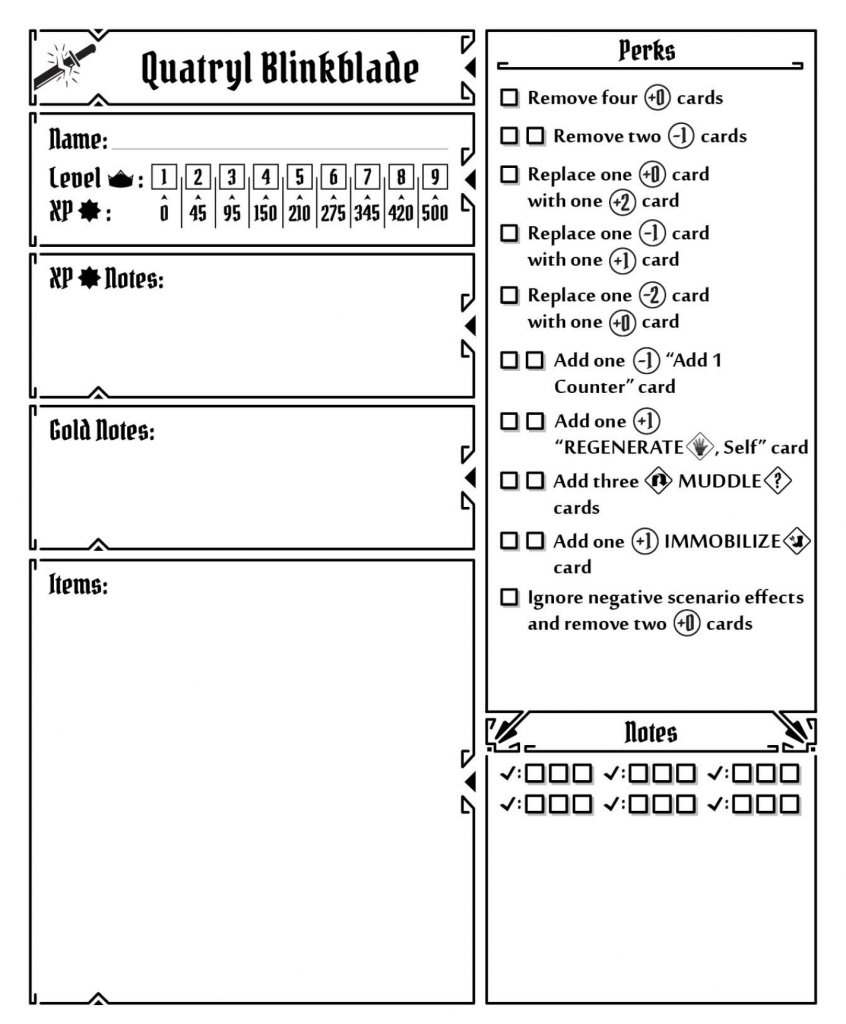 While mostly familiar, the Blink Blade perk options skew heavily into ways to remove all the +0 cards from your modifier deck. A single checkbox will get rid of four of them, another checkbox will remove an additional two and there’s yet another option to replace one with a +2. Add on ways to remove the negative cards in your deck and once you’ve unlocked a bunch of these perks, the Blink Blade will likely rank up there with the best classes in terms of its modifier deck. 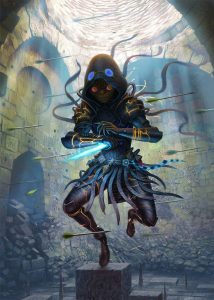 The biggest challenge with the Blink Blade will be managing its unique resources: counters. As you can only act fast by spending a counter, your success will rely heavily on your ability to make sure you have counters ready when you need to act fast. But with ability cards that also use counters for strong payoffs, you’ll likely always be running low and needing to prioritize when it’s safe to act slower. And remember, this comes with a higher initiative number too.

I see this as being similar to the choice of short resting or long resting. We’d all like to be able to long rest all the time, but it often just isn’t feasible with how the scenario’s going. Likewise, you’ll probably wish you could act fast much of the time, but your strength and mileage with the Blink Blade will be a direct result of your ability to pick and choose when it’s best to act slow and store counters for later.

For me, this was an exceptionally fun challenge. I welcome complex classes and new challenges when the payoff feels like it’s deserving of the extra effort. With the Blink Blade, it was almost always worth it and it gave me so much satisfaction when I planned properly.

The Blink Blade is definitely at the top of my list to try from the get-go when Frosthaven arrives next year and I can’t wait to explore its level 2 to 9 cards and see what lies ahead for this exciting new class.