This copy of Queenz was provided by Rio Grande for review purposes and we want to thank them for passing it along.

One of the biggest requirements for a good game is for the level of strategic depth and fulfillment to match the complexity of the rules. Queenz: To bee or not to bee, by Bruno Cathala (Kingdomino) and debut designer Johannes Goupy, pushes that ratio more than I expected. The rules are so simple but this could be enjoyed by anyone from family members and inexperienced gamers to your most competitive gaming groups.

Queenz doesn’t do a whole lot new, but it takes other familiar mechanics and blends them together in a satisfying, puzzly way that challenges your spatial awareness and pattern-building skills.

With artwork from the legendary Vincent Dutrait, beekeeping has never seemed so appealing before. Even the inside lid of the box is given a level of attention not seen in most board game boxes. That being said, like most abstract puzzle games, the theme mostly exists in the background as a reason for players to be doing what they do in Queenz.

Beyond that, the overall quality here is fairly high. The different coloured honey pots are nice, as are the Diversified Production tokens, Gardener token and orchid tokens. I appreciate that the hives aren’t just generic wooden cubes. The spaces on the scoreboard seem a little small for the player score tokens, but it works fine.

My biggest complaint is that the polyomino fields, which are one of the main features of the game, are so flimsy and thin compared to everything else. They’re not particularly easy to shuffle, they don’t always sit flat as they tend to curve, and they just feel understated compared to the orchid tokens and hives being placed on them. It doesn’t ruin the experience but I do wish they had chosen a higher quality option for the fields.

It’s hard not to immediately note the design similarities to other games, particularly Azul and Spring Meadow, two other games I really like. Here, you have the abstract set collection of Azul along with the polyomino tiles and central shared grid of Spring Meadow. There are some twists that set Queenz apart even without any vastly innovative mechanics.

First off, it’s an excellent design choice to boil each turn down to two simple initial choices: take orchid tokens OR fill a field. You often can’t fill a field, so sometimes that first decision is already made for you. An even better mark of excellent design is that even when your only choice is to take orchid tokens, the decision becomes quite challenging if you consider not only your next scoring opportunity but your long-term scoring as well. 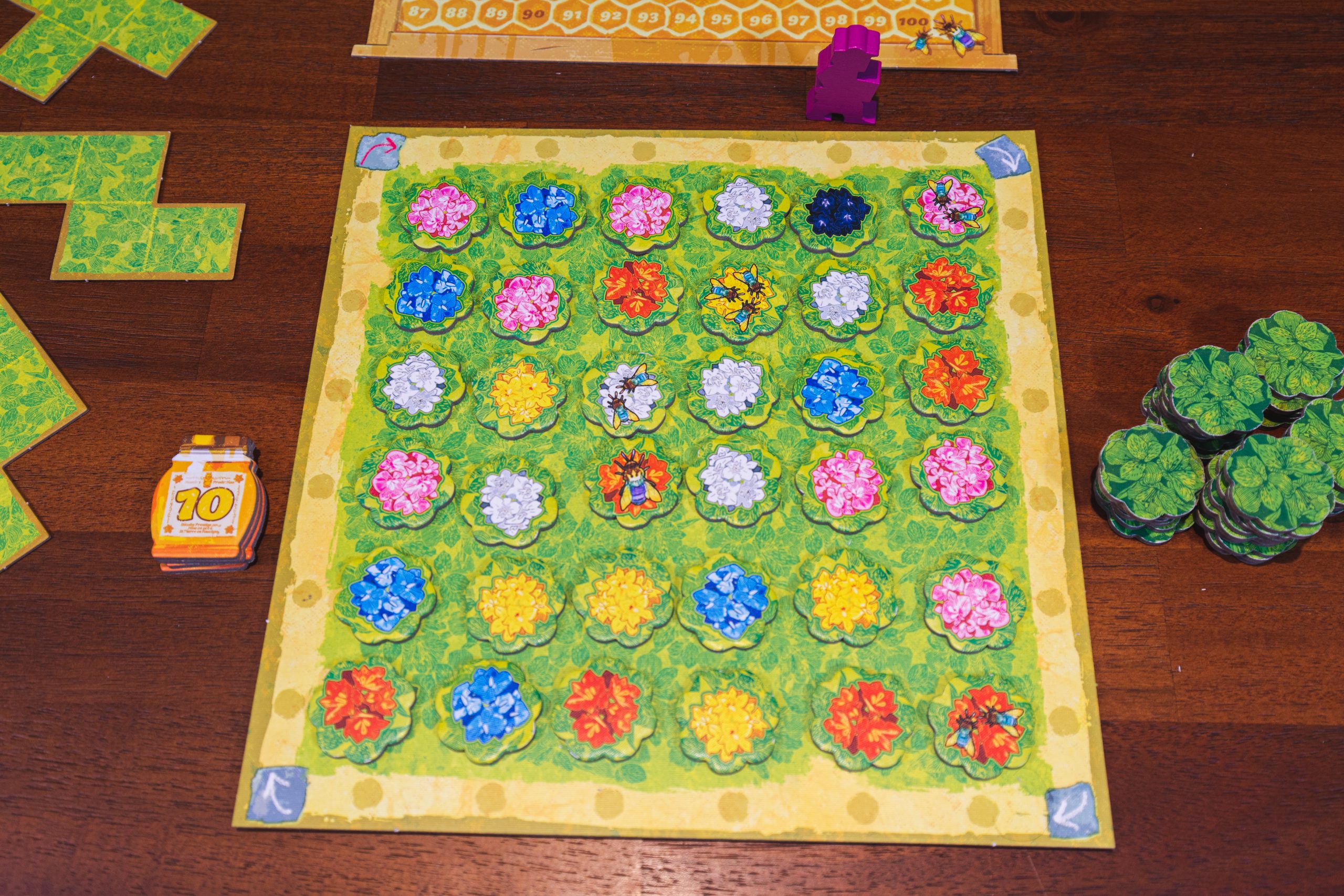 Being able to take one, two or three orchid tokens from the Garden board can already be a difficult enough decision, but when it comes time to fill a field, that’s where your decision-making is really put to the test. Hives are powerful point getters and the Diversified Production tokens can help decide close games, but the bulk of your points will come from your scoring when placing fields. The acquisition of the tokens is less important overall than the placement and order, especially as you consider placement of hives and queen bee tokens.

The changing state of the board helps make Queenz feel like you have a different decision to make each turn. The Gardener token moving as many spaces as the number of tokens that player takes is another clever decision that gives players a bit more to consider and an extra reminder to be aware of what their opponents are doing.

The changing state of the board helps make Queenz feel like you have a different decision to make each turn.

These altered takes on familiar game mechanics work so well together and combine to create a tight, interesting puzzle that never quite feels optimally solved. Every time I play this I’m surprised by how difficult it is to accomplish what I had in mind from the start. You won’t simply have this one figured out after a couple plays.

Since Queenz can be taught in just a few minutes, and has relatively simple rules, it can be played with almost anyone at any game night. Turns move quickly and once the fields start getting filled the action never feels like it slows down until the end-game is triggered by any player completing their fifth bloomed field. The game hits that sweet spot of ending just before you want it to end, as you’ll always have some unfinished project or scoring opportunity.

The game hits that sweet spot of ending just before you want it to end, as you’ll always have some unfinished project or scoring opportunity. 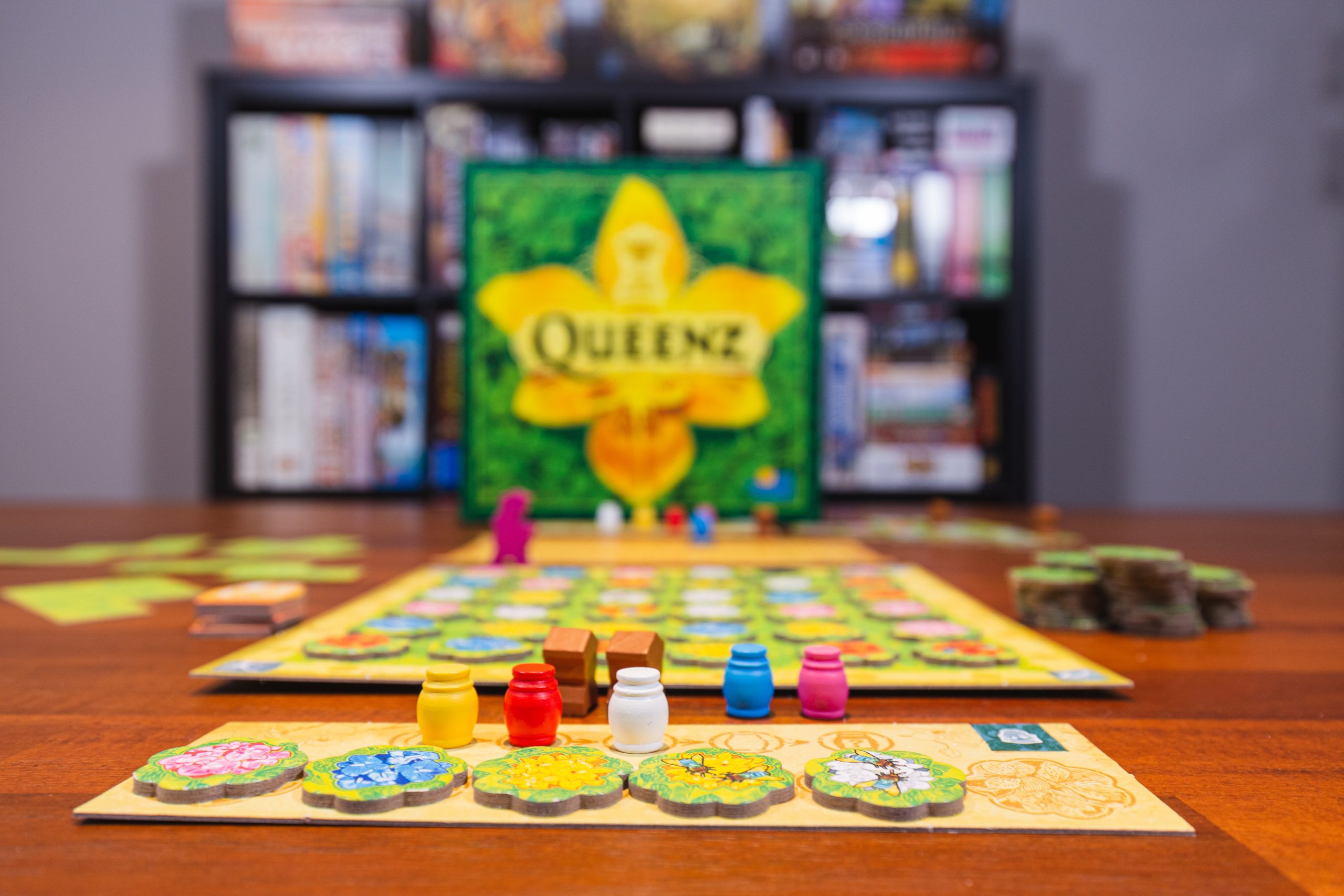 Queenz is not mean, but everyone is certainly looking out for themselves here. It pays to keep an eye on what your opponents want and where the Gardener will land depending how many tokens you take on your turn. You also need to pay attention and race for the Diversified Production tokens, as well as available fields. Considering the theme and depth of Queenz, the level of player interaction feels perfect to me, especially with games lasting 30-40 minutes. 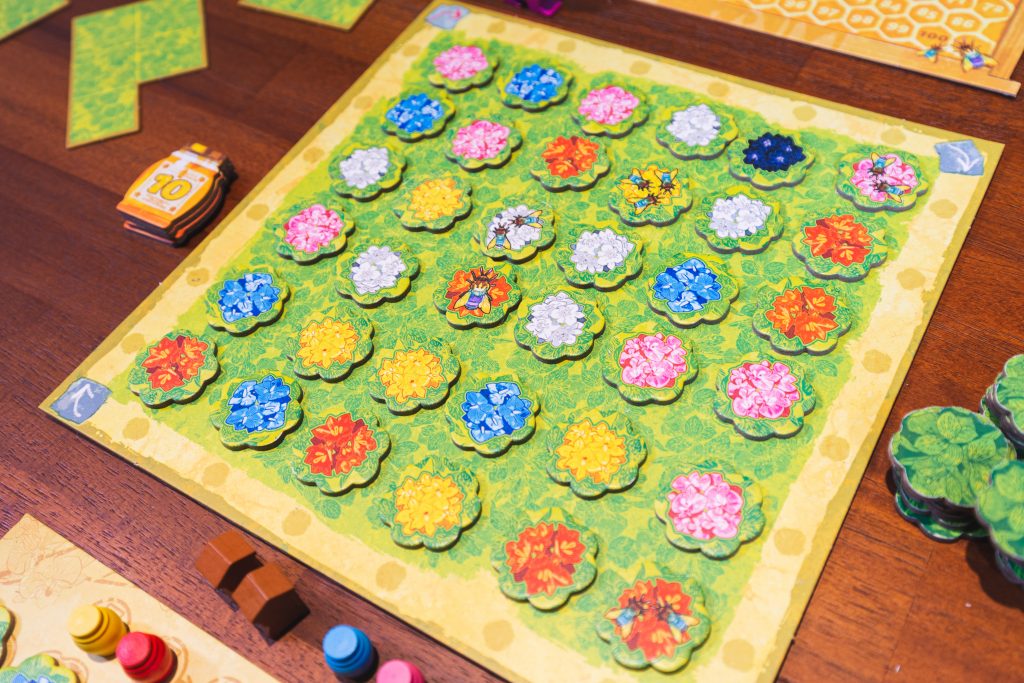 This plays really well at all player counts. As with most games like this, it’s more direct and confrontational with only two players, as every decision you make only affects one specific opponent and you can somewhat control which orchid tokens are available to them. With more players, the race to the Diversified Production tokens feels more urgent, and you never know what will be available on the board from turn to turn as you watch more players go before you get to make a decision again.

The only aspect of the setup that changes from game to game is the randomization of the starting orchid tokens on the Garden board. There are no private or common objectives or any form of asymmetry, so you have a good idea what you’re getting into when you start a game of Queenz. This is a big part of its appeal, as it works so well as both a family game and a competitive game, but ultimately, this might hurt its replay value slightly.

This can be used as a gateway game to introduce new players to the hobby but it can also work as a household staple if you’re looking for a puzzly abstract game with a pleasant theme that works well at all player counts. You probably won’t plan a game night around this but it’s a short, satisfying option to have on hand for any occasion.

Queenz doesn’t necessarily bring anything entirely new to the table, but it succeeds in being a widely accessible abstract game that works well at all player counts (2-4) and will be enjoyed by a variety of ages. Bruno Cathala and Johannes Goupy have squeezed a whole lot of gameplay and interesting decisions out of a relatively simple rule set. You get so much out of a short, easy game and that’s probably the main reason I’ll keep coming back to Queenz for another round.

Artwork and Components
7.5
Design
8.5
Fun Factor
7.5
Value
8
8.1
What Queenz lacks in innovation it makes up for with a refreshing blend of familiar mechanics, creating a charming abstract puzzle game to play with your family and friends. The average turn is simple and quick but still provides meaningful decisions that can have long-term impacts throughout the game. On the exterior, this looks like a simple game about beekeeping, but within this simple rule set there are a plethora of options and spatial configurations to consider.
Reader Rating: (0 Rates)
0