Two-player games are always in high demand and that landscape is already crowded with some of the best board games out there, such as 7 Wonders Duel, Patchwork and Jaipur. So it isn’t easy for a new one to come along, catch my attention and make a claim for table space over the other great choices. Stellar, however, has done just that. While it initially flew under my radar, this eye-catching and strategic game is now one of the first games I think of when looking for a two-player experience that’s slightly more complex and offers more tactical decision–making.

Stellar isn’t just one of the prettiest two-player games I own, it’s one of the prettiest games I own, period. The space theme already presents a lot of opportunities for cosmic beauty and Stellar capitalizes on this in spades. The telescope cards are a beautiful canvas with which to add your planets, satellites and several other objects, and it’s a shame that you cover them all up so quickly, because the art really is wonderful. Fortunately, the cards you cover them with are equally well-illustrated, if a little bit repetitive after a while. Taking a step back to look at your completed telescope area once all the celestial objects are placed is always a visual treat. 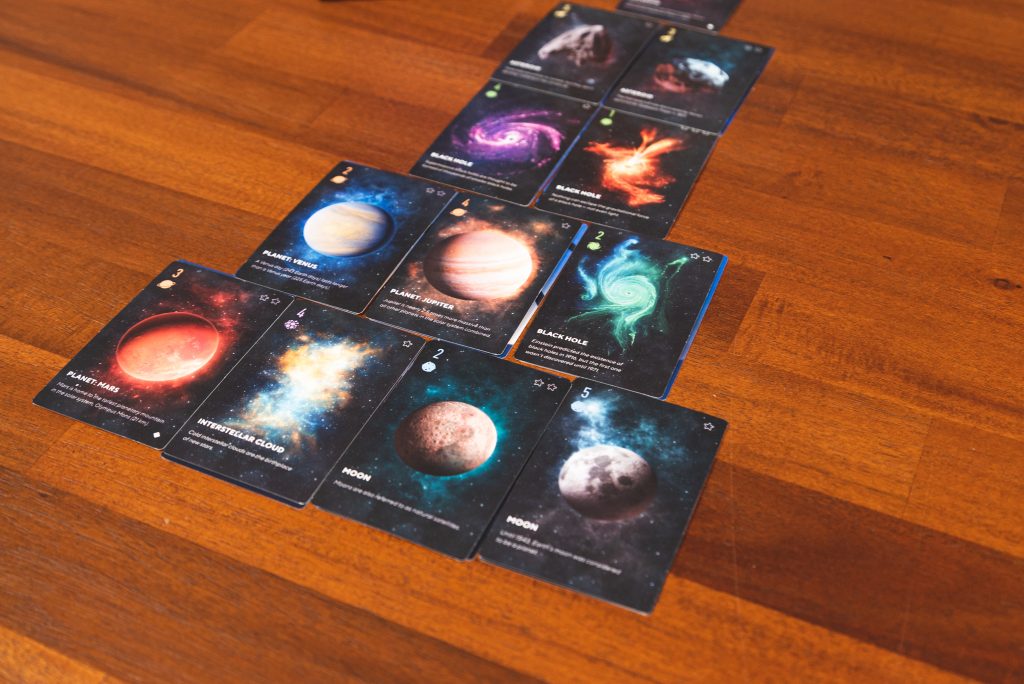 There isn’t much in the way of components, as this is strictly a card game and that’s all you’ll find in the box, besides the scoring sheets. The quality is great and extra care has been put into the design of each different type of card. There really isn’t much bad I can say about Stellar when it comes to this area. If I’m being picky and thinking wishfully, it would’ve been great to have a playmat of some kind or some way to stop the telescope cards from sliding around as you place cards on them, but for a small box game it wasn’t to be expected.

Stellar is very unassuming as a small box, two-player experience and you wouldn’t be faulted for expecting a more relaxed, simple game from it. Really, Stellar is a surprisingly complex game and usually takes a full game to really wrap your head around the mechanics and scoring. If you’re sitting down to play Stellar for the first time, my advice would be to plan for two games: one to really learn all the mechanics and the strategy and the second to actually play a more competitive game. 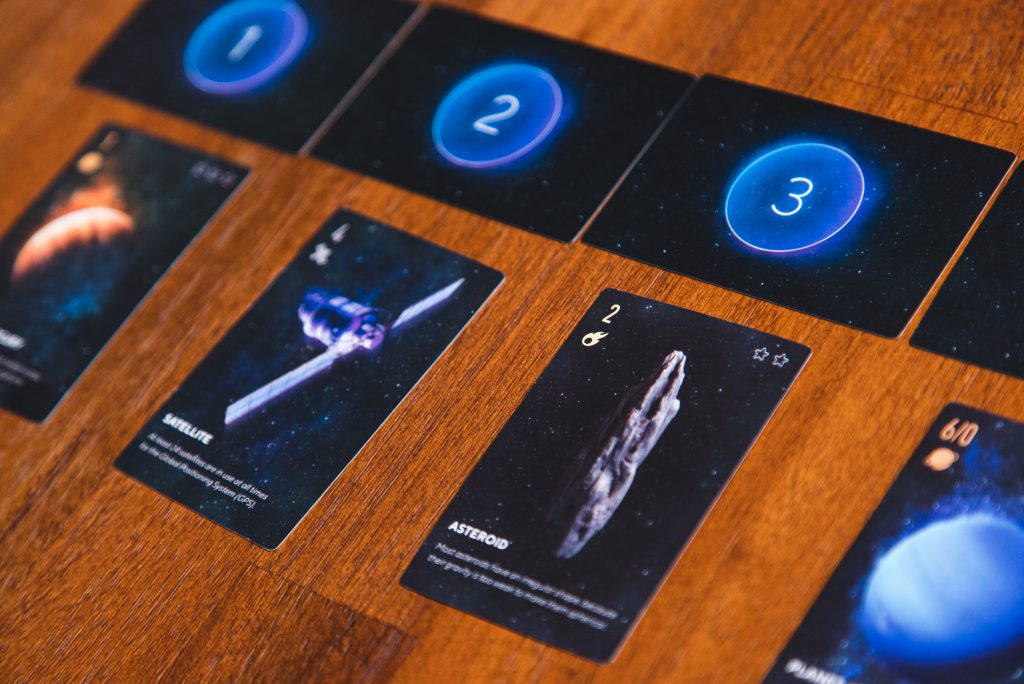 There’s just a ton to think about in Stellar. Every move you make influences a future move or one of three different scoring categories. Playing a card from your hand dictates the next card played, and where you play that card also influences the area in which the next card is placed. Playing the card in your telescope in the top, middle or bottom influences your final score depending on how well your opponent is doing in each of those areas as well. Deciding whether to place a card in your telescope or notebook influences your scoring multiplier across one of five different card types. These are all things you’re considering on your turn as you simply draw and place cards. While the actual actions are straightforward, the strategy is immense.

While I love the deep strategic elements at play here, I will stress that if you’re looking for a more relaxed two-player experience with a significant other or friend, this is not the right game for you. You have to be prepared to wrap your head around the many concepts and scoring conditions to fully feel like you’re grasping this game’s core concepts and making plays that feel good and pay off in a rewarding way. While this isn’t necessarily a cutthroat game like Arboretum or Biblios, it’s very much one where you’ll be disappointed by an end score if you were just sort of following the motions and not really strategizing during your turns. 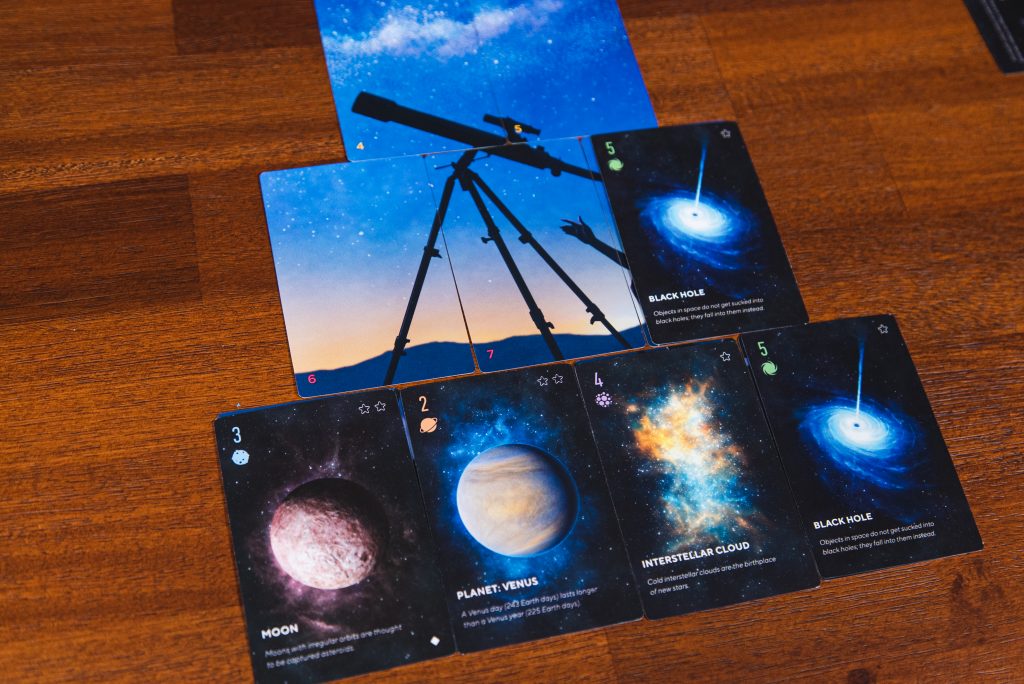 It’s also worth noting that for a small box game, this takes up a LOT of table space. The telescopes that players create during setup are fairly large and when I played this with my partner, we only barely fit this game on a regular sized coffee table. So even though this is a small two-player game, you won’t be able to play this one while travelling, for instance.

While the actual actions are straightforward, the strategy is immense.

If you’re someone who loves strategy in your games and feeling rewarded for thinking out moves and planning ahead, you’ll get a ton out of Stellar. Every turn is filled with strategy and critical thinking. No move can be made haphazardly as even the simplest of actions, like playing a card in your notebook, can have consequences for not looking ahead to see what that action would force you to play in your telescope. Stellar was so incredibly fun for me because of how much I appreciated the unexpected strategy it brought to the two-player genre of games, but I could see some people being turned off by this. 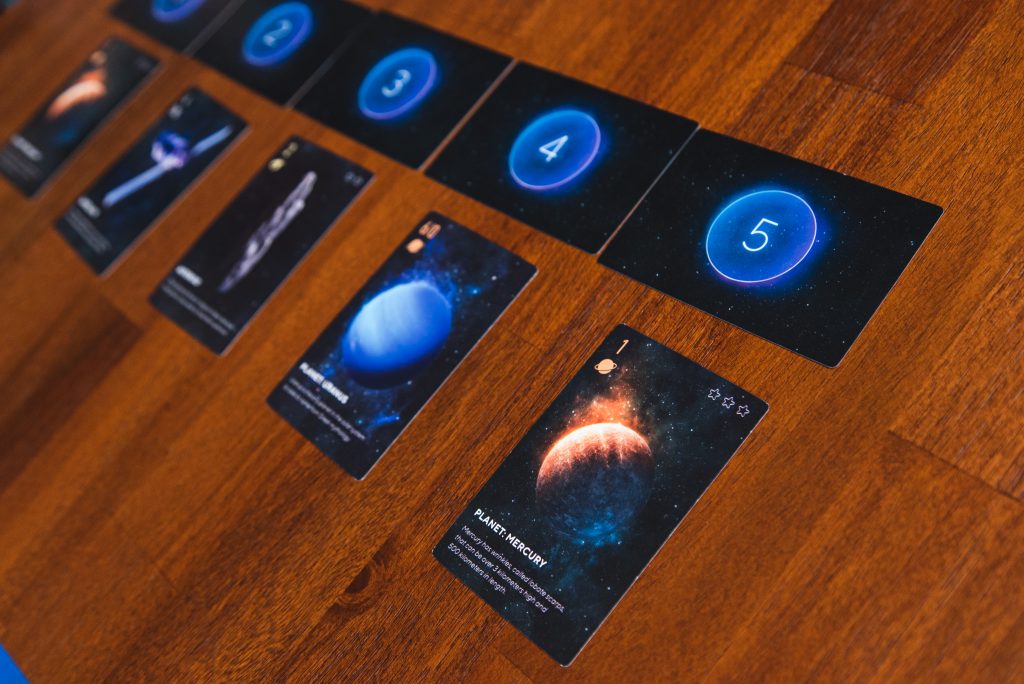 Also, since there are so many scoring conditions, I never really felt like I was ever out of the game. If I had some unlucky draws or plays for a specific type of celestial object, for instance, I could prioritize others to try and make up my points there. Or I could abandon the bottom of the telescope for the majority bonus and put all my stock in the top to try and balance out points with my opponent. 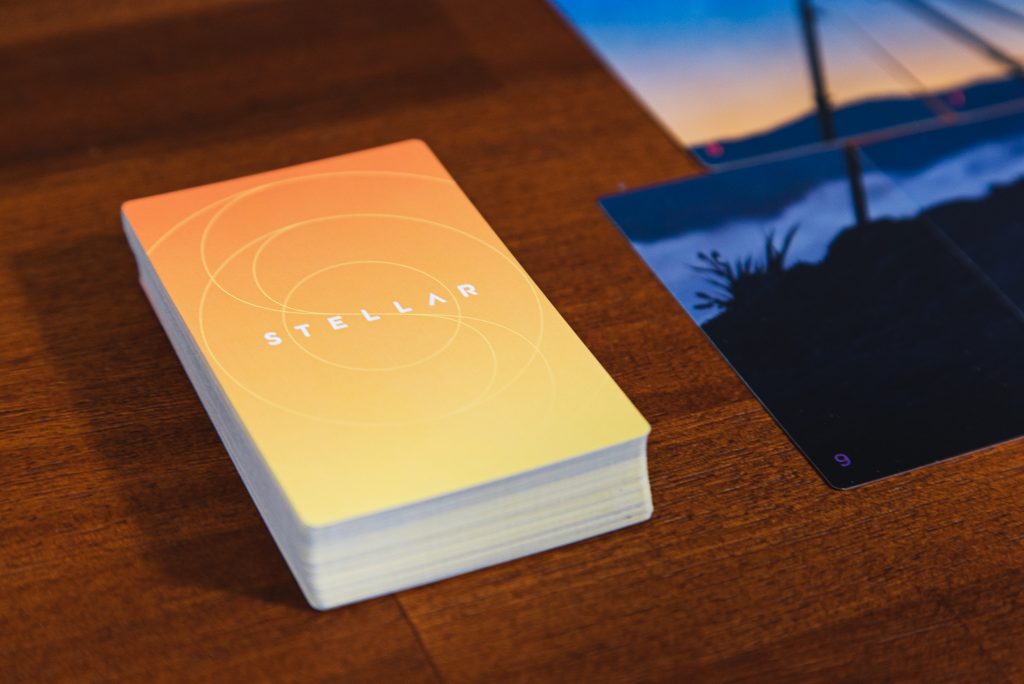 Every game of Stellar was loads of fun and offered something new to consider. This is one that I’ve always been happy and excited to come back to and I also feel like I’m a better player at the end of each new game.

For how much this game offers, you can’t go wrong with the value of it. Small, two-player games are already wildly affordable and with how deep this experience is, you really get your money’s worth. On top of that, the game hasn’t grown stale for me in any way, despite several plays over a short period of time.

On the other hand, this isn’t necessarily one of those games where you’ll sit down to play and end up going through multiple games in one sitting. Due to how much it demands of your brain power, I could see many playing a single game and feeling “spent” or like they’ve had enough and not being willing to play another round right then and there. While I’ve always come back for more later on, I’ve only ever played more than one game in a sitting a single time. 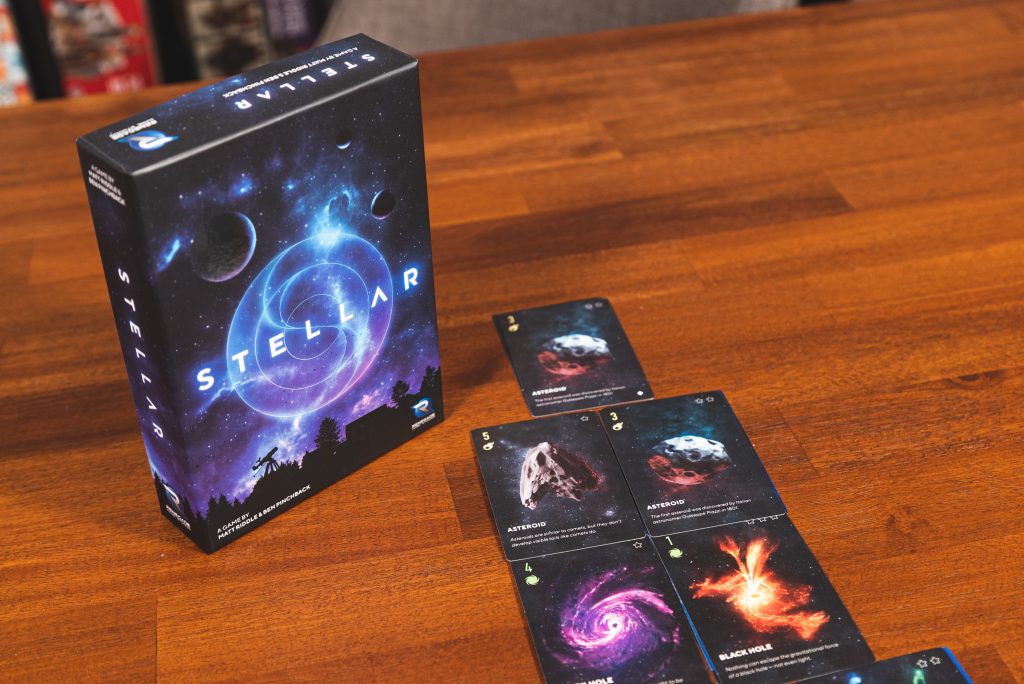 Stellar is in the upper echelon of strategic two-player games. If you’re looking for something with real depth that you can play with a friend or partner, Stellar should be at the top of your list. My criticisms are few and far between, but because of how much it demands of you as a player it won’t be the right game for every pair. Few games are universal across all types of tabletop gamers and when that’s a game’s major criticism, I’d say you’re in pretty good shape. This is a beautiful, complex and rewarding game that I’ll be returning to for a long time.

Artwork and Components
9
Design
9
Fun Factor
9
Value
8.5
8.9
In terms of deep, two-player experiences, you'd be hard-pressed to find better options than Stellar. You're constantly presented with fun and challenging decision-making opportunities and rewarded for how you tackle them. Although the complexity might catch some off guard or alienate them altogether, those who appreciate this type of experience are in for a real treat. This small game packs a big punch.
Reader Rating: (0 Rates)
0