Top 5 Kickstarters We’re Most Excited About in Jan 2020

The age-old problem for a board gamer: too many games, too little money.

Well, unfortunately (or fortunately?), 2020 isn’t shaping up to cut us any slack in this regard as January has kicked off 2020 with some huge and exciting Kickstarter projects that will have you reaching for your wallet over and over again.

Let’s take a look at some of the standout titles in this month’s AYCB Top 5 Kickstarters of the Month!

Let’s start off with definitely the most talked about title of the month on Kickstarter, Return to Dark Tower. This is a reimagining of the original Dark Tower game from 1981 and is being brought to life by Restoration Games. Even more exciting is the fact that this title has two big names behind its design: Isaac Childres of Gloomhaven fame and Rob Daviau, designer of Pandemic Legacy: Season 1 and 2. 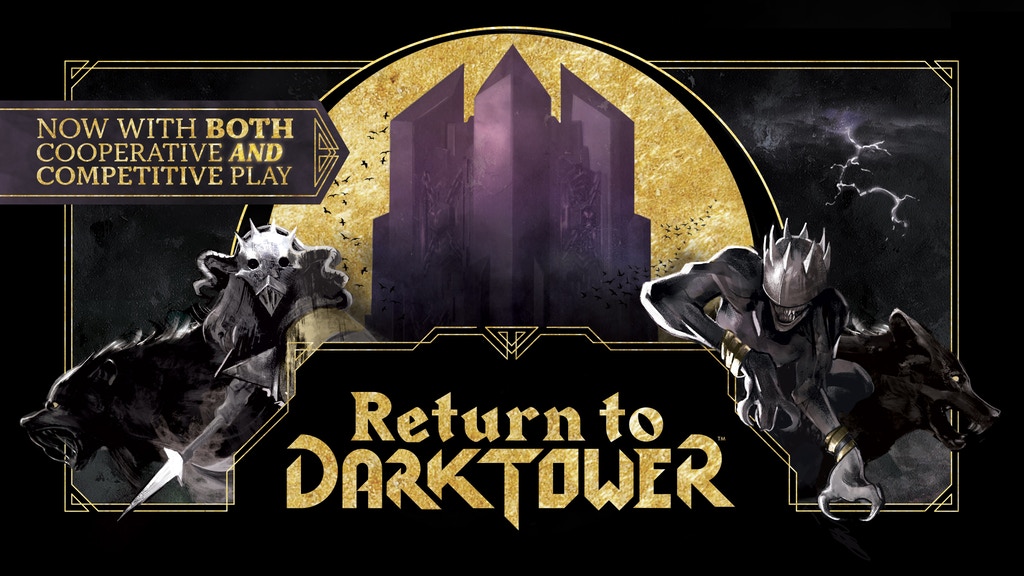 Return to Dark Tower is a 1–4 player game where players will be undertaking quests, fighting fearsome enemies and testing themselves against the looming darkness of the titular tower. Speaking of the tower, that is very much the highlight of this project: a 300mm tall mechanical tower that will fully interact with each game you play. You’ll be dropping skulls into the top of the tower and 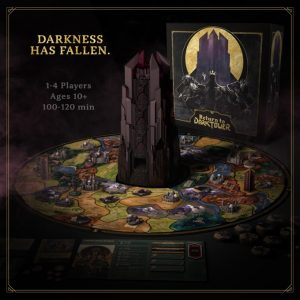 watching it spit them out in all different directions onto the board.  There is also an app that integrates with the game for even more technological immersion.

This one isn’t cheap; the introductory price will set you back $125 US, but the campaign has already crossed $3 million dollars US and continues to climb, so to call this a success would be an understatement. We’re curious and excited to see all the Dark Tower has to offer, when Return to Dark Tower launches to backers in February 2021.

OATH: CHRONICLES OF EMPIRE AND EXILE

Next up is another hotly anticipated game, this one from Leder Games. Oath: Chronicles of Empire and Exile serves as their follow-up project to Root. This is a game for 1-6 players with legacy-like gameplay without being a fully fledged legacy game. The game you play will alter and change between sessions, but there is no narrative, destruction of components, or end point. This is a really interesting concept and might scratch an itch for those who love campaign and legacy elements, while providing the same everlasting experience regular board games do.

Oath’s playtime is also very reasonable at 45 minutes to 2 hours and promises easy-to-learn gameplay as well. Leder Games describes the gameplay by saying that players will spend their turns in Oath adventuring within the Chancellor’s realm and the lands around it. They will gather support, recruit warbands and discover secrets, while populating the world with a cast of characters. They also go on to say that world is a shared tableau between players.

The full rules and a print and play version of the game are available for download, so if you’re interested to see what this game is all about, you can easily do so before deciding whether or not to 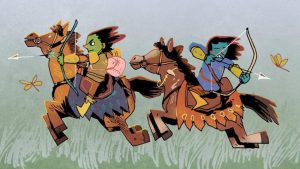 There is a single pledge level of $90 US for this one so again, not cheap, but for fans of Root, it definitely looks like another solid title you’ll want to get your hands on.

Rocketmen is a modern space exploration deck-builder for 1-4 players and comes from Martin Wallace, author of Brass and Age of Steam to name a couple. This game looks to be heavy on theme and the comments and previews coming out on it so far all seem to indicate as much.

You’ll be launching space missions whose main objectives are exploration of three destinations: Earth Orbit, the Moon and Mars. Players receive secret personal goal cards at the start of the game, which seems to imply that each game will have a bit of a new feel and twist to them, depending what you are striving for each time you play. 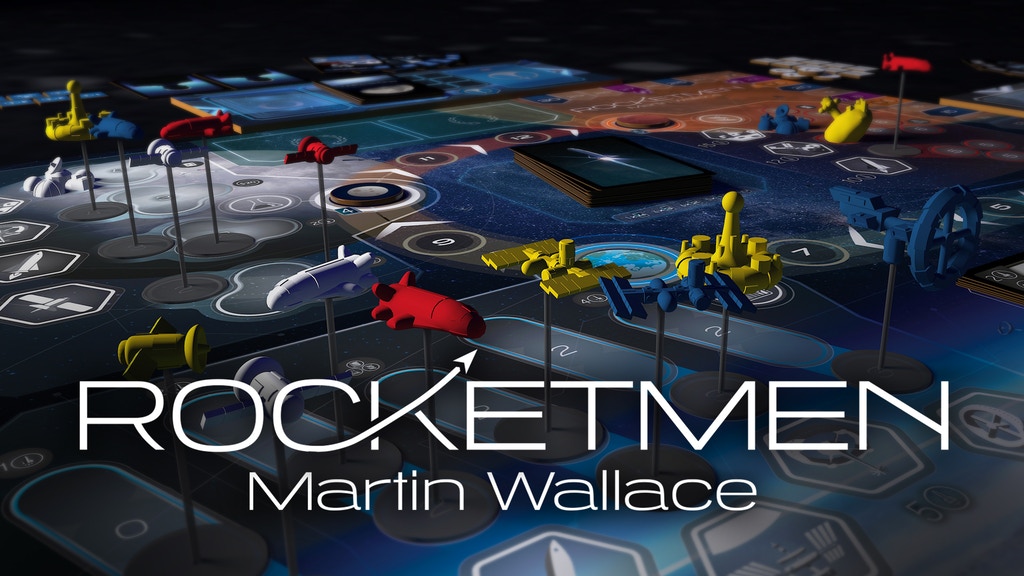 On your turn, you’ll be buying cards from the display, placing cards on the launch pad, discarding cards, or launching a mission. The main card types will serve multiple purposes, serving as currency with which the players can buy new cards, or as resources, means of propulsion and types of mission players would like to accomplish. You’ll use cards in your hand to buy new cards from the display and build up your deck. 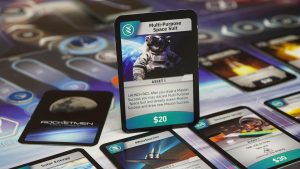 The most unique aspect of the game is definitely equipping your rocket for flight. You’ll be trying to get the necessary amount of engines and resources to do so.

At a starting pledge amount of $30 US, this is a very reasonably priced campaign to get into and promises some great fun for fans of the deck-building genre.

This is another big Kickstarter project this month from Emerson Matsuuchi and Arcane Wonders. In fact, it’s also a Kickstarter-exclusive project so if you’re interested, make sure to back it before it’s gone!

Foundations of Rome is a city building game for 2-4 players, but also has a 5th player expansion to extend the player count even further. And for fans of miniatures, there are a lot of them, in the form of a supply of buildings that each player will have to draw from and build the main city on the City Board. Each game, the city on the main board will be different, making each game unique. In the same way that it can be fun to look at a finished game of Carcassonne from above and see what you’ve built, this game promises that same kind of satisfaction. 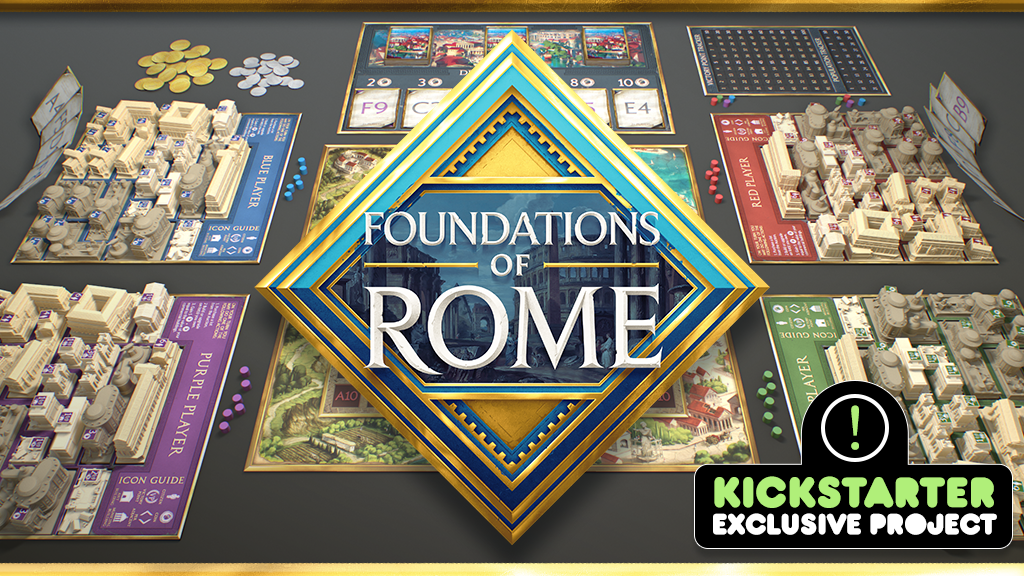 At $100 US, this is another one that isn’t cheap to get into, but it’s hard to argue with that price tag when you see just how much you get. The box looks massive and the amount of buildings that come in it are staggering.

This is one of those games that we’re not just excited to play, we’re  excited to see it on the table.

And finally, a 2-player version of a game we had a ton of fun with. We backed The Networks and, as television fans, thoroughly enjoyed it. It had a great theme that was well implemented, as well as a lot of humour. The Rival Networks takes the original game and reworks it as a 2-player affair. Considering that we mostly played The Networks at 2 players, this is an exciting prospect for us. 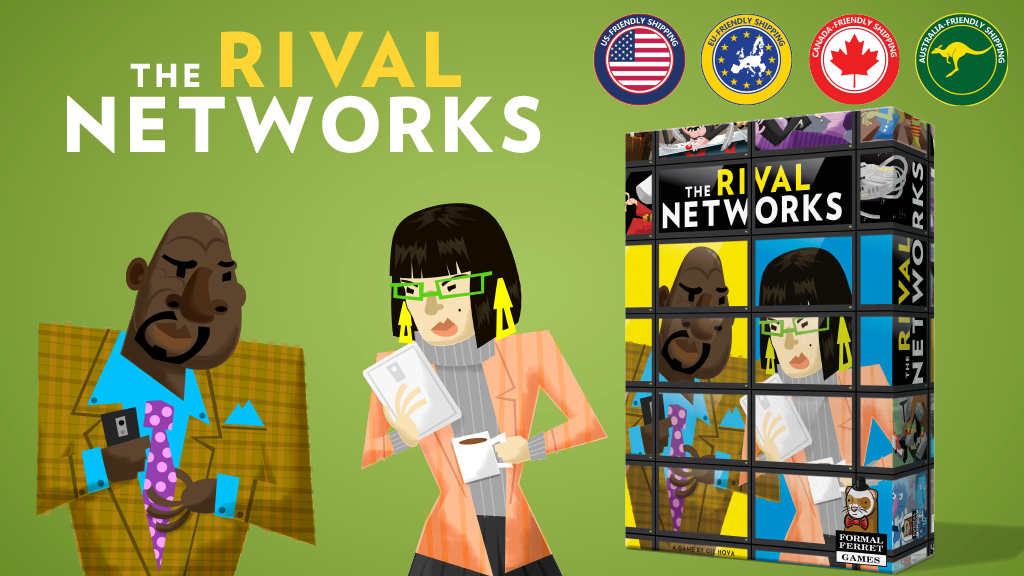 This is a standalone game and doesn’t require the original to play. It plays in 30-45 minutes, meaning a nice and quick experience. You and your opponent are TV network executives trying to gain the most viewers over 3 seasons. You’ll take show cards, star cards and ad cards on your turn to do this. You’ll then have to place the shows into different time slots and spend your ads to buy powerful Network Cards that give you new abilities. 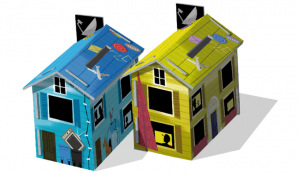 This card-drafting, tableau building game seems to retain and improve on the great sense of humour the original game had. There’s even a cute and nifty 3D punchboard house to hold your viewer tokens in!

At $25 US, this is the cheapest game to back on our list and we’re excited to see how well The Networks has been adapted for 2.

And those are the top 5 Kickstarter games for January 2020 that have us most excited. This was a big month for games on Kickstarter and a lot of titles  didn’t make the list that could have, such as Tortuga 2199, Star Realms Deluxe, Masters of the Night, and Genotype. All of those deserve your attention, even if they weren’t on our list.

One thing is for certain: If every month in 2020 is as packed with quality Kickstarter campaigns, we’re going to need to get second or third jobs to be able to afford them all.

PAID JOBS FOR A GAME PROJECT