Top 5 Kickstarters We’re Most Excited About For November 2020

Last month’s list featured a lot of expensive titles with stunning artwork and presentation. This month, we’ve got some more affordable options to tell you about. What these games might lack in component quality or visual appeal (at least compared to last month’s list), they make up for with some novel concepts, or familiar concepts executed in new ways. 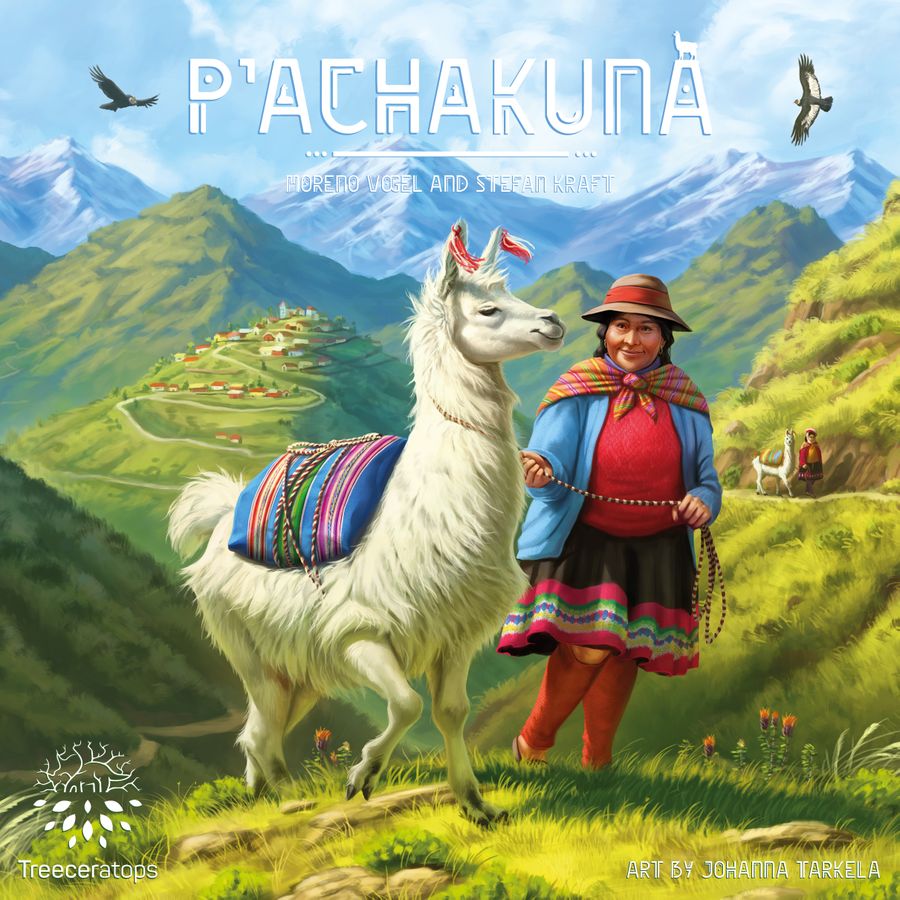 This 2-player pick-up and deliver game features a modular board with hexes that players will manipulate to create the most efficient network of routes. Of course, each player does this with the help of a trusty llama, because who doesn’t love llamas?

In P’achakuna, you and your opponent are traders in the Andes, trying to transport 7 dyes of different colours to specific villages. The player with the white llamas can only travel on the green valleys, while the player with the black llamas can only traverse the mountains. Players can rotate the double-layered hexagonal tiles to alter their routes to their benefit, or even alter their opponent’s route to make their journey more difficult. 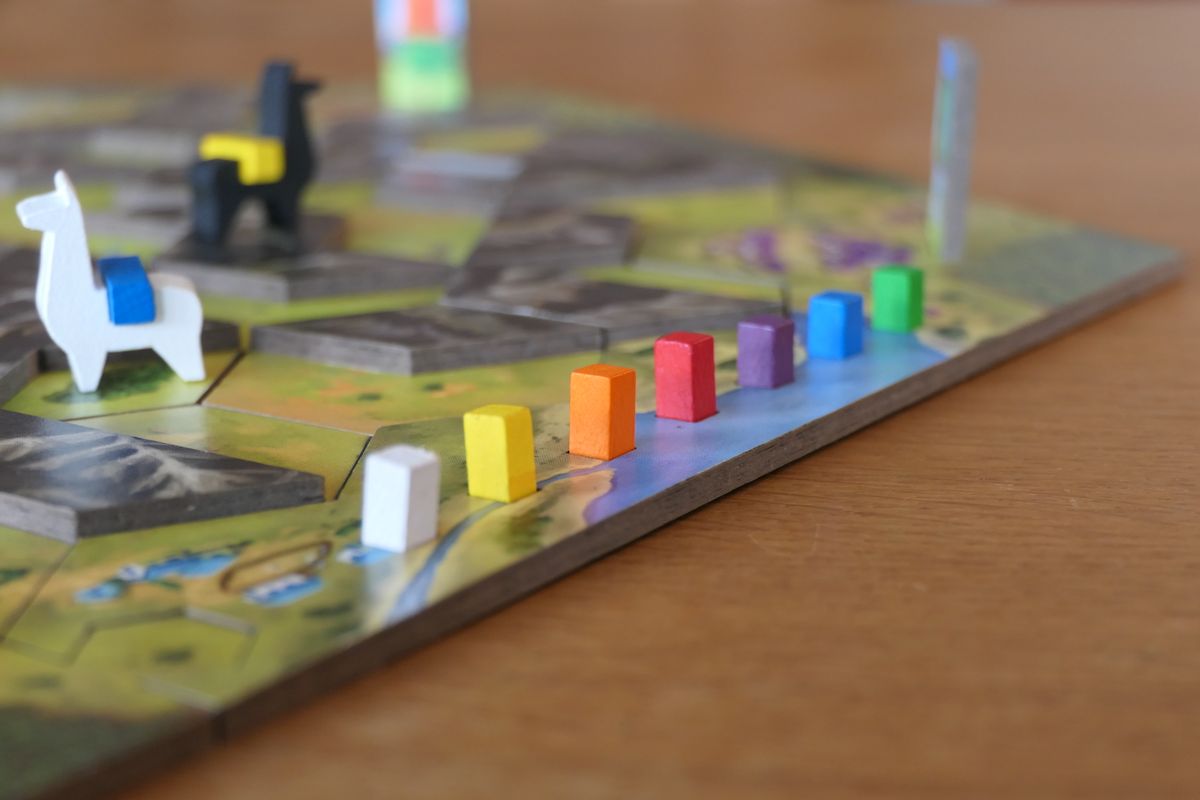 After delivering a dye to a village, players will gain resources that they can then use to buy more llamas or rotate more pieces on the board. The player that delivers all 7 dyes first wins.

Check out their Kickstarter page to see the cool stuff that comes with this across different pledge levels, from authentic Bolivian handmade bags to tiny, plush llamas. The game is a wonderful tribute to such a beautiful place and culture.

Since it only plays with 2 players, you’ll need to factor that into your decision about whether or not to back this. I really like what I see but $24 for shipping to Canada might ultimately be too steep for me. 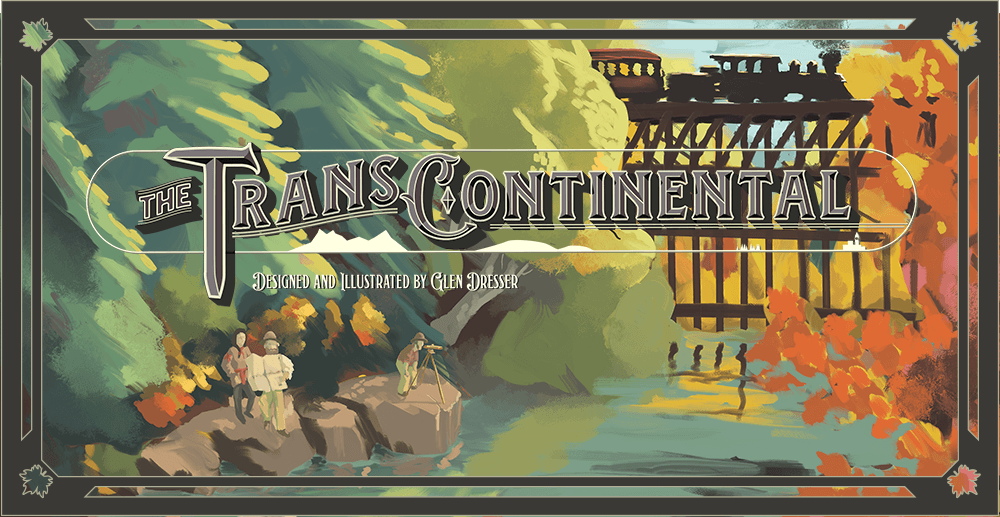 From Bolivia we head on up to Canada for some more pick-up and deliver action. As a Canadian, I was drawn to this right away, especially after seeing that Glen Dresser won the 2019 Canadian Game Design Award for it. This medium-weight Euro game for 1-4 players about the development of the Canadian transcontinental railway offers a unique approach to worker placement.

Players send out telegrams in advance to spaces of their choice on the railway track, determining which actions they’ll be able to take along the way once they arrive at those locations. Each turn you can take two actions, a combo of one on each side of the track.

The production value here is really nice, and it’s clear a lot of care and attention to detail has gone into making this game. Glen Dresser designed, illustrated, and published the game himself. It’s extremely thematic and sensitive to the historic impact, featuring characters representing those who were actually affected by the construction of the transcontinental railway. Even if you don’t expect to back this, you owe it to yourself to check out the Kickstarter page and see for yourself how impressive and cohesive this whole package really is. 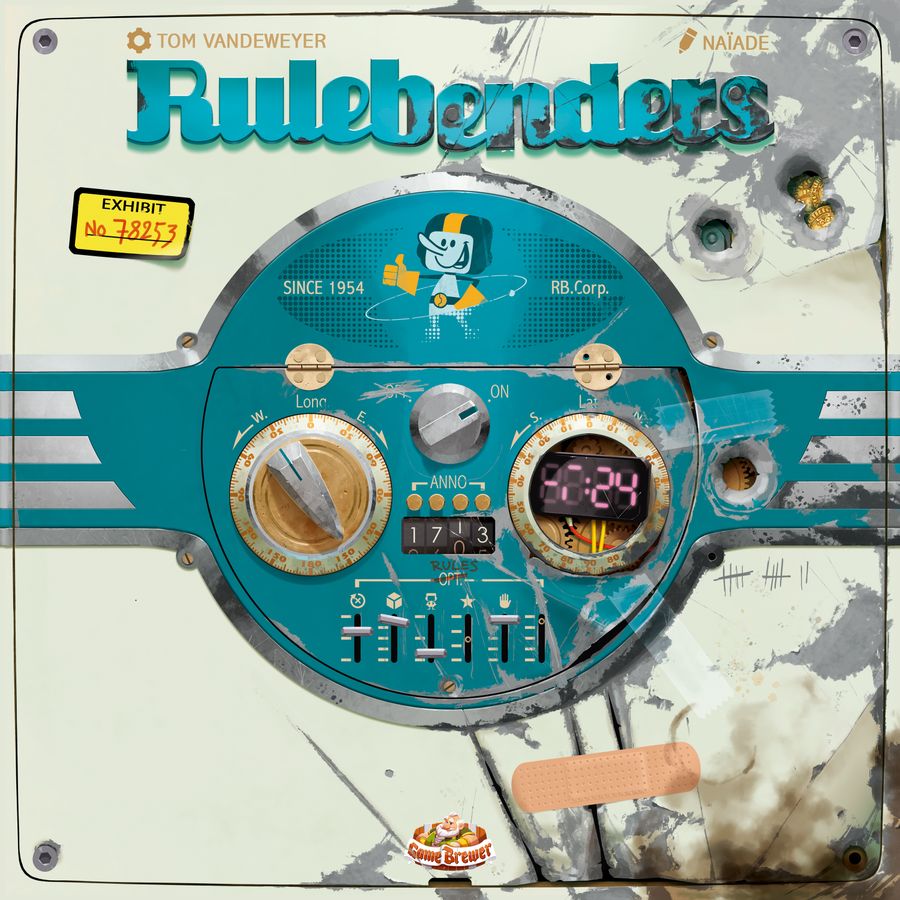 Nobody likes to play with cheaters who break the rules, but what if everyone at the table is actually expected to bend the rules? If you’ve played Fluxx before, you’re familiar with this idea, but Rulebenders looks to take this concept to the next level. 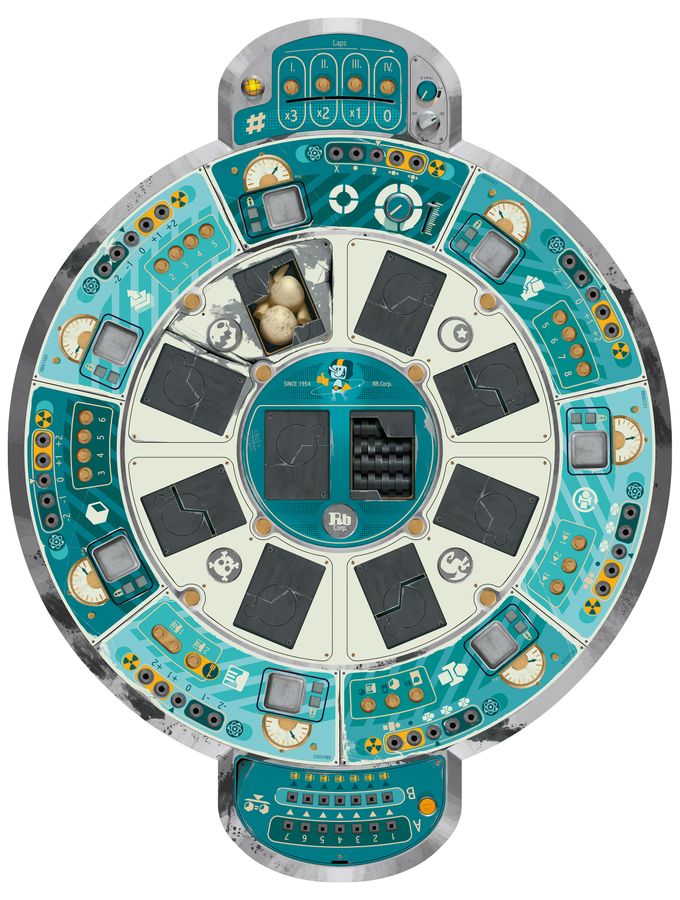 In Rulebenders, you’ll discover a machine that allows you to travel across various themes including sci-fi, pirates, zombies, and more. You and your opponent(s) will fight for the ability to bend the current rules of the game, modifying separate modules to tweak aspects of the game such as hand size limit or requirements to complete certain tasks.

Players can bend the rules specifically in their favour or they can bend rules in an attempt to thwart their opponents, resulting in a level of player interaction that requires you to pay attention to what everyone is doing at all times.

With fantastic artwork from Naïade, variable setup of themes (each game uses four out of the six included) and over 250 cards, there’s a lot to like here. This might be a little too chaotic and unpredictable for some, but if you’re looking for something different that allows you to tweak the way the game plays as you go, you should definitely check out Rulebenders. 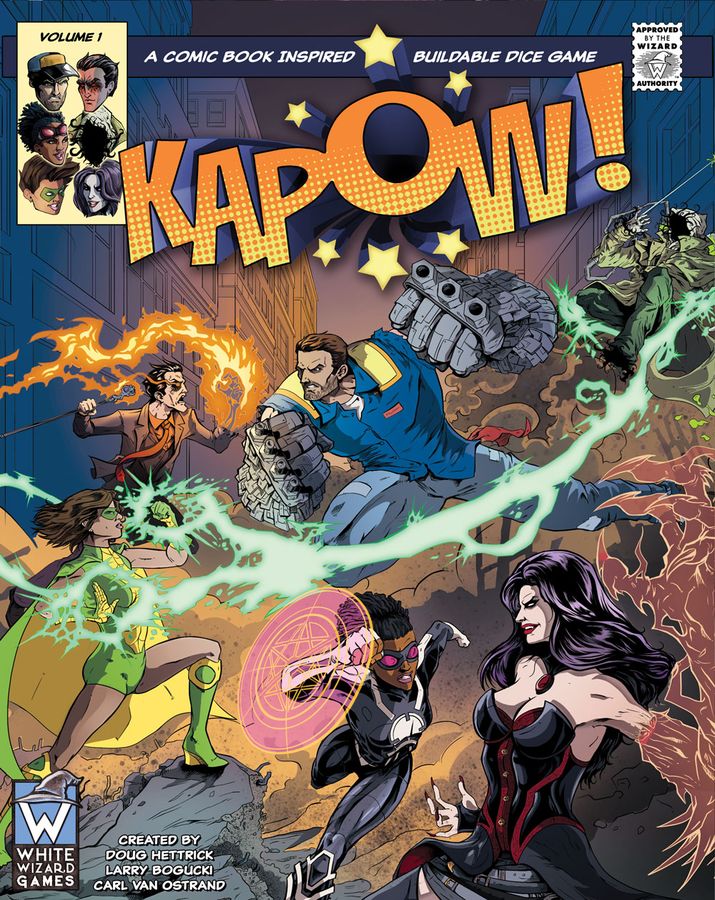 We rarely include games on these lists that would be considered re-releases, expansions, new editions of older games, and so on. But we just heard of KAPOW! and there’s so much new content here that we feel it deserves its place on this list. 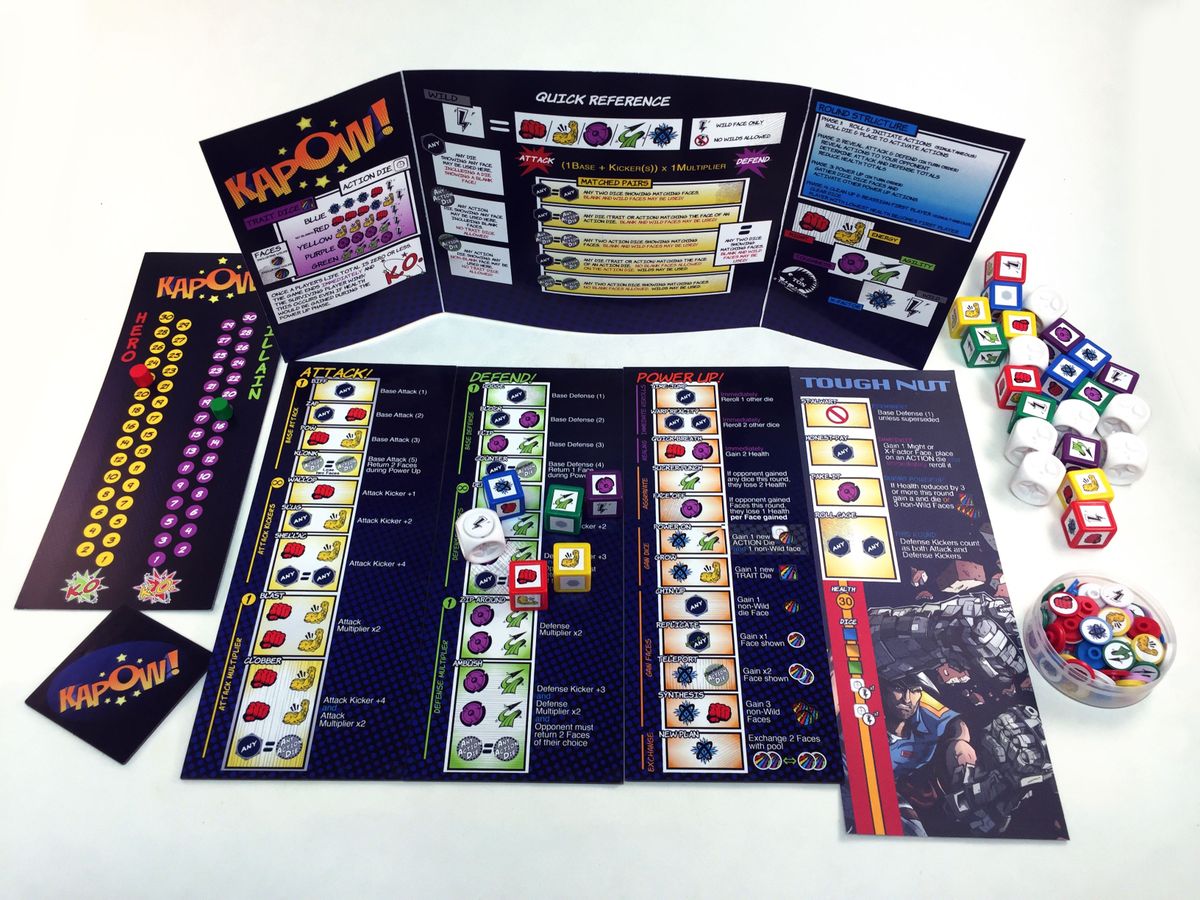 A 2-player super-powered buildable dice game, KAPOW! is brought to you by White Wizard Games, the same company behind Star Realms and Hero Realms. In this head-to-head battle game, one player plays as the hero while the other plays as the villain. Each player’s choice of character determines their starting trait dice and special abilities. You can even gain blank action dice with customizable die faces, allowing you to create the specific dice you need to execute your strategy. If you’ve played Dice Forge, that part might sound familiar to you.

Players roll their dice behind their screens then secretly allocate those dice to attacks, defense, and power-up abilities. Players then reveal their choices and resolve the outcomes, leading to battles reminiscent of the style of the old Batman cartoons. Hence, KAPOW!. You have to choose how and when to grow your dice pool and customize your action die faces to tailor your approach.

This campaign features Volume 1 and Volume 2, each Volume being its own complete game. Each set comes with different heroes and villains, allowing you to choose the one you prefer. Alternatively, you can select the TEAM UP pledge level which includes both volumes.

Elements of the Gods 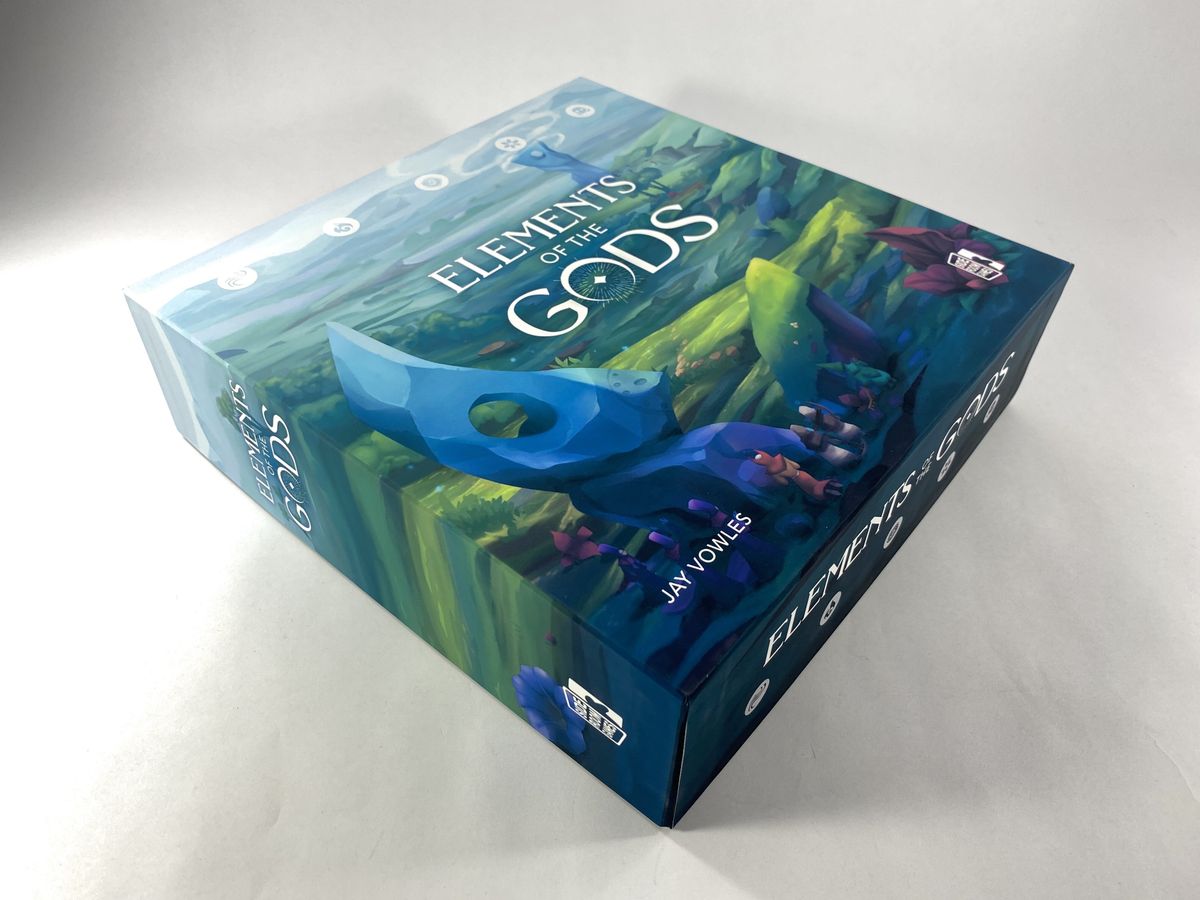 Elements of the Gods is a 1-5 player strategy game of territory building and area influence. Throughout the game, players will activate elemental powers to maneuver worshippers (meeples) on the board in an attempt to match the pattern cards in their hand. You’ll construct monuments and score points by planting gardens and performing rituals at those monuments. You’ll also score points at the end of the game from the worshippers you’ve gathered.

The elemental powers of Water, Fire, Wind, Earth, and Death each work in unique ways, allowing you to gain more worshippers, gather them, scatter them, move them together, or even cause those worshippers to die, removing them from play. Monuments, Gardens, and Divinities provide additional scoring opportunities, but some of them can be claimed by your opponents as well if you’re not careful with your placement.

On one hand, I’m often drawn to games like these that feel like they provide so much room to explore and experiment without a bloated, excessive ruleset. On the other hand, it looks like the options increase every turn as the game progresses and the board state develops, meaning it could lead to some serious analysis paralysis as you start to feel like there are endless combinations and possibilities to explore each turn.

For some, that openness will be a massive selling point. For others, that freedom will be too much and you might freeze up as you try to calculate every possibility in front of you. If you like area influence games that let you go in any direction you want and play a different game every time, take a look at Elements of the Gods. The chunky components and colourful meeples certainly don’t hurt.