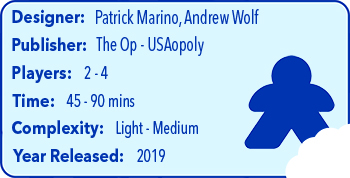 It seems every year brings more new board games than the last. While many of these games still find a way to create new and exciting game concepts that pique our interests and have us wondering, “How did they think of that?”, many other games use tried and tested mechanics and lean more into the familiarity, sometimes even borrowing from or expanding on proven, successful games. Harry Potter: Death Eaters Rising is the latter case, but I don’t want that to sound negative. Not every game has to be wholly new and many concepts and mechanics out there haven’t been explored nearly enough. This game takes systems and ideas from games like Ghost Stories, paints them with the extraordinarily popular Harry Potter brand and makes them more accessible. The result is a family-friendly, cooperative title that’s fun and challenging, even if it does sometimes struggle to compete with the game that seems to have inspired it.

Harry Potter fans will have a lot to love here. The game is rich with Harry Potter branding and features the likenesses of all the actual actors from the movies on its cards. You’ll also recognize all the locations on the Place cards, as well as the three major affiliations you can choose to side with, and it’s impossible not to mention the larger He Who Must Not Be Named figure that comes with the game. While its purpose is mostly insignificant, relegated to just simply being turned left or right, it’s a lot more appealing and welcomed than a simple cardboard token or card. 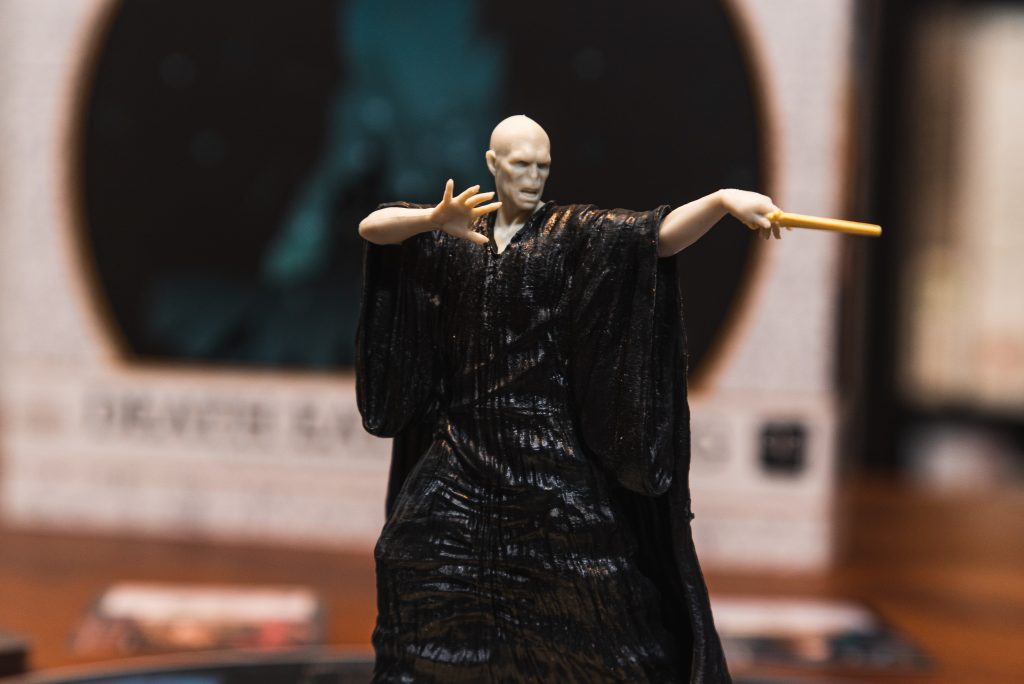 I didn’t have any real issues with any of the components or overall presentation, but it’s definitely made for Harry Potter fans. Not that the game isn’t enjoyable without that attachment, but with how much it leans into its theme, I feel like this game, more than others, relies on strong knowledge of the source material. At the very least it’ll lead to a better experience.

I’m a big fan of cooperative games and always welcome more options in the niche. Death Eaters Rising is a good option that makes you work together throughout. You’ll constantly be offering advice during other players’ turns, planning your next turns with each other and trying to work out the best strategies in order to avoid the many loss conditions and work toward defeating He Who Must Not Be Named. The only thing I’ll caution is that there’s definitely potential for quarterbacking due to the amount of planning involved in each turn. You may often feel like you want to do one thing, but be convinced by others that it’s best to do another, based on what the rest of your teammates are looking to accomplish.

This is a dice-rolling game first and foremost, and early on before you recruit enough Wizards to sway the dice in your favour, your success will greatly depend on the luck of the dice.

As I alluded to, Death Eaters Rising reminded me a lot of Ghost Stories, a fantastic cooperative game. In that game, you and your teammates are battling ghosts and working together with your unique abilities to survive through their onslaught before the final boss, Wu-Feng, emerges. In Death Eaters Rising, you are similarly battling Death Eaters, while attempting to survive long enough for the final boss to emerge from the deck. There are surely differences in the way the games play out, but it’s hard to deny that the foundations are very similar, and I have no problem with this comparison; Ghost Stories is a great game and I’m happy to see another game use some of those systems to engage a new audience at a more entry level, while still providing a challenge. 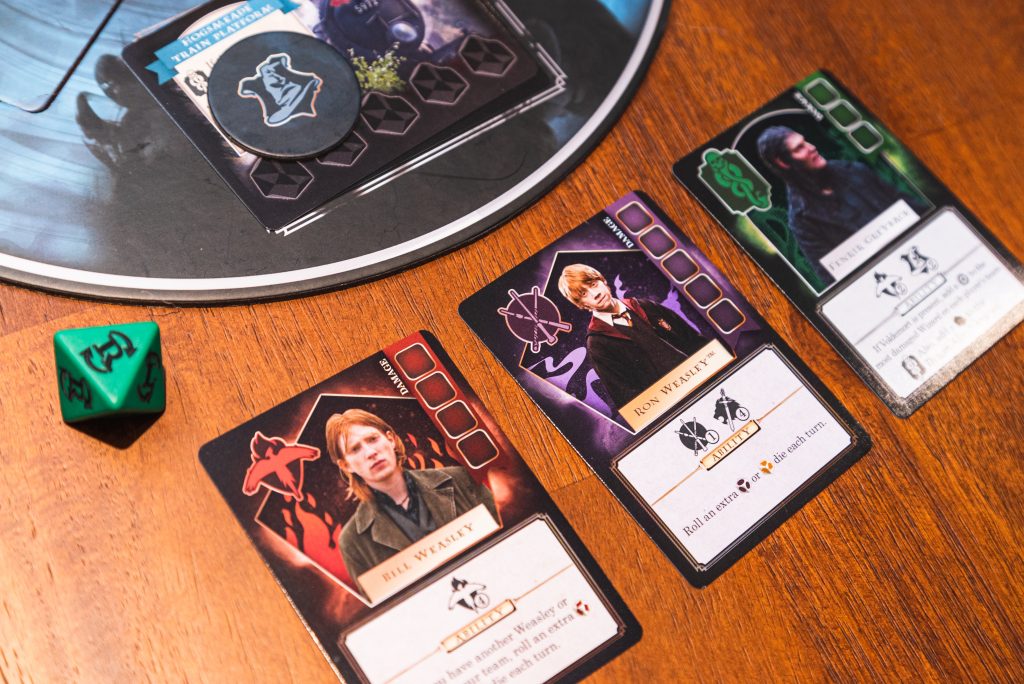 The main issue for me, however, is that having played Ghost Stories, I just find it to be the stronger game. If I’m in the mood for this style of cooperative experience, unless I’m playing with a few big Harry Potter fans, more often than not I’d prefer to play Ghost Stories over Death Eaters Rising because the unique mechanics that Ghost Stories offers are more compelling. That being said, for a more introductory group, a group unfamiliar with Ghost Stories or a group that has big Harry Potter fans, Death Eaters Rising is a great choice and might even be a preferable choice.

Another issue I had with Death Eaters Rising was that luck factor being too significant. This is a dice-rolling game first and foremost, and early on before you recruit enough Wizards to sway the dice in your favour, your success will greatly depend on the luck of the dice. I’m all for some luck in my games and I actually don’t mind dice-rolling mechanisms at all, but in a cooperative experience where you’re strategizing and planning with multiple people, it can be disheartening to have all your planning and discussions be for nought because of some unlucky rolls of the dice.

I definitely had fun playing Harry Potter: Death Eaters Rising. The challenge was surprisingly high and thus, I always felt I had something to strive for and a good reason to strategize and plan with my teammates. And it’s rewarding to finally recruit that powerful Wizard you’ve been working on, or defeating that one Death Eater you’ve all been damaging. You feel clever when you use a spell token to swap advantageous cards with teammates to give them an edge before they roll their dice. This game succeeds at its cooperative elements, which is hugely important. 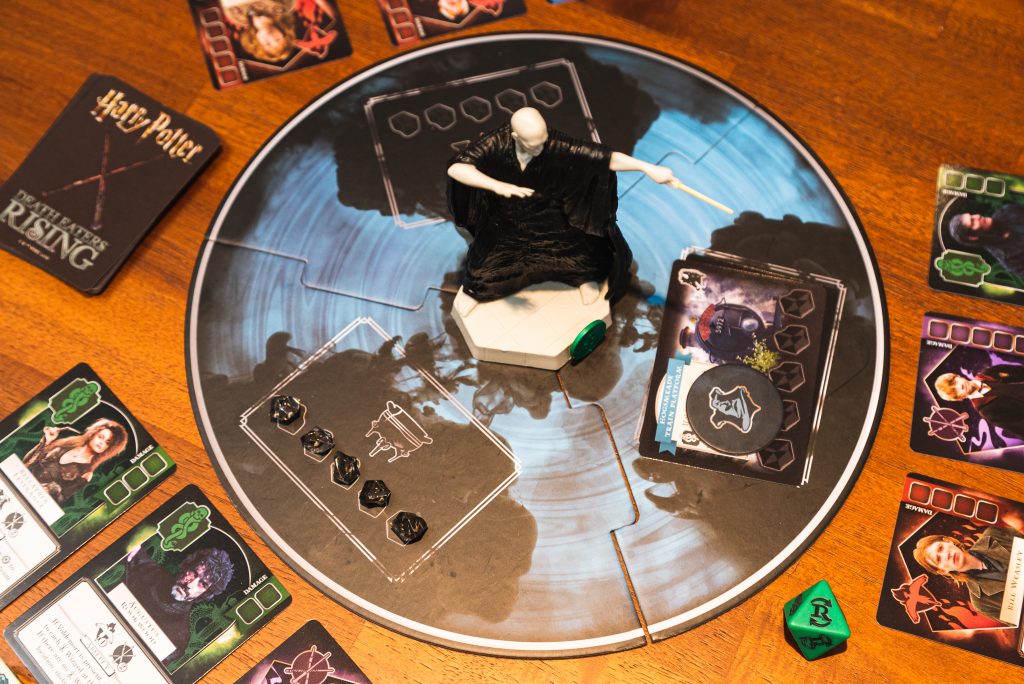 Going back to the dice rolling, though, there were also moments where after careful planning, thoughtful discussions and several turns of work, plans completely fell through because the dice I rolled were the incorrect traits. And while failure in cooperative games is to be expected and is necessary to make you want to keep coming back, this kind of failure just took some of the wind out of our sails and felt less engaging and fun.

On the flip side, the anticipation of seeing how the dice ended up and the shouts of glee or frustration were constant. My favourite part of dice-rolling games is how it brings the table together in celebration or agony. This game has a lot of that and especially for younger audiences, I think the dice will be much more of a hit and present opportunities for some great moments.

Depending on the skill level of your group and the luck of your rolls, this game could take several tries before you defeat He Who Must Not Be Named, and even once you do, there are of course other affiliations and Wizards you can start out with to alter the experience slightly. However, after you’re able to confidently defeat the villain, I could foresee the waning desire to continue coming back. Ghost Stories offers multiple final bosses and a random one is shuffled in each game, so it can take many plays to discover them all, let alone defeat them all. Death Eaters Rising only offers one villain so the variety is largely coming from discovering and recruiting all the different Wizards. But even then, many share the same abilities so this will only take you so far.

The challenge was surprisingly high and thus, I always felt I had something to strive for and a good reason to strategize and plan with my teammates.

In terms of physical value of what you get in the box, as I said before, I have no major complaints with the components or quality. The entire package feels premium and the large statue is a welcome addition. The dice themselves are also very well made and are a joy to handle. 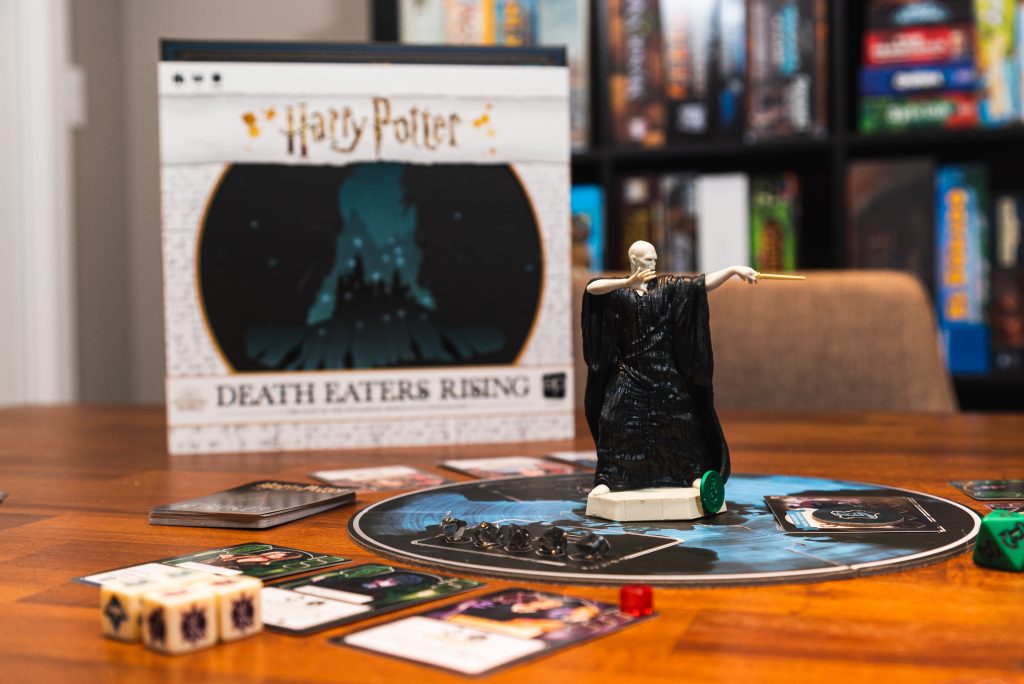 Overall, this is a very fun cooperative game that will appeal to those who are newer to cooperative games in general, are fans of Harry Potter or haven’t dealt with these kinds of mechanics much before. If you’re like me and have played Ghost Stories, you might find that playing this game produces an itch to actually go play that title next time, but this will vary from group to group and depend also on the strategy level of the players.

In general, though, it’s a game that uses the Harry Potter brand in some clever and interesting ways, provides a good amount of difficulty and offers several opportunities for exciting moments with the dice-rolling aspects. There just might end up being some unavoidable frustrations with your dice rolls that will make you wish you could cast Obliviate on yourself.

Artwork & Components
8
Design
7
Fun Factor
7.5
Value
7
7
Harry Potter: Death Eaters Rising is a challenging and fun cooperative experience that sometimes relies a little too heavily on luck, but contains no shortage of memorable moments and opportunities for strategizing and planning with your teammates. There might be better, similar options out there, but for Harry Potter fans and those new to the mechanics, this is a great option and one you’ll be sure to enjoy.
Reader Rating: (1 Rate)
7.4

With so many board games coming out, you have to ignore most of them, but sometimes you miss some real gems.