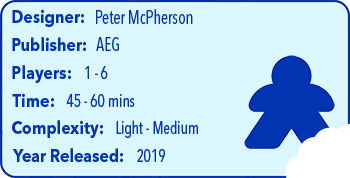 Rarely does a game hide its meanness as well as Tiny Towns.

The basic concept of the game is challenging enough, as you try to squeeze as much as you can into your tiny 4×4 grid. Tiny Towns looks like a cute, friendly little game featuring these happy critters, but beneath this guise looms a degree of nastiness that’ll make even the nicest people feel okay about making their opponents get stuck with useless garbage. It’s a beautiful thing.

Tiny Towns mostly sticks the landing here with lovely card illustrations, a ton of wood building components, and the oh-so-glorious Master Builder hammer. Some wooden components in my copy arrived slightly misshapen, one even partially broken, and certain buildings have little bits that can easily snap off in the wrong hands. Every time someone uses the Master Builder hammer as a tiny gavel while declaring a resource, I cringe at the thought of it snapping between their fingers. 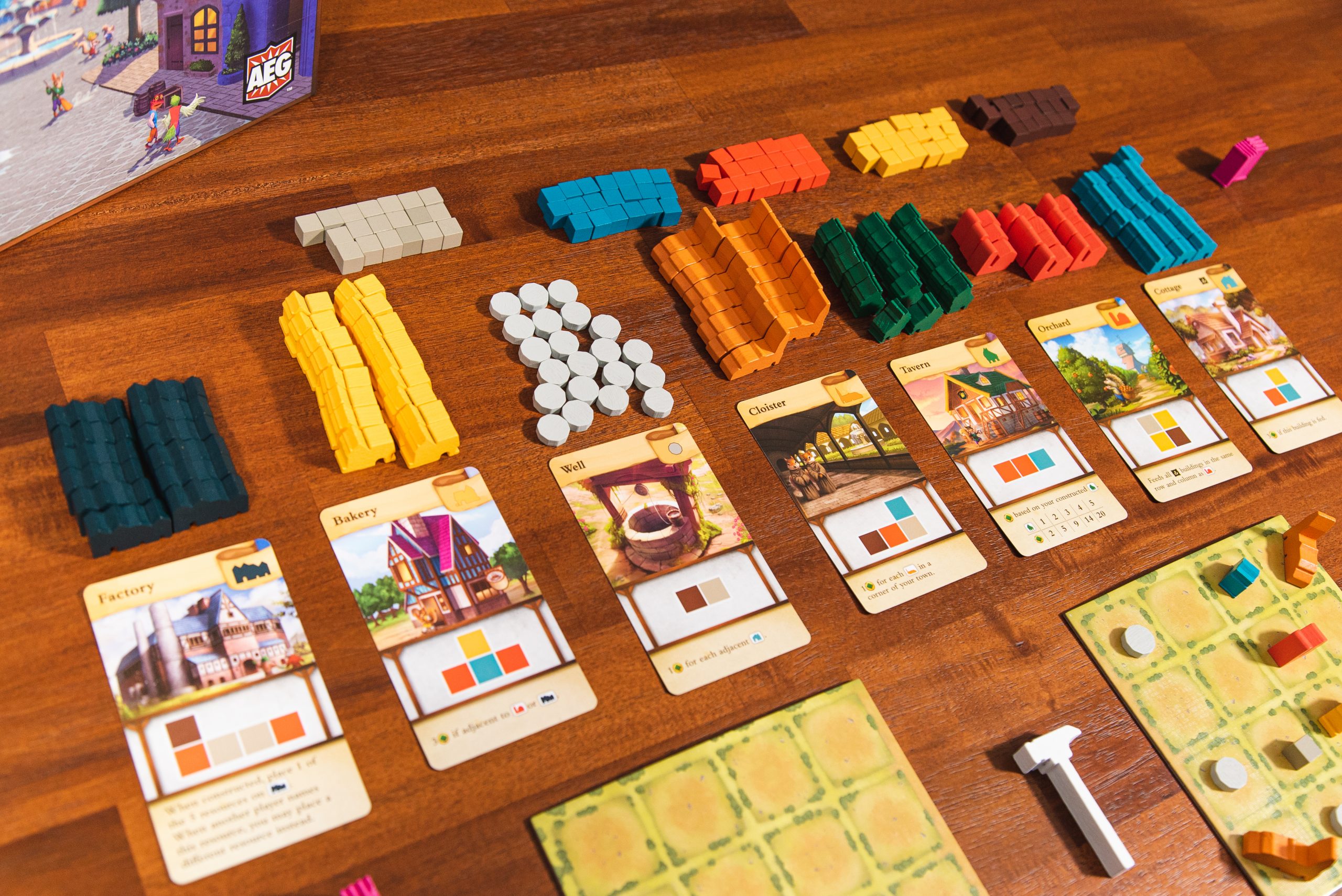 The resources (wood, wheat, brick, glass, stone) are just basic cubes, and the player boards are the standard green ones you see in many other games. At higher player counts (5-6), you might run out of certain colours of buildings. The rulebook says to use replacements if necessary, but it’s a shame that a potential shortage of components even makes that possible. Of course, I’m nitpicking here, as this all depends which buildings are available and who chooses to build which ones. 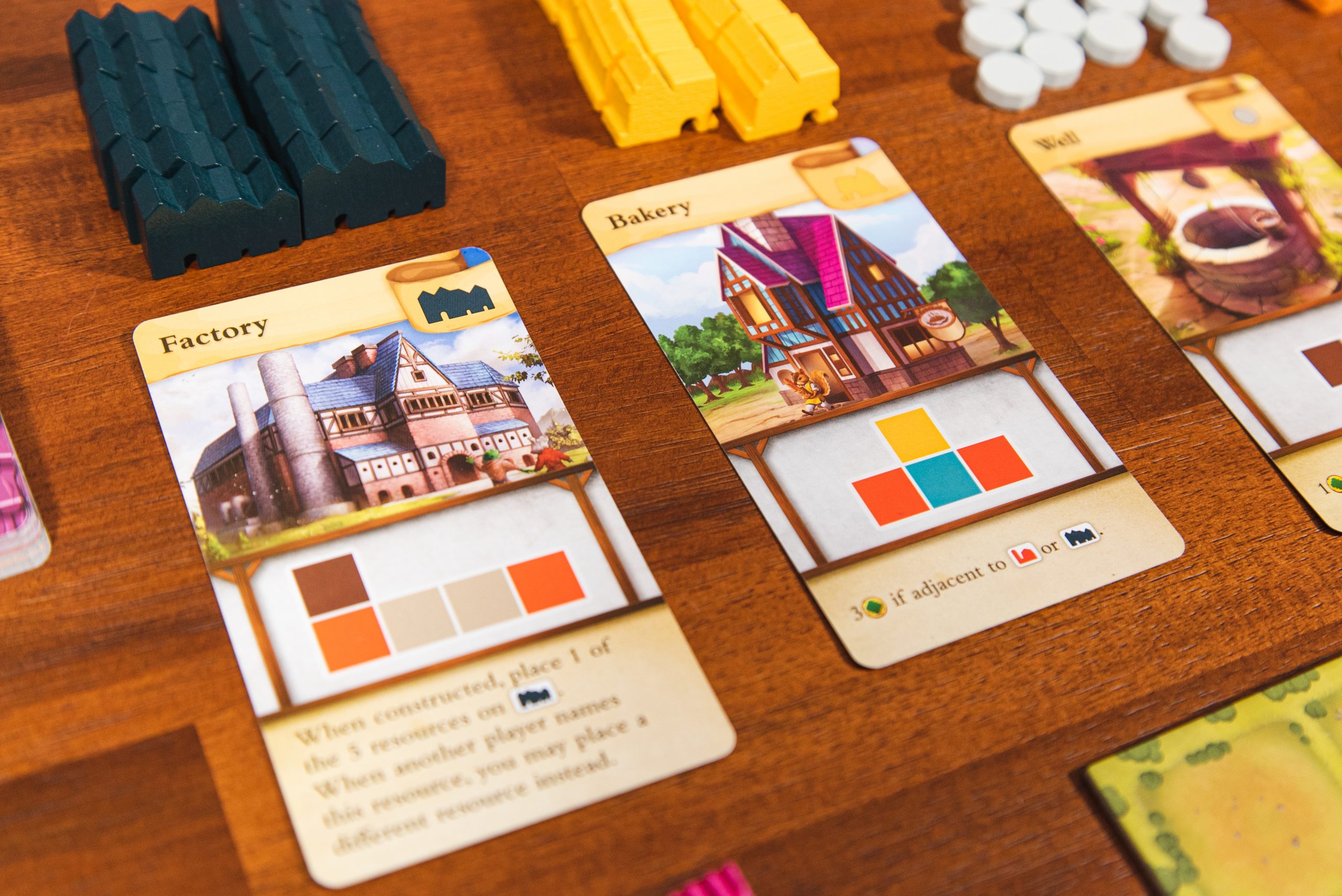 The theme in Tiny Towns is minimal but perfectly suitable. It’s a relatively short, puzzly game and I don’t think it needed more depth of story or characters. Maybe there was a bit more room for personalization and extra detail, but it wouldn’t serve any purpose to the gameplay itself, so I have no qualms here.

This is Peter McPherson’s first design, which makes this all the more impressive. With help from developer Josh Wood, who designed Cat Lady and Santa Monica, McPherson injected some crucial mechanics that really tie everything together to make Tiny Towns an addictive, highly replayable game.

I’ve played Tiny Towns at least a dozen times now, and even in my best games, I’ve never quite achieved what I set out to do. Along with the variable setup of building cards (one of four from each colour, aside from the Cottage which is the only light blue one), you get your own personal Monument which you keep secret until you build it (if you choose to do so). The rapidly and frequently changing game state forces everyone to alter their plans after being stuck with resources they don’t want. You can try to specialize in a couple specific buildings if there’s an appealing combo out there, or you can choose to diversify. Each play offers a new set of options and strategies to pursue. Even if you play with the exact same setup, you can approach it differently.

The rapidly and frequently changing game state forces everyone to alter their plans after being stuck with resources they don’t want.

The Monuments help make Tiny Towns about more than just who can best complete their optimization puzzle undisrupted. Without these, players would see a lot more similarities in each other’s towns, and it would be a lot less interesting. You don’t have to construct your Monument, but it’s almost always a missed opportunity if you don’t capitalize on it. Some encourage you to build them early on, giving you an ongoing ability that you can use throughout the game. Others give you a one-time effect and/or additional points. I don’t have any issues about balance, but I don’t like how certain Monuments affect the game. 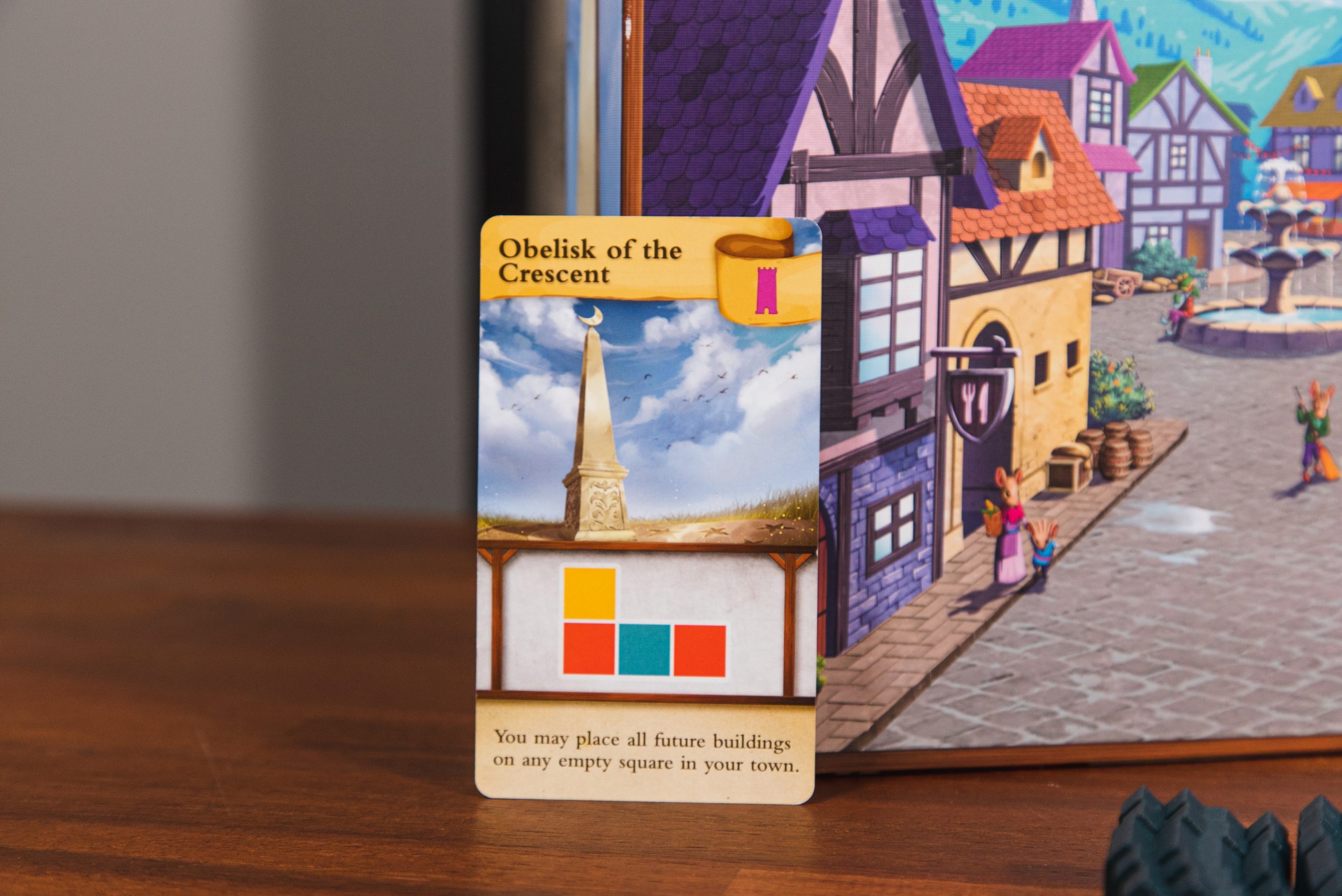 For example, Obelisk of the Crescent gives you the power to circumvent the game’s most interesting and challenging restriction by letting you place your buildings on any square. This reminds me of an excellent realization that Paul Peterson, designer of Guillotine, had after the game was published (which you can read about here). When I’ve built the Obelisk or seen someone else do it, that player usually wins and then they regret choosing it because it robbed them of the crunchy puzzle that makes Tiny Towns so engaging. It eliminates a lot of the tension for that player, and generally just feels like it devalues the gameplay. Thankfully, it’s entirely avoidable if you simply choose a different Monument instead.

One of my favourite aspects of Tiny Towns actually takes place before the games starts, while you have your two Monument choices in your hand. You examine all the buildings in search of synergies, you contemplate where and when to construct your Monument, you waffle about whether or not to go heavy into Cottages because you don’t know how many of them you’ll be able to feed. Perhaps most importantly, you see all the resources needed to construct all these buildings, and you need to anticipate how you’ll convert all those resources you’ll get. It doesn’t matter if you don’t want to construct buildings with stone. You’ll probably have to take glass and find a way to make it work. To have any chance of winning, you must succeed in both your initial strategic and ongoing tactical decisions. You might have a brilliant plan, but poor choices throughout can ruin everything.

The player interaction truly makes Tiny Towns so much fun. If all you did on your turn was choose the perfect resource and do exactly what you wanted, this would just be a multiplayer solitaire game about maximizing efficiency. Instead, it feels fantastic to wield the power of the Master Builder hammer in your own hands as you look around the table. You’re in control and it’s all up to you how much you inconvenience the other players. You name a resource, you hear the collective groans of your opponents, and you revel in their misery. Then, you reluctantly pass that hammer to the next player, and suddenly you fear people won’t forget what you did to them. 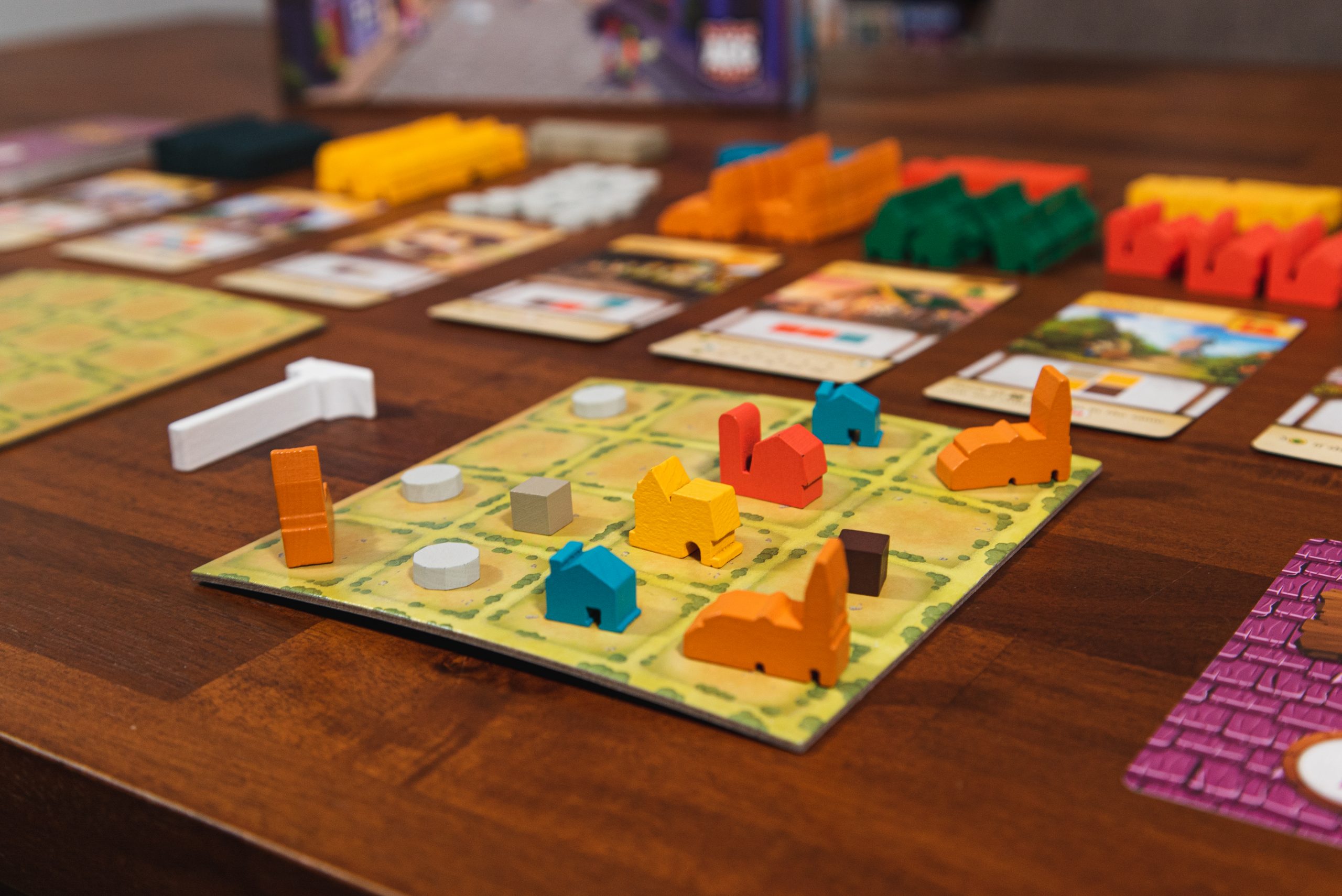 Since you’re technically still giving everyone at the table a resource, you can feel good knowing you didn’t actually destroy anything your opponent created. Your sinister intentions can hide behind your narrative of, “I gave you a resource that you’ll use to build something”. It pushes even the friendliest of care bear gamers to be a bit mean without feeling too guilty about it. I’ve seen some players emerge a bit from their shells and reveal a much more competitive side while playing Tiny Towns. It’s a wonderful sight to behold. 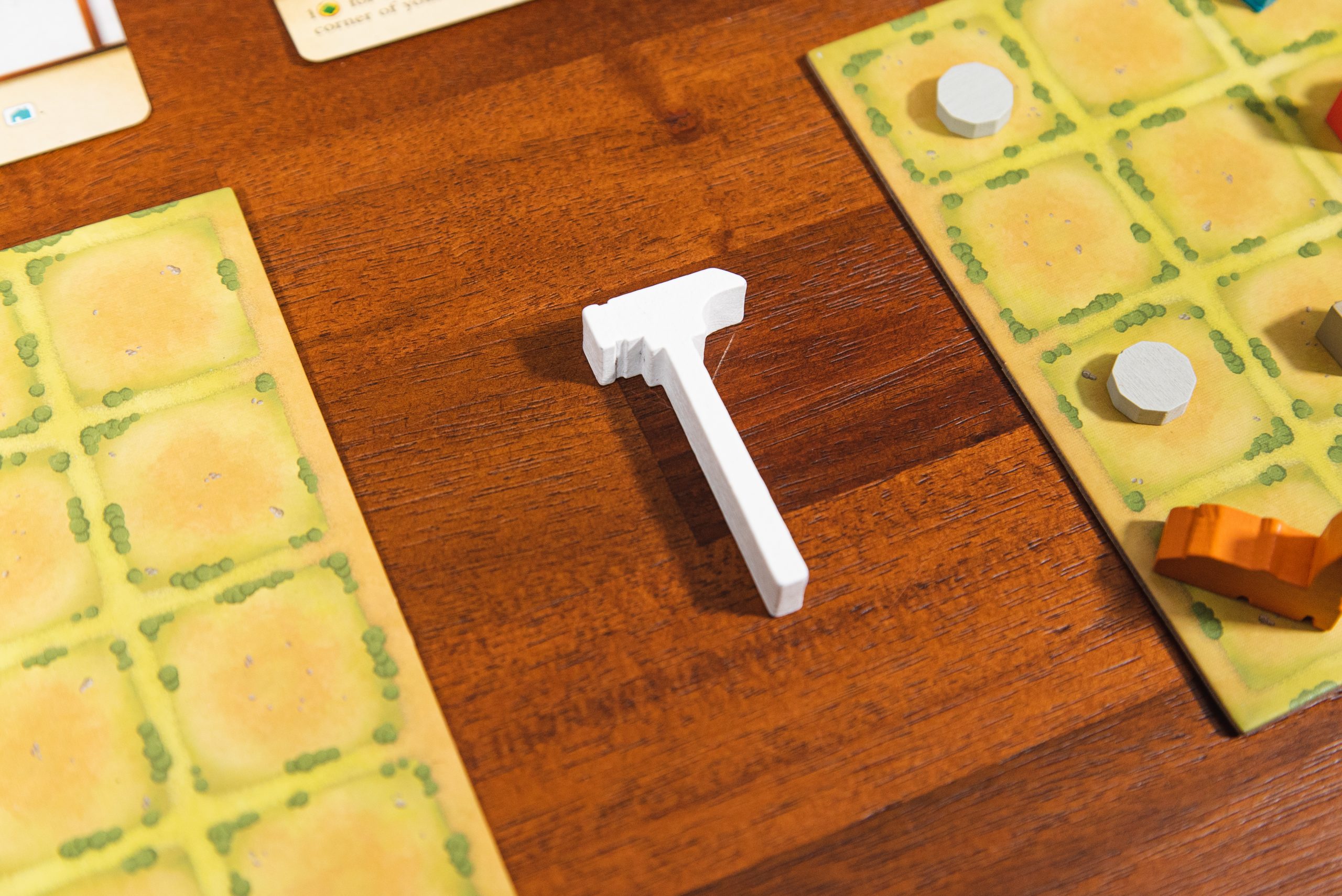 One bad decision can truly cost you the game. It’s a big part of what makes Tiny Towns so rewarding to win, but for some people, it might not be fun to realize you’ve completely lost any chance of winning less than halfway in. I don’t think it’s a problem because even when you have that hopeless feeling with so many turns left, you at least know you put yourself in that situation with a poor decision. You’re never frustrated by bad luck.

I’ve seen some players emerge a bit from their shells and reveal a much more competitive side while playing Tiny Towns. It’s a wonderful sight to behold.

Despite the 1-6 player count listed on the box, I prefer it with 2-4. With 2, you still get to choose your resource on half your turns, so that makes it a little less challenging, but your meanness is targeted at a single player. At higher player counts, you have even less control of the resources you acquire, you get to be Master Builder less often (which reduces the frequency of those fun turns), and you have more opponents whose boards you have to scour before naming a resource as Master Builder. Tiny Towns works perfectly fine with any number of players, but I think it really shines in that 2-4 range, with 3 being the sweet spot. Regardless, thanks to simultaneous play, there’s almost no downtime at any player count, until players get eliminated. Even so, I’d say the player who stays in the longest has earned the right to have everyone watch them take a few quick turns.

With 15 Monument cards and 4 of each building type from which to select for setup, even if you play Tiny Towns often, you’ll surely be satisfied with the longevity here. You get a lot of gameplay in that box for that price, and because the rules are simple and easy to explain, you’ll likely get it to the table even if you have a sizeable collection.

If you play it too much with familiar building combinations or the same people, the game might start to lose its charm and appeal. It’s not infinitely replayable, but it’s certainly above average. I can’t see myself tiring of it any time soon, but every time I finish playing I know I could’ve scored significantly higher if I had played better. 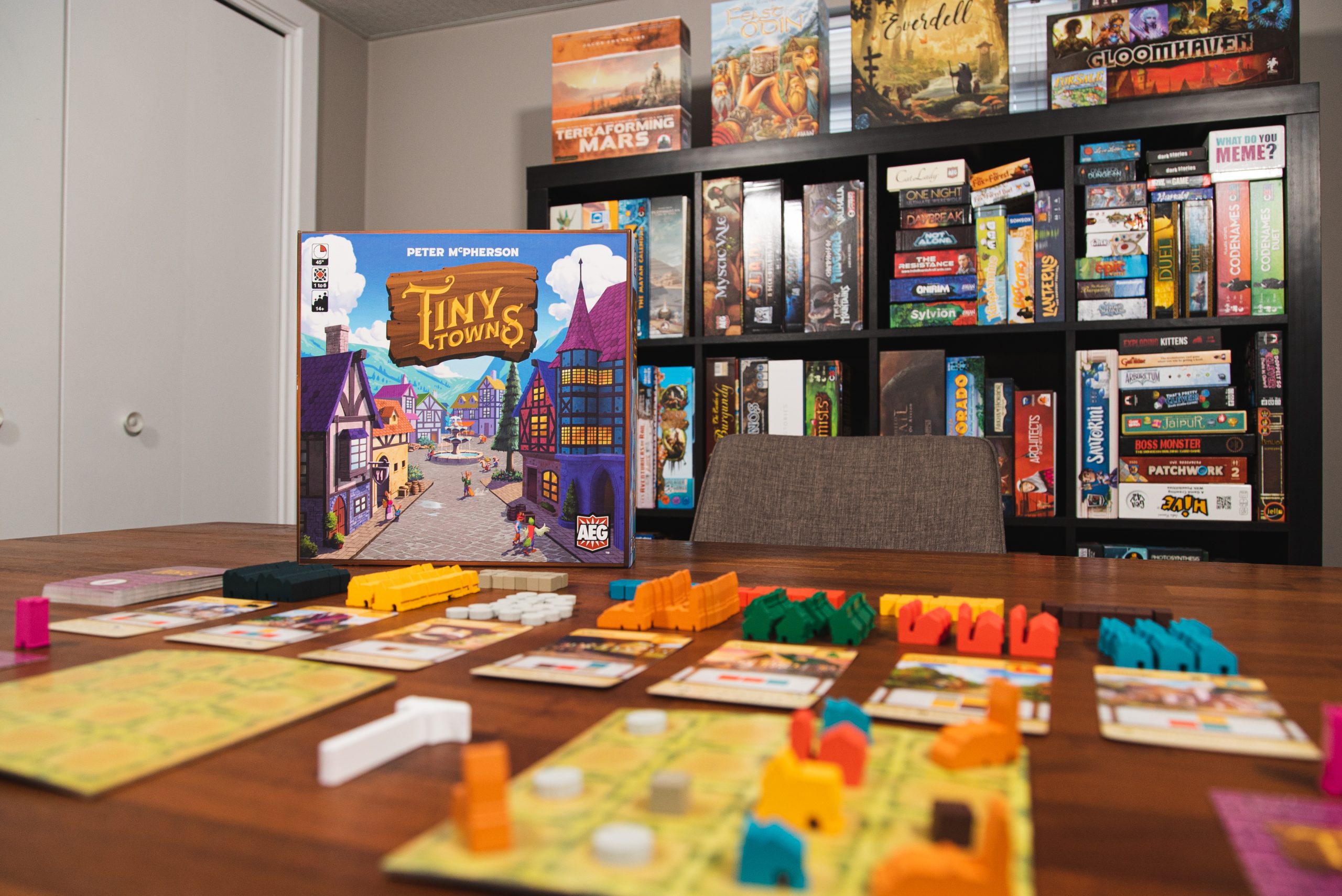 Tiny Towns is one of my favourite games of 2019, and I’m happy to have it in my collection. It’s unique, it’s tough, and it offers new avenues to pursue each time you play. It takes a really great game to extract this much strategic and tactical depth from relatively simple mechanisms.

So many things could’ve gone wrong with this design that would’ve held it back from being this good. The boards could’ve been 5×5 instead and the game would’ve been too long. There could’ve been no Monument cards and the game would’ve felt too repetitive and not interesting enough. Instead, everything clicks into place just as it should, from the deceptively mean (in a good way) player interaction to the varying strategies that emerge from the assortment of buildings and Monuments. The result is an extremely satisfying and replayable game with its own distinct feel. Highly recommended.

Artwork and Components
8.5
Design
9
Fun Factor
9
Value
9
9
Despite a couple forgettable flaws, Tiny Towns does almost everything right. It gives you a tough little solo puzzle to solve, and then it lets players mess with your plans in a sneaky way. This game is about choosing the correct resources when you’re the Master Builder and following through on astute planning by cramming as much as you possibly can into your town. It’s tricky, it’s unforgiving, and it’s fantastic.
Reader Rating: (0 Rates)
0