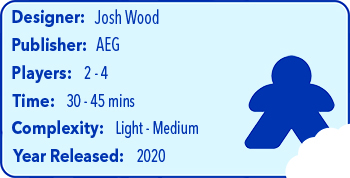 When you build something in a board game, you want it to really matter.

I love tableau-building games, but even some of the best ones can make you feel like acquiring the card is more important than what you actually do with it. Santa Monica lets you create your own little beachfront where the locations come to life, locals and tourists show up, and you need to use your limited move actions to get people to the right places before the game ends. You don’t want people just standing around doing nothing when there’s so much to see and do.

Jeremy Nguyen’s wonderfully detailed artwork delivers in every way, pulling you right into this relaxing, sunny setting. Everything comes together exquisitely, including the different locations, the unique art on every card, and the box art. Even the rulebook is a joy to flip through. 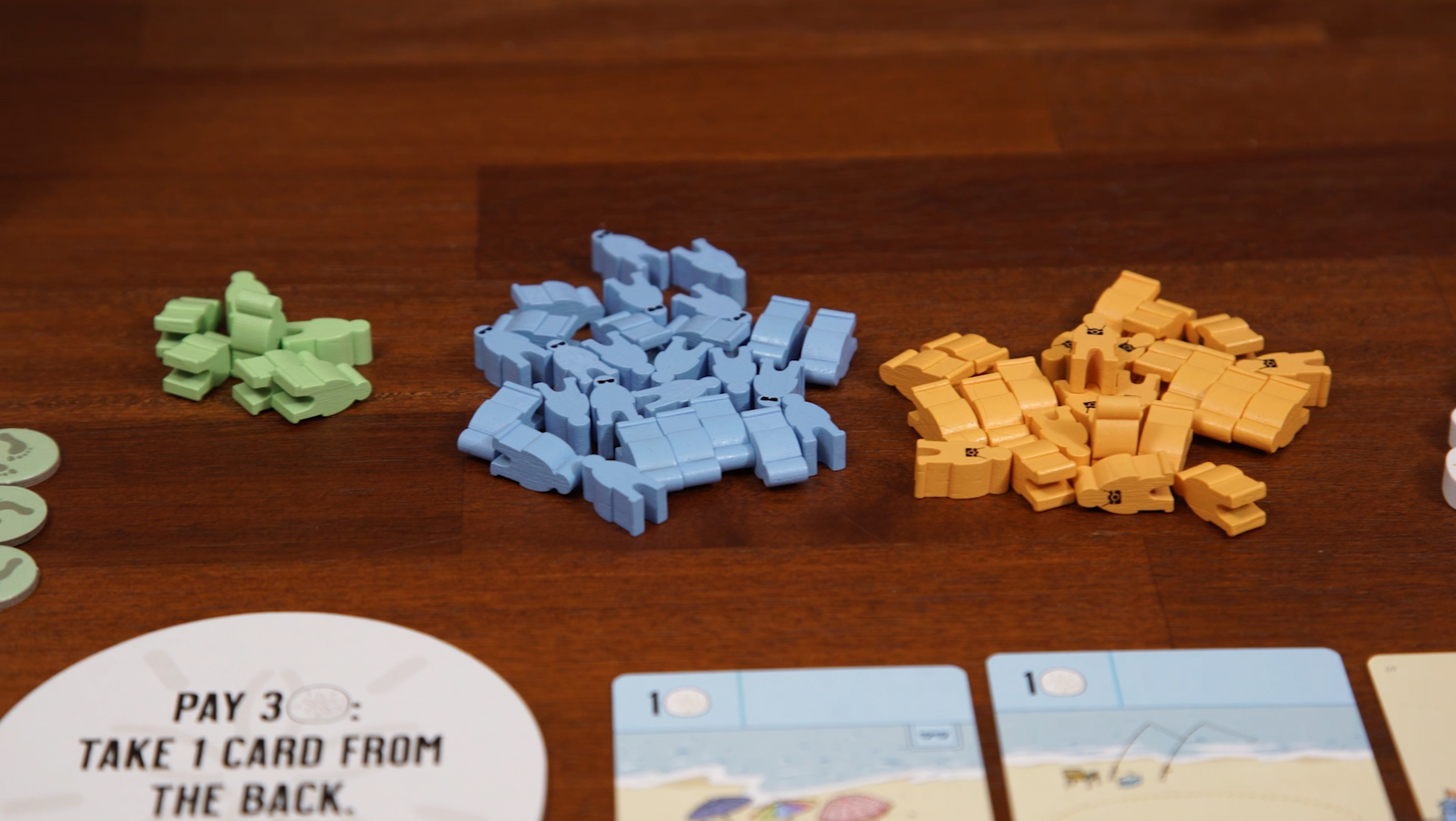 The iconography, while not perfect, mostly works impressively well. I expected a higher learning curve from Santa Monica, as is often the case with tableau builders due to the icons, but it’s fairly intuitive here, and usually once you ask a question or look up a rule you won’t have to check again twice. My only issues with the iconography are due to some minor misprints, such as inconsistencies (sand dollar scoring cards) as well as a couple cards having placement bonuses where the scoring opportunities are supposed to be. Once you know about these, you can easily move past them, but they might throw you off at first and cause you to spend some time figuring out what’s right and what’s wrong.

The rest of the components are fantastic as well. The locals wearing sunglasses and the tourists with cameras are really nice touches that give Santa Monica even more character and charm. Aside from the misprints I mentioned, I think Santa Monica knocks it out of the park from an aesthetic standpoint. It’s a shame the box is so much bigger than it needs to be, as half the box is empty space.

Even though I wouldn’t call Santa Monica entirely unique, the game has a few specific mechanics that help it stand out.

Building your tableau in two rows (beach and street) works amazingly well. It’s restrictive enough to force you to think hard about where to place cards, but with only a few options each turn, the flow of the game doesn’t suffer. You draft a card, potentially take a bonus from the Foodie or Food Truck, and then place your card. 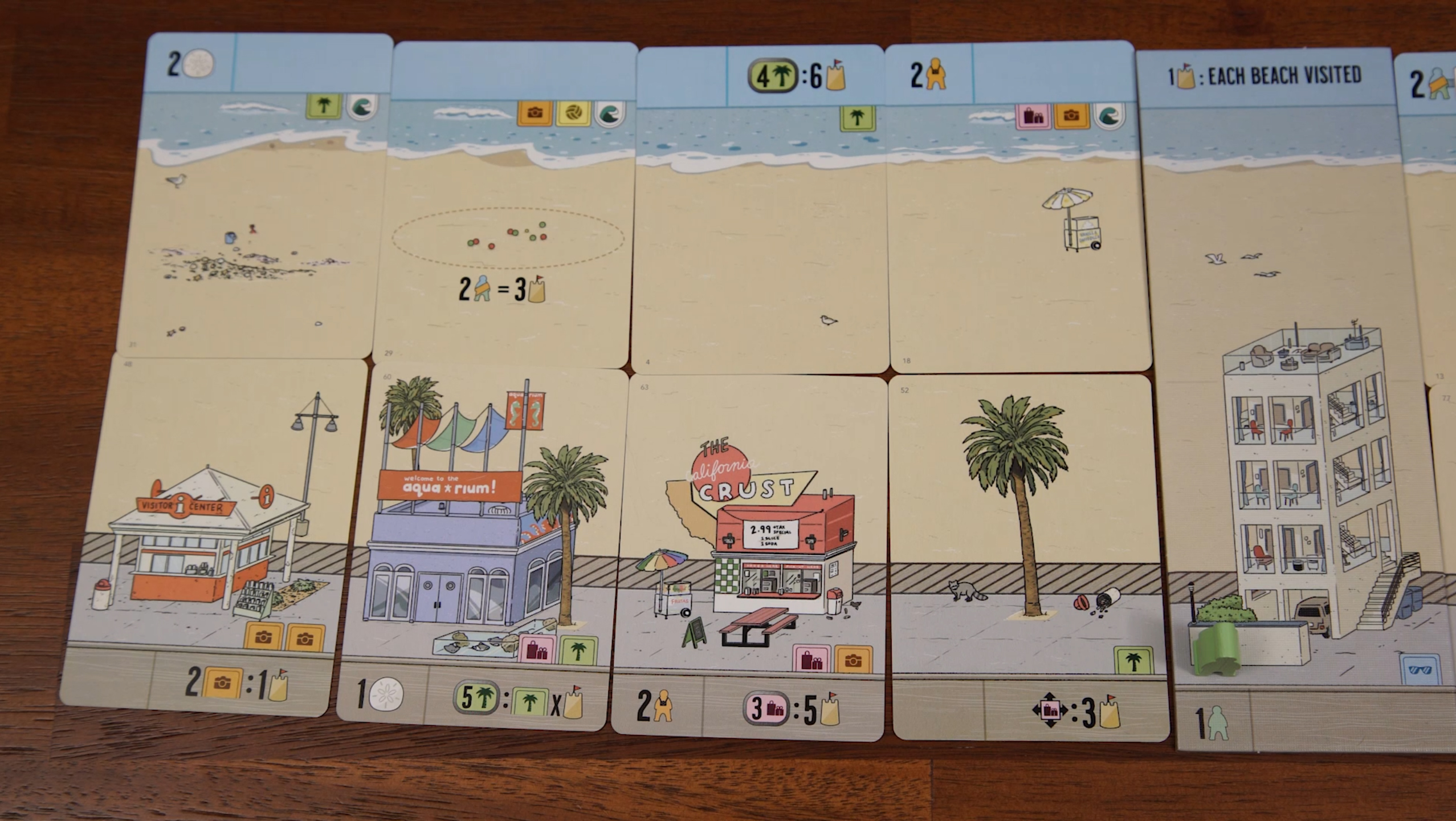 In most tableau-building games, cards have costs. In Santa Monica, cards are free. You don’t have to buy a card; it just goes straight from the common display into your beachfront. Even with the sand dollar actions, even if you can access some of those cards in the back row, really, you have limited options each turn in terms of which card(s) to take. 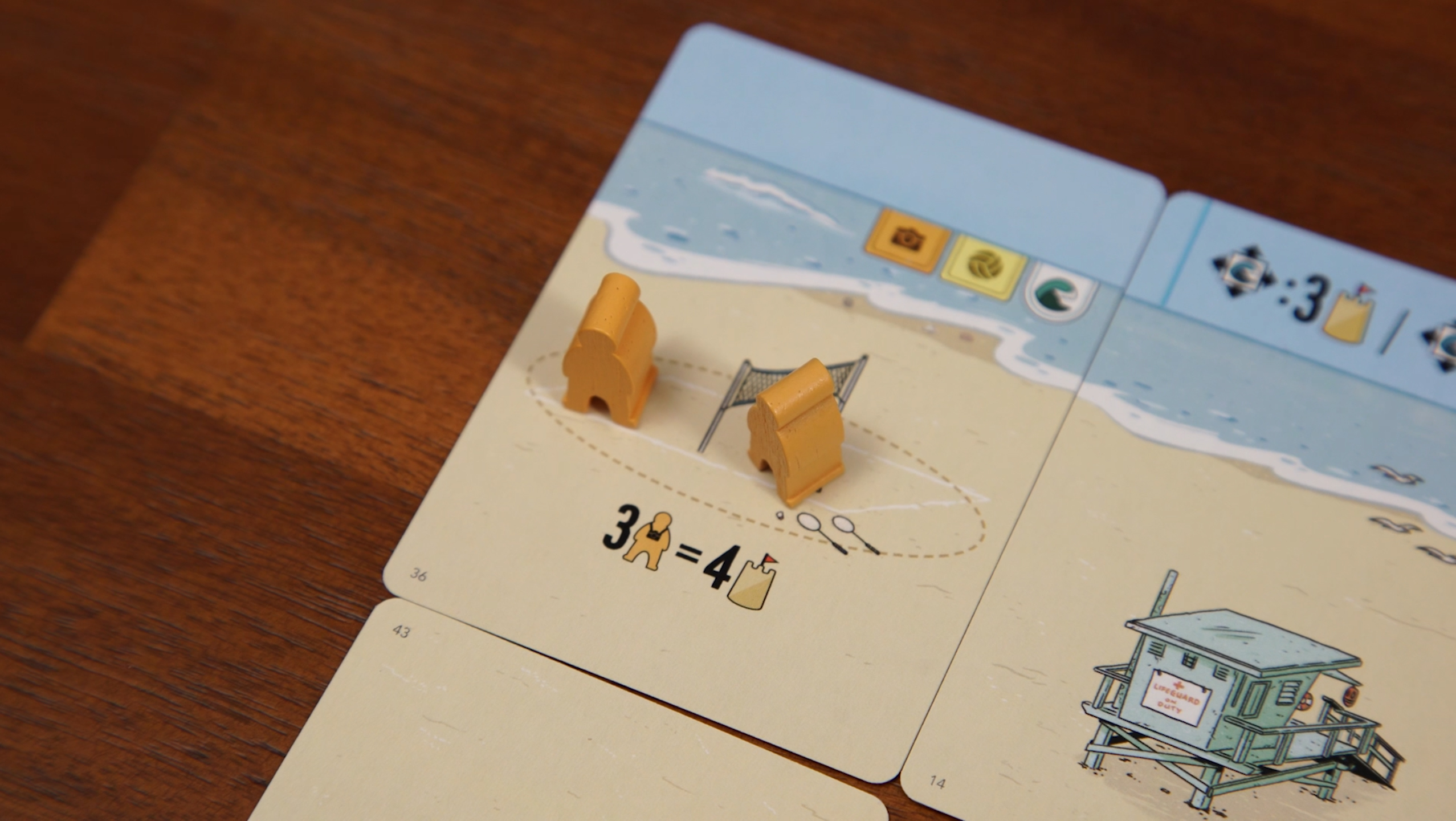 Besides, despite the fact that most of the indicators on these cards are good, sometimes these cards come with things you don’t want, like extra people. Tourists and locals can often help meet scoring opportunities, but if you take in too many of them or don’t have enough movement to get them where they need to be, their loitering presence can end up hurting you. I love this aspect of having these activity rings and needing to move people around in your town to the right spots. That pressing need to ensure everyone in your town is doing something is what makes the placement of your cards really matter, along with scoring opportunities such as chains and adjacencies.

It’s clear that a lot of time went into carefully crafting this beautiful deck of varied cards. In Santa Monica, every card really does have a purpose, even the ones that look relatively bare. Between placement bonuses, scoring opportunities and activity rings, each card you acquire is almost like a new piece to an ever-changing puzzle, and you need to find where that piece fits best in order to maximize its value. That puzzly aspect of trying to make everything work and complete all your objectives with limited movement and turns drives the game.

Between placement bonuses, scoring opportunities and activity rings, each card you acquire is almost like a new piece to an ever-changing puzzle, and you need to find where that piece fits best in order to maximize its value. 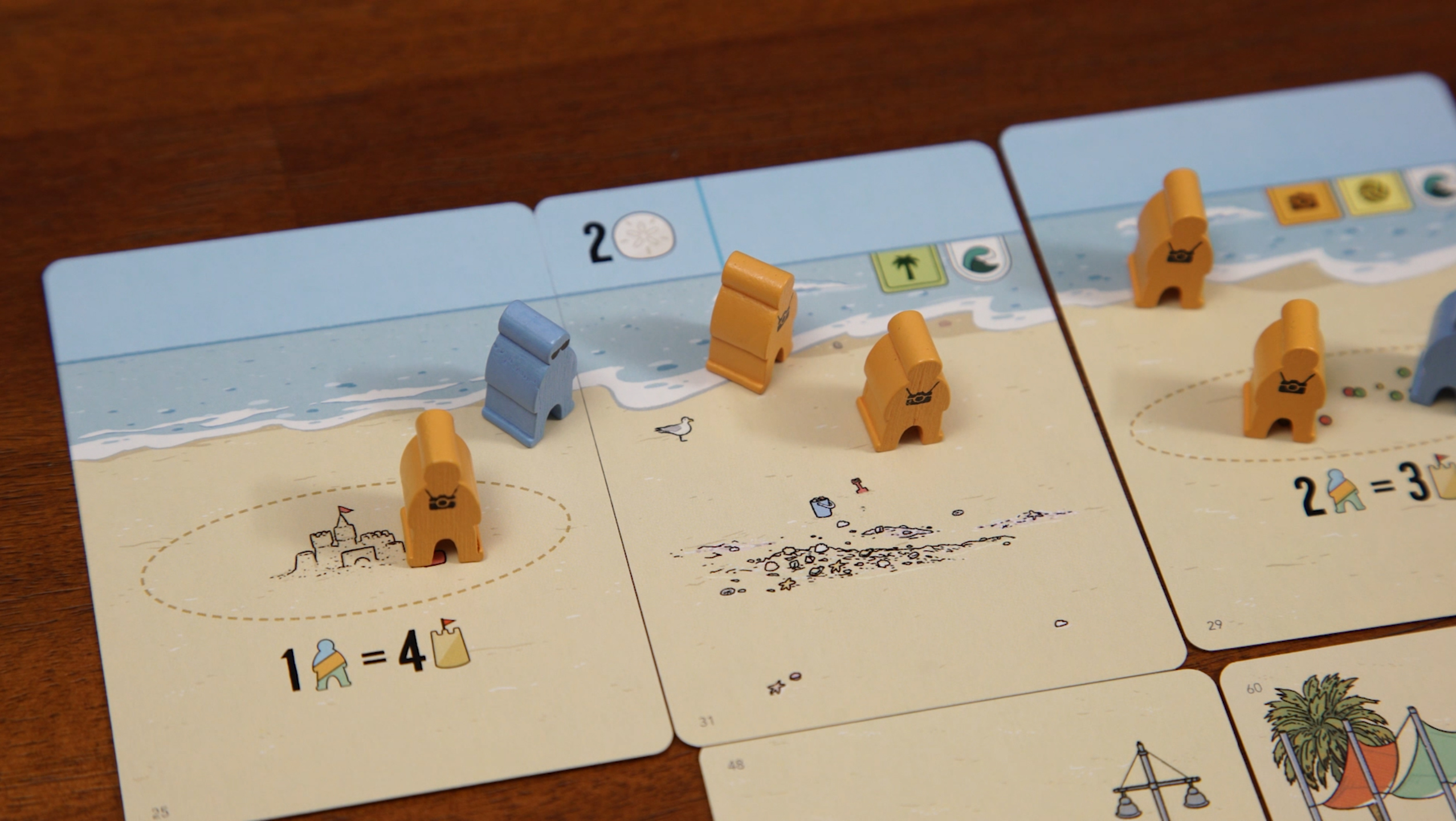 Right from the start, you have a different objective from the other players, determined by your starting feature tile. This helps set players on slightly different paths, giving Santa Monica some more variety while ensuring it won’t always be obvious what the most desirable card is in the display. Sand dollars inject some minor resource management into the game, as you try to figure out how many you’ll need to accomplish your goals, depending on the available sand dollar actions each game. Between those and the three scoring cards for waves, chains, and unplaced people, you’re dealing with a slightly modified set of circumstances each time you play. These familiar concepts permeate throughout and resurface each time you play, but they’re always tweaked to throw off that familiarity just enough. 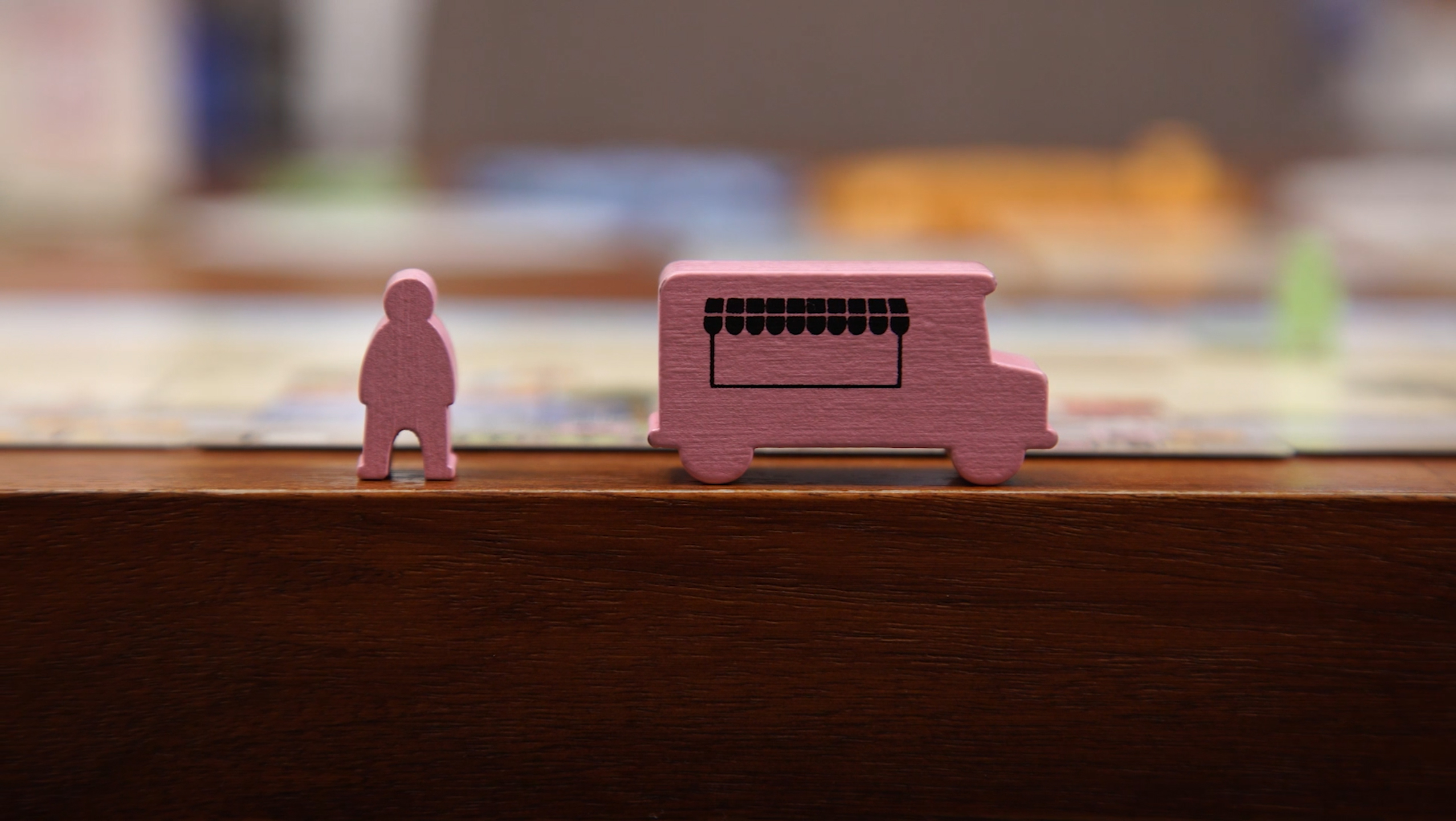 The final and arguably most interesting mechanic here is the Foodie and Food Truck tokens, which provide benefits for taking the cards above them in the display. As those cards are taken and the benefits are gained (either 1 sand dollar for the Food Truck or 1 movement action for the Foodie), the tokens move around along the display, causing everyone to think twice about which card to take, potentially setting up their opponent, or themselves, for an additional benefit. It works really well because without these tokens, you’d always just take whichever card was best for your tableau. With these tokens present, sometimes you need to reconsider whether a less effective card might be the better choice as a result of which token does or doesn’t move.

So, even when you know what your strategy should be – which feature tile you have, which scoring opportunities are in play, etc. – the best decision is rarely obvious due to the other factors at play.

I’ve really enjoyed playing Santa Monica because it strikes a great balance of luck and strategy in an accessible package that plays in under an hour at all player counts. Most importantly, watching your tableau come together over the course of the game is always satisfying whether you win or lose, and due to the friendly nature of the game, the moments of frustration are extremely rare.

I think the level of player interaction in Santa Monica is perfect. It’s difficult enough as it is to juggle all your scoring opportunities, find the perfect placement for your cards and ensure the people in your beachfront are all being effective. The public scoring objectives and common display with the Foodie and Food Truck tokens provides enough reason for everyone to keep track of their opponents and sometimes take cards from the display that they know someone else would want, but that’s about as far as the competition between players goes, and I think that’s ideal for this game. 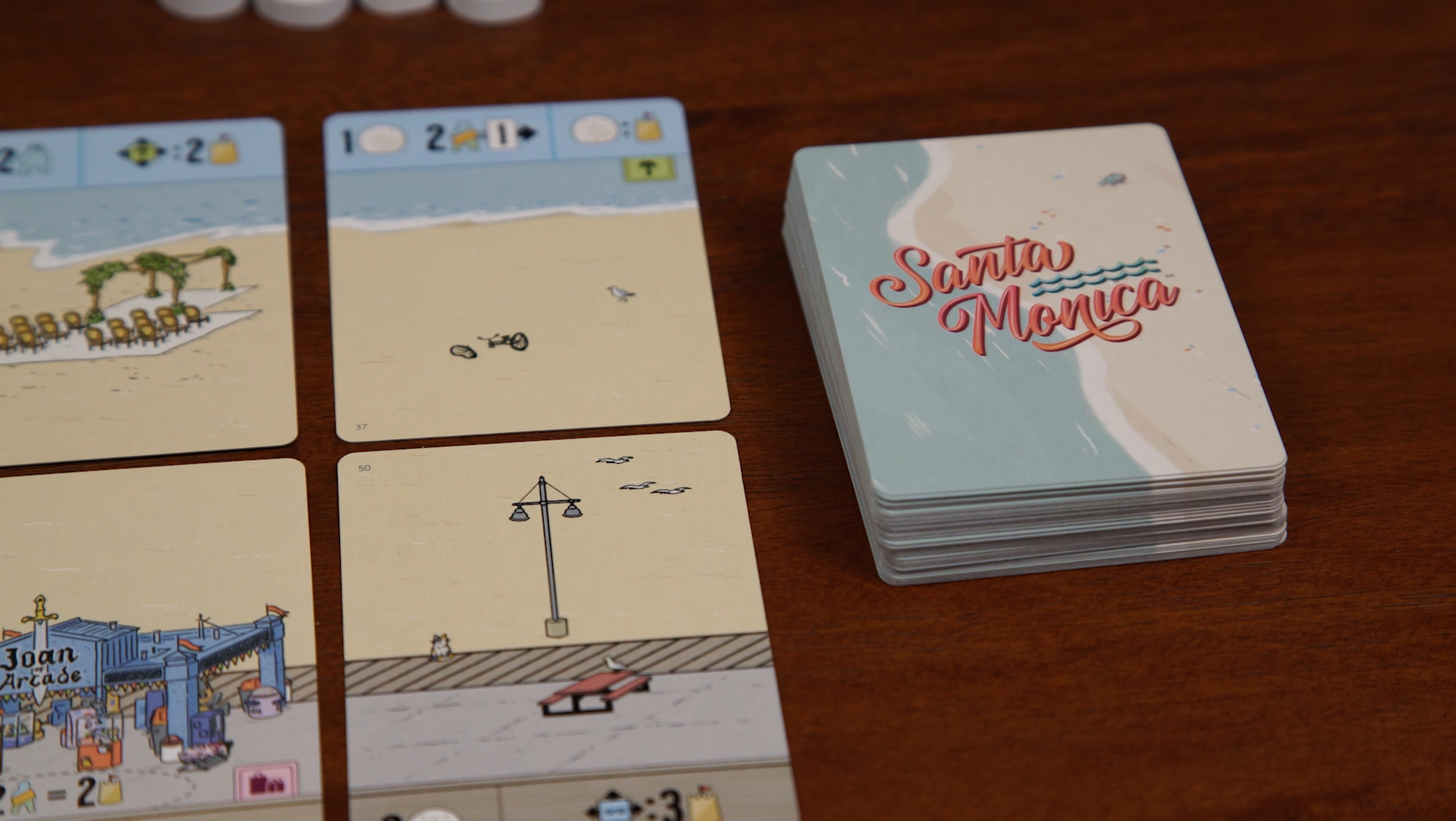 At times, you might get frustrated by not getting the cards you need. You might start building toward a chain of particular tags, and then you might not see enough of those tags come up to actually score those points. The more you know the deck, the more you can plan around what to expect. Besides, part of the challenge of Santa Monica is finding a way to make things work even when you might not want a particular card.

The main thing that makes Santa Monica fun, though, is seeing your tableau develop into a unique beachfront unlike any other. The game feels like the perfect length where your tableau looks nice and pretty full but you always wish you could grab just one or two more cards to really fill it out. It leaves you wanting more.

The main thing that makes Santa Monica fun, though, is seeing your tableau develop into a unique beachfront unlike any other.

Of course, since you can’t do anything when it’s not your turn, there will be some down time, but since you can only pick one of four cards on your turn, or take a sand dollar action, the turns tend to move quickly, keeping everyone at the table engaged.

Santa Monica rewards you for repeated plays as you get a better feel for how many movement actions you’ll have, which type of cards are in the deck, which feature tiles are easier or tougher to score, and so much more.

Each time you play, you have a different combination of feature tile, sand dollar actions, scoring tile, and display cards to puzzle out. The player who can best juggle all these will win and it’s great to see that puzzle change each time. 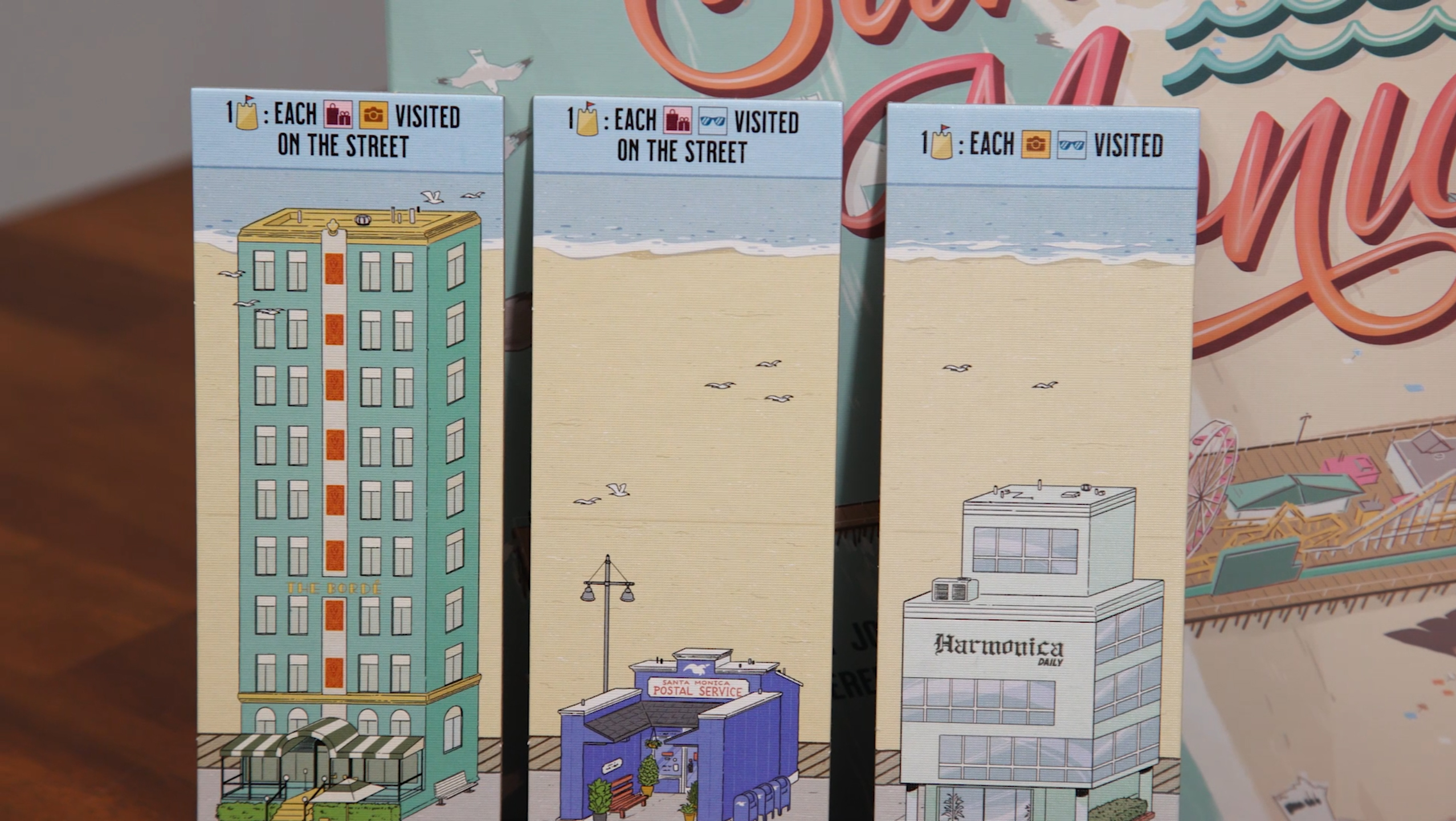 The game also presents a different challenge depending on player count, as with two players you can better plan which cards in the display you might take, whereas with four players the display might look entirely different between each of your turns. Beyond that, competing for the end-game scoring objectives becomes tougher with more players, as you try to outdo two or three people instead of just one.

If you already have plenty of tableau builders and this theme doesn’t appeal to you, there might not be enough here for you to warrant a purchase. But, if you’re even open to the idea of a new tableau builder, and you like the artwork and theme here, I really think you can’t go wrong with Santa Monica. 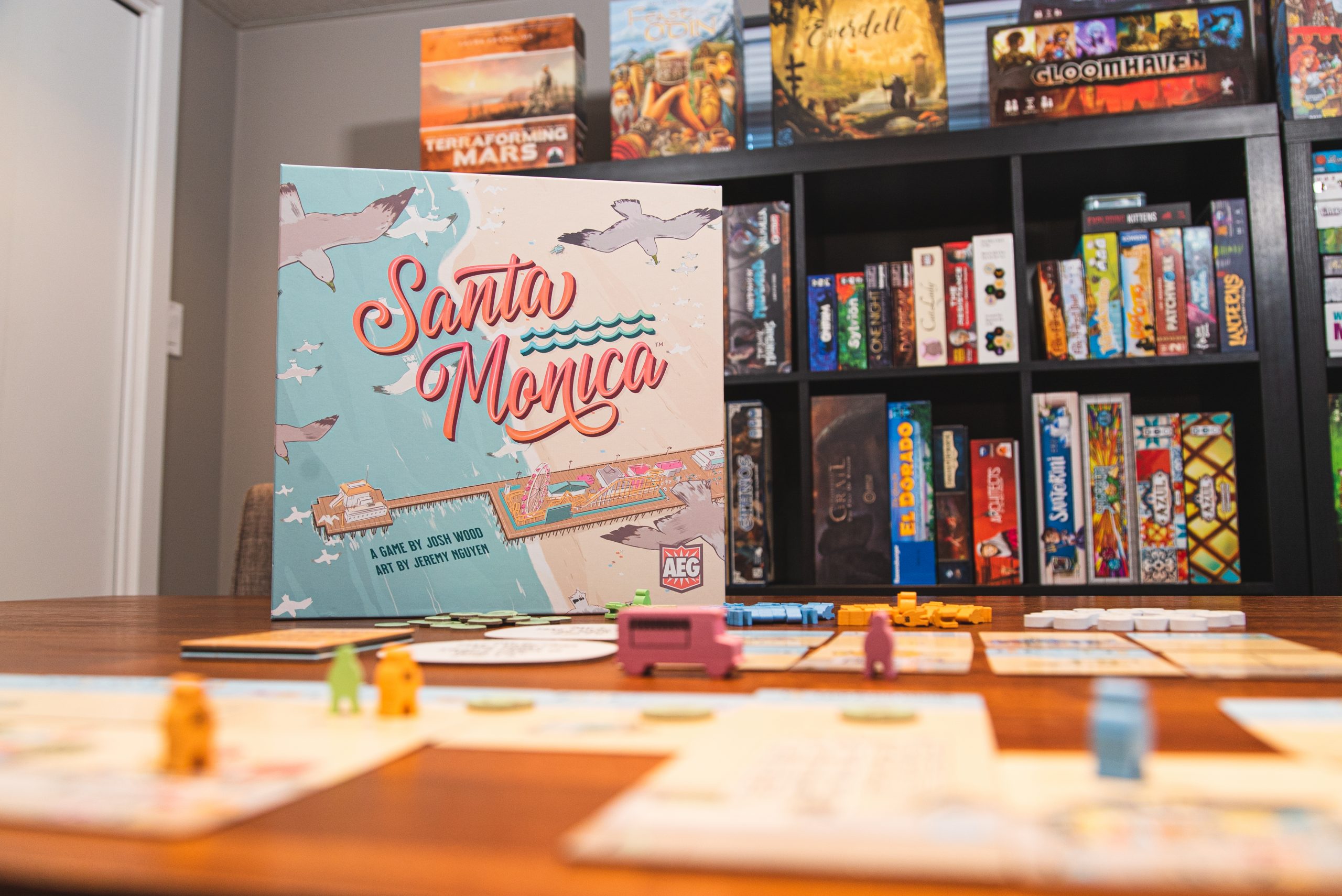 There’s more to Santa Monica than meets the eye. Beyond the surface of this laid-back beach vibe and welcoming artwork lies a sharp, difficult tableau builder with a few distinct qualities that set it apart. Win or lose, watching your beachfront develop is always a fun time, and you’re always left feeling like you could’ve done so much better, which will keep you coming back for more.

While this might not reach the absolute pinnacle of tableau building, it’s certainly one of the more interesting ones I’ve played, and an excellent choice for anyone looking for something different. Now if only we could figure out a way to get those darn tourists to stop loitering and actually do something.

Artwork and Components
9
Design
8.5
Fun Factor
8.5
Value
8
8.5
If you’re looking for a tableau-building game that’s quick and easy to play but difficult to master, Santa Monica certainly fits the bill. With gorgeous artwork and table presence, this will pull you into its beachy setting and won’t let go until you feel the combination of satisfaction and frustration of not being able to do everything you want. If you’re like me, that’s exactly what you’ll love about it.
Reader Rating: (0 Rates)
0