When I first heard of Gizmos, I couldn’t help but wonder if the energy dispenser was simply a gimmick to attract new players. Sure, it looked neat, but was it really necessary?

While it might not be necessary, it not only adds a level of table appeal and tactile interaction that bring the theme and mechanics to life, but also functions as a way to store and recycle the main resource in the game – energy. It’s subtle, and it took me a while to fully appreciate how much the dispenser contributes to the overall package. Just like Gizmos itself, the dispenser has a lot more going on than initially meets the eye.

Dispenser aside, the overall presentation in Gizmos has a clear, well-defined approach. The vibrant, cartoonish style permeates throughout, as the theme remains present during each action. Players take on the roles of inventors at the Great Science Fair, competing to see who can build the most complex, efficient machines made up of various gizmos. Whether you’re picking one of the four types of energy marbles (atomic, electric, battery, heat) from the cleverly implemented dispenser or setting off chain reactions from the engine you’ve built, Gizmos constantly makes you feel like some sort of mad scientist experimenting with the unknown. 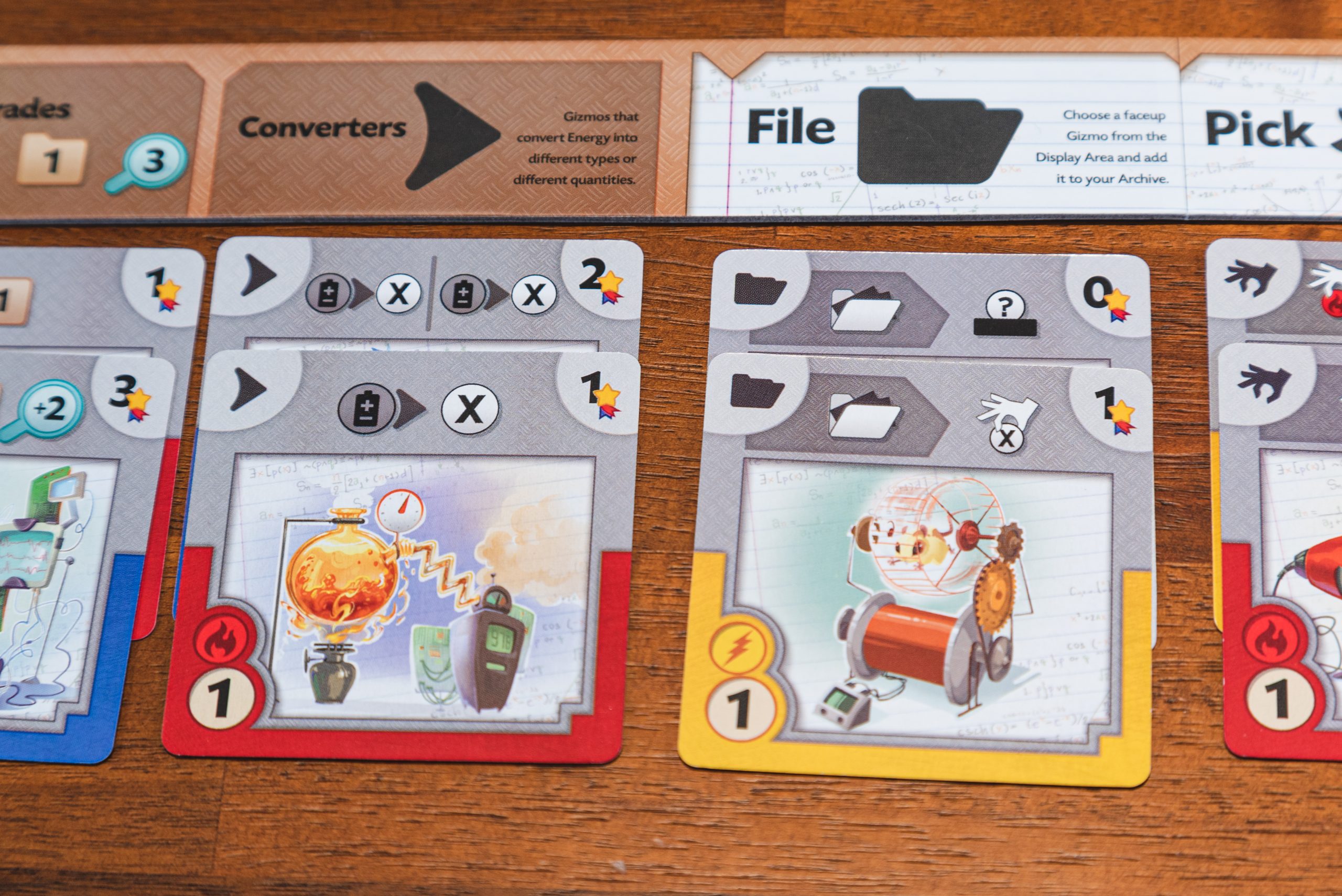 The gizmo cards, although bright and colourful, lack distinction. The illustrations are fun to look at, as you try to imagine what this device would be called or what it would do, but beyond that, I noticed I stopped observing them closely after the initial appeal wore off. It would have really helped to have names for these gizmos to set them apart more, making it easier to refer to them. For example, see the card pictured here. 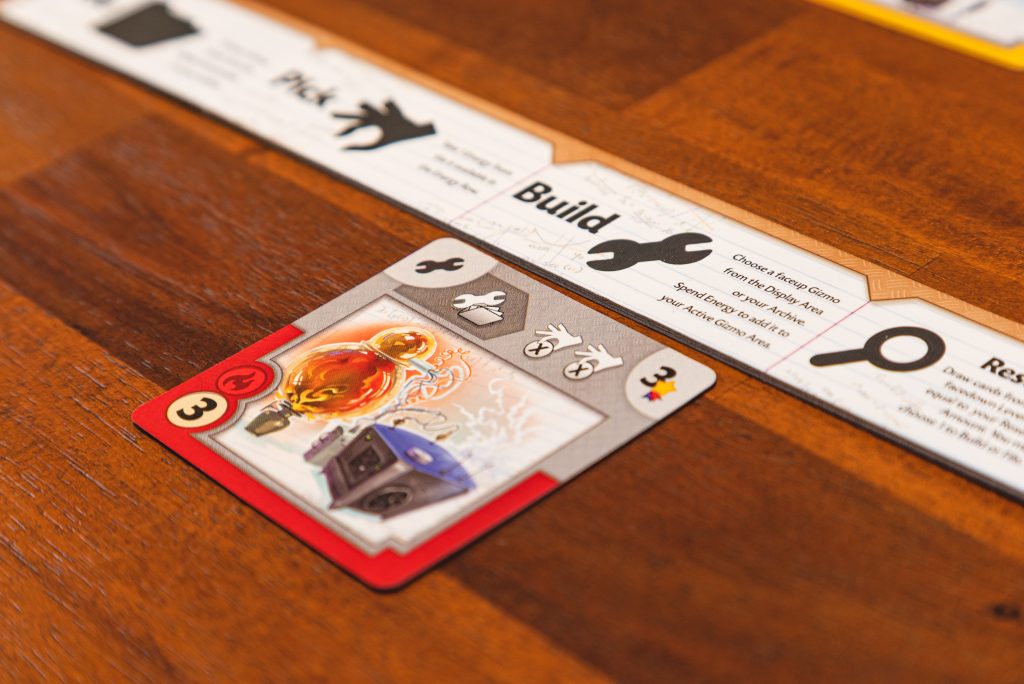 Rather than say “the gizmo that allows you to pick two energy marbles of your choice from the energy row every time you build a gizmo from your archive”, maybe this could have been called “The Thingamajig” or “The Whatchamacallit”, or whatnot. Then, players could easily identify duplicates in play and, over time, it would help to remember what that gizmo does just by seeing the name.

On the other hand, the iconography on the cards, which also translates to the player dashboards, is excellent, because it’s intuitive and easy to identify, which diminishes the learning curve that might dissuade a more casual gamer.

After a few plays, I was looking for a little more variety in the level 1 and 2 gizmo cards. I don’t doubt Phil Walker-Harding’s game design here, in terms of balance and what made most sense for the game. However, when you look through all the level 3 gizmos, you can’t help but wonder if there might have been a way to incorporate a little more variety into the cheaper gizmos as well. I suppose that’s part of the fun and reward of building your engine, though, as you strive for those one-of-a-kind, specialty level 3 gizmos.

Even though it has similarities to games like Splendor and the Century series, Gizmos almost feels like its own take on engine-building, thanks to the wild chain reactions. My favourite aspect is the sense of progression you gain as you collect gizmos and develop more opportunities for combos, trying to determine how you can maximize the efficiency of each turn. Some of the design choices I prefer less than other engine-builders, but the way Gizmos makes you feel as things ramp up and your turns sprawl into several actions at once is about as good as it gets. If you look at what you can do on your first turn compared to your last turn, it doesn’t even feel like the same game.

Some of the design choices I prefer less than other engine-builders, but the way Gizmos makes you feel as things ramp up and your turns sprawl into several actions at once is about as good as it gets. 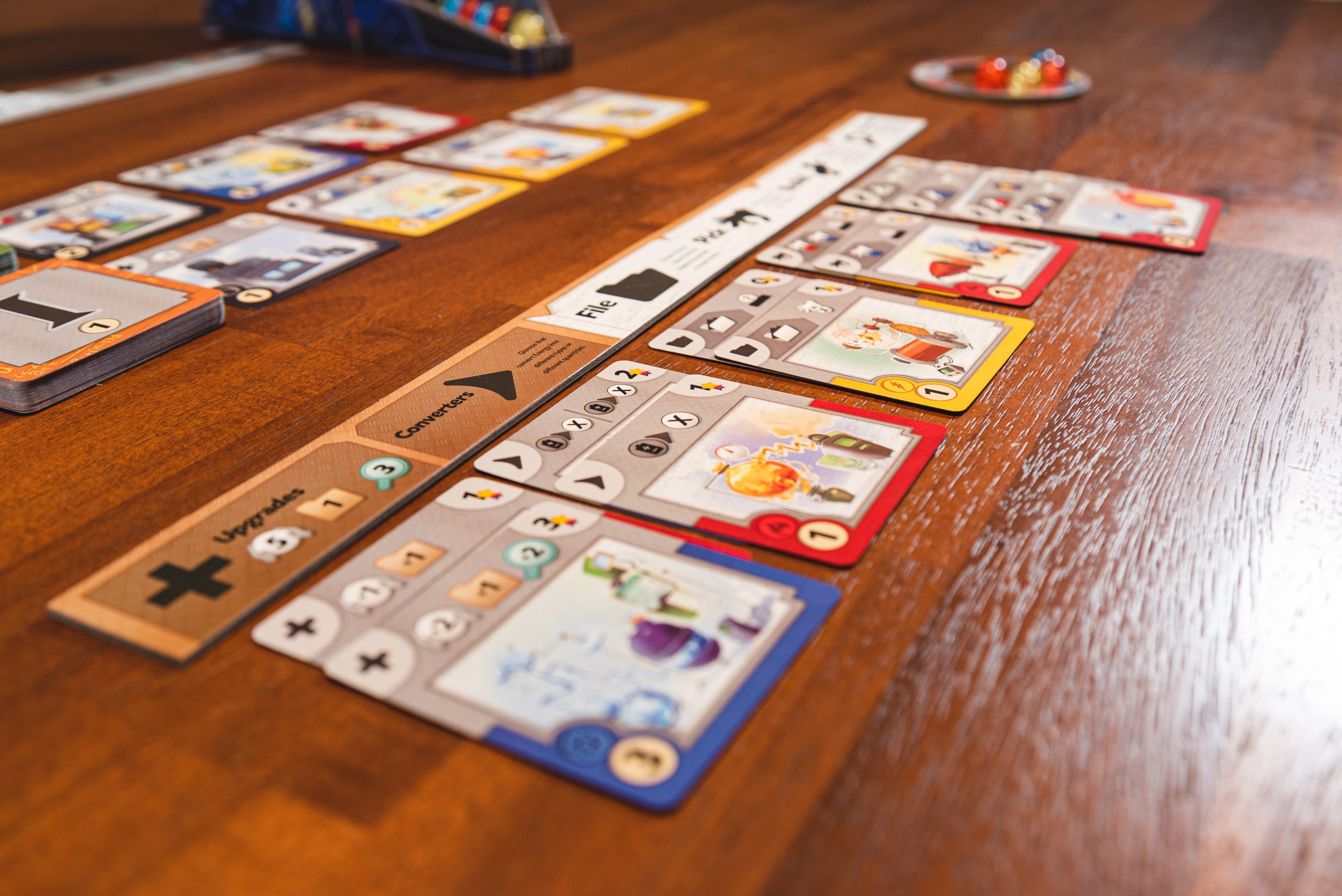 Based on the game ending when any player has built either their 16th gizmo or their fourth level 3 gizmo, you need to consider when to stop working on building your engine and when to actually shift into overdrive and start grabbing as many points as you can. Ideally, you should aim to do both, but it’s not always up to you. Gizmos has just enough elements of luck to even the playing field and make things more interesting, but not too much that it feels like your decisions are meaningless. 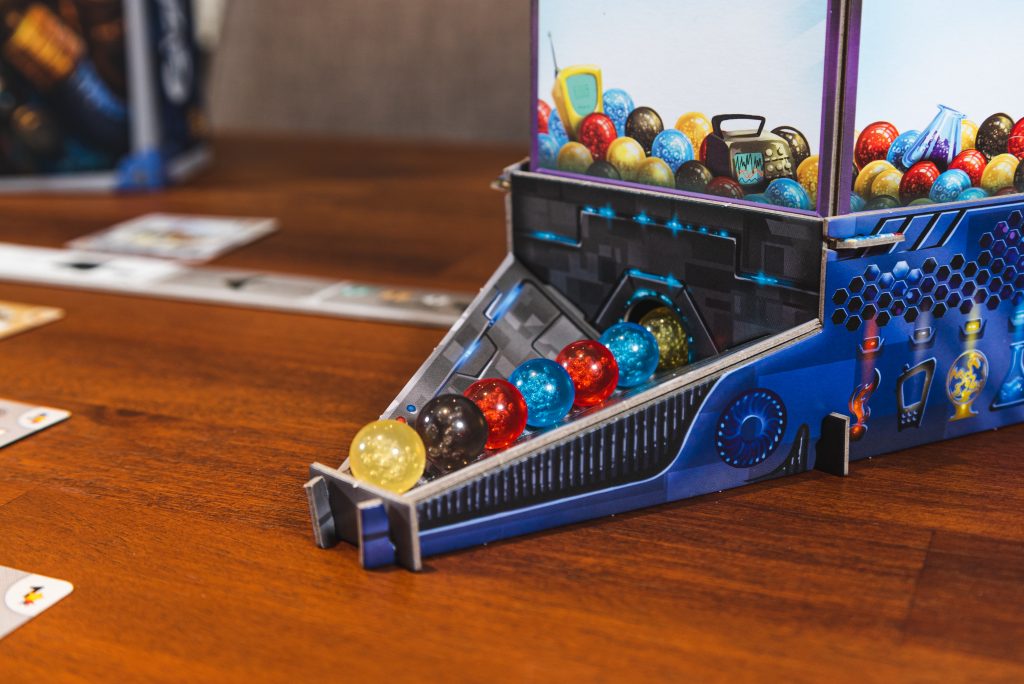 Sometimes, you need a specific type of energy, and it’s not available in the energy row. Counterpoint: if you have gizmos that allow you to draw randomly from the dispenser, you’re actually more likely to grab the colour you need since the energy row is filled with other colours. Sometimes, you have abilities that provide a discount or allow you to build gizmos of a specific colour, and yet, those gizmos might not be available on the display. Counterpoint: you can use the research action. If the gizmos you need aren’t in the display, maybe you can find one in one of the level decks. I love that Gizmos can make you feel unlucky, and yet, you can always take a step back and realize that bad luck could have been mitigated if you had played it differently.

Since each turn consists of four main choices (file, pick, build or research), the decision tree is often relatively easy to mentally navigate. If you know you don’t have enough energy to build anything, and your archive is already full, then you know not to research, so just decide which marble to grab from the energy row. Narrowing each turn to four initial choices that branch out into other options is incorporated so well here, and I really appreciate the simplicity that later develops into complexity as you collect more gizmos and the possibilities increase.

The lower the player count, the more you can form a long-term strategy. With three or four players, you need to be prepared to make tactical adjustments when fewer options are present that meet your strategic goals.

Even though you have less control with more players, it doesn’t make Gizmos any less fun. In fact, I prefer it with three or four players, even if it takes longer. With four players, the game still moves quickly and has very little downtime between turns. Besides, it can be just as entertaining to watch other players take their turns. Yes, players are competing inventors, but they’re not rivals looking to thwart each other’s plans by sabotaging their engines. The player interaction in Gizmos comes from the sharing of available energy, gizmos cards in the display area and deck, and also monitoring how many gizmos other players have in order to anticipate when the game might end. 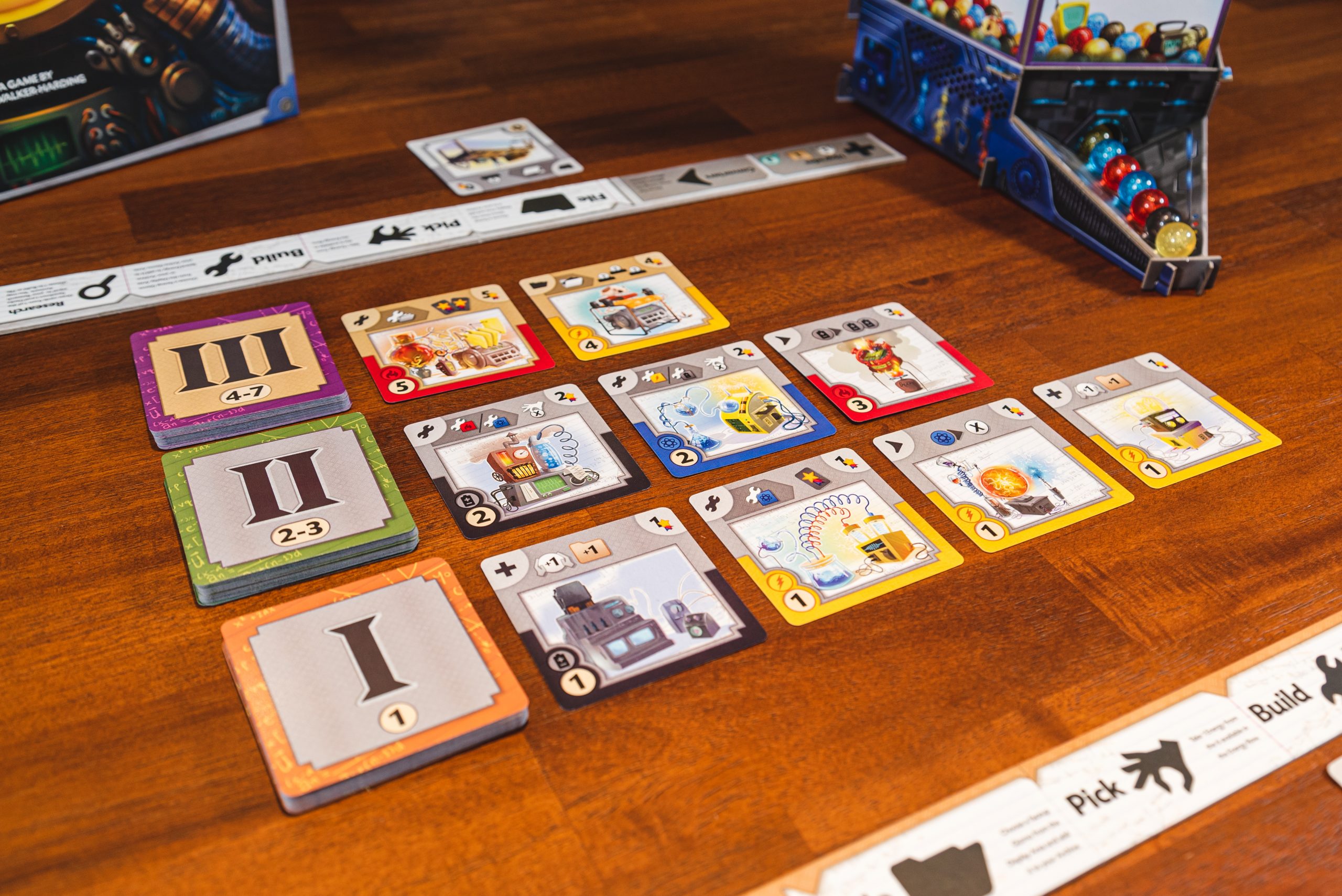 Two players who already know the rules can likely crush a game of Gizmos in less than half an hour. Even with four players, I don’t think I ever had a game take more than an hour. It’s fairly simple to explain the basic rules, and aside from that, the intricacies lie in forming a long-term strategy, and sometimes checking the reference guide to see what a particular gizmo’s ability means. The average turn takes longer as the game goes on, but that’s to be expected from most engine-building games, and I certainly don’t fault Gizmos for that.

Two players who already know the rules can likely crush a game of Gizmos in less than half an hour. Even with four players, I don’t think I ever had a game take more than an hour.

The replay value here isn’t astronomical, but with different gizmos in the display area at the start of each game and a deck of 36 level 3 gizmos from which 20 are removed at the start of each game, I still have yet to play two rounds that feel the same. Even after many plays, you still won’t know which ones are in the deck unless you perform the research action and start digging through to see what’s available. 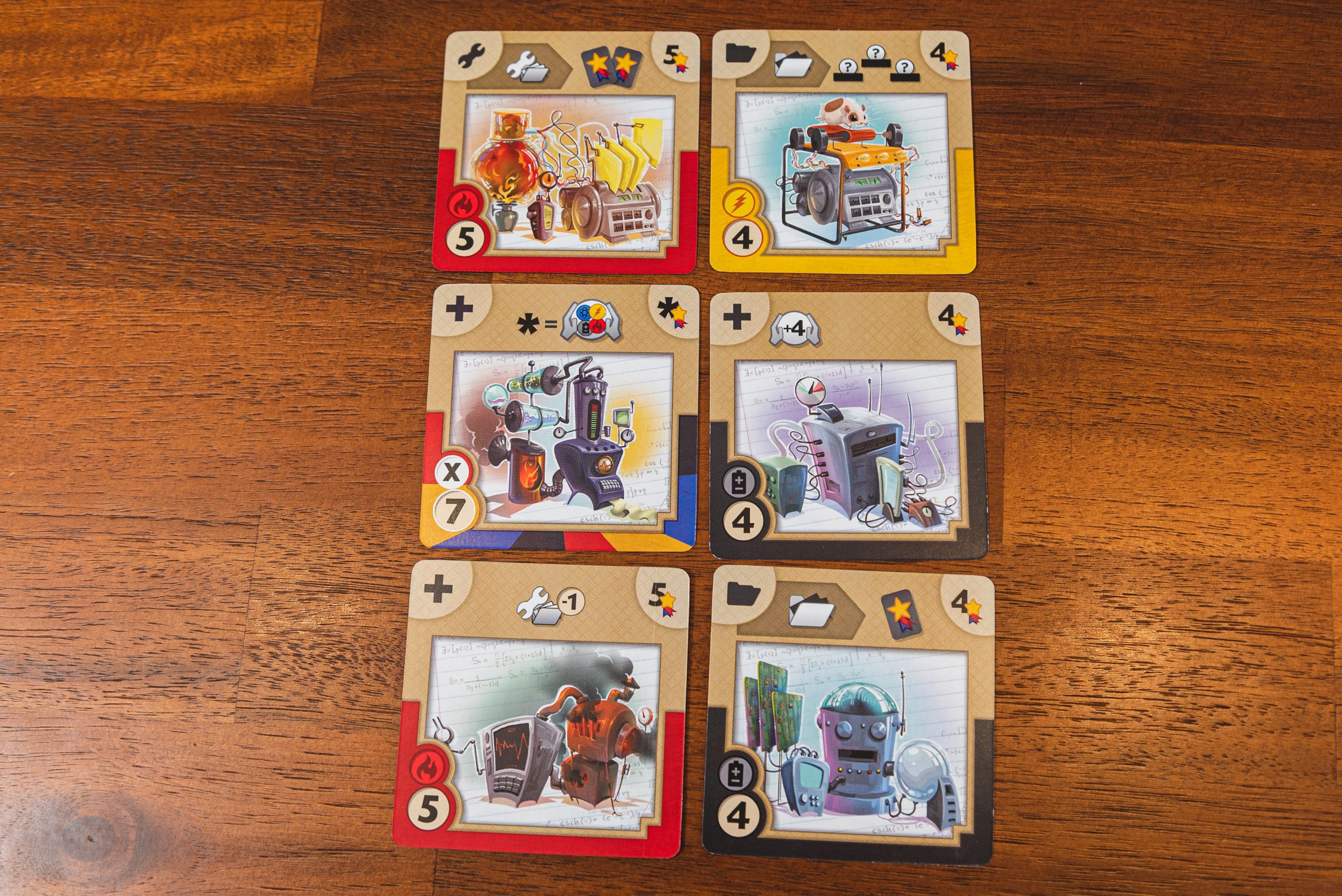 Gizmos is addictive because it usually ends right when you start feeling the surge of power from triggering multiple chain reactions, but I’ve never ended a game of Gizmos and felt like I made the perfect engine or figured out a guaranteed path to victory. In fact, the feeling of “let’s play again, I think I can make smarter choices and be more efficient from the get go” resonated with each player after every single round, which cannot be said for every game this accessible.

Repeated plays won’t necessarily reveal a ton of new layers of depth, but rather, the more you play, the more you’ll understand how to maximize your efficiency and improve your ability to make tactical decisions that push you forward the fastest.

Gizmos is by no means a perfect game, or even one that will go down as an absolute classic. It has some minor shortcomings with the gizmo cards and the ceiling of the game’s complexity, but engine-builders aren’t always this fun, thematic and rewarding. It’s not my favourite in the genre, as I tend to prefer heavier games like Race for the Galaxy, but if you’re looking for a quick one that you can teach anyone in a few minutes that will keep everyone engaged from start to finish while providing a truly satisfying level of progression, this is about as good of an option as you’ll find.

Artwork and Components
8
Design
8
Fun Factor
8.5
Value
8
8.1
What Gizmos lacks in complexity and distinguishing detail on cards, it makes up for with elegant design that makes it approachable for almost any age and level of board game experience. It might appear daunting to new players, but the iconography quickly becomes second nature, and before you know it, the turns are flying by and everyone’s having a great time watching these wacky inventions set off wild chain reactions. Gizmos borders on being a gateway engine-builder while offering room for deeply strategic play for more advanced, experienced players.
Reader Rating: (0 Rates)
0