The legendary German designer has somehow managed to create another game with many similar mechanics that feels satisfying in its own unique way. Although Spring Meadow seems more straightforward than Cottage Garden and Indian Summer in terms of rules, there’s a deceptive amount of strategy here, and it truly rewards players for their long-term planning.

Here you get a similar package as the other two games in the trilogy, but less colourful. It makes sense; the theme involves hiking in the mountains as winter ends, but it’s worth noting that Spring Meadow looks less vibrant and exciting than its trilogy counterparts, especially compared to Indian Summer. It’s a more subtle approach that fits the game, and season, well. 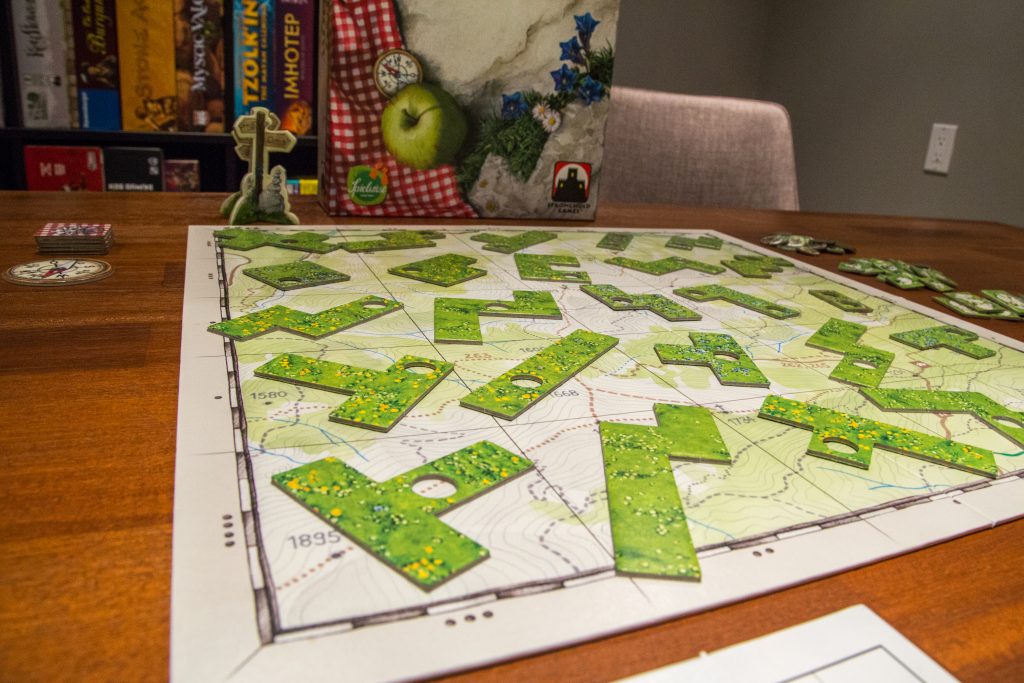 The edelweiss pins, sign post, compass and other components add a really nice touch to the presentation, but otherwise, the artwork remains relatively simple. It suits the game, and doesn’t need to stand out to draw me in. Spring Meadow shines brighter in other aspects, and that’s fine.

If you’re the type of gamer who looks for a strong thematic presence, this one might not be for you. More than most Rosenberg games, the theme feels more like a backdrop. The idea of hiking undoubtedly feels disconnected from placing polyomino tiles, but this isn’t a bad thing. It didn’t affect my enjoyment of the game, but the lack of thematic influence might be an issue for some gamers.

With each new puzzle game Rosenberg makes, my expectations increase. For such a prolific game designer to make multiple games with similar mechanics can be a gamble. Sure, any Rosenberg fan who tries one is likely to enjoy at least one of the others, but there’s always the risk of letting people down and coming up short with something that feels too familiar. With the number of new board game releases each year, most gamers need to be selective in what they buy, or even what they have time to play. Fortunately, Spring Meadow does more than enough to differentiate itself and provide a new set of goals to work toward.

Building from the bottom up might remind you of Tetris. Scoring for completed rows and the way scoring itself is triggered keeps it interesting throughout the entire game. The same can be said for the marmots, which work so well as a clever way to offer extra points as well as a buffer to be able to build over burrows. The fact that your burrows get covered if you win a scoring round can really make it tough to score that second pin. 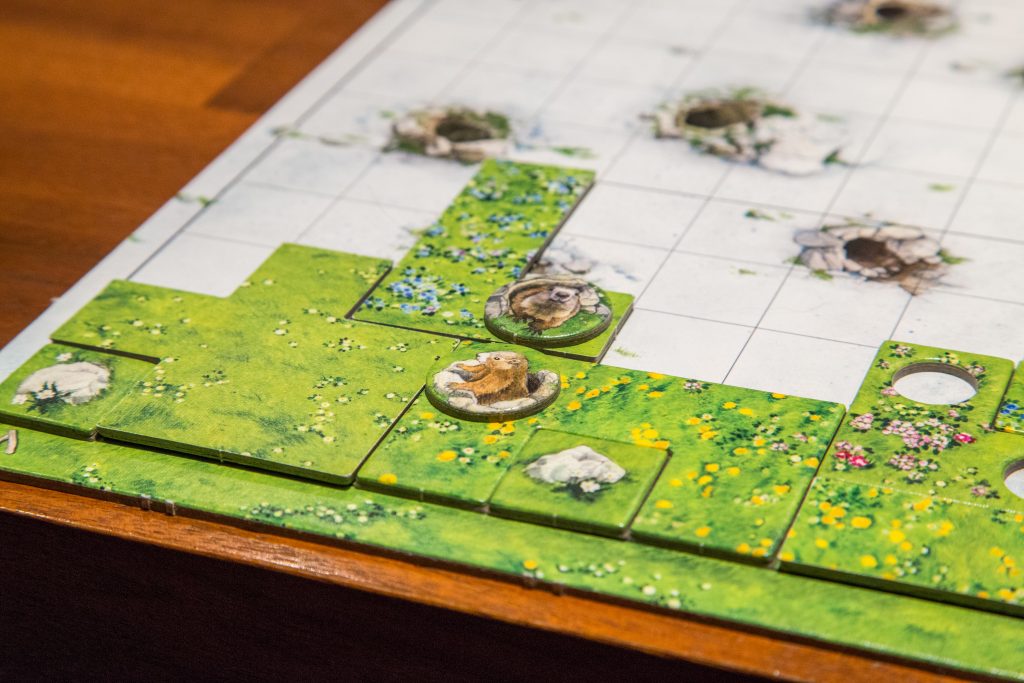 In my experience, when someone wins in Spring Meadow they usually have way more rock tiles than their opponent(s). This balance between wanting to complete your rows while maintaining a chain of holes to keep getting big rock pieces is one of the best things about this game. Even though the holes in the polyominoes isn’t an entirely new idea, the way it has been implemented here feels like a fresh, satisfying puzzle to solve each time you play.

The solo version is also worth a look. If you know Rosenberg, you know he likes to include a solo variant in most of his games. Other than a few rounds of Glass Road and Agricola, I had never played any of his solo variants before Spring Meadow, but I have to say I was impressed. It provides a quick, challenging experience that truly demands your focus and planning in order to reach the target score of 150 points, which took me more than 10 attempts. For an even greater challenge, try the Campaign mode and clear 600 over 4 games. I failed in all 3 of my attempts, but I had fun with it and I know I’ll be back for another attempt one day.

In my experience, when someone wins in Spring Meadow they usually have way more rock tiles than their opponent(s).

Spring Meadow has an addictive feeling to it, thanks to its short play time and quick turns. Even with four players, it rarely takes more than an hour. Since you can only do one thing on your turn (take a single tile from the appropriate row/column), along with a potential short bonus (adding a rock), even in a 4-player game you never really feel like you’re waiting long for your turn. The margin for victory can often be so close, making you want to play again immediately.

It’s a relaxing but thoughtful game to play. The turns move quickly (quicker than Cottage Garden and Spring Meadow) and I feel this is the easiest in the trilogy to teach almost anyone. 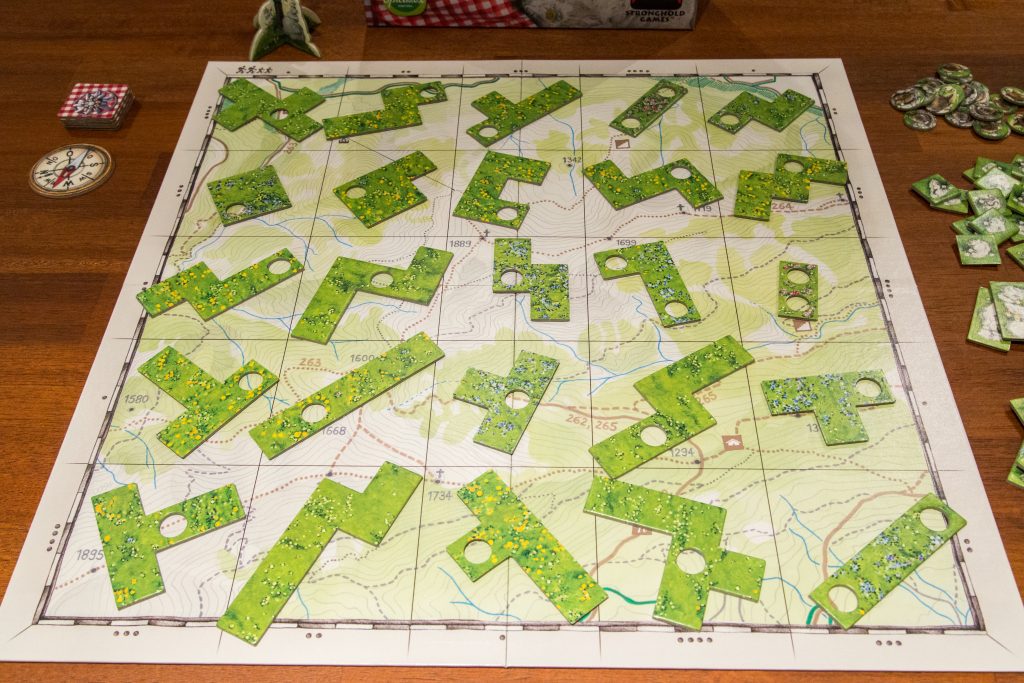 Even the most successful turn in Spring Meadow could only consist of placing one tile from a row along with a bonus rock. Compare this, for example, to Indian Summer, where a single turn can involve placing numerous tiles, trading resources, placing more tiles, trading more resources, and so on, while a player contemplates whether or not to take another action. In Spring Meadow, even when it’s not your turn, you can plan ahead and see which pieces will be available on your next turn. By the time you’ve looked at that, it’s probably your turn again.

Player interaction is minimal, yet always present, as players need to have an idea of who’s ahead in points when a potential scoring round approaches. If you look far enough ahead, you can even take a piece to deny someone else. Nothing about Spring Meadow feels inherently mean or targeted, but sometimes the best move requires taking what someone else clearly wanted.

The margin for victory can often be so close, making you want to play again immediately. 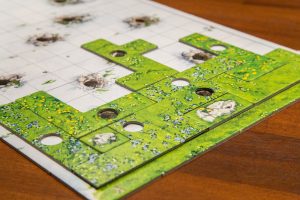 Even if I never played Spring Meadow again, I would confidently say I already got my money’s worth, and I haven’t owned the game for long. After at least 15 plays, it still hasn’t lost its appeal to me, and I don’t think I’ll ever turn down a game. I’ve played it with quite a range of people in terms of gaming experience, and I’ve found that even my friends who tend to enjoy heavy, complex strategy games enjoy playing it more than I expected they would.

Due to its accessibility, great replay value, and the fact that it’s fun at all player counts, this is definitely a game worth owning, especially if you don’t yet have any polyomino style games. It works as a gateway game for newer gamers, a casual game over conversation, or even a deep challenge for those looking for something more competitive. If it were any simpler, it might not be worth the price, but even after almost 20 games, I’m still surprised by the level of strategy necessary to defeat a good opponent.

Dating back to Bohnanza, Uwe Rosenberg has always had a gift for packing a remarkable amount of strategy and thought into a relatively simple set of rules. Spring Meadow is easy to learn, but that signature Rosenberg elegance makes it deceptively difficult to master. It rewards you for careful, astute planning and will keep you coming back for round after round.

Artwork and Components
7.5
Design
8.5
Fun Factor
8
Value
9
8.3
Even though Spring Meadow's artwork doesn't quite live up to Cottage Garden or Indian Summer, it makes up for that in every other aspect. The rules might be simple, but the level of strategy is another story. Poor choices can punish you as much as your wisest choices help you. Thanks to the short play time, you'll never fall too far behind, and by the time the game ends, you'll probably want to play again. Excellent at all player counts.
Reader Rating: (0 Rates)
0