The Fox in the Forest Duet – Review

Before you dismiss this little game based on the box cover, give it a fair chance.

I admit I wasn’t particularly excited about The Fox in the Forest Duet at first, but I’m always happy to be proven wrong when the result is as surprisingly rewarding as this. If you remember the

classic card game, Hearts, or you’ve played the original The Fox in the Forest, then you’re familiar with the concept of a trick-taking game. But have you ever played a strictly 2-player cooperative trick-taking game? Not only does The Fox in the Forest Duet differ from the aforementioned games, but it also feels unlike any game I’ve played, and for that reason alone, it deserves your attention.

Similar to its predecessor, The Fox in the Forest Duet consists of little more than some cards, although this cooperative edition also comes with some other small components, including a player board, otherwise known as the forest board, which creates a thematic location for the two players to navigate through. Gem tokens, forest tokens, and a team tracker complete the package. Cards aside, the other components are nothing to write home about. They serve their purpose, but you won’t be cracking this box open to show your friends the components. 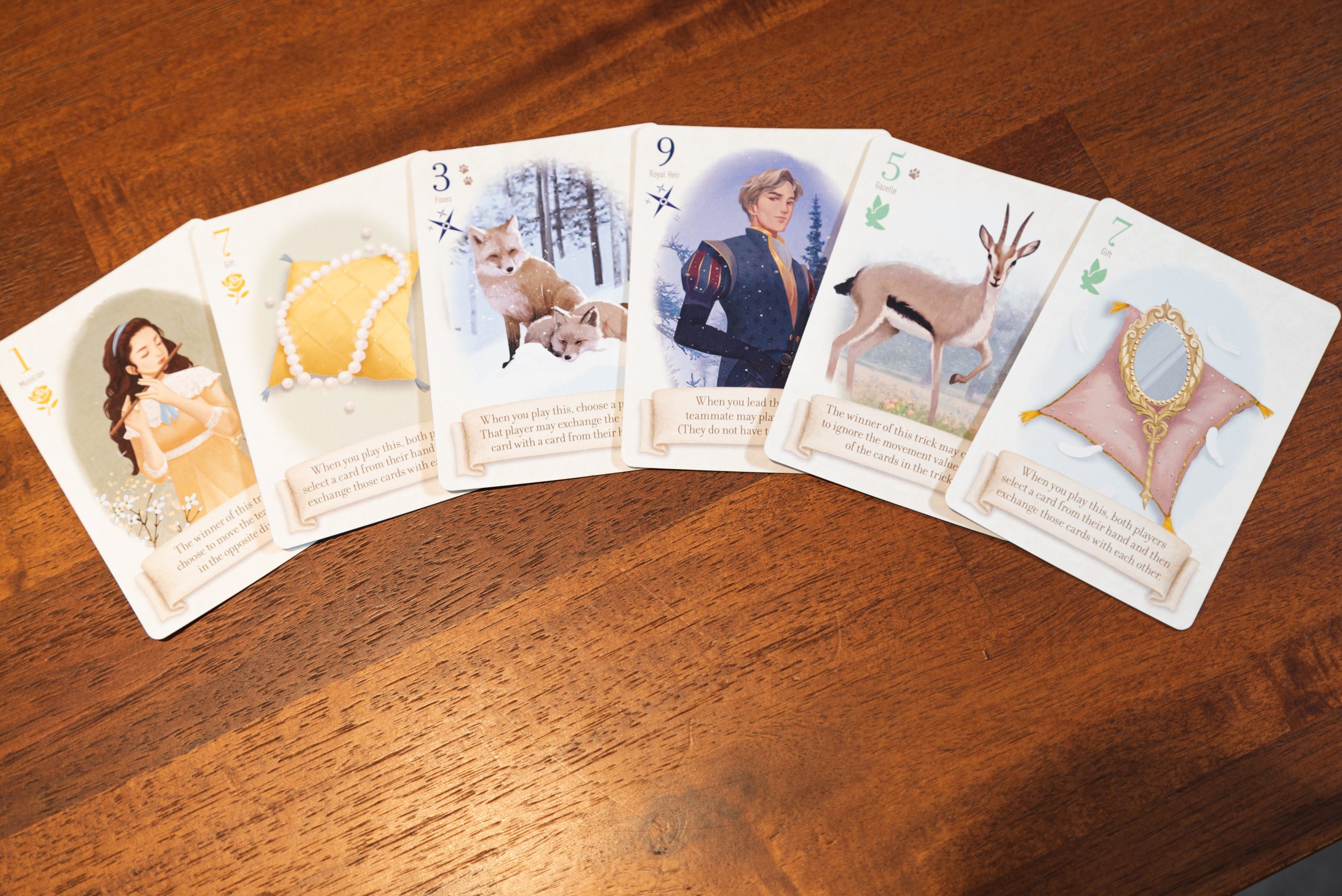 The cards, on the other hand, should grab your attention. While the even-numbered cards feature no more than a colour and suit (yellow rose, green dove and blue star) along with paw symbols representing player movement on the forest board, the odd-numbered cards make this game pop. The beautiful artwork varies on each card, even across the three suits, so The Fox in the Forest Duet amounts to much more than just a deck of cards with some simple rules, as the odd-numbered cards also all have names.

Speaking of which, this is where the theme comes into play. The rulebook includes a story about a musician who gets lost in the forest and the two players venture in to find the musician, collecting gems under leaves and mushrooms along the way. Similar to the original The Fox in the Forest, the theme doesn’t drive the game, but it certainly makes the experience more immersive and complete.

Sometimes you’ll find a game that takes a previous concept and doesn’t do enough to make it different and warrant your purchase, or even warrant your time to play. I can’t say that applies here.

First and foremost, obviously this one is cooperative rather than competitive, but the 2-player limit still applies. Where this truly shines, though, is the lack of communication, which is pretty rare for a cooperative game. You might be wondering: how can I work together with my teammate if we can’t talk? Well, you simply let your cards do the talking. You can play a card to lead your teammate, practically suggesting they play a specific card or type of card in order to win or lose the trick, but you also need to understand how to read your teammate when they lead and you must follow. 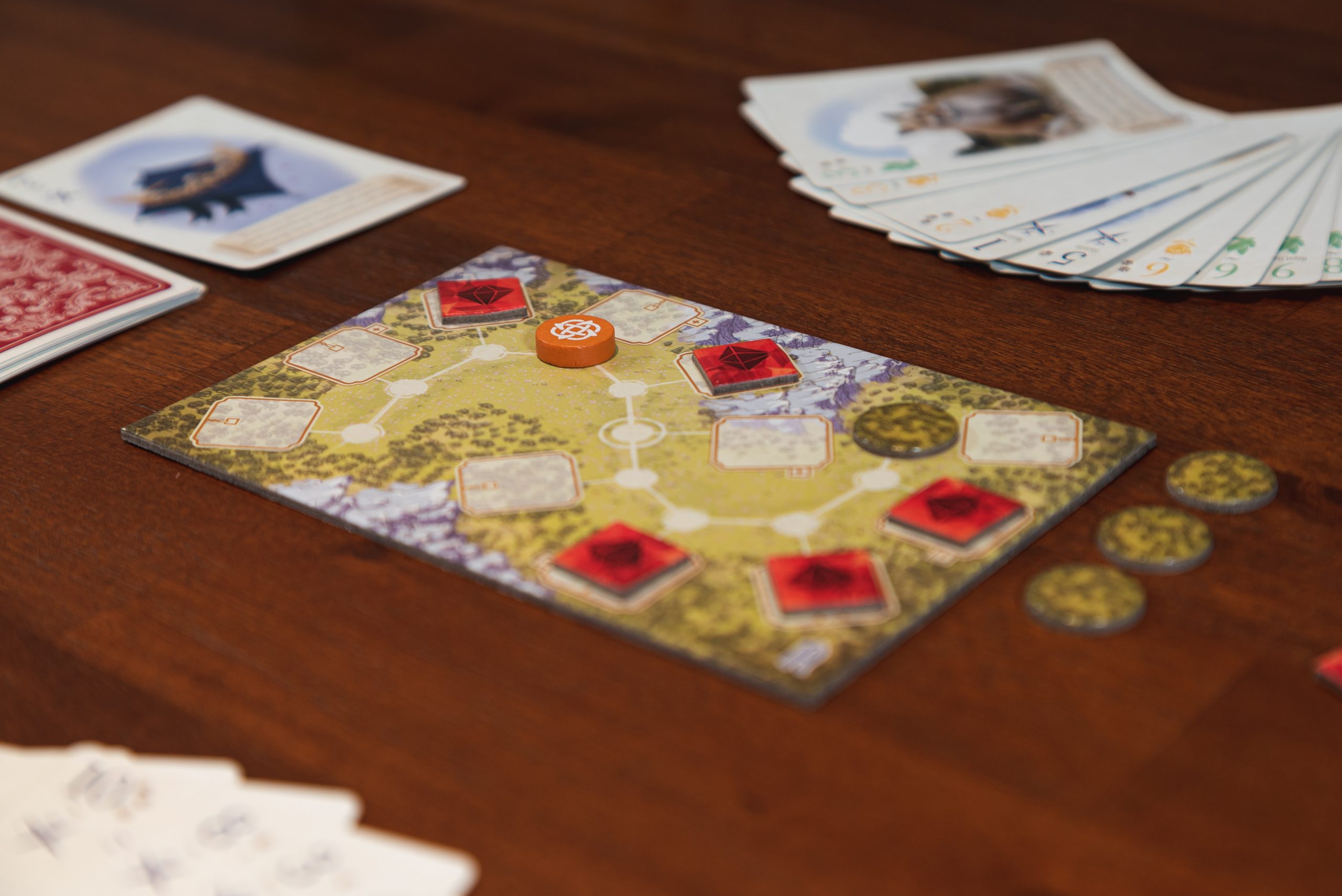 Maximizing the effectiveness of your cards for their abilities and movement is crucial to succeeding in The Fox in the Forest Duet. If both players simply look at the numbers on the cards, and even the suits and movement, you’ll never achieve your full potential as a team without capitalizing on those special abilities. For example, the Musician allows the player who won the trick to push the team tracker in the opposite direction. The Gift allows players to swap cards, and, if the lead player played the Gift, their teammate can even follow with that same card. This only scratches the surface of the depth available here. 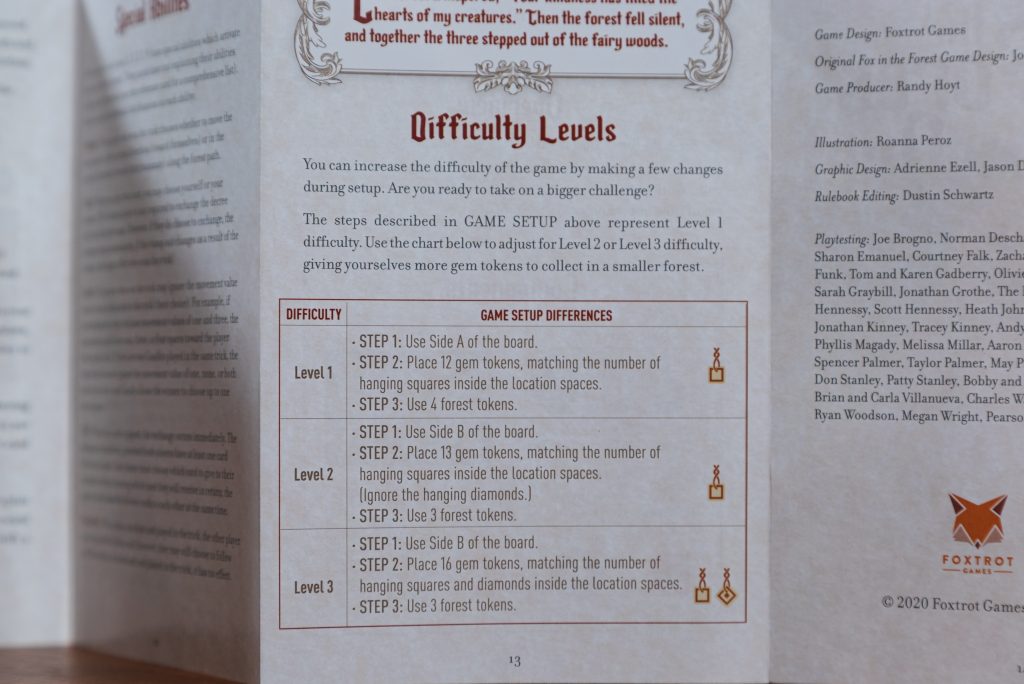 I also appreciated the lack of room, if any, for quarterbacking. Unlike most cooperative games, where one player, often the most experienced in the group, can steamroll other players’ ideas in order to point out the optimal move for each player on their turn, The Fox in the Forest Duet eliminates the possibility of making anyone feel like they’re just a passenger along for the ride. Nobody likes to live and die by the choices of one player. Thanks to the strict rules against communication, neither player can truly advise the other with anything other than playing a card. It’s a brilliant achievement that merits recognition.

Maximizing the effectiveness of your cards for their abilities and movement is crucial to succeeding in The Fox in the Forest Duet.

The options for difficulty levels (1-3) along with the point scoring system allow the players to adjust the level of challenge and also measure their rate of success. You can compare your old scores when playing with the same partner, but you can also compare your high scores with others. It also presents extra incentive to not waste turns, play more cards than necessary, or let the game drag on too long. The more efficient you are, the more points you will score.

The only reason I don’t rate the design score higher is because this is an alternate take on a previous version.

While some people might not enjoy the emotional disparity produced by the highs and lows of The Fox in the Forest Duet, I absolutely love that aspect. The extremes are pretty far apart, as one minute you can feel like you just sent your partner a telepathic message by leading with a certain card, which they might capitalize on perfectly, and the very next turn, it can all come crashing down as you stray past the final spot on the forest board. The rollercoaster-like swings from gratifying synchronicity to the devastation of crushing defeat might not fit your definition of fun, but I love it. 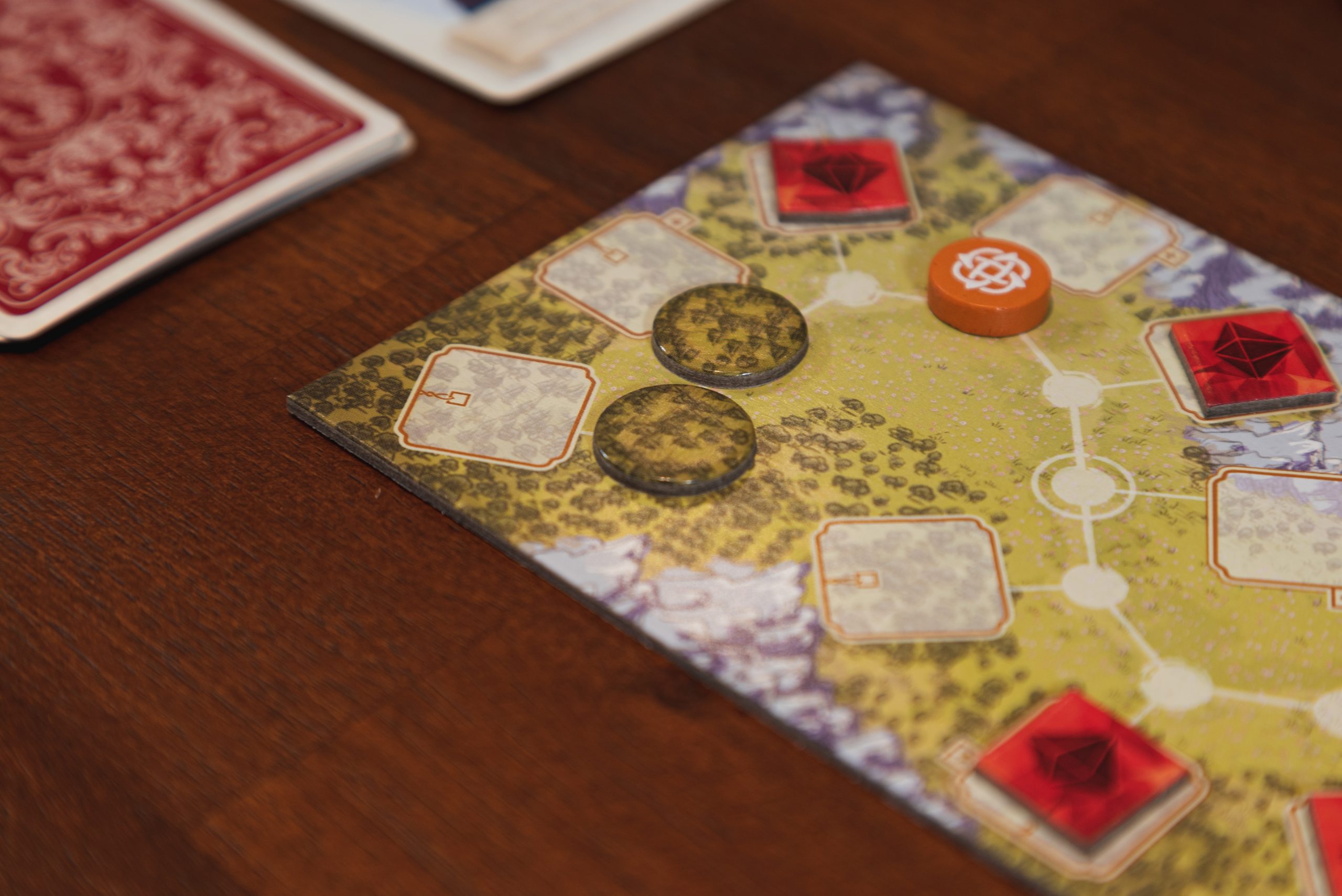 The rollercoaster-like swings from gratifying synchronicity to the devastation of crushing defeat might not fit your definition of fun, but I love it.

Even in defeat, you’ll often have a smile on your face as you think back to where you two went wrong or what you could have done better. You never really feel like the game or round was impossible, or that it was purely bad luck. There’s always room to revise your strategy and go into the next round or game with a more tactical approach.

The tension that builds by not knowing which cards your teammate has, what they might play, or whether they want to win or lose the trick, keeps the game exciting each and every turn. Plus, thanks to the scoring mechanic, even if you win, you have incentive to go back and try to beat your high score.

As far as games go, you won’t find many better deals than this. Brand new, you can get this for 10-12 bucks. Even if I never play it again, which I certainly will, I would already have my money’s worth and more. If you like trick-taking games, cooperative games, or are just looking for a unique 2-player experience, you have no reason to be on the fence about this one any longer.

With three difficulty levels and a scoring system that always leaves room for improvement, The Fox in the Forest Duet’s longevity cannot be faulted. Even if you get tired of it after a while, you’ll probably look back at it on your shelf at some point and wonder if your gaming skills have leveled up enough to beat your previous high score. 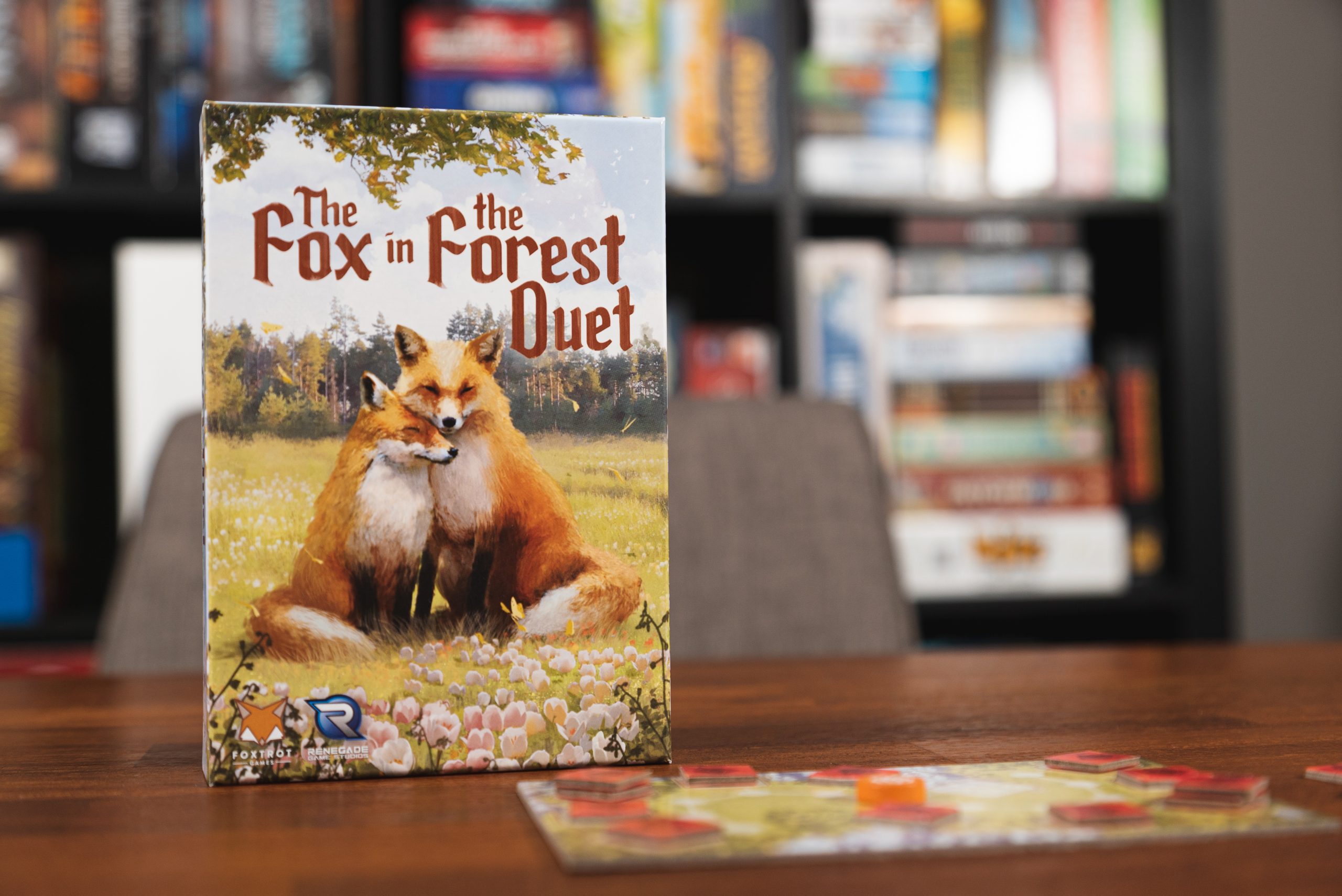 As with all games this small and compact, The Fox in the Forest Duet makes a great travel game. Less ideal than a pure card game for playing on an airplane or train, for example, as the tokens would be all over the place, but you can basically take this anywhere with you.

The Fox in the Forest Duet succeeds where many follow-up offerings fall short, in that it offers a truly different, one-of-a-kind experience, even though it somewhat piggybacks off the original blueprint.

While I don’t think it’ll have the same lasting power as the original, and I wouldn’t call it a classic, there’s a lot to like here. Sure, it might sit on the shelf for a while after you’ve played it a few times, but even if it does, for the price tag, you really can’t go wrong.

Artwork and Components
7
Design
8
Fun Factor
7.5
Value
7.5
7.7
The Fox in the Forest Duet takes a familiar, well-loved design and flips it on its head by turning it into a cooperative affair with firm communication restrictions. This creates tension, and the highs and lows will either drive you crazy or make you and your partner laugh as you look back on where you went wrong and how you can do better next time.
Reader Rating: (0 Rates)
0