The Way of the Bear – Review

This copy of The Way of the Bear was provided by Rio Grande for review purposes and we want to thank them for passing it along.

The aim of The Way of the Bear is to rise up as the new king of the four bear clans. And while this game never quite rises to the occasion of being the king in any one particular category, there’s still a lot to like from this lighter strategy affair. It provides some interesting decisions and, most of the time, just the right amount of randomness to keep things entertaining, but not overwhelming. Though its lack of a deeper level of strategy might turn some people off, for the right crowd, this could be a great entry into the hobby or a less intimidating game to get to the table.

I was pleasantly surprised with the visual side of The Way of the Bear. From the moment you open the box, you’re greeted with beautiful artwork on the inside of the lid, which I haven’t seen in a lot of games. It’s an unnecessary addition, but one I really appreciated and it kicked off my experience with the game on a very positive note.

Likewise, the artwork across the player boards is also distinctively stylized and gives The Way of the Bear its own feel. The board itself, while colourful and still nice to look at, is probably the least appealing component and gets overshadowed once all the tokens and bear steles are added. 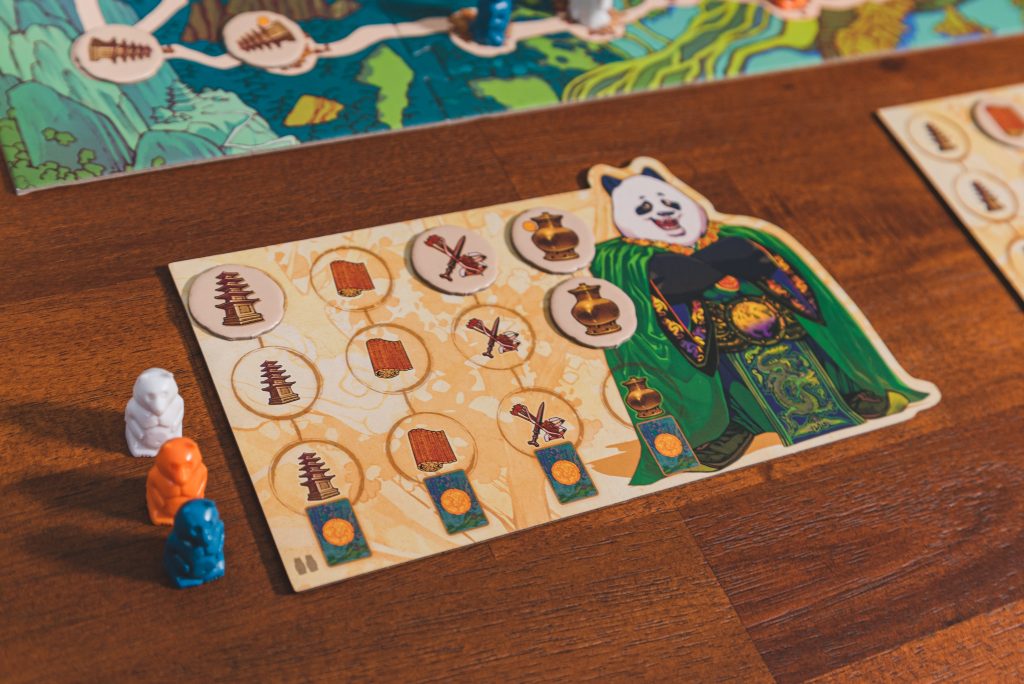 Speaking of the bear steles, there are 84 of them and they are actually pretty solid components. I expected a cheaper quality, given how many there are and the 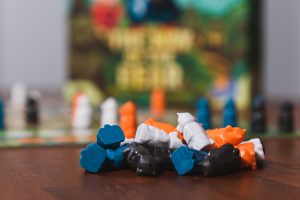 relatively unassuming feeling the game evokes at first glance. However, they have a solid feel and even a little bit of weight to them, increasing the overall value of the game. This is an especially nice surprise considering you’ll be handling the bears constantly, as they are the main component of the game.

The rest of the components are serviceable, but nothing overly special. The cards are what you’d expect and the knowledge tokens are all the same as any cardboard tokens you’d find in other games. Overall, I was really happy with the care given to the aesthetic of The Way of the Bear and it definitely makes it an enjoyable experience to set this game up and play.

The mechanics are rather simple and thus, the game is quite easy to learn and quick to play, meaning you can get this to the table in nearly any situation. Managing which bear steles to take based not only on where you want to place them, but also as a currency to pay to do so, is a nice dichotomy that adds an extra layer of challenge. This is also where the randomness comes in, as sometimes you just won’t get the bear steles you need, which can lead to frustrating turns of just drawing new ones until you can do something with them. However, being able to take from the visible temple tracks alleviates some of this and I rarely found myself completely forced into a different decision based on the bear steles I had available. In fact, sometimes it almost felt a little too easy to figure out what to do next. There are always multiple areas where you can place a new stele on the board and, in general, it’s fairly easy to get the pieces you’re missing to make your next move. I never felt like I was making really tough decisions that could ripple down into subsequent turns, because those decisions just didn’t feel like they had many consequences or much pressure tied to them. Depending on your play style, this could be a pro or a con, but for me, it made my turns too straightforward at times. 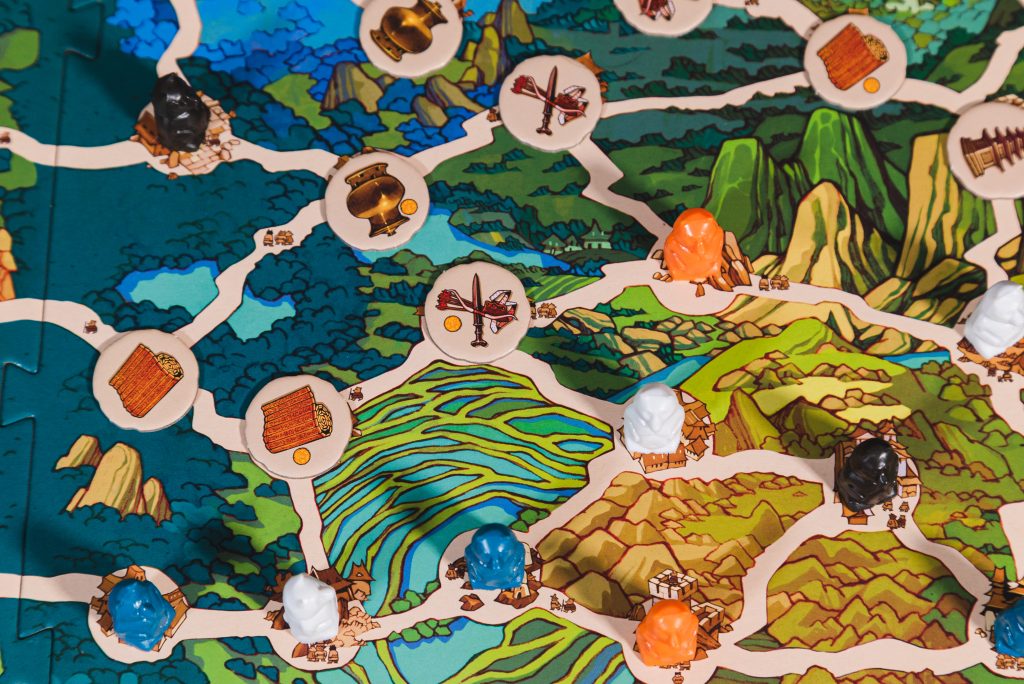 This really illustrates one of my main issues with the game: there’s a distinct lack of meaningful, tactical decisions to be made. I never felt like my choices mattered a whole lot because as long as I kept pace with my opponent(s), which rarely proved challenging, I was generally in a perfectly fine position. The most interesting decisions came from trying to acquire as many dragon seals as possible for the potential tie at the end of the game or, the odd time, making specific tiles more expensive for my opponent(s) if I knew they needed them. Even so, there were always other alternatives on the board so I rarely felt like this really cornered my opponent(s). 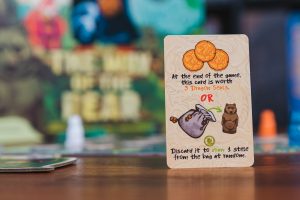 Also, The Way of the Bear so often ends in a tie; the tiebreaker usually feels like more of a regular end-game condition. In other games, ties are rare and usually illustrate just how close the game was. In The Way of the Bear, it never felt like an indication of how close the game was, because generally it’s very easy to keep pace with your opponent(s) and end in a tie. This could very well be a feature meant to provide a more accessible experience to young players by never making anyone feel like they’ve lagged too far behind or lost by a large margin. This potential explanation makes sense, but for more experienced tabletop gamers, it sucks a bit of the interest out of the game.

There’s a distinct lack of meaningful, tactical decisions to be made.

All this being said, this definitely feels like a more family-orientated experience and, in that regard, it’s a great option. While the deeper strategy is missing, the lighter strategy that is present provides some fun moments and serves as a great jumping off point for people new to the hobby or who aren’t ready for larger, more in-depth experiences. However, it’s strange that the recommended age of the game is 14+. This seems like an oversight. I can’t imagine The Way of the Bear being too difficult for anyone the age of 7 or 8 to learn and, in fact, I feel that being accessible to children that age who are interested in board games should be a main selling feature of this game. The 14+ recommendation seems so off when you consider that’s the exact same age range given to A Feast for Odin.

I enjoyed my time with The Way of the Bear more than I thought I would. I tend to gravitate toward heavier, more complex experiences, so I went in expecting to feel unsatisfied by this one. And while on some level that might be true, when looking for a lighter and less imposing option, The Way of the Bear proved to be a very satisfying option. Turns are quick and straightforward, the game doesn’t take very long, and while it’s a bit on the shallow side, the actual gameplay is fun at the surface level and will provide entertainment in the right setting with the right group.

The lighter strategy that is present provides some fun moments and serves as a great jumping off point for people new to the hobby or who aren’t ready for larger, more in-depth experiences.

Plus, even though most games end in an initial tie or close to it, your early games with The Way of the Bear will feel like they have a bit more tension as you try to keep pace with your opponent(s). Only after a few plays will you realize this tends to always be the case without much effort. 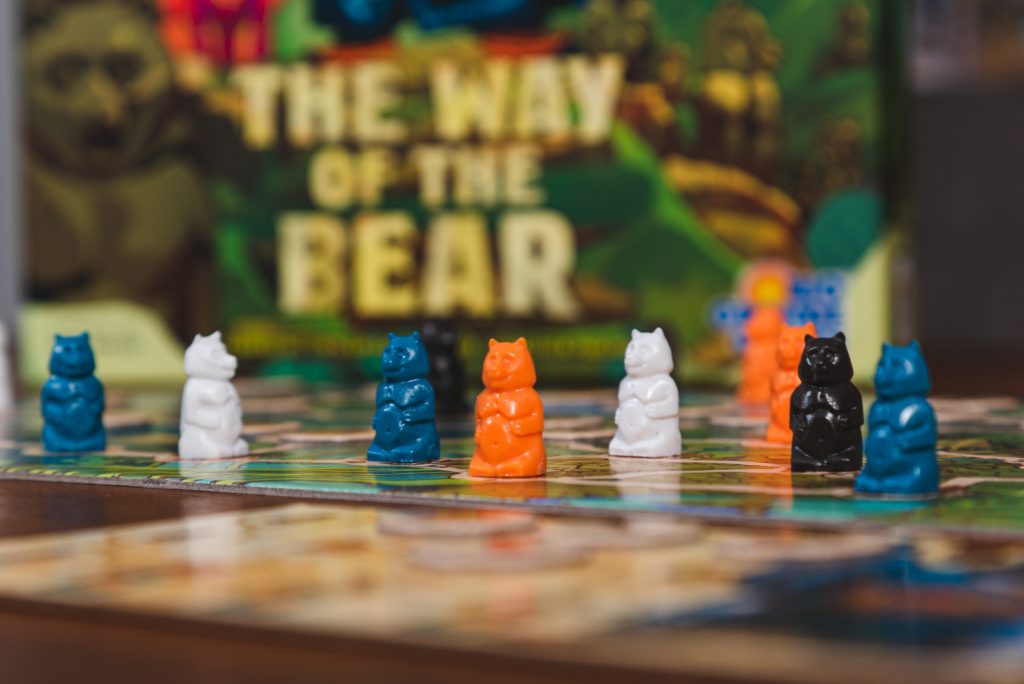 The seal cards you gain for filling columns with tokens also provide a light twist to the mechanics. You’ll find ways to discount costs or move steles on the board. None of the cards are particularly surprising or unique in their abilities and I suspect this was to keep the game accessible, which I understand. However, I can’t help but think of the far more interesting possibilities that could’ve been on these cards which might’ve added some much-needed spice to the recipe. 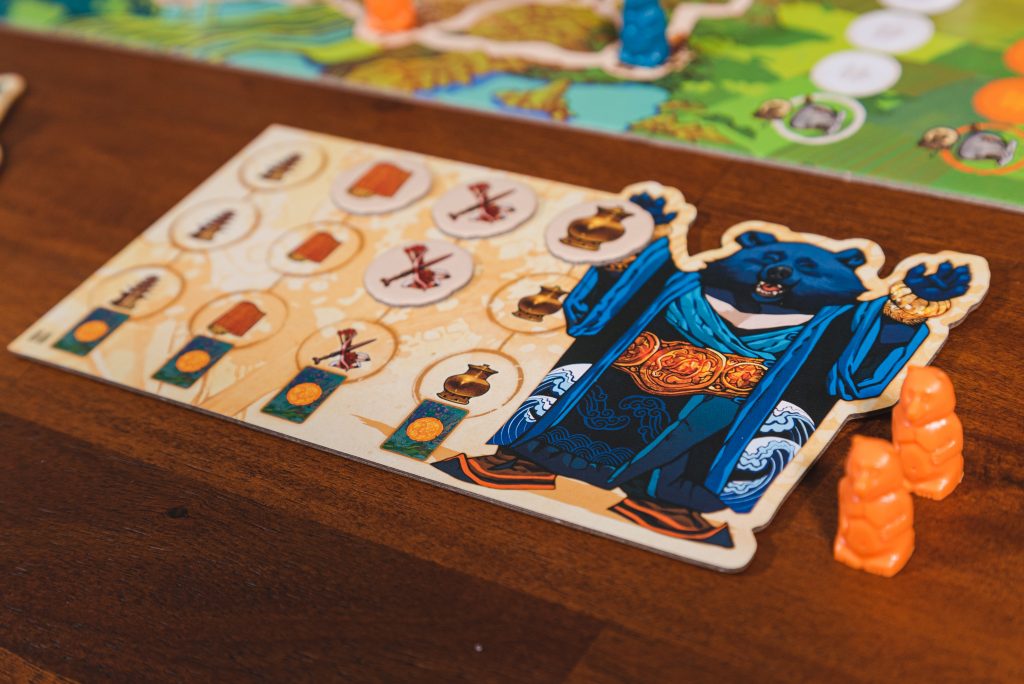 Likewise, I would’ve enjoyed it if each of the player characters had been given their own unique ability or way to set them apart from each other. It would’ve been interesting to try different characters each time and have access to a new play style or ability to make it feel new. As it stands, each game of The Way of the Bear feels pretty similar to the last. Tokens are in different spots and bear steles come out in a different order, but the flow is pretty much the same and the events tend to play out identical to any other session. Had the cards, player characters or any other aspect of the game added in more interesting and surprising mechanical twists, I think I’d be more inclined to return for more plays.

If you come from a family with younger board game fans or people looking for lighter, more accessible options, this is one I could see being a success and one you’ll probably play frequently. You can set it up, play and pack it up in 30 minutes and there’s a lot of enjoyment to be had, even without the deeper strategy.

If you’re already an avid board gamer or you find value and pleasure in making tough decisions, it’s hard to recommend this when there are so many other options out there that offer new experiences each time you play. You’ll know exactly what to expect with The Way of the Bear, and after a while this will probably deter you from playing it as much.

In the end, your mileage here will be entirely dictated by the friends and family you’ll play with, as will your overall enjoyment. 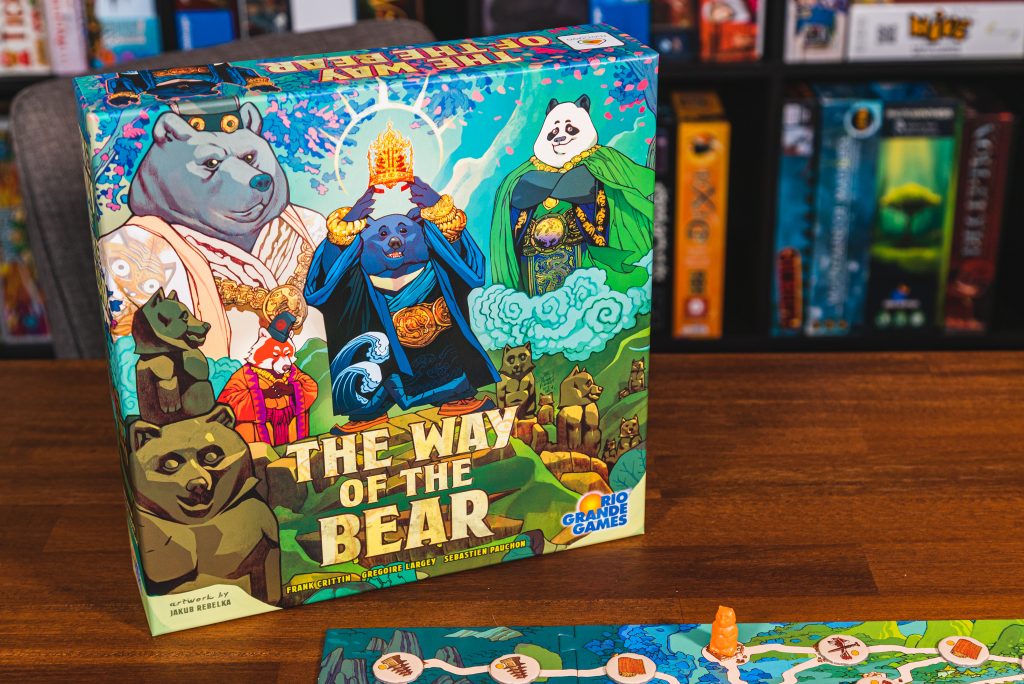 The Way of the Bear was a pleasant surprise in its presentation, visuals and overall component quality. I wish it had been as much of a surprise in the way it played, but I still enjoyed my time with it, as it provides light, quick decision-making that will satiate gamers who might be looking for a more relaxing and less thinky experience. Its lack of a deeper level of strategy, and the way in which most games of The Way of the Bear feel very alike, hold it back from being a mainstay on the shelf.

Ultimately, if you’re looking for a game to introduce to new gamers or to play on a relaxing night at home without having to spend a bunch of time on setup or planning out your turns, The Way of the Bear is a great option and well worth the look.

Artwork and Components
8.5
Design
7
Fun Factor
6.5
Value
7
7
The Way of the Bear provides some great, light family fun that will serve as a perfect jumping off for new tabletop gamers or those looking for a more relaxed, less punishing experience. However, the lack of deep, strategic decision-making may turn off more experienced players. Likewise, games of The Way of the Bear often feel very similar so this didn't have the lasting appeal I was hoping for. That being said, the artwork is very well done and it's still a fun experience worth checking out.
Reader Rating: (0 Rates)
0