Roll-and-write games have come a long way. For many of us, Yahtzee was our introduction to the genre as kids. I went about 20 years without trying another. A couple years ago I jumped back in with Qwixx and I was surprised by how much I enjoyed it. On the surface it seemed simple, yet I was compelled to keep playing and puzzling out ways to improve. It wasn’t long before I tried That’s Pretty Clever and Encore!, just to name a couple. Even though I’ve enjoyed playing all of these, they’ve all felt as though they’ve more or less stayed on a similar path with just enough differences to set them apart.

Welcome To… deviates from that path more than most roll-and-writes, as more of a flip-and-write game that uses a deck of cards to determine available numbers each turn. Some aspects might keep it from feeling quite as addictive as a the tight puzzle of That’s Pretty Clever, but the relatively new designer, Benoit Turpin, deserves a lot of credit for this fresh and thematic addition to the genre.

Whether you appreciate the American 1950s style or not, it’s hard not to feel excited about the prospect of designing your own suburb, and the entire package here looks polished. From the scoring sheets to the minor details on the construction cards and city plans, it seems like every visual aspect of Welcome To… has these little nuggets sprinkled throughout to catch your attention. 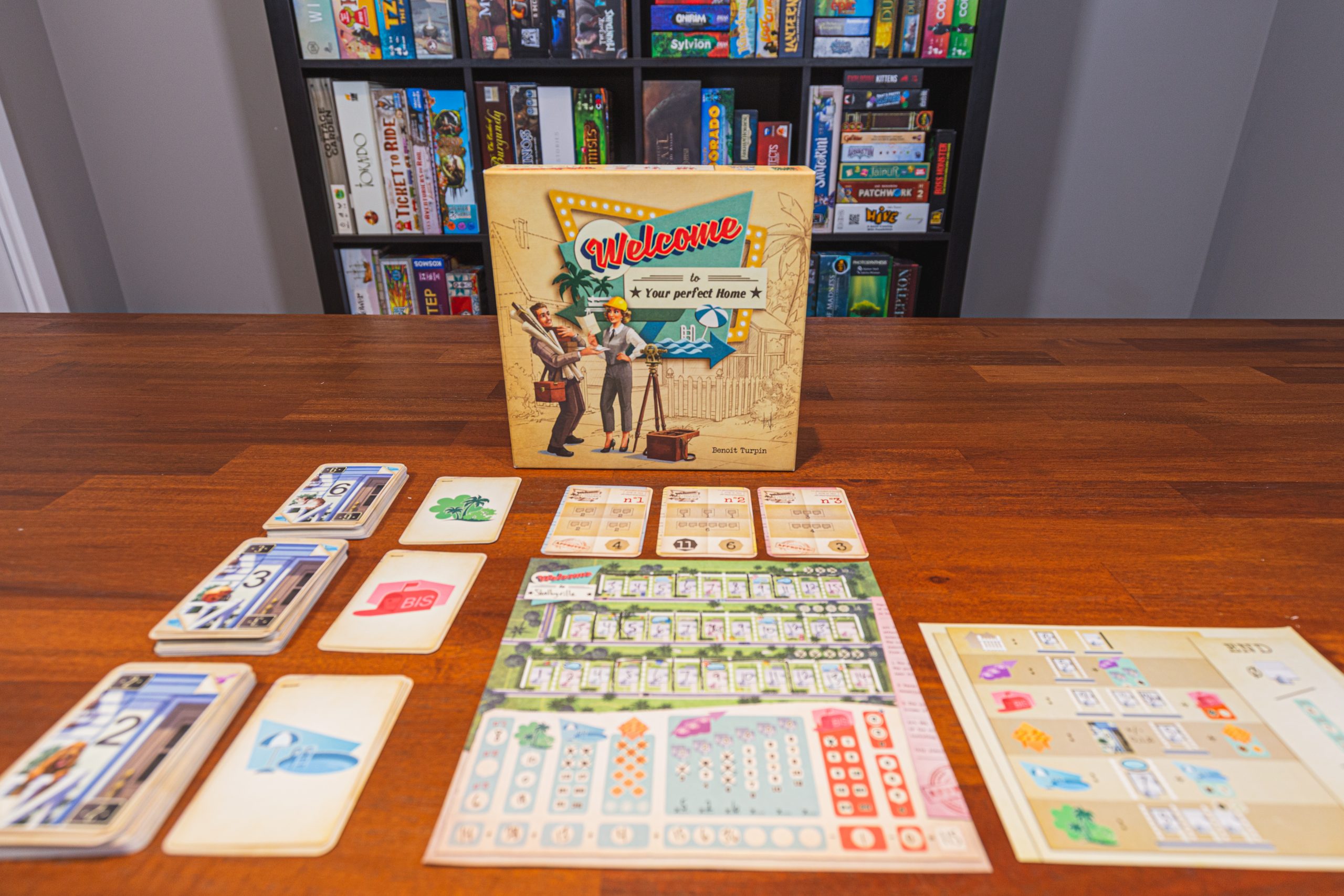 Even though the theme was built in around the core mechanics of the game (you can read more here about designer Benoit Turpin’s process with Welcome To…), it fits surprisingly well and doesn’t feel entirely tacked on. You won’t play this specifically for the theme, but is that ever the case for a roll-and-write? The theme still enhances the play here, and that on its own makes it stand out amongst most other paper-and-pencil games.

The score sheets are really nice and whether you win or lose it’s always satisfying to look at your completed sheet at the end of the game. You can see where you went wrong, compare with your fellow players and you can save all of them to look back on your high scores (my personal best is 115 but my lovely wife holds the all-time high in our group with 120).

Instead of rolling dice, Welcome To… uses a deck of cards that will be drawn from on each turn. This “flip-and-write” style creates a more balanced game. Cards range from 1-15, with 1 and 15 being the rarest, followed by 2 and 14, followed by 3 and 13… and so on until we reach the most common card – 8. Even though you won’t see the numbers you want each turn, it’s tough to criticize this game for bad luck since there are no dice to roll. All players get the same options each turn thanks to the construction card deck and simultaneous play, so Welcome To… rarely gives you much of an excuse to feel unlucky. 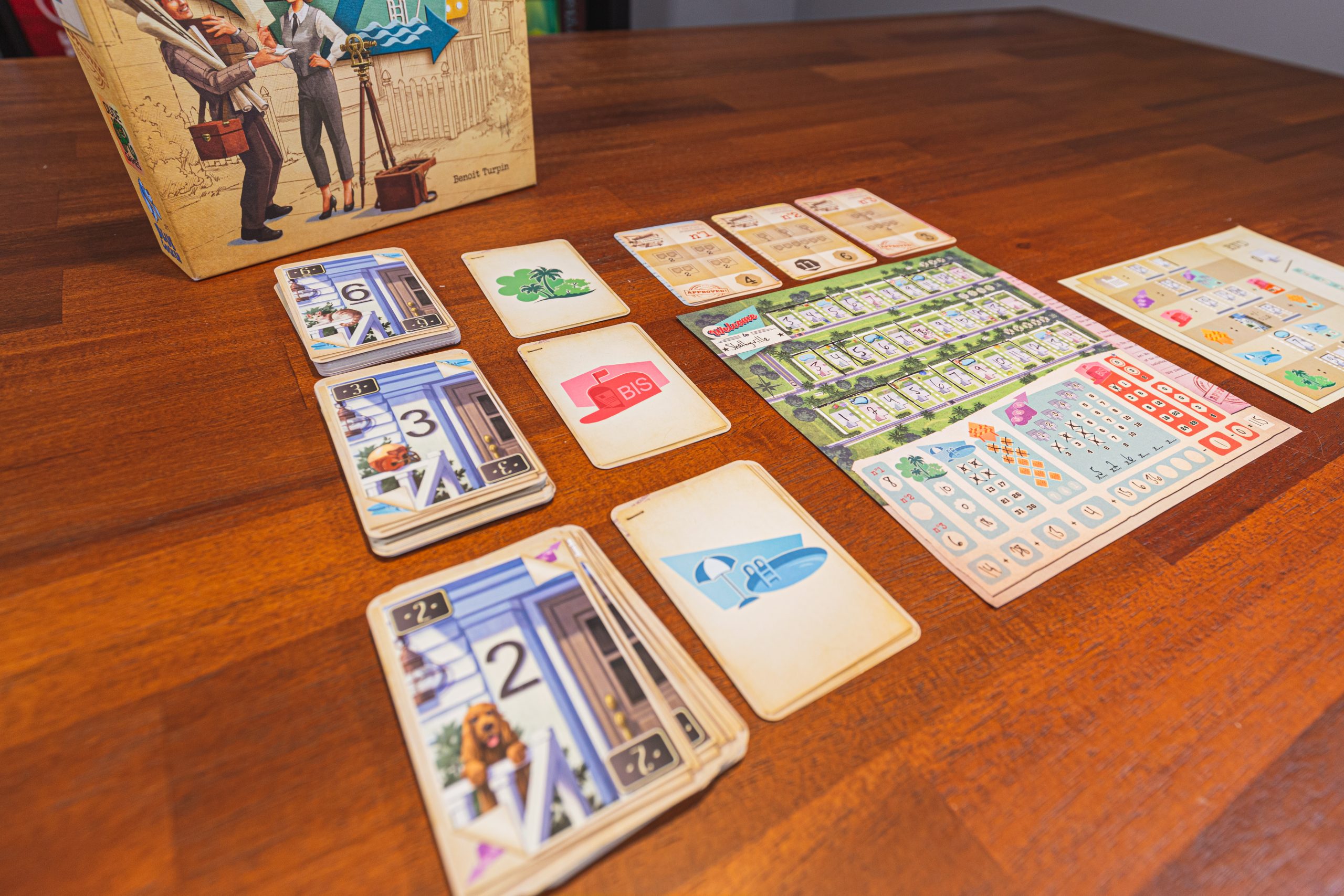 The subtle addition of the little hints to the top corners of the construction cards, almost like dog-eared pages in a book, is brilliant, showing which building bonuses will be on the other side for the next round. This allows players to plan ahead and avoid having as many unproductive turns.

These seemingly simple design choices cleverly elevate Welcome To… from a standard roll-and-write to something special. Less randomness means all players are more likely to achieve what they set out to do throughout the game.

These seemingly simple design choices cleverly elevate Welcome To… from a standard roll-and-write to something special.

Welcome To… truly rewards you for prioritizing one or two specific scoring categories rather than taking the point salad route. For example, the first few pools you construct are worth 3 points each, then 4 points each, and then the last few are worth 5 points each. Similarly, parks and real estate reward you for your long-term investments. The highest scores I’ve seen in Welcome To… are when a player succeeds in prioritizing two or three point categories. 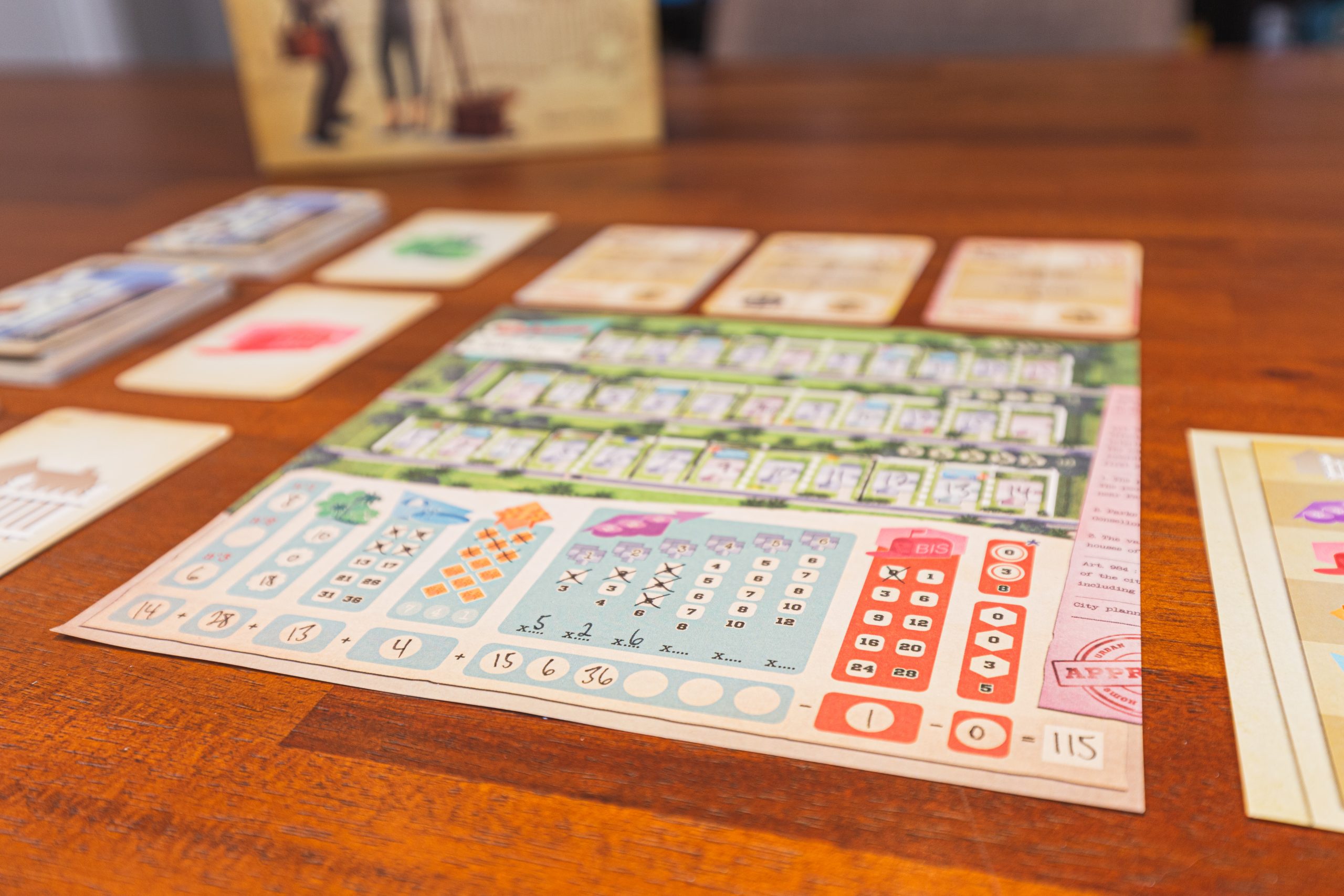 There’s room for developing a more long-term strategy, but you can’t always justify going for a particular strategy right off the bat. The city plans might point you in a particular direction if you see, for example, that 2-house estates are the most common of the displayed city plans, but tactical decisions will need to be made along the way. Do you stick with your long-term strategy at all costs? Do you waver slightly when a better option appears? Do you shift gears entirely and work toward something new when your initial strategy goes astray?

There will be turns where the best choice is fairly straightforward, but most often you’re faced with a few dilemmas that you can look back on later as potential turning points.

The player count seems silly but is fully justified thanks to the deck of cards and simultaneous play. I can’t imagine this will get played in bingo halls, community centres or large University/College classrooms, but the game works in such a way that you’d never truly need to cap the game at a particular player count or leave someone out who wanted to play at a big game night. 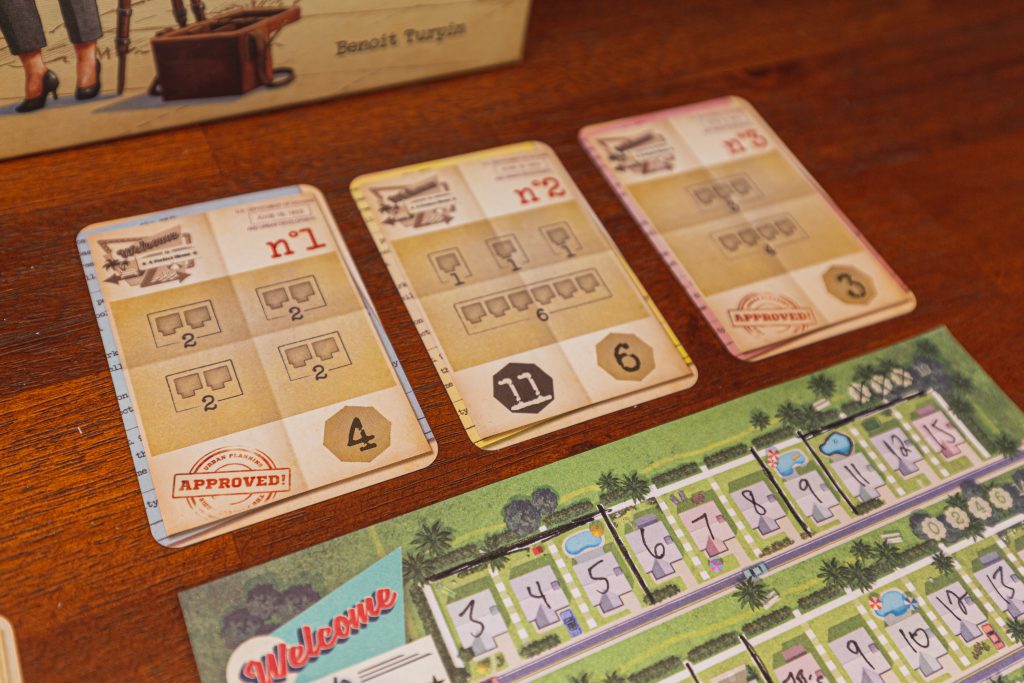 If you’re looking for player interaction in your roll-and-writes, this is one area Welcome To… undoubtedly falls short. Aside from racing to complete city plans for the higher point value, and the end-game conditions that anyone can trigger, players can play the entire game in silence with their heads down. For many, this won’t be an issue, but even some of the less thematic roll-and-writes involve more player interaction as players fight over numbers.

If you’re looking for player interaction in your roll-and-writes, this is one area Welcome To… undoubtedly falls short.

Considering the theme, that choice makes sense. Would an architect try to sabotage another architect’s plans simply for their own glory? Probably not. Many other recent roll-and-writes have specifically added mechanics to increase player interaction, whether they’re mean or not. For me this never took away from the experience of Welcome To… but it’s an important aspect worth mentioning.

Since turns are taken simultaneously, there’s very little downtime, which makes this somewhat silly 1-100 player count actually feel justified. It’s good to have the option to play solo, but it didn’t appeal much to me and I don’t think I’ll ever get that itch, even if the game itself can feel a bit like solitary planning even with players. Who’s supposed to appreciate all my methodical plans if nobody’s there to watch me? It’s always more satisfying to look over everyone’s suburbs in bigger groups as you all compare and think about how you could’ve made your suburb even better. 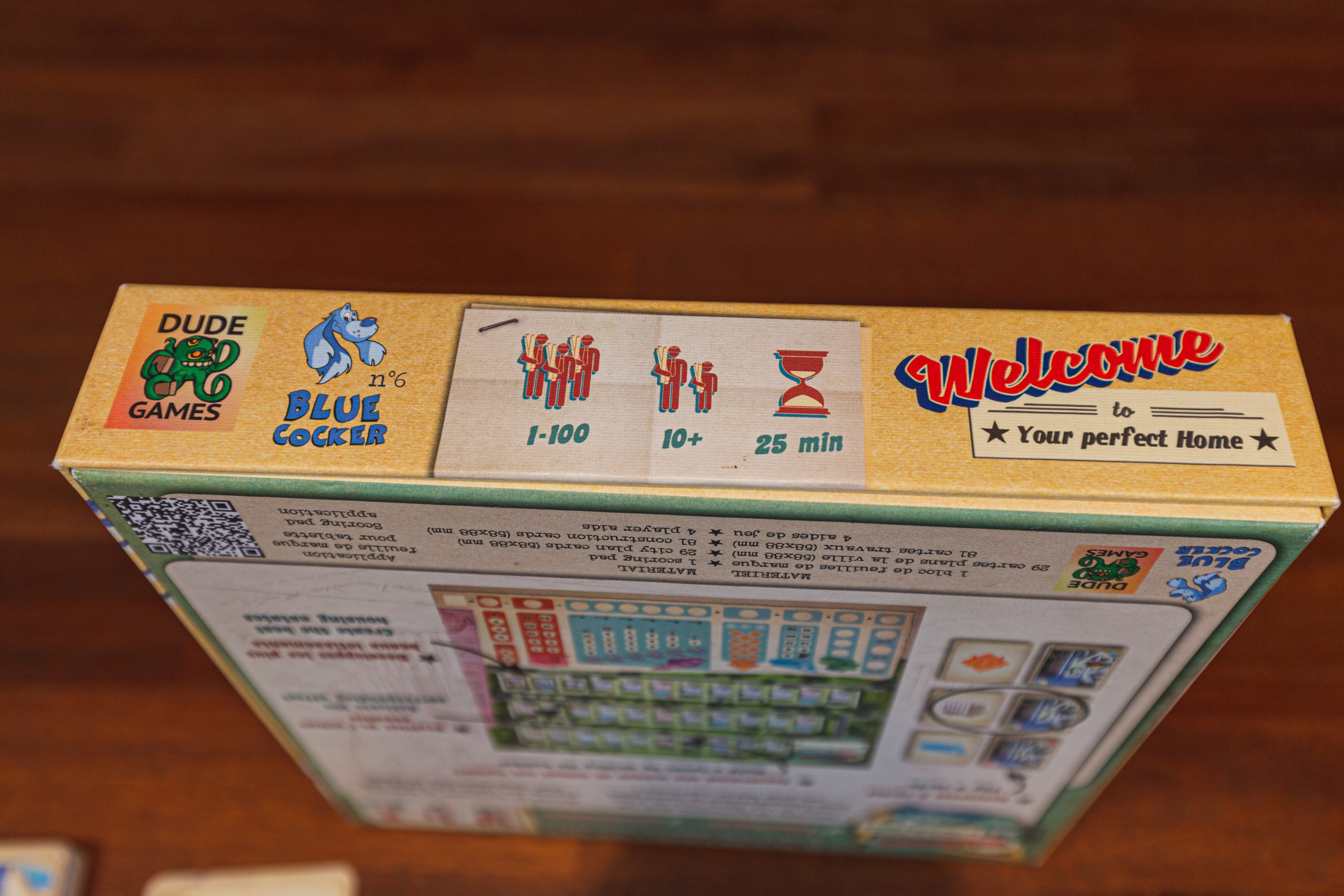 At about 20-30 minutes for an average game, it’s not as quick to play as something like That’s Pretty Clever, so it loses a bit of that addictive itch of wanting to immediately play that “one more quick game”. The theme provides a basis for your goals, and it feels more enjoyable and gratifying than fun, which isn’t a bad thing when you’re testing your long-term planning skills and you don’t want to be disturbed.

Where most roll-and-writes make you feel like you’re dealing with all kinds of luck and simply trying to make the best of it each turn, Welcome To… makes everything easier and more equal for everyone. The rounded edges approach definitely makes this even more accessible, but by getting to do so much of what you want to accomplish each time you play, it loses a bit of that addictive quality that some of the other top roll-and-writes have. 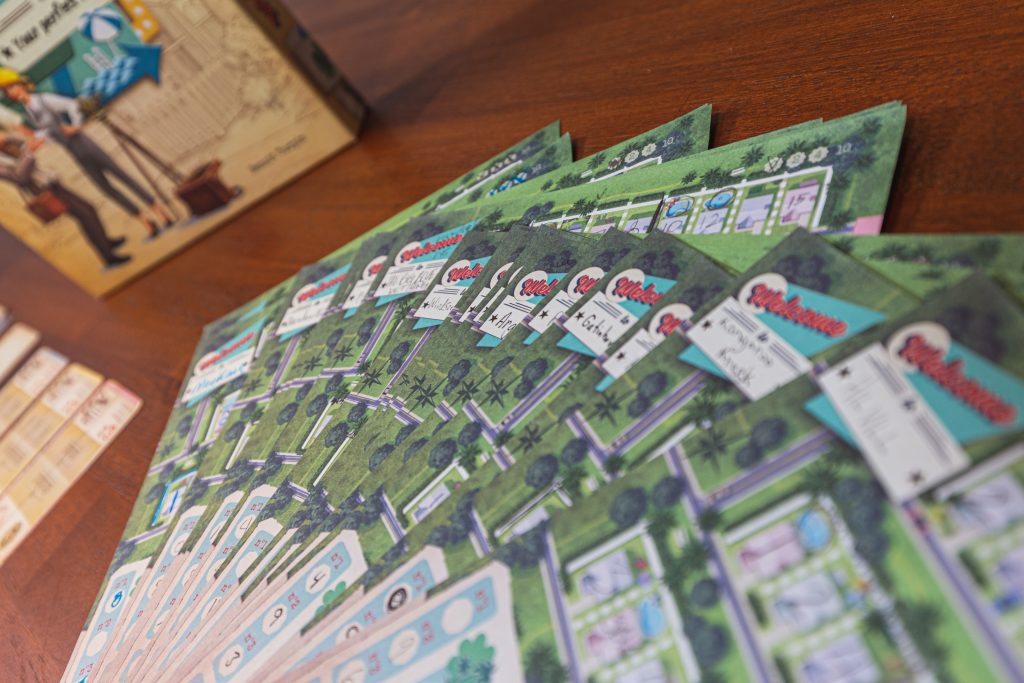 With different city plans, including ones that provide goals not related to estates, along with the expert variant involving roundabouts, Welcome To… offers significant replay value. The thick pad of scoresheets will last you a long time if you’re not always playing in big groups. You can get sheets laminated and simply reuse them with dry erase markers, or even print off additional sheets online if you don’t want to pay for another pad of 100 sheets.

This won’t be a hit with every group and it won’t become your most played game, but those who enjoy it will likely want to play again. I’ve played this with family and friends, many of whom I’ve played it with multiple times since, and it’s always a hit. Even when players lose, they enjoy seeing what they created and don’t feel discouraged to play again.

In an overflowing sea of roll-and-writes nowadays, Welcome To… surfaces above the murky waters to offer a more thematic perspective with big rewards for long-term planning. This is still more of a filler game than a main event at a game night, but it has a lot more going for it than just pretty artwork. If you can get past the lack of player interaction, and you can accept this for being a forgiving, relaxing optimization puzzle that rarely frustrates you, I highly recommend you give this a shot.

Artwork and Components
8.5
Design
8.5
Fun Factor
7
Value
8
8.2
If you’re looking for a roll-and-write game with some theme and less luck than most, Welcome To… is one of the best options you’ll find. The lack of player interaction might not work for everyone, and the game will take longer than most roll-and-writes, but this is an excellent choice to start or end a game night with, or even to use as a gateway to introduce your friends or family to the hobby in a pleasant, low-stress way.
Reader Rating: (0 Rates)
0