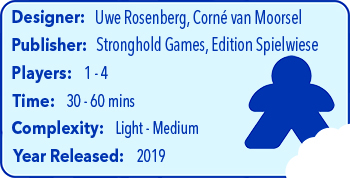 Since 2014’s Patchwork, Uwe Rosenberg’s lighter releases have mostly been polyomino games (you can see my review of Spring Meadow HERE). This time, borrowing the idea of Corné van Moorsel’s 2016 tile-laying game, Habitats, he has designed a satisfying, tricky game that you can play in less than half an hour.

Nova Luna was recently nominated for the Spiel des Jahres, which has seen its popularity increase. Whether it wins or not, it certainly deserves the nomination, as it provides consistently meaningful, difficult choices each turn that reward players for their wise plays.

The artwork fits the abstract nature of the game well, but there isn’t a whole lot more to say about it. Lukas Siegmon could only be expected to do so much with a loose moon theme. Uwe Rosenberg’s games can feel this way thematically, and even though it’ll never stop me from playing one of his games, it’s worth noting the thematic presence of Nova Luna is probably even lower than most of his polyomino games. The quilting theme in Patchwork certainly came through more, as did the gardening theme in Cottage Garden. This might not be an issue for some folks, and personally, theme is often the last category I’d judge an abstract game on. 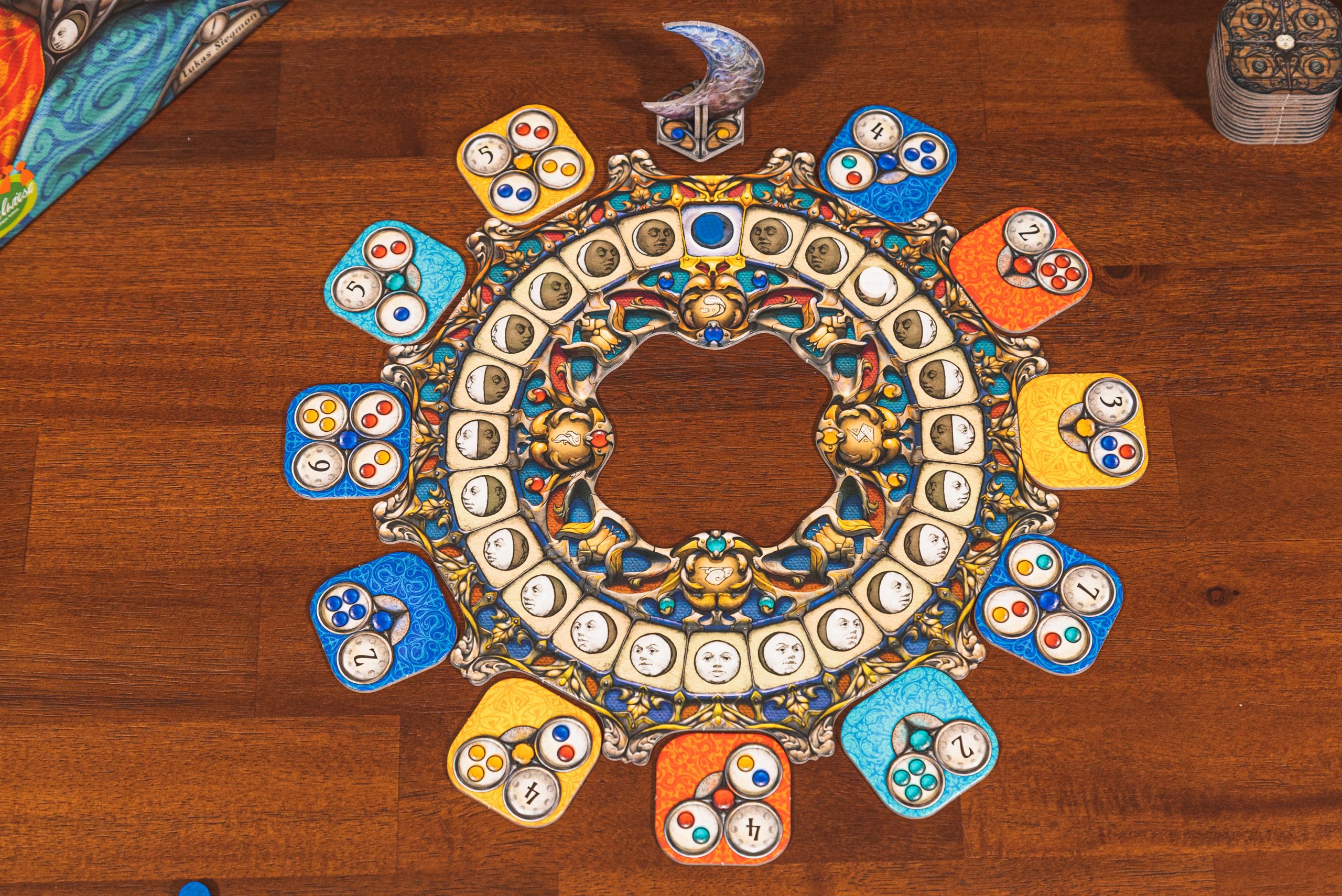 The components are basic and, for the most part, get the job done. The game consists of the tiles, the Moon Wheel, and the Marker, which are all fine, along with the player discs, which are not fine. This box has so much empty space, which I’ll get back to in a moment, and yet the goal discs are inconveniently small. They slip through your fingers easily, and they sometimes spill over when stacking them on a space on the Moon Wheel. The box size is also a bit of a mystery, as about 75% of the box is empty space. I imagine this might be to account for possible expansions, but for anyone who sticks with the base game, this is an unnecessary large box for such minimal components.

Really, everything about the game’s appearance and presentation ranges from subpar to passable, aside from the excellent rulebook, which will have you ready to play within a few short minutes including setup. 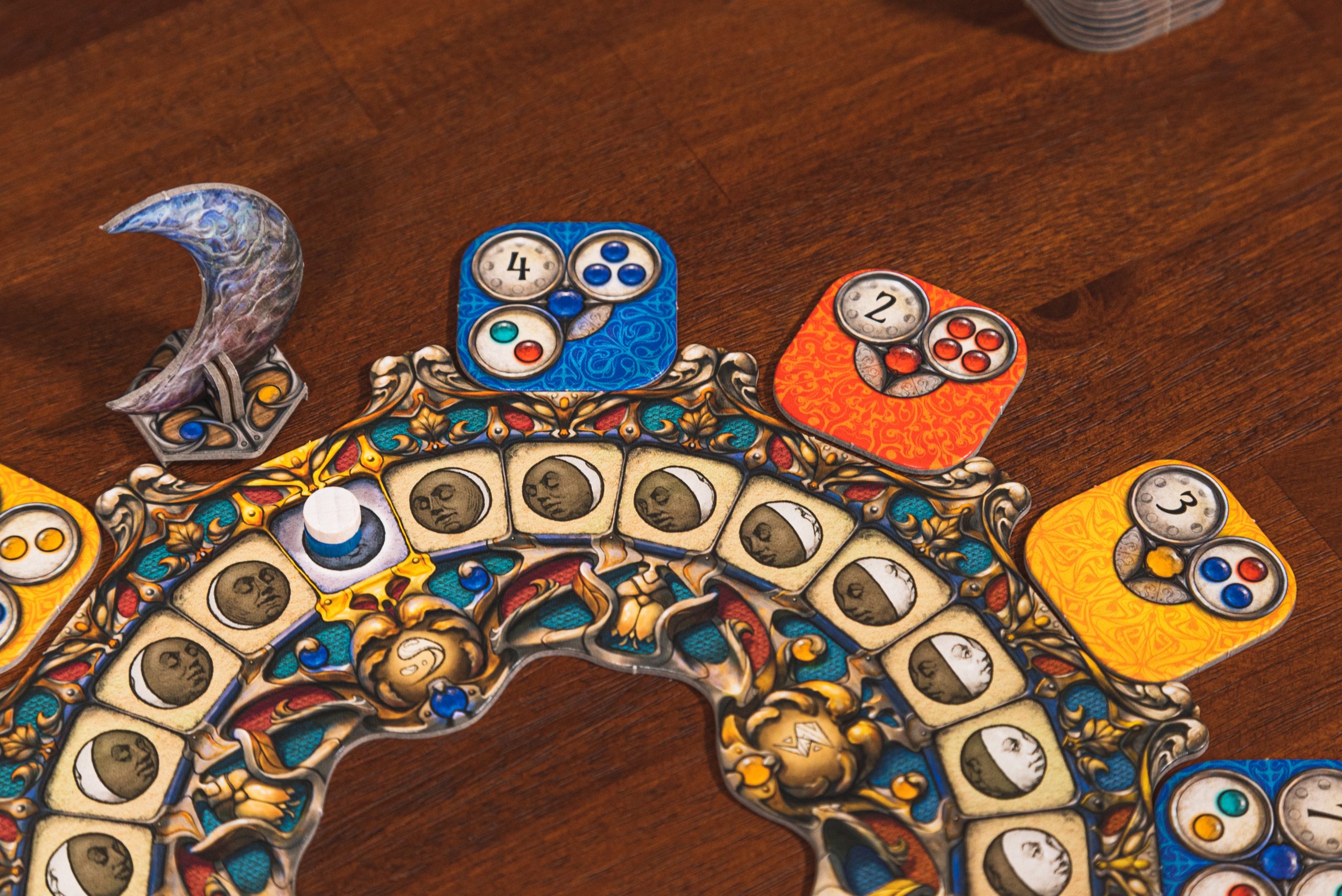 Anyone who has played Patchwork will immediately recognize two familiar elements: the time cost of tiles and the turn order mechanism. In Nova Luna, both work fantastically.

The time cost (1-7) of tiles balances out the goals. All of the 1-cost tiles contain no goals, so they can only be used to complete goals on other tiles. 2-cost tiles have one difficult goal to complete. On the other hand, a 7-cost tile has three goals that can be completed relatively quickly, but you need to decide whether you can spare the time required to move that far ahead and give your opponent(s) that much time to take specific tiles and catch up. The more time you take, the fewer turns you get.

Each turn begins with three choices. Once you select your tile, it’s simply a matter of placing it in the most beneficial spot. Sounds simple, right? Do you prioritize a short term goal or plan for the long game? How far ahead or behind are you right now? Do you have a lot of easy goals left to complete or do you need to start developing more opportunities for easy goals? You’d be surprised how thinky this game can get. 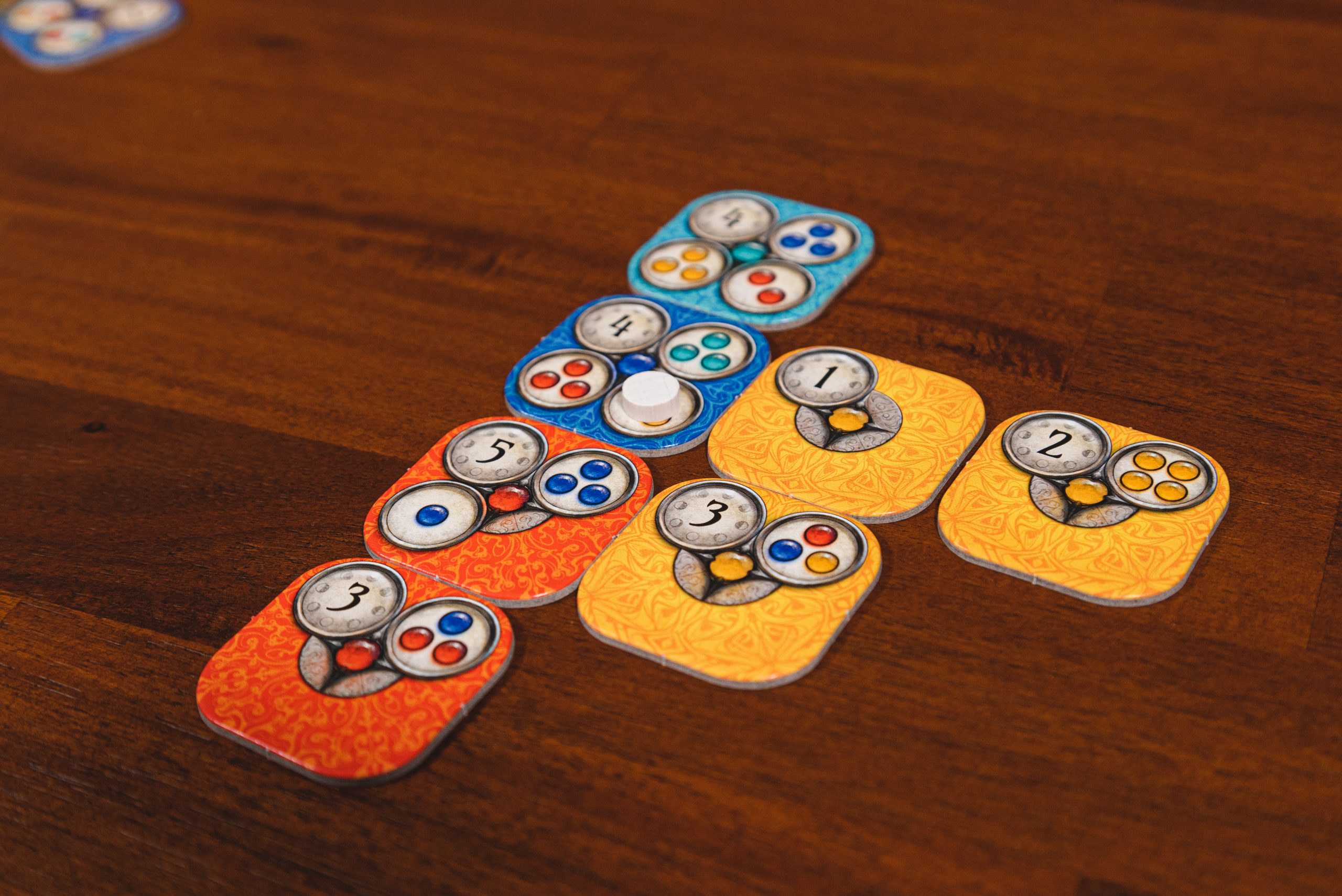 In this case, one of the goals on the orange 5 tile would be completed by having the blue tile above.

It’s quite common to see players agonizing over their decision, knowing they should just finish their turn and let it go, but not wanting to look back soon after and realize they made a mistake. The odd turn might feel obvious and like it plays itself, but for the most part, almost every decision carries substantial weight not only in determining what you get but also what remains for the other players.

Nowadays, most games seem to come down to whoever has the most points wins, and that’s fine, but I really enjoyed Nova Luna’s win condition of completing 20 goals. It’s a race of efficiency to see who can best optimize their decisions both strategically and tactically, and the race to 20 goals ensures that each player understands the importance of keeping up.

The satisfaction of Nova Luna comes from achieving goals in the most efficient way possible. When you place a tile that simultaneously achieves its own goal as well as a goal on an adjacent tile, the game makes you feel smart, but plenty of moments arise that also remind you that you can be more efficient. The game rewards you but is littered with reminders of how many goals you’ve left unachieved or opportunities you’ve potentially squandered, as you stare at your unfinished projects and wonder where you went wrong. 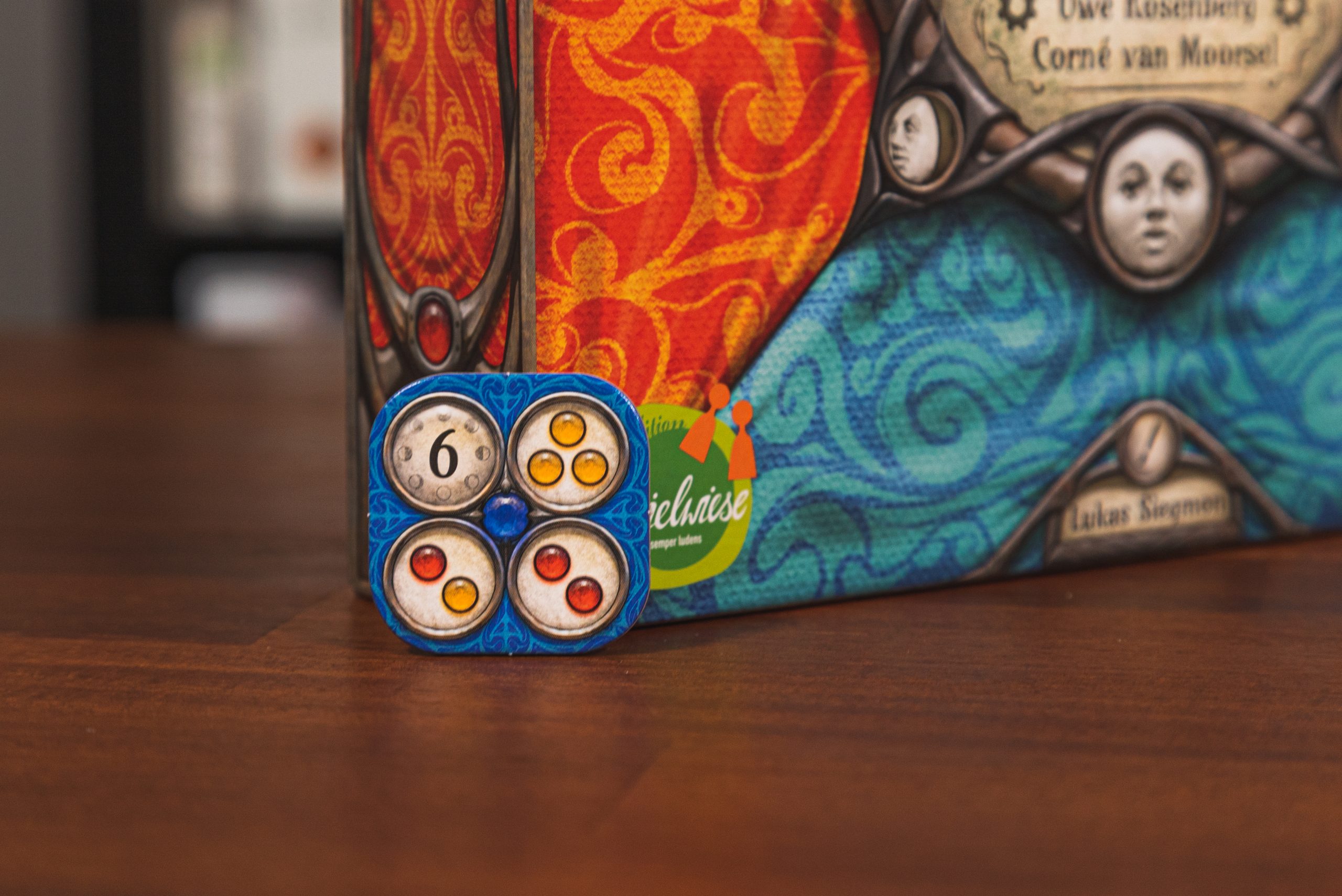 Player interaction in these types of abstract games where everyone builds in their own area usually tends to be low, and Nova Luna doesn’t necessarily change the game in that sense. That being said, the turn order mechanism keeps you aware of your opponents at a higher level than most light games do, and there’s even room for hate drafting if you know a specific tile would just be too good for you to leave for an opponent. Part of what makes Nova Luna fun is that you can play it however you want, whether you prefer to just worry about your own efficiency puzzle or meddle with your opponents. 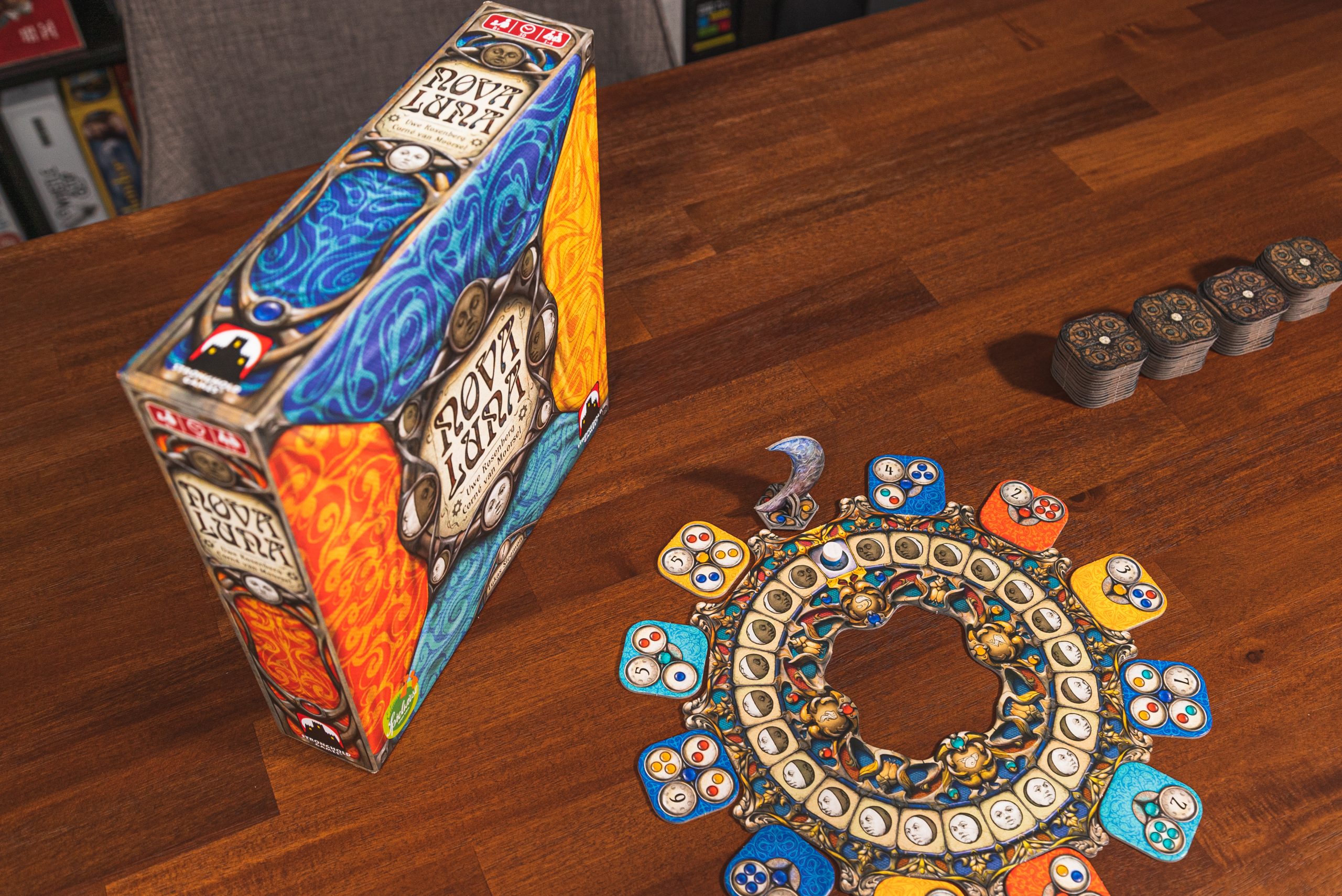 I was fortunate enough to find a copy of Nova Luna online a few months ago, before its Spiel nomination, for around $33 (CAD). Now, it’s listed almost everywhere for $45+, even as high as $50 (US). Despite how much I like Nova Luna, it’s not a $50 game, and I wouldn’t pay that much for it. It’s a shame to see the price bump because a lot of people are going to pass on buying this when they realize it’s a fairly light abstract game with very few components. For what I paid, it’s absolutely excellent value. For what it’s currently priced at, I can’t help but recommend that you wait for it to drop. You can find a meatier game with more replay value for $50 elsewhere. If you can find it at a reasonable price, it’s definitely worth it.

Some people are already clamoring for expansions, and while that could add variety and possibly even longevity to the game, I’m not sure Nova Luna needs that. I don’t expect to play this game to death, so I don’t expect to tire of it any time soon. The base game packs enough of an ever-changing puzzle that feels different at all player counts and can be played with anyone who’s even somewhat open-minded to playing a tabletop game. And, if you have nobody around or are looking for a solo experience, Nova Luna has you covered with a 2-phase version of the regular game that’ll help you sharpen your skills.

Many of Uwe Rosenberg’s heavier designs still stand among his best work, but in recent years, he has shown he can infuse even lighter games with plenty of interesting mechanics and addictive qualities that continue to hit the table. With Nova Luna, he has taken mostly from Habitats and Patchwork to create a clever and compelling design that stands as one of his most widely accessible yet. Even after you’ve seen all it has to offer, you’ll have plenty of reasons to come back to it.

Artwork and Components
7
Design
9
Fun Factor
8
Value
8.5
8.5
Nova Luna isn’t necessarily a standout in terms of innovation, but it takes some familiar mechanics of Corné van Moorsel’s Habitats and Rosenberg’s own Patchwork and combines them into a quick, easy-to-learn tile-laying game for 1-4 players that you can teach anyone. Consider this another perfect example of Rosenberg’s ability, and continuing trend, to dip into lighter games.
Reader Rating: (2 Rates)
8.1